When I go to Vegas I am compelled to go to Cirque du Soleil shows. I’m sure every make up artist out there gets fixated on the spectacular visuals, the sheer majesty of the Cirque shows.

My favorite beyond favorite is Le Reve, which plays at the Wynn. 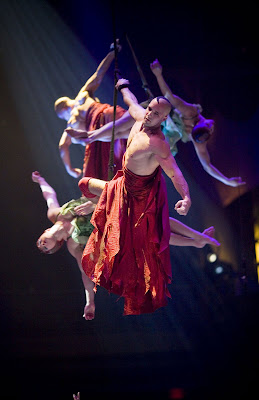 Now technically its not a Cirque production, and is not on the list of Cirque shows, but it was designed for Steve Wynn by Franco Dragone, the creative director of O, Mystere, La Nouba, Quidam and Alegria. Any Cirque fan watching Le Reve would be hard pressed to tell its not a Cirque du Soleil performance, if indeed there is a way to tell?

Like O, Reve happens in water. 1 million gallons of it, to be precise. The story line follows a series of dreams, with some of the most astounding acrobatics, dance and theatrics you’ll ever witness, and indeed feel a part of. The theatre is in the round, seats approximately 2000, with no one further than 40 feet away from the action.
Because it is in the round, there is no “backstage”. The sets, and for the most part the performers themselves, either appear from the depths of the water, or soar in from above.
The stages raise and descend seemingly in mere seconds. A performer will run clear across the surface of the pool, and a heartbeat later another will dive from 40 feet high straight into the water, leaving your heart somewhere near your throat.

It takes 175 technicians and crew to support the 68 performers.

The make up artist in me is in awe of the fabrics used in the costumes, especially the red dresses. The girls will perform water ballets, then climb out and dance on the edge of the pool, their skirts swinging with their moves as if dry. (It should be noted that they dance and swim in red heels!) All the costuming is spectacular. 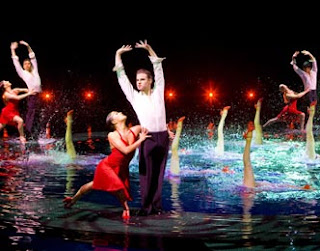 No matter how many production stills and videos I watch, none really do justice to Le Reve. I’ve included a couple of you tube clips to give you some of the flavor of this genius show, but there is no comparison to actually being there and experiencing it live. 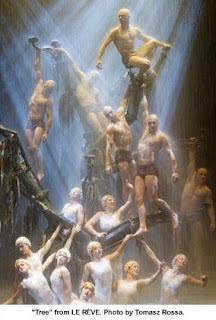 For some reason these aren’t linking, but you can always check them out at www.youtube.com

Have a beautiful weekend!