After I went to last year’s Prelude to the Dream, I really got into dirt track racing. Who saw that coming? – not me!!! I had never enjoyed dirty, dusty, loud racetracks before (well, truth be told, I’d never even considered going to one before…), but here was this fun new thing to go and do.

In Phoenix we had a fantastic dirt track called Manzanita Speedway. It had been around since the early 1900’s, and since the 1950’s had been used for dirt track car races.
It was one of those great old venues with big old wooden stands to sit in, all ambience and atmosphere and tradition. It was the perfect place to take my 8 year old every weekend. Inexpensive, loud, boy fun. It seemed that every weekend the same cast of characters would be there. We’d sit in approximately the same seats near turn four every time, and got to know all the other families, who would sit in their same seats too.

All the little boys would tear down and watch from the wall, hooting and hollering and waving their checkered flags at the cars. We had no clue who the drivers were, so would just randomly pick cars to cheer for while they were running hot laps. That in itself would be hysterically funny. Typically everyone is cheering on the hot favorite or the family member, but we always wound up with the cars that only had 3 other fans (or none at all), and we’d support them with all the crazy enthusiasm that everyone else used.
My car frequently got lapped by all the others, and would limp back to the pit wounded, but I would still be cheering him on valiantly! 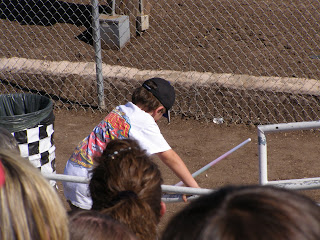 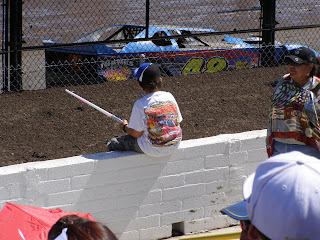 a Cruz pedregon t-shirt, a light saber, and the late mods – what else could a boy want?

Manzy was one of those places where you just throw on a baseball cap and your jeans – totally low key. The kids would have hotdogs and cokes, and to a foreigner (me!) it just seemed to be a really fantastic slice of americana, and absolutely the stuff that memories are made of.

And then, out of nowhere, they up and sold it. Just like that. We were devastated!
All the fun ended on Easter Sunday, with our two favorites, late models and sprint cars. 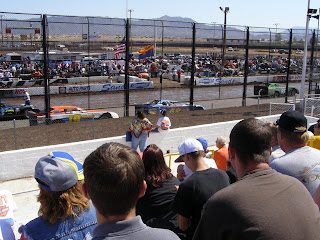 Every weekend we still miss Manzy. I haven’t found another cool place to watch the dirt cars run out here.

So if you ever get the opportunity to go to a dirt track, jump all over it. You’ll meet the nicest people, have no end of fun, and create some really great memories along the way 🙂