So here are some more images from Sunday’s shoot. 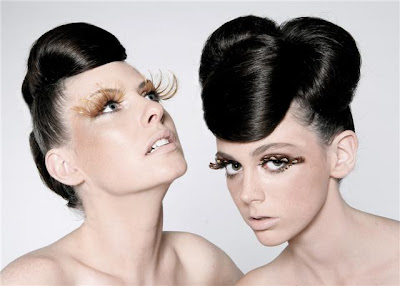 It’s actually incredibly difficult to wear these big lashes. They’re very heavy on the eyelid so there’s considerable work involved when modelling them. 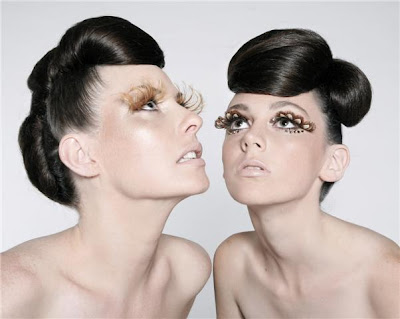 Also you can’t glue them along the lash line as they are so wide it makes the eye look like its turning downward. So, they are glued on an angle up to the orbital bone. Quite uncomfortable, but with this calibre of model you’d never know it…

Shooting them is tricky too, because if the faces and eyelids aren’t at exactly the right angle, it’s all just a blurry mess. 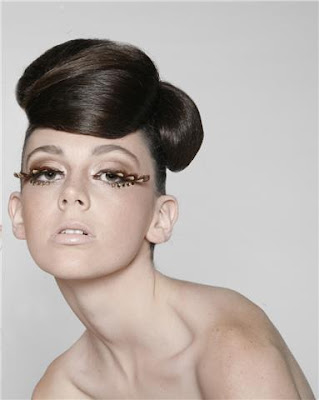 Lovely Lea! In between shots she was singing for us. She is so chilled out, she’ll just pick up her guitar and rip out some cool songs, then slip back under the lights and give you something like this!

It’s really fun to be along for the ride as a huge music career is growing. The record company, management company, PR company & all the powers that be have to restrict how much info can be given out, but as much as possible I’ll give you sneak peeks into the behind the scenes action with Lea.
It’s all very, very cool.

Lastly, I hope you can see this shot. It is actually hair diva Kristin Isaac’s myspace profile picture, as is funnier than all get out! She is in a parking lot makeing her boyfriend kiss her boot, and she is sparking some fierce attitude!!!

I love that crazy girl!!!

Well, I’m off to wardrobe fittings for the next makeup segment that we’re shooting, which is supposed to be on Thursday.

Please don’t let it be the chaps…