So how was your Christmas/Hannukah/Kwanzaa/whatever you celebrate? My clan are Christmas celebrators, and we had a good one.
It has been so nice to finally get a break and just stop. One of the things I love about the Christmas break is curling up on the couch with a good book.

I do believe the book I just finished (minutes ago!) is essential reading right now for all females living in the west. 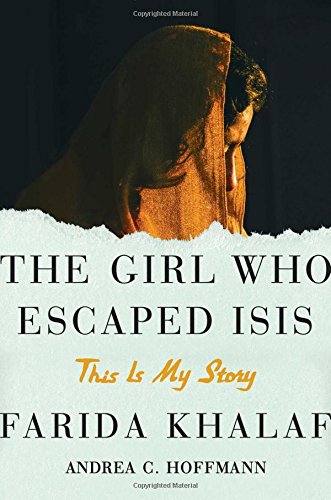 The Girl Who Escaped ISIS: This Is My Story

by Farida Khalaf is an incredibly important book.

On some level I think that we in the west, with our comfortable lives, our busy lives filled with work stress, our exhausting lives, our complicated lives, our simple lives, we don’t really connect to the absolute horror of what is happening to women in other parts of the world.
We see the reports of women being taken by ISIS and sold into slavery and sexual abuse and we find it awful and offensive, but the actual reality of the lives and communities that are destroyed, the devastating reality of what actually happens, doesn’t necessarily hit our stream of consciousness.

Farida Khalaf is a Yazidi girl from northern Iraq. She excelled at school, particularly in mathematics, and had been thrilled at the prospect of becoming a math teacher when she finished school.
She was close to her parents and siblings. She had friends and relatives and a strong community living all around her.
Farida and her family were living a lovely, normal life.

And then in the late summer of 2014 ISIS attacked her village.
All the men and many of the boys were taken and killed in the school yard, and the girls were taken and sold into slavery.
The 9 and 10 year olds fetching the highest prices. (Let that sit with you for a minute.)

Farida was transported and held in a slave market in Syria, from where she was sold and resold to ISIS soldiers, over and over, brutalized to near death, then eventually sold to an ISIS camp in the middle of the desert.

Farida tells her story in devastating yet crucial detail. Somehow despite soul crushing abuse and torture she is able to maintain her resilience, find hope, and ultimately plan and execute an against all odds escape for both herself and 5 of the other girls held captive with her.
Her bravery should inspire you. And devastate you.

Freedom has it’s burdens for Farida too. The girls who do make it to the relative safety of refugee camps are shamed for having lost their virtue. They have to deal with sexually transmitted diseases and pregnancies and the trauma of what has happened to them.

There are multiple reasons to read this book.
This memoir lets Farida make sure that what happened to her was not for nothing. It is a way for her to make you see what ISIS really is, and to let them know they didn’t break her spirit.
It is a way for you to see what is happening over there and to find a way to help.

You need to read this book.

“As gripping as it is appalling…a compelling testament to the suffering of ordinary people caught up in violence far beyond their control—and to the particularly terrible price it exacts from women.” —The Guardian