This just arrived in my inbox from Afar.com.

It’s summer, so there is another new travel alert from the State Department. Afar.com have looked at it and have some advice for you. I am always vigilant when traveling, don’t take risks, but at the same time make sure the focus is on enjoying myself. It is always a good idea to have travel insurance, and to read carefully through your policy so that you know ahead of time what their coverage is in the event of a natural disaster, terror attack, or outbreak of war.

Read this article, share it with your euro-traveling peeps, and happy travels my friends! 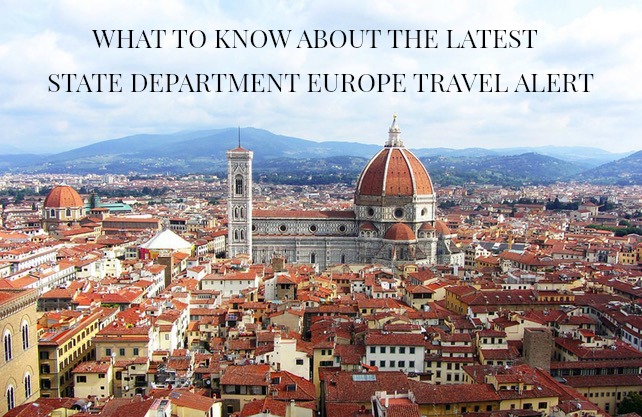 What to Know About the Latest Europe Travel Alert

The arrival of a new month brought with it the return of a familiar obstacle to international travel: a new travel alert from the U.S. State Department.

This alert, issued early Monday, pertains to all U.S. citizens traveling to Europe and lasts through the summer. The reason? A continued threat of terror attacks. According to a report from CNN, the alert specifically called out recent incidents in France, Russia, Sweden, and the United Kingdom as reasons for concern.

While the alert doesn’t cite intelligence suggesting an attack is imminent, it expressed general concern about the possibility of other attacks. “The Department remains concerned about the potential for future terrorist attacks,” it read. “U.S. citizens should always be alert to the possibility that terrorist sympathizers or self-radicalized extremists may conduct attacks with little or no warning.”

The alert went on to say malls, government facilities, hotels, clubs, restaurants, places of worship, parks, airports, and other locations all are possible targets for attacks. In other words, terrorists can attack any place at any time.

While terrorism is serious business, it’s important to note that Europe travel alerts are not new.

A story in the Washington Post indicates this is the fourth travel alert for Europe in the past year, with the most recent one going out before the Christmas holidays and expiring in February. A different piece, also on CNN, noted that the State Department issued a similar warning right around this time last year in advance of the European Soccer Championship in France.

Alerts themselves don’t really mean much for travelers—just a call to be more vigilant and understand the risks associated with visiting a particular place at a particular time.

In this case, the most recent alert urged U.S. citizens traveling to Europe to check the websites of U.S. embassies and consulates for security messages, keep in touch with friends and family, and check local media for updates at the destination. The State Department also encourages travelers to sign up for its Smart Traveler Enrollment Program to receive security messages in the event of an emergency.