This week I’m looking at unusual things to do in Rome. Or maybe just things you didn’t know about or possibly forgot about.

Rome has so many layers and textures (literally!) and most tourists to the city completely miss them.

After visiting the Teatro Marcello in yesterday’s post, today we are going to walk to the other side of it and into one of the coolest, chicest neighborhoods in town, the Jewish Ghetto. 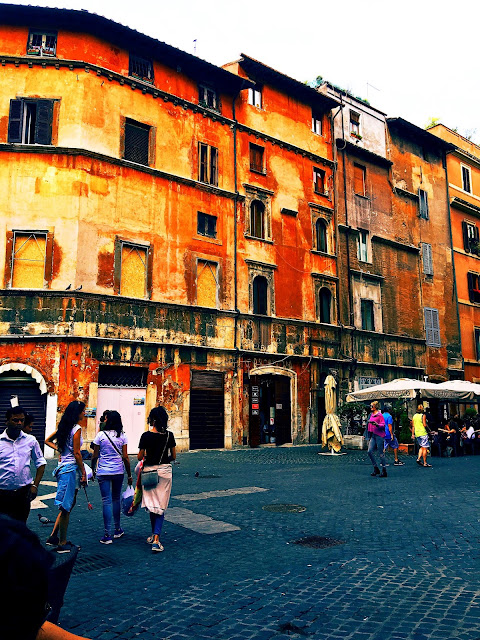 On the other side of the Teatro Marcello is the Jewish Ghetto. The Jewish community has a fascinating history in Rome. They lived in Rome pre Christianity, and by most accounts were well respected. The Jewish people lived separated from the heart of Rome in my neighborhood, the Trastevere. (meaning across the Tiber river).

In 1555 Pope Paul IV sent down a Papal Bull requiring the Jews of Rome to be moved into a walled and gated area now known as the ghetto. They were locked in at night and released to work in the mornings. Between 2000 and 3500 were initially sequestered there in deplorable conditions.

Now the area is super vibey and cool. Although still a tiny landmass it is a fantastic area to explore and to dine.

World famous for it’s carciofi (artichokes) served at every restaurant, the Jewish Ghetto is the perfect place to stop for lunch, an early evening aperitif or for dinner.

I love lunching at Ba’ Ghetto and at Nonna Betta. Try the Jewish Carciofi (deep fried) and the Roman Carciofi (boiled and served with a sauce on top.)

Although once impoverished this area is now super expensive, with apartment prices so expensive that very few can afford to live here.

The photo above was taken late afternoon on a Saturday. Not even 5 minutes walk from thousands of tourists, it was low key and chill, and there were open tables to sit and enjoy a late afternoon spritz and have a snack.

Another thing I love about the Jewish Ghetto in Rome is that it has guards at the Teatro Marcello end, who by default keep all the immigrant street vendors from coming in and badgering you to buy selfie sticks and cheap sunglasses. Here you are basically just hanging with the super-chic, cool locals.