For more than 300 years the Medici family ruled or ran the city of Florence.

They were bankers, politicians and the world’s most prolific patrons of the arts. From the architecture of Florence to the art that fills the city everywhere you turn, the Medici’s impact on the city and on the world of art will last for centuries after you and I are gone.

The Medici had numerous cardinals in the family as well as two popes. In 1513 Giovanni de’ Medici became Pope Leo X and in 1523 his cousin Giulio di Giuliano de’ Medici became Pope Clement VII. The family came from modest means but elevated themselves to becoming the hereditary Dukes of Florence then in 1569 Pope Pius V made Duke Cosimo I de’ Medici Grand Duke of Tuscany.

With centuries of drama, intrigue, assassinations and slick political maneuvering, this is one fascinating family.

One way to avoid the crowds in Florence is to take yourself on a walking tour of the Medici Palaces. I have found that my Glam Italia tour groups who have watched The Medici on Netflix get a huge thrill out of doing this. The palace we stay in in Florence is opposite the Medici-Riccardi palace, built by Cosimo the Elder and home to all our favorite Medici (Cosimo, Lorenzo the Magnificent, Cosimo I). At night we look across into the Medici palace and see all the frescoes on the ceilings lit up, invisible during the day.

Our story starts with Cosimo de’ Medici, known as Cosimo the Elder. He married the daughter of a noble family, Contessina de’ Bardi. They lived in the Bardi palace across town but when Cosimo came back to Florence from exile in 1444, newly empowered he decided to build his own palace.

At that time you just built onto existing medieval buildings, but Cosimo had a different idea. He acquired the property diagonally opposite the Basilica San Lorenzo and razed the existing building to the ground. His Michelozzo designed Medici Palace was the first true Renaissance building.

The fortress like exterior with its rough hewn blocks on the first level, evolving into smoother stone on the second and third level was considered grand and quite ostentatious at the time but became the prototype for all the Renaissance palaces in Florence from then forward.

The lovely courtyard with its beautiful garden was the original home of Donatello’s controversial statue of David (now in the Bargello). As you walk through the garden to the inner courtyard, imagine more than a hundred years of Popes, foreign dignitaries, important political figures along with the greatest artist and philosophers of the time all walking these same steps as you!

The palace was home to the Medici until Cosimo I moved to the Palazzo Vecchio. Minor members of the Medici family lived there from then until 1659 when Ferdinando II de’ Medici sold it to the Marquis Gabriello Riccardi.

It is now a museum. Highlights include the Riccardi family collection of marble, the Magi Chapel and the Giordano Gallery.

Also of interest, Lorenzo the Magnificent moved the young Michelangelo into the Medici Palace and raised him as his own. For 3 years Michelangelo lived as a brother to the 2 Medici popes, was educated with them, ate meals not only with the family but also the greatest minds of the time. Lorenzo created a world for Michelangelo where he not only benefitted from life at the Medici court but also had freedom and opportunity to rise to his full potential as an artist.

Address: The Medici Palace is on the corner of via dei Ginori and via Cavour, diagonally opposite Basilica San Lorenzo

In 1540 Duke Cosimo I de’ Medici moved his family from the Medici Palace into the Palazzo della Signoria, now called the Palazzo Vecchio. This is the castle-like building in the Piazza della Signoria with the replica statue of David outside.

He hired Giorgio Vasari to decorate the inner courtyard and the sumptuous Salon of 500. Cosimo I centralized all the government offices into a new building next door named the Uffizi, or offices. He had Vasari build a passageway that he could walk through from his next home, the Pitti Palace to the Palazzo Vecchio. This is now called the Vasari Corridor.

The palace is still Florence’s City Hall but is also a museum. I recommend taking a tour of Palazzo Vecchio, my favorite being the Secret Passages Tour which combines seeing the secret rooms and yes, the secret passages, with a visit to the Salon of 500, the rafters above the Salon of 500 and ends at the Medici apartments. The tour is tremendous and gives fascinating insight into the lives of the Medici.

Cosimo I was very happily married to a Spanish blue-blood, Eleanora of Toledo. To Eleanora the palace seemed small and provincial, nowhere near grand enough for someone of her stature to be raising her family, so she bought the biggest private palace, the Pitti Palace, and moved the family in there.

At the time the Pitti Palace was only the center section of the current structure. Luca Pitti ran out of money and died in 1472 before construction was finished. In 1459 Eleanora bought the Pitti Palace and expanded it to its current size. The gardens behind the palace, the Boboli Gardens, were the inspiration for the gardens at Versailles.

The Pitti Palace became the Medici family home until the dynasty ran out of heirs. It was then the home of the new rulers of Florence, the Lorraine-Habsburgs.

The Pitti Palace is now Florence’s largest museum. It is actually a series of museums, with the Medici private art collection, the History of Costume Museum, Porcelain Museum and Silver Museum. Unlike the Uffizi across the river which is perpetually packed with tourists the Pitti gets vastly fewer and is wonderful to explore.

Are you planing a trip to Florence? My free Secret Florence PDF tells you my favorite restaurants, bars, shops and under the radar secrets of fabulous things to do in the Renaissance city, Download your copy HERE

Could UFO’s have been flying over Renaissance Italy?

There is a little extraterrestrial intrigue at the Palazzo Vecchio in the historic heart of beautiful Florence. Up on the top floor of the palace in the Hall of Hercules there is a large tondo (circular frame with the painting inside) measuring about one meter across, featuring the Madonna and Child with St John the Baptist.

It’s quite lovely, right? But there may just be a little more to this painting than meets the eye. We don’t know exactly who painted it. It has alternately been attributed to Tondo Miller, Bastiano Mainardi and Arcangelo di Jacopo del Sellaio but no one seems to know for certain who’s work it is. It happens, and this is not the only painting in Florence with an artist we can’t name.

At first glance it looks like any other Renaissance Madonna and Child with St John the Baptist. It is nice enough but you wouldn’t necessarily stop and swoon over it. In a city with more art within one square kilometer than any other city in the world, this painting is lovely but expected. You can imagine it on the walls of any Florentine palazzo. She is pretty, wears a red dress with a dark cape and a young John the Baptist is there with with baby Jesus. Ho hum.

But look over Mary’s shoulder and things get interesting. In the countryside behind her we see a shepherd with his small flock and his dog. Look more closely at both the shepherd and the dog. He has his hand raised to his forehead in awe and both he and the dog are looking up to the sky. Follow the line of their gaze and you will see what appears to be a B movie style flying saucer.

I’m not kidding! A grey, oval object is moving across the sky, with spiky golden rays emanating from it. Could it be a UFO?

The painting is dated to 1510-1520, a time during which there were no flying machines. Leonardo started work on his ornithopter around 1485 but the skies over Italy in those days were occupied only by birds. So what exactly is going on here?

UFOlogists are adamant that this is proof that UFOs were being sighted during the Renaissance. Some art historians say the odd looking grey object is an angel appearing as a cloud (I don’t see it – they were realllly good at painting angels back then. Renaissance painters specialized in angels, and none of them were painted as grey blobs with golden spikes coming out of them.) The historians also say the shepherd is shielding his eyes from the light of God and that the nativity star with the three smaller stars in the left hand corner represent Mary’s continued virginity, before, during and after childbirth.

What do you think? UFO or grey blob of angel? Or could it be something else altogether?

Are you planning a trip to Florence? Would you like to know my favorite secret spots in Florence? My favorite places for lunch and dinner, where to have a drink with a view, the best markets and even a secret jewelry shop behind a hidden door! Get my Secret Florence PDF for free. Download your copy HERE

I’ve loved her for years. She is one of the most magnificent cities in the world.

One of my absolute favorite things to do in Florence is to get up early and go walking.

Before the crowds descend, before the views get obstructed by the human masses, before the lines of tourists wrap around the buildings. 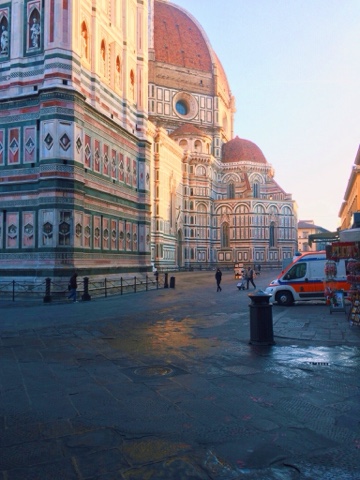 There is a magic hour in Florence after the sun is up and before the shops are open, when there is almost no one around. That is my favorite hour. This is when the city is my own, and I don’t have to share her with anyone.

All images taken on my iPhone while walking in Florence.