This article just arrived in my inbox courtesy of Smarter Travel 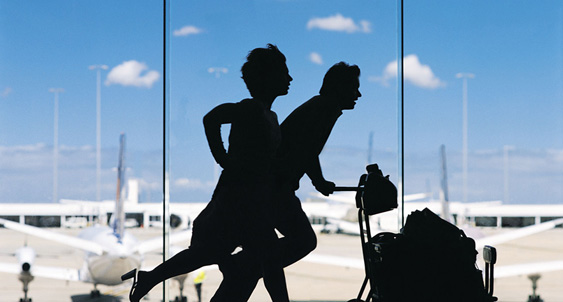 I have certain airports that I will not use, no matter what. My most loathed airport in the USA is Chicago O’Hare, largely because in all my years of flying I have never had a successful connection through O’Hare. On the occasions I have had to fly through O’Hare something always goes wrong, whether its delayed flights, planes not arriving, missed connections. Its a nightmare! (If you want to really screw up travel plans, fly United through O’Hare. They are the devil’s duo). No matter how many hundred dollars I can save by flying to Europe through O’Hare I never ever do it.

I do disagree with Smarter Travel about some of the items on this list though. I think LAX Tom Bradley terminal is just fantastic. I am thrilled to route any flight through there,and often I start my international flights at LAX. One thing I always notice when using the Bradley terminal is that the workers smile at you. They are polite and friendly. A couple of years ago I flew from Rome to JFK, where everyone was rude and angry, shouting at travelers and being as difficult as humanly possible. Four days later I flew to Australia from LAX and thought I was in a different country! None of the TSA agents or airport workers were hostile, everyone had a smile, and I watched them being friendly and helpful to everyone.

Phoenix Sky Harbor should also be on the good list. Apart from the fact that its my home airport (I live in Phoenix), Sky Harbor is an incredibly efficient, easy to navigate, very well appointed, thoroughly modern airport. I always consider myself very lucky to have this as my home airport.

I do use Philly frequently too, routing out to Italy via Philadelphia, but unfortunately I usually get routed home via JFK. In my experience Philadelphia has a pretty modern facility, is functional, and I’ve never had a problem.

The 10 Worst Airports In America

By Tim Winship for Smarter Travel

As any road warrior worth his or her rollaboard will tell you, the country’s airports are no friendlier than its skies. Ancient terminal buildings, threadbare carpets, stinky restrooms, poorly designed crowd control, sparse seating, unappetizing food concessions… the list of travelers’ gripes is a long one.

But according to J.D. Power’s newly released 2017 North America Airport Satisfaction Study, some relief may be in sight. “Overall passenger satisfaction with North American airports has reached an all-time high, as airports of every size have found creative ways to address the challenges of constant construction projects and increased passenger capacity demand.”

And that’s on top of last year’s results, which showed the average traveler-satisfaction score rising from 725 in 2015 (on a 1,000-point scale) to 731. Even that modest uptick was encouraging, given the 5 percent increase in airport traffic and the sky-high wait times at security checkpoints earlier that year.

Related Post: 8 Random Things You Should Pack When You Travel

The study scored airports on a combination of six factors: terminal facilities, airport accessibility, security check, baggage claim, check-in/baggage check, and terminal shopping. Based on those criteria, the 10 highest-rated airports were as follows:

It’s worth noting that the three lowest-ranked airports are currently undergoing massive construction projects, which can’t help but impede traffic and generally make navigating those airports a frustrating and time-consuming experience.

Of course, when the projects are completed, flying to or from those airports—and indeed most airports—will still be frustrating and time-consuming, just less so.

What are your best and worst airports? Tell me in the comment section below!

I can’t believe how totally craptastick JFK and O’Hare are. They are an embarrassment. When flying to and from Italy I always try to use Charlotte airport,  (which is small, efficient and friendly) and flat out refuse to use Chicago. More frequently than not I end up having to use JFK or Philadelphia. After 10 hours in the air you really want to arrive somewhere friendly, modern and clean, with some good dining options. These two airports are none of these things.

The Tom Bradley international terminal at Los Angeles LAX airport is magnificent. It is modern and beautiful and leaves you thinking you are in Dubai. And everyone smiles and is friendly. The JFK folks need to do a field trip to LAX to check it out.

The following is an article from The Wayfarer, all about the very best international airports in the world.

And, Once Again, the World’s Best Airport Is… Perhaps it’s time to consider Singapore’sChangi Airport  the “New York Yankees of air travel.” How else could one spin the news that Lion City’s largest airport has been named best in the world for the fifth consecutive year?

The designation came down earlier this month from Skytrax World Airport Awards, an independent annual evaluation that bases the final rankings on the results of millions of international passenger surveys. This year was the sixth annual Skytrax awards; Changi has five first-place victories and one second-place win (back in 2012).

It’s not hard to see why fliers could consider the three-terminal airport to be the air travel equivalent of the winningest sports franchise of all time. In addition to being one of the busiest hubs in Asia, Changi boasts two 24-hour movie theaters that show current releases for free, a rooftop swimming pool (complete with locker rooms for changing), and a butterfly garden teeming with butterflies.

The airport is also putting the finishing touches on a fourth terminal, which, according to the Straits Times, a Singaporean newspaper, is slated to open later this year.

Sadly—embarrassingly, really—not a single North American airport cracked the Top 10. In fact, the highest-ranked airport on our continent is Vancouver International Airport in Canada, at No. 13.

The United States isn’t represented on the Skytrax list until No. 26, an honor that goes to the Cincinnati/Northern Kentucky International Airport. (The dark horse win seems like a great piece of trivia to whip out at your next soirée.) Denver International Airport was tabbed as No. 28.

It’s hard not to read the Skytrax list of winners and dream about what U.S. airports could be. The takeaways: We need more free movie theaters. Or at least a few butterfly gardens.

Matt Villano is a freelance writer and editor based in Healdsburg, California. In nearly 20 years as a full-time freelancer, he has covered travel for publications including TIME, the Wall Street Journal, the New York Times, Sunset, Backpacker, Entrepreneur, and more. He contributes to the Expedia Viewfinder blog and writes a monthly food column for Islands magazine. Villano also serves on the board of the Family Travel Association and blogs about family travel at Wandering Pod. Learn more about him at Whalehead.com.