Junk food giant McDonalds is trying (re)open a temple to processed meat at the place built 2000 years ago to be a temple to all Gods, and I for one am not happy about it.

Italy pioneered the slow food movement, a movement that is about real food, in season, not processed, as close to farm to table as possible, eaten at a table with friends and family. Basically the complete antithesis to the garbage that is McDonalds.

So the American junk franchise aggressively trying to push its way into the sites of ancient ruins is even more offensive than otherwise.

RELATED POST: 7 TIPS YOU NEED TO KNOW BEFORE TRAVELING TO ROME

Although there’s a McDonalds on every street corner in America they are few and far between in Italy. The Fast food culture hasn’t really taken off in Italy, a country where meals are consumed sitting at a table be it at home or in a restaurant.

But McDonalds isn’t targeting Italians. Italy is one of the most touristed countries in the world, and McDonalds wants those tourists, so it is trying to worm its way into the big tourist sites. Just last week they got turned away from the Baths of Caracalla, this week they are trying to pollute the Pantheon.

The Piazza della Rotonda, home of the Pantheon has a variety of eating options, from artiginal gelato, to the most famous coffee shop in the world (Tazza d’Oro) to a variety of trattoria and restaurants. You can sit outside at a table with a view of the Pantheon and enjoy Italian food and culture. McDonalds wants to violate that, siphoning off Americans and Chinese and plowing their tourist dollars into junk-o-rama at the expense of the local businesses.

There are multiple ways the city loses when McDonalds comes to town, but lets look at three of them:

Italians don’t really benefit too much from all these tourists. Beautiful, historical piazzas such as Piazza della Rotonda don’t charge an entry fee, you just walk in. The only way the city and the people make money is by tourists spending money in stores and at food establishments. Local business benefit from the influx of tourists sitting at their tables, eating their food.

If a percentage of those tourists are now getting Big Macs instead, those local businesses get hurt.

American fast food chains generate an extraordinary amount of trash. Here in the states people walk around eating fast food and then (hopefully) dump the refuse into trash cans. Look around any American city and see how much fast food rubbish is littered around the streets. A McDonalds by the Pantheon is going to create trash around the Pantheon.

It should also be noted that Rome already has a problem with trash collection and disposal. The city doesn’t need American food franchises adding to the volume and making it worse.

A McDonalds at the Pantheon will draw even more people into the area as tourists follow the signs to the golden arches. As tricky as it can be to take a photo of the Pantheon without tourists getting in the way, a McDonalds will make it worse.

The Burden Of Extra Tourists In The Piazza

Bringing American tourists to a McDonalds at the Pantheon also brings more problems, for everyone – you and me included.

Whether they are right or wrong, pick pockets think American tourists have the best and easiest stuff to steal. The average American tourist is likely to have more cash on them than the average European or Eastern European. The flash more jewelry, more overall bling, and as a result are pickpocket magnets.

If you were a pickpocket and didn’t want to hang out at the Trevi Fountain, a big American fast food chain would be the next best thing. Easy pickings from distracted tourists busy supersizing their orders and plowing through fries. I wouldn’t care about that – serves you right for eating there, but now you have drawn more pickpocketing to the area, and that impacts all of us.

If you belong to some deranged sect and want to inflict harm on a large group and get your cause some internationally televised fame and attention, what better place to do it than one where Americans hang out? McDonalds, Starbucks, Subway – none of them should be in Italy, period. I tell all of my Glam Italia Tour travelers to stay the heck away from them and with the exception of two travelers, over the years have been successful.

Although I travel the world without fear of terror attacks, I do consciously avoid the areas around McDonalds and Co. While writing this I did a quick google search on terror attacks and McDonalds. It looks like over the years there have been plenty.

McDonalds had a junk food palace in the Piazza della Rotonda in the past but was run out of town back in 2011. Hopefully the powers that be will turn their backs on any kickbacks paying the chain’s way into the piazza. The reversal on permitting the proposed Baths of Caracalla McDonalds at least gives me some hope.

If you feel you need McDonalds to be part of your travel experience, maybe just stay home?

Do you want a bigger, more authentic experience in Rome, away from the tourist crowds but still in the heart of the city? My new book Glam Italia! 101 Fabulous Things to Do in Rome: Beyond the Colosseum, the Vatican, the Trevi Fountain, and the Spanish Steps

shows a different side of the Eternal City, with loads of options for incredible things to do without the crush of tourists! It is already a bestseller – get your copy today and see why! 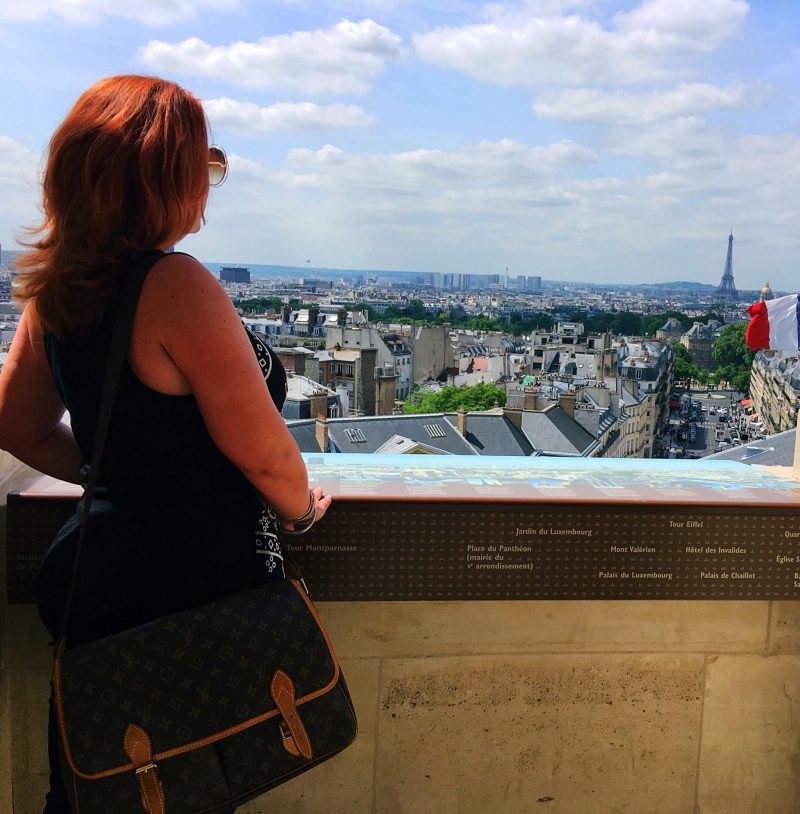 I love seeing beautiful cities from up high. Paris is one of those cities that you need to learn by walking endlessly, but you also need to see it across the rooftops.

Normally I like to go to the rooftop cafe at Printemps and look out over Paris with a cafe au lait or a sancerre, depending on the time of day, but this time I got to Printemps and the roof cafe was closed. I think they told me it would be closed for 2 years, but my French sadly is not what it used to be, so who knows?

Anyway, I decided to take another elevated option, one I hadn’t done before, and go up to the top of the Pantheon.

Truth be told I had never been to the Pantheon in Paris before. Even though I have been to Paris about a million times. The Pantheon is in my favorite part of town, the left bank. 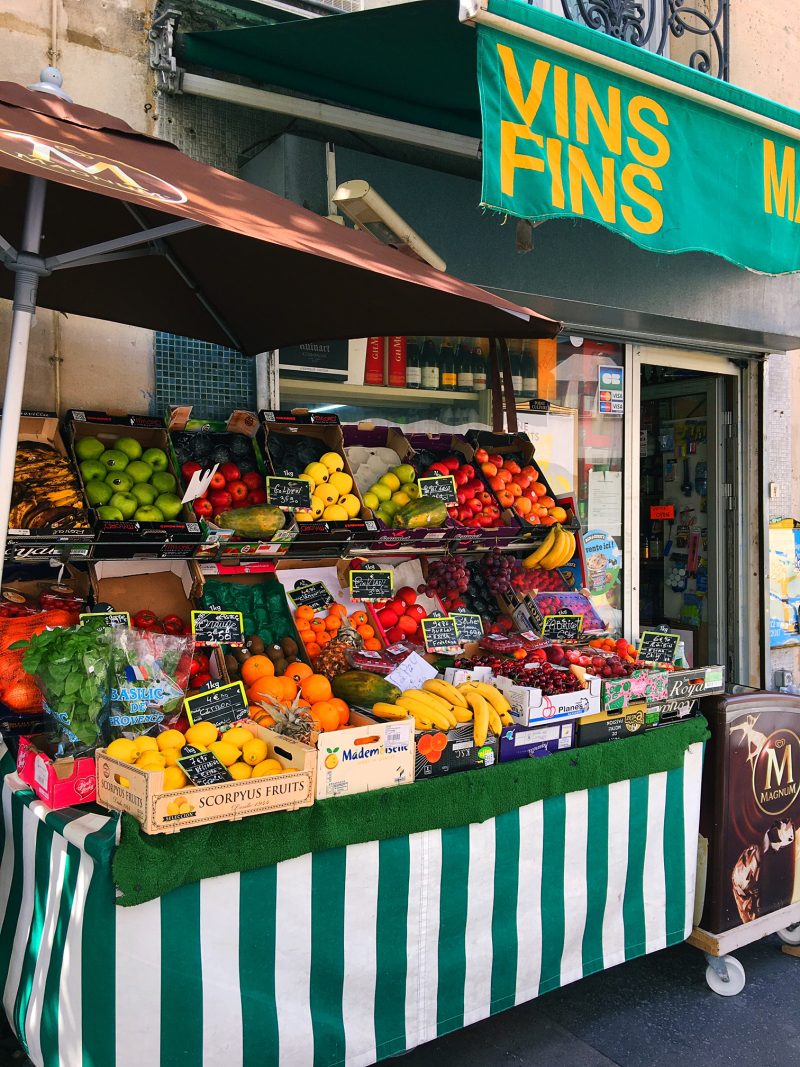 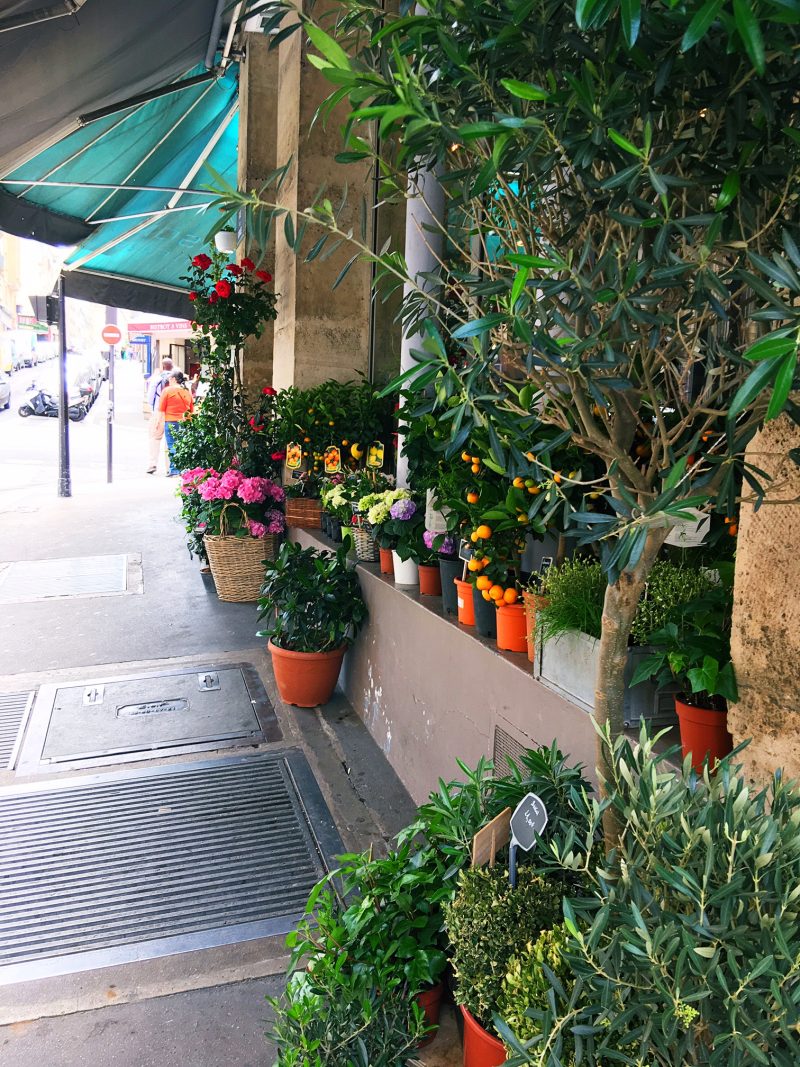 A gorgeous amble up Rue St Jacques or Rue des Carmes onto Rue Valette, past flower shops and coffee shops, beautiful Parisian streets that keep you dawdling forever, and you’re there. 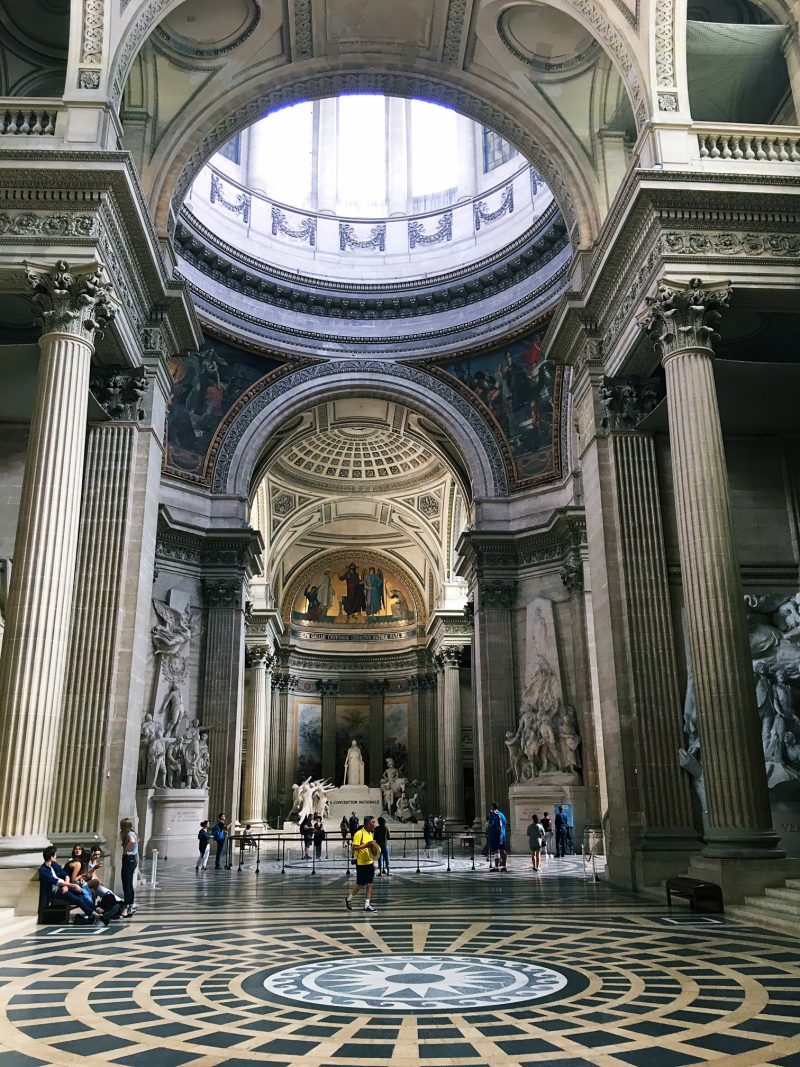 The Pantheon is a neo classical building modeled on the Pantheon in Rome. It is well worth visiting in and of itself, but for an extra €12 you can climb 206 stairs to the roof and one of the most fabulous panoramic views of this endlessly gorgeous city. 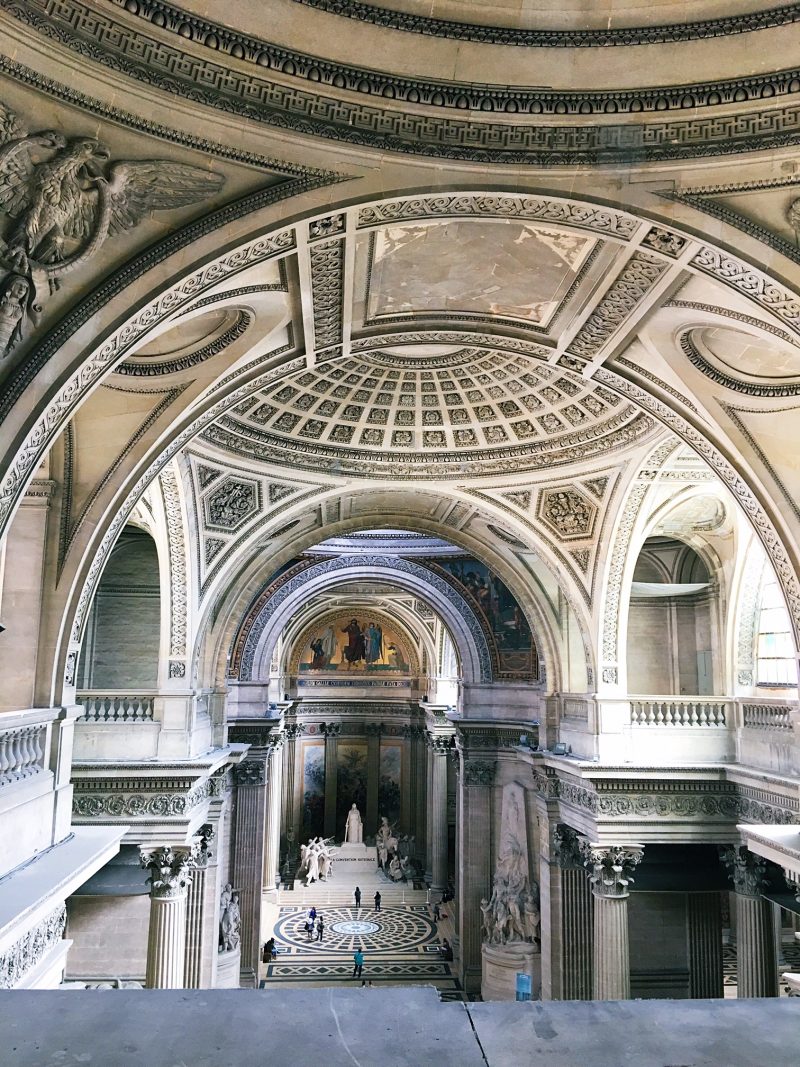 The view from the interior balcony of the Pantheon

There are a couple of points to stop at along the way, so you don’t have to do it all in one go.

Then you get to the top and walk outside to a view that will take your breath away. 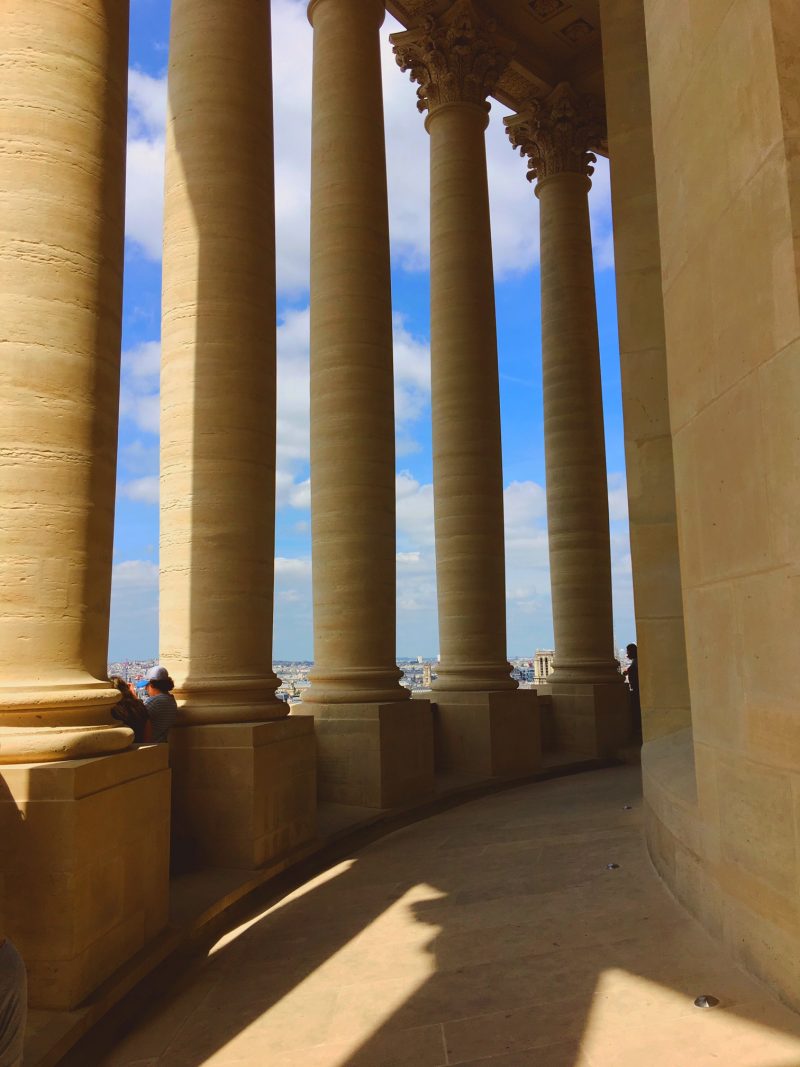 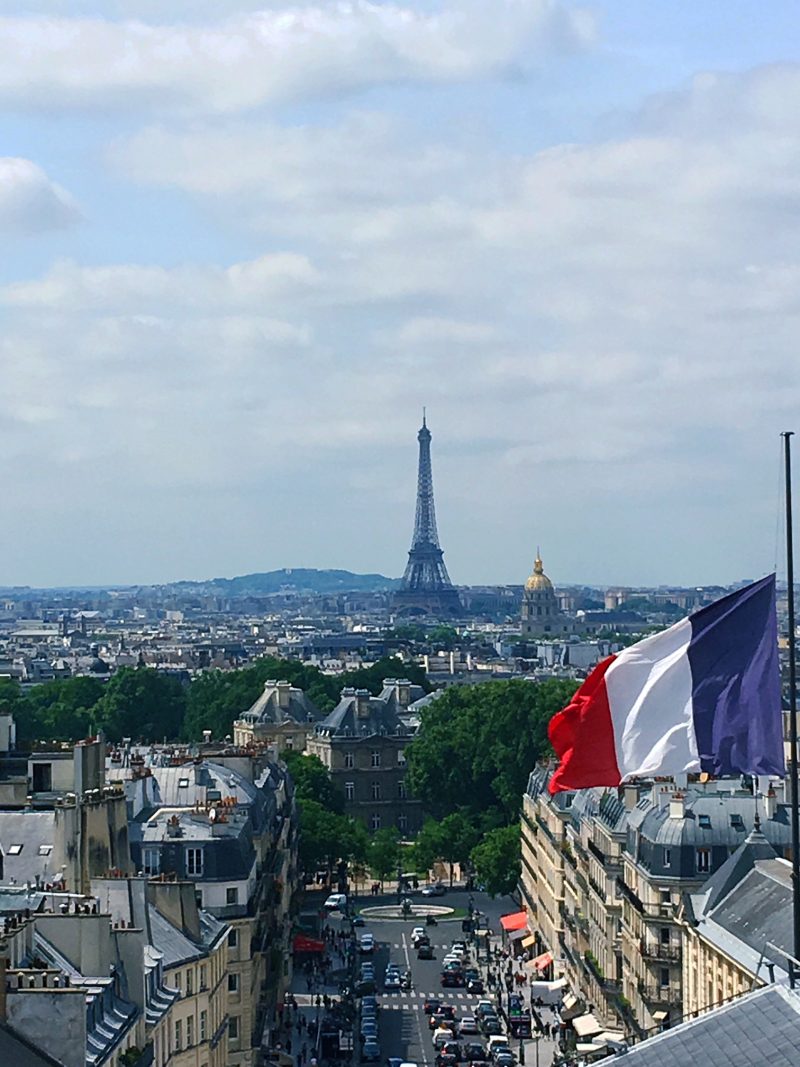 I don’t know if I lucked out with a low tourist day or if it’s just not a huge draw, but it was delightfully empty when I was there. No lines, no crowds, not even 50 people inside.

Next time you are in Paris, take the time to go to the Pantheon. You won’t be disappointed.

I flew Air France from Los Angeles to Paris. I used to fly them all the time, and I had forgotten what a wonderful airline they are! I was upgraded to Premium Economy and really had a tremendous experience. Air France doesn’t sponsor this blog and I paid for my flight – they didn’t give it to me.

The flight attendants looked so stunning and put together throughout the flight, the food was great, the plane was in good shape. I will fly them again for sure.