This past weekend I went to Dallas to watch my good friend
Jennifer Jo Cobb racing at Texas Motor Speedway. 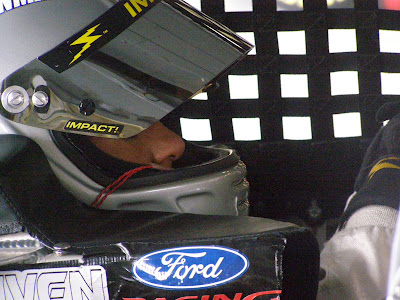 even in a helmet Jen manages to look gorgeous! 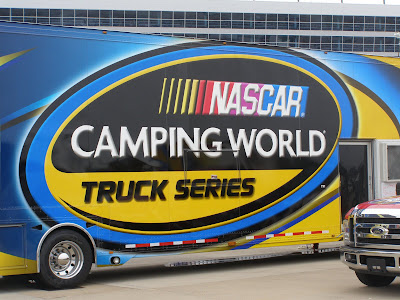 She’s the only girl racer in the entire Nascar series.
(Later this year Danica Patrick will be back in the Nascar Nationwide Series)
On the track you’d never know a girl was behind the wheel
but walking around she infuses an unmistakable sense of glamour.
She’s gorgeous, has the body of a supermodel, and a mane of thick, long red hair
that you can spot a mile off. 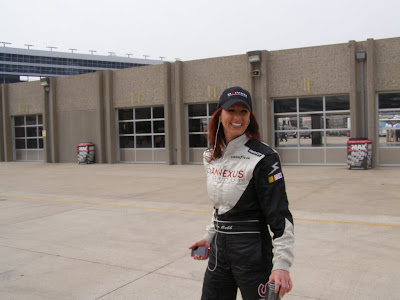 As well as being super fabulous, she is super fun!
Her team adores her, and she comfortably and seamlessly transitions from
high heels and lip gloss to hanging out with the boys. 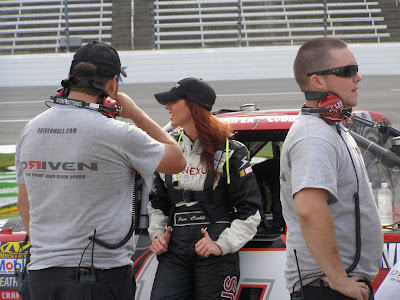 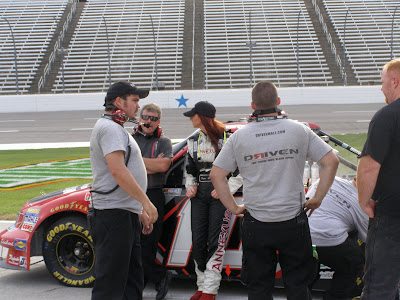 waiting to make her practice runs at Texas Motor Speedway. 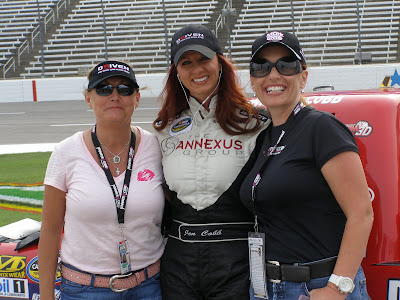 pre practice, Denise Harmon Mixon (team manager and one of the most fun people I have ever known!), Jen and me 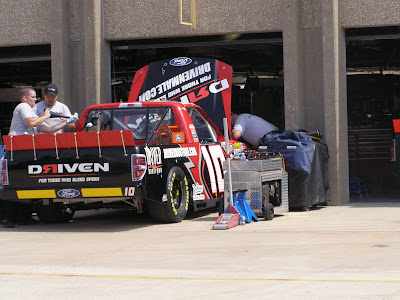 Jen’s truck at the garages at Texas Motor Speedway

On raceday we had an hour long autograph session, outside, with the temperature over 100 degrees plus humidity.
There were long lines of dedicated fans braving the heat to get au tographs.
Nascar has 71 million fans here in the USA, 40% of whom are female.
These girls get super excited to see and meet a girl racer,
who is not only lovely looking, but is also very identifiable.
Jen has been a motivational speaker for years, and is able to put people at ease immediately.
Everyone comments on how easily they can relate to her, and she to them. 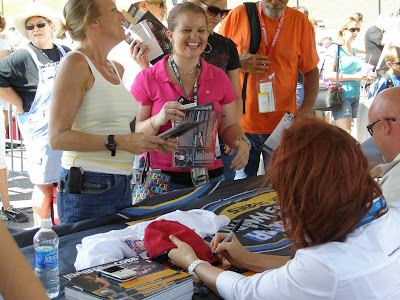 Just so happens the boys want to do some relating too!
Nothing quite like having a beautiful girl sign your arm…! 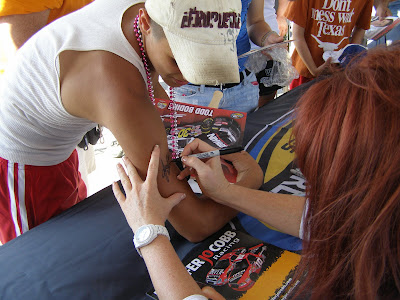 And of course, wherever Jen goes, the TV cameras are not far behind.
It seemed everywhere we went at the track there was a TV camera nearby. 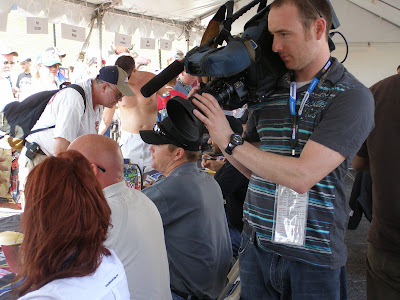 After an hour in the heat I was so ready for some chill out time in the air conditioned race hauler,
but another legion of fans had lined up there too, waiting for the chance to meet her.
Not one to let people down, Jen sat out there for another hour, meeting and greeting. 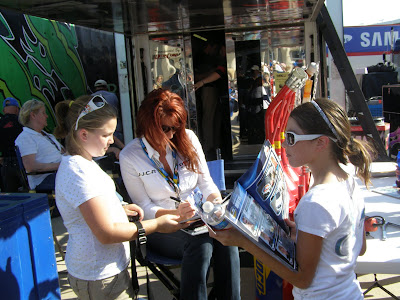 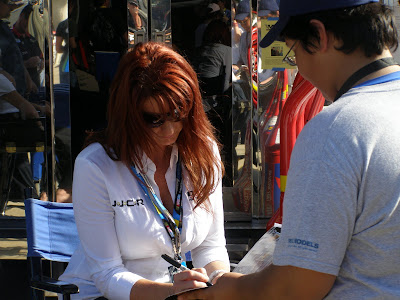 At Driver Intro’s the TV folks found her again,
this time waiting in line with fellow rookie Brett Butler,
who drives the Fuel Doctor USA truck. 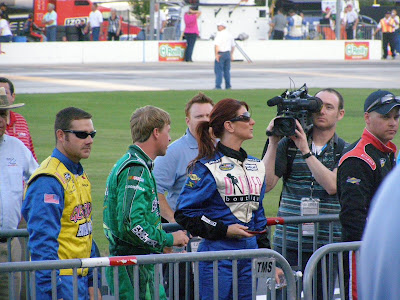 This was a night race, which I think is my favorite.
I watched from the pit box, which is my favorite place to be.
Right in the heart of it all! 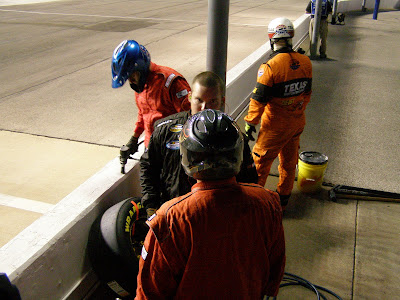 Pit stops are so exhilarating to watch, especially when they’re only 3 feet away! 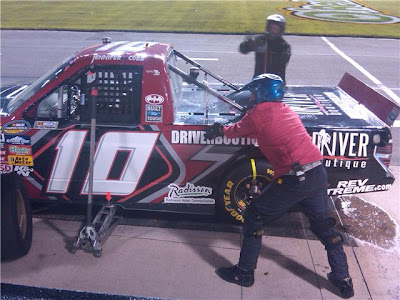 I sat with Crew Chief Steve Kuykendall, and listened in on radio to all the
crew chief/spotter/driver chat, which is actually really quite exciting!
Especially when they’re guiding a driver through and past the smoke and debris of a big crash,
and safely getting them to the other side at 178 mph!! 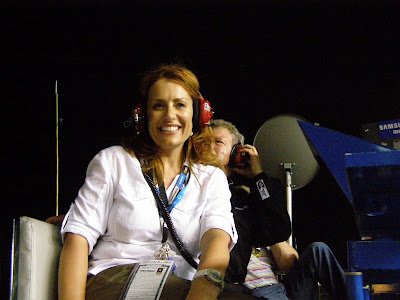 oh the humidity!!! Thanks to Moroccan Oil I didn’t have my usual damp air afro… 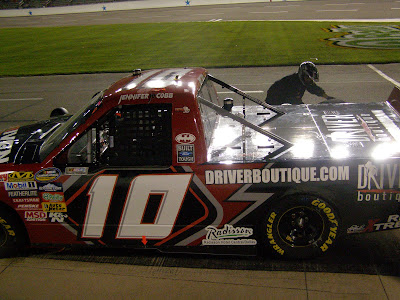 Jen actually ran her best race ever in Dallas, finishing a very cool 14th place.
There were 30 something in the race, so it could be argued that she dealt it to those boys! 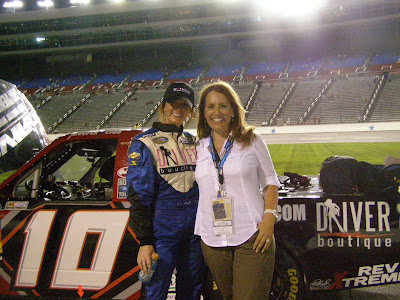 And after 2 hours racing in punishing heat,
she still managed to look stunning at the end of the race!

Jennifer has a really cool line of racewear both for guys and (of course!!) for girls.
You can find her T’s, hats etc at the Driver Boutique
www.cobbracingteam.com