I’m so excited! It looks like I will be leading another private tour of Italy and Sicily at the end of summer. ( Glam Italia II).

I was just thinking the other day that if I were to find out I was never going to set foot on the magnificent isle of Sicily again, I would probably just curl up and die right there on the spot.

Sicily is one of the most magnificent places I have ever traveled to. And I can never wait to get back.

I think about Sicily every day.

There are so many things to love about Sicily. One of them is the food.

American Sicilian food is nothing like the food in Sicily. Sicilian food is spectacular. Everything has been grown locally in nutrient rich volcanic soil, the seafood is caught in the pristine waters of the three seas that frame the island, and the exotic blend of flavors reflect the multicultural history of this place.

If you are heading to Sicily make sure don’t leave before you try each of these: 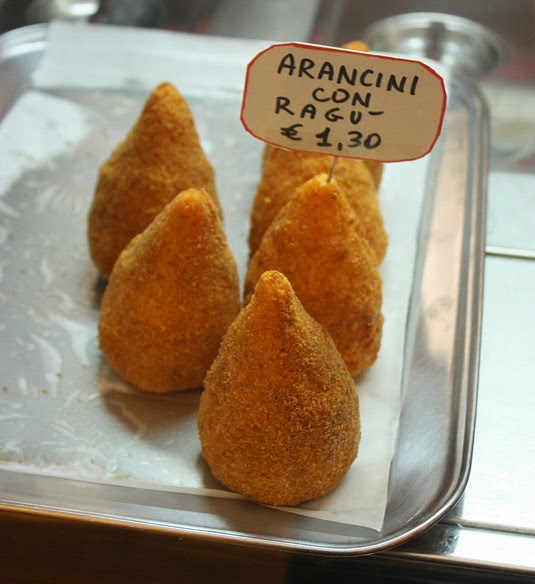 These are rice balls filled with ragu and deep fried. They are soooo good! And very filling. Your eyes might be bigger than your stomach!

Especially Alici. (anchovies)
There is something about the way Sicilians prepare their anchovies. You couldn’t pay me to eat them at home where they are horrible, salty and pungent. But there they are sensational. The first time I ate them I didn’t know what they were, and probably wouldn’t have even tasted them had I known they were anchovies, now I eat them every day in Sicily! And every day I eat the local seafood. The restaurant menus change all the time as they are based on today’s catch, not on what is in the freezer.

At some point during a trip to Sicily you have to try this dish of pasta made with fresh tomatoes, fried eggplant, basil and fresh firm ricotta.

We ate this salad at a little cafe on the beach in Lipari on the 2014 Corinna B’s World Glam Italia tour. It looks simple enough, but was so amazing we went back three times! Simple “peasant food” in Sicily is so good 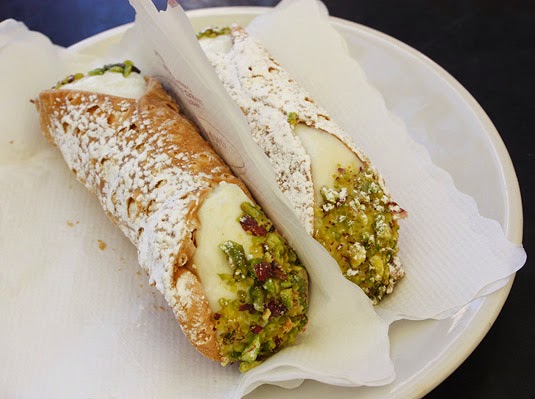 This is another food that I really don’t care for stateside, but in Sicily (where they are from) fresh cannoli are just amazing. Crispy shells filled with fresh sweet sheep’s milk ricotta flavored with chocolate chips or local pistachio. There’s just nothing quite like them!

You can’t beat an icy cool granita on a hot, sunny Sicilian day. They come in a variety of flavors are super refreshing and are nothing like Italian ices in America. The texture, consistency and taste are completely different.

In Sicily, when the days are long and hot and start early, granita and gelato are also breakfast food. A coffee flavored granita with cream ( beware – they add a very generous serving of cream) or a limon granita make a divine way to start the day.

The first time I went to Sicily my friend Silvana made me a list of foods I HAD to try. One of them was brioche with gelato, a combo I would otherwise have passed on. Believe it or not this is another breakfast food! Warm sweet brioche filled with the creamiest gelato on earth. It is super sweet, gets a little melty, and is the food of the gods.

Pistachios were introduced to Sicily during the Arab rule, and now find their way into all kinds of foods. There are so many pistachio flavored foods to try – don’t miss out on them!