File this one under ” Things To Do In Paris…”

Pere Lachaise Cemetery in Paris is both world famous and fascinating.

It is the final resting place of many interesting characters from Proust to Chopin. It covers a huge expanse of park like surroundings with tombs and graves enveloped in winding avenues and chemins, sheltered by giant, no doubt centuries old trees. 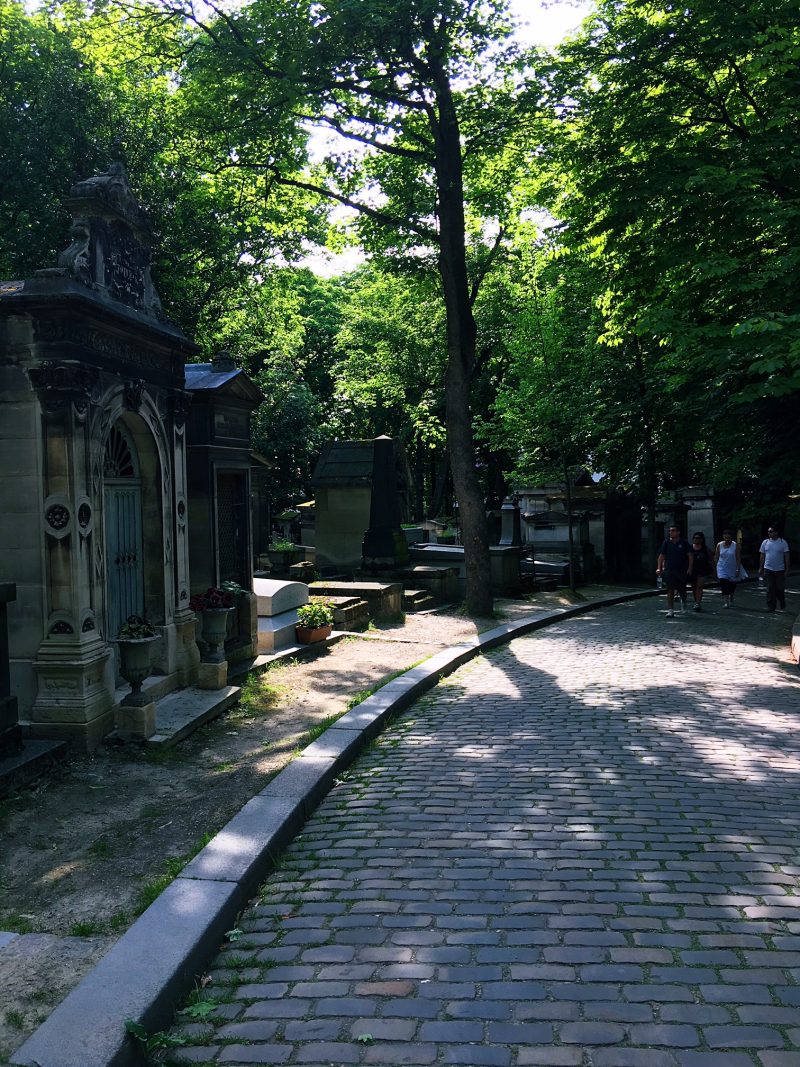 It’s a little rundown, but charmingly so. The perfect location for a vampire movie, Pere Lachaise has just the right amount of wrong – there’s something a little decadent about this place.

When you arrive at Pere Lachaise it’s easy to find the grave of perhaps it’s recently most famous guest, rockstar Jim Morrison, because there are always fans making a pilgrimage to see him. His much visited grave is fenced in and always has fresh flowers. But it is probably the least interesting grave in the cemetery. 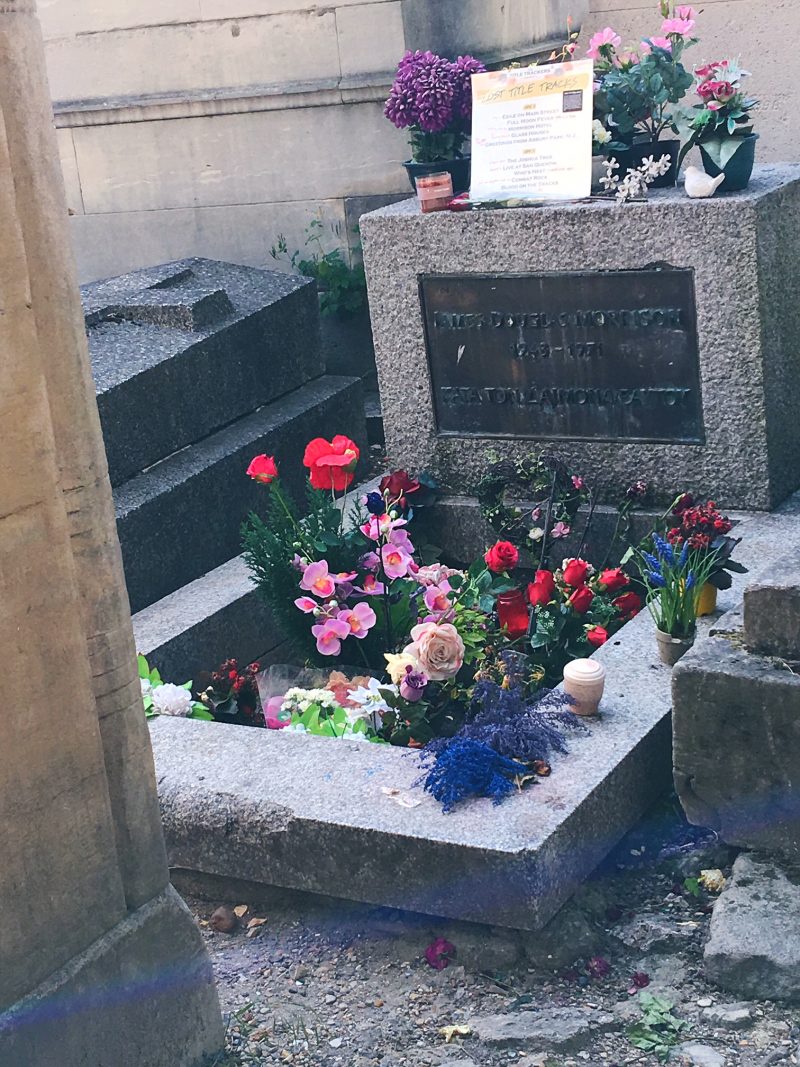 The best shoes and sandals to wear in Europe this summer 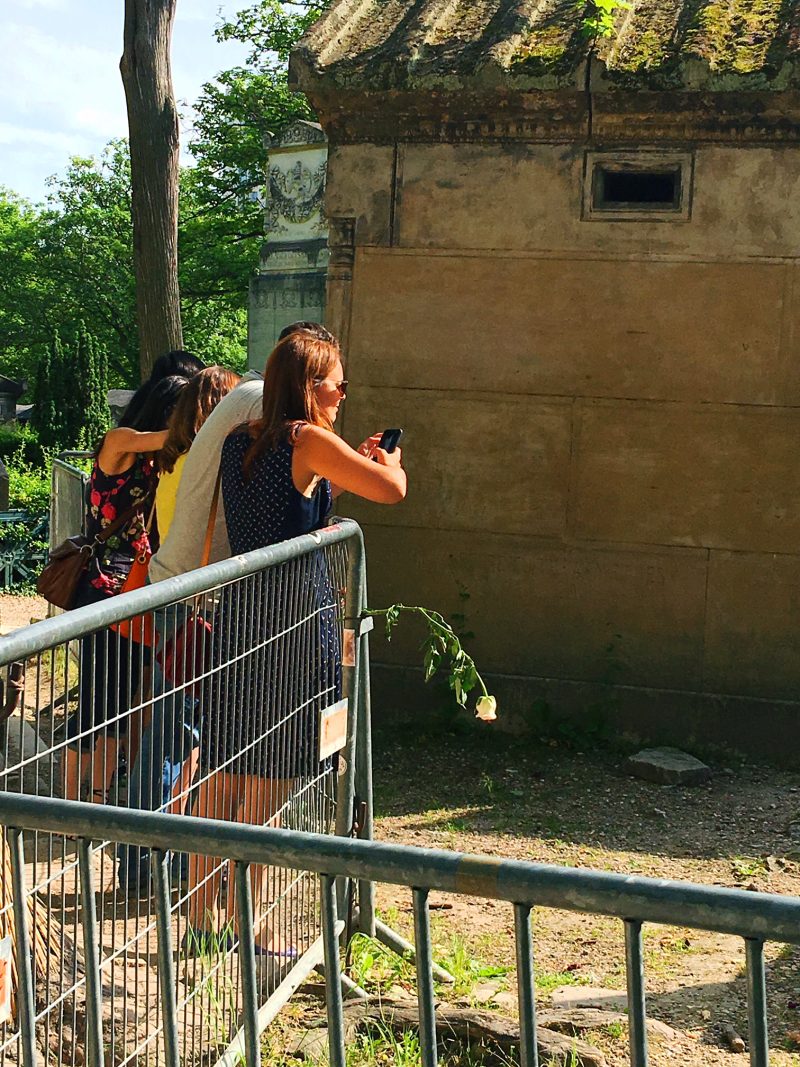 Related: Find one of the best views of Paris

One that is far less known, but still gets good traffic, is that of Victor Noir. Victor himself was an interesting fellow, having died during a duel with Prince Pierre Bonaparte, great-nephew of Napoleon. 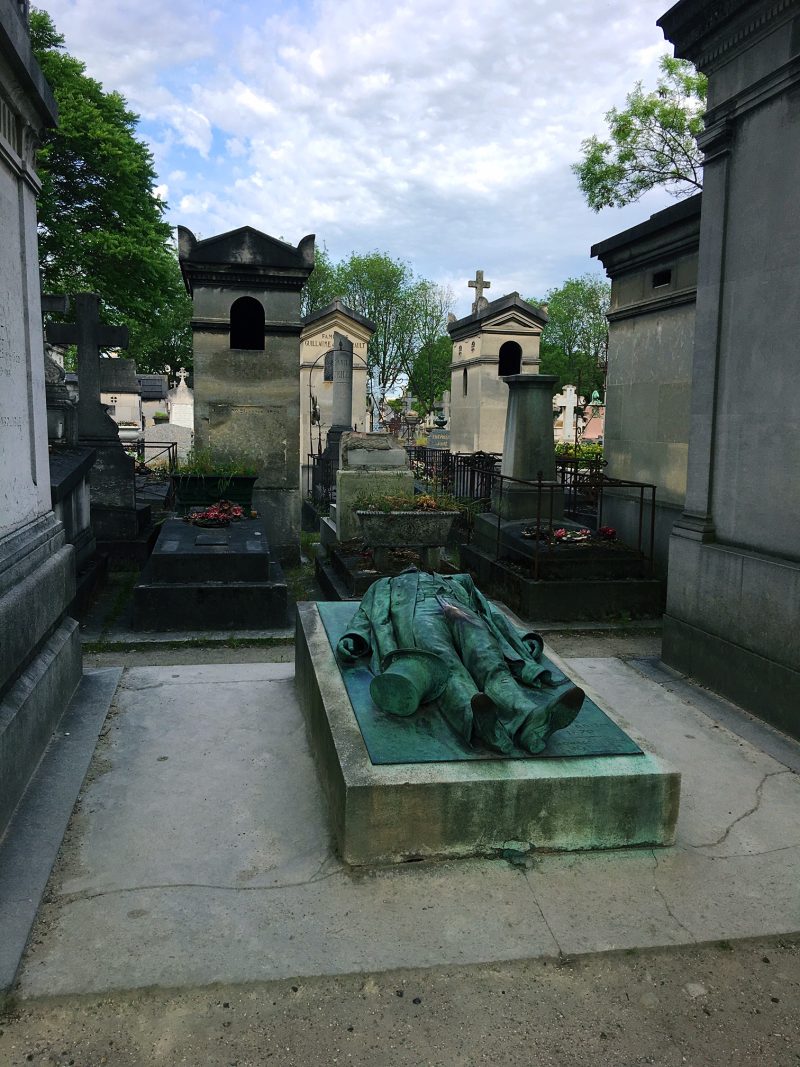 There he lies, Victor Noir

There was a public outcry, and more than 100,000 people joined the funeral procession to his initial grave in Neuilly. In 1891 his grave was moved to Pere Lachaise cemetery in Paris.

Inscription on the grave of Victor Noir in Paris.

Victor Noir’s likeness is sculpted on the grave itself. He of the fancy clothes, heeled footwear, cherubic curls did not come to cemeterial fame due to his handsome face though, his grave is famous and well visited because of the giant appendage in his pants. 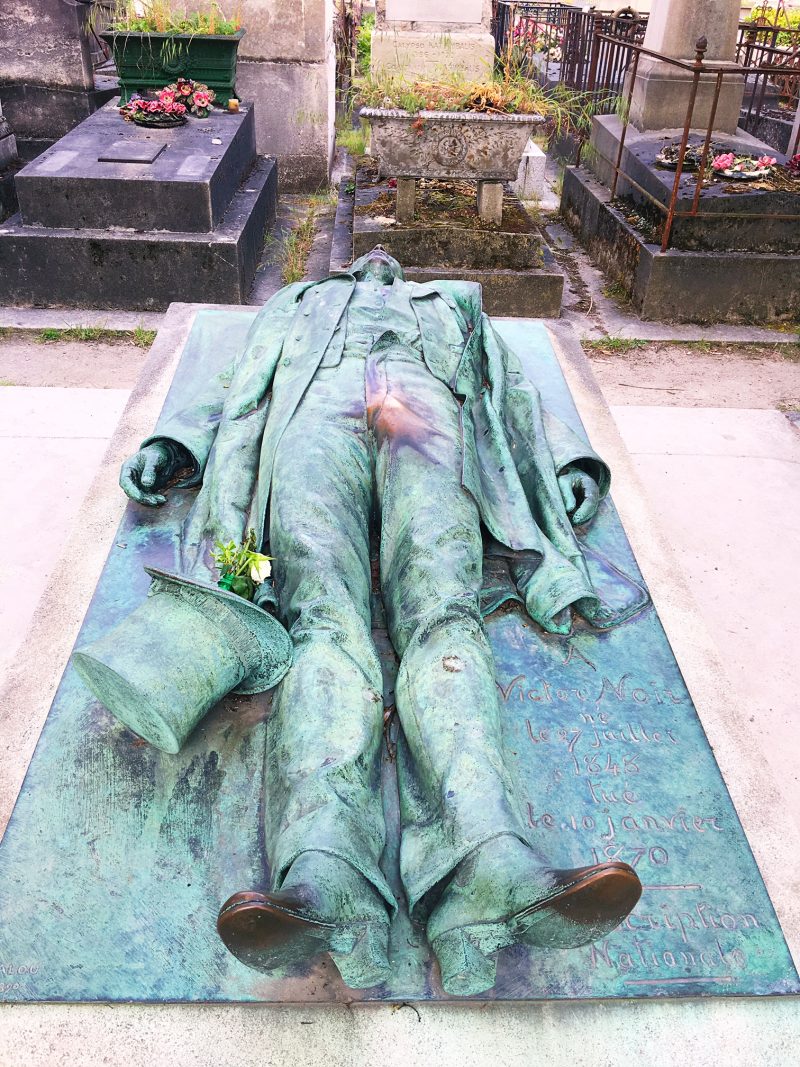 The man with the golden gun, Victor Noir.

Apparently our Victor Noir was well hung, and this detail was recorded for posterity in his sculpture. Jules Dalou sculpted our Victor to make it look like he had just fallen dead in the street. With a huge bulge in his pants. 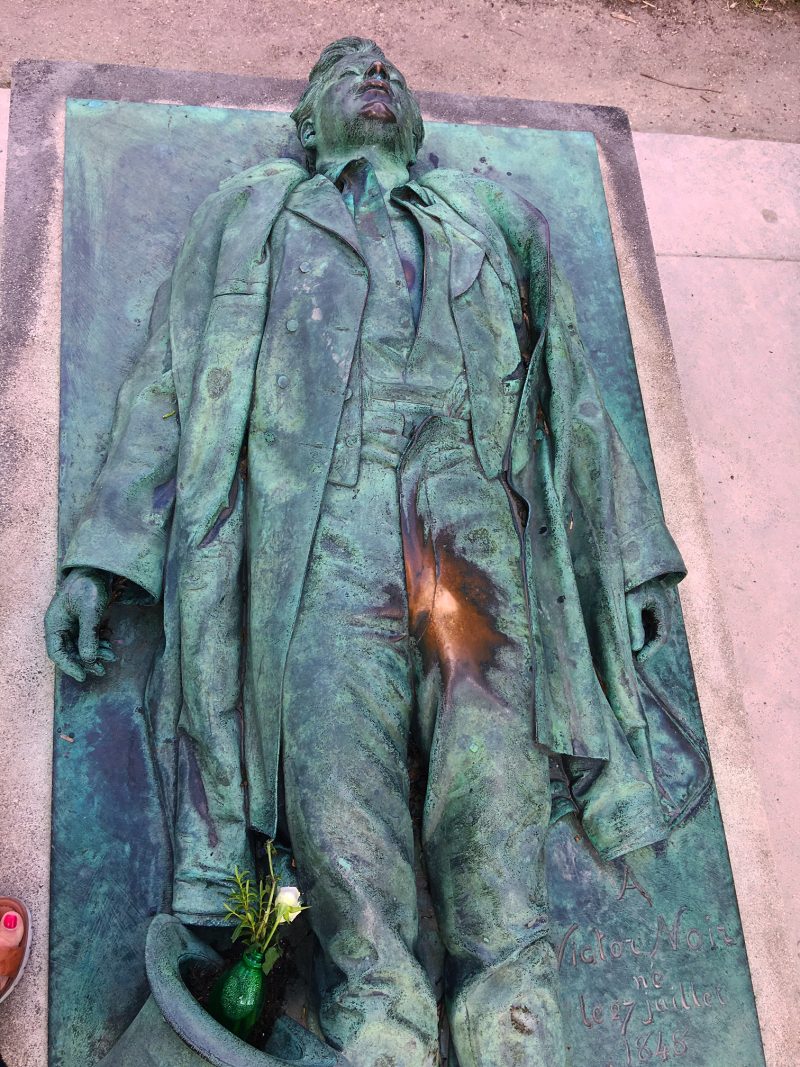 Said bulge has been rubbed so often by admirers that it almost glows. The rest of our resting Mr Noir is green, but his unit and his mouth glow bright bronze. 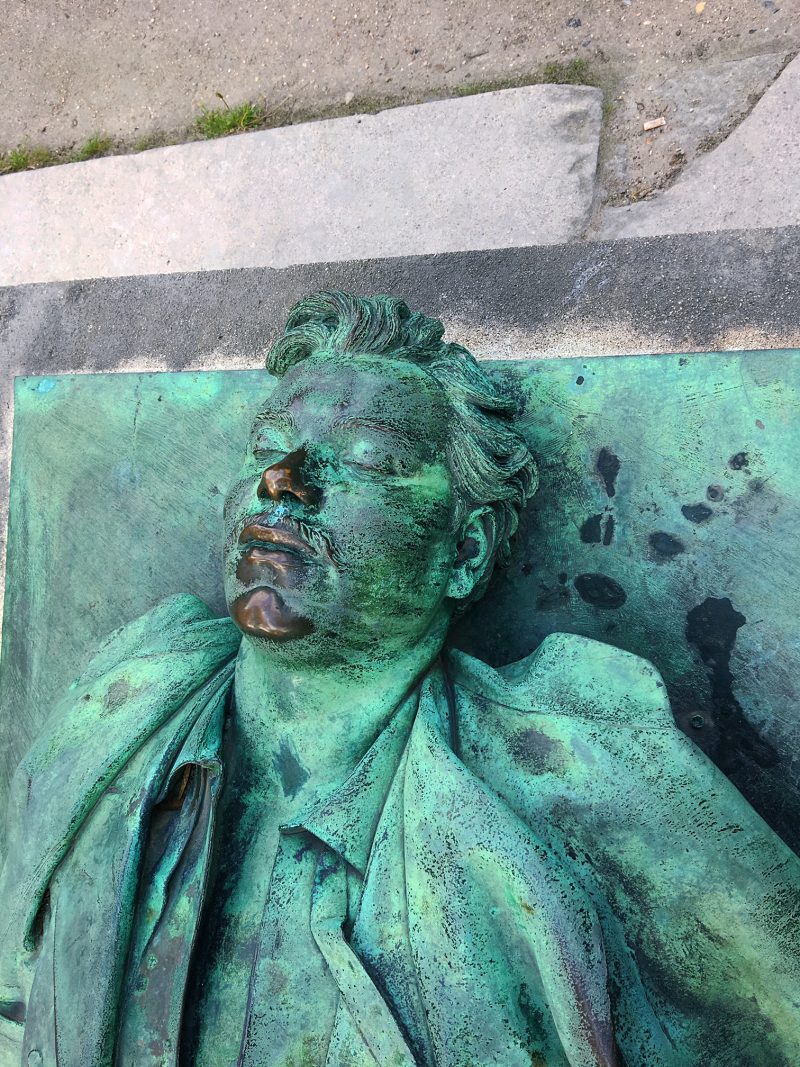 It is customary to rub the groin of Mr Black, and countless women have in fact climbed on top of him and kissed him too, as evidenced by his glowing, bronze mouth. But don’t just take my word for it:

The sculpture has a very noticeable protuberance in Noir’s trousers. This has made it one of the most popular memorials for women to visit in the famous cemetery. Myth says that placing a flower in the upturned top hat after kissing the statue on the lips and rubbing its genital area will enhance fertility, bring a blissful sex life, or, in some versions, a husband within the year. As a result of the legend, those particular components of the otherwise verdigris (grey-green oxidized bronze) statue are rather well-worn and shiny. #Wikipedia 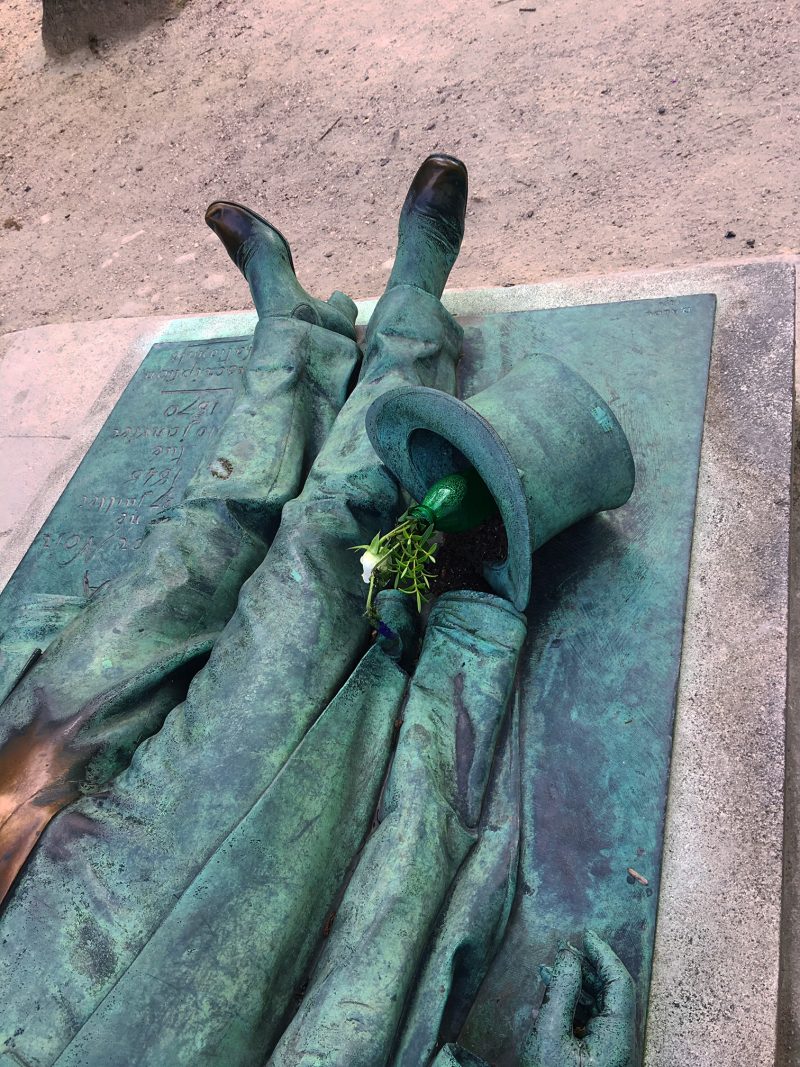 If you are in Paris a trip to Pere Lachaise cemetery is well worth your while. Should you want to visit Jim Morrison, he is in plot number 30 off of Chemin Maison. Victor Noir is at the opposite end of the cemetery, the soles of his feet squaring to Avenue Transversale 2 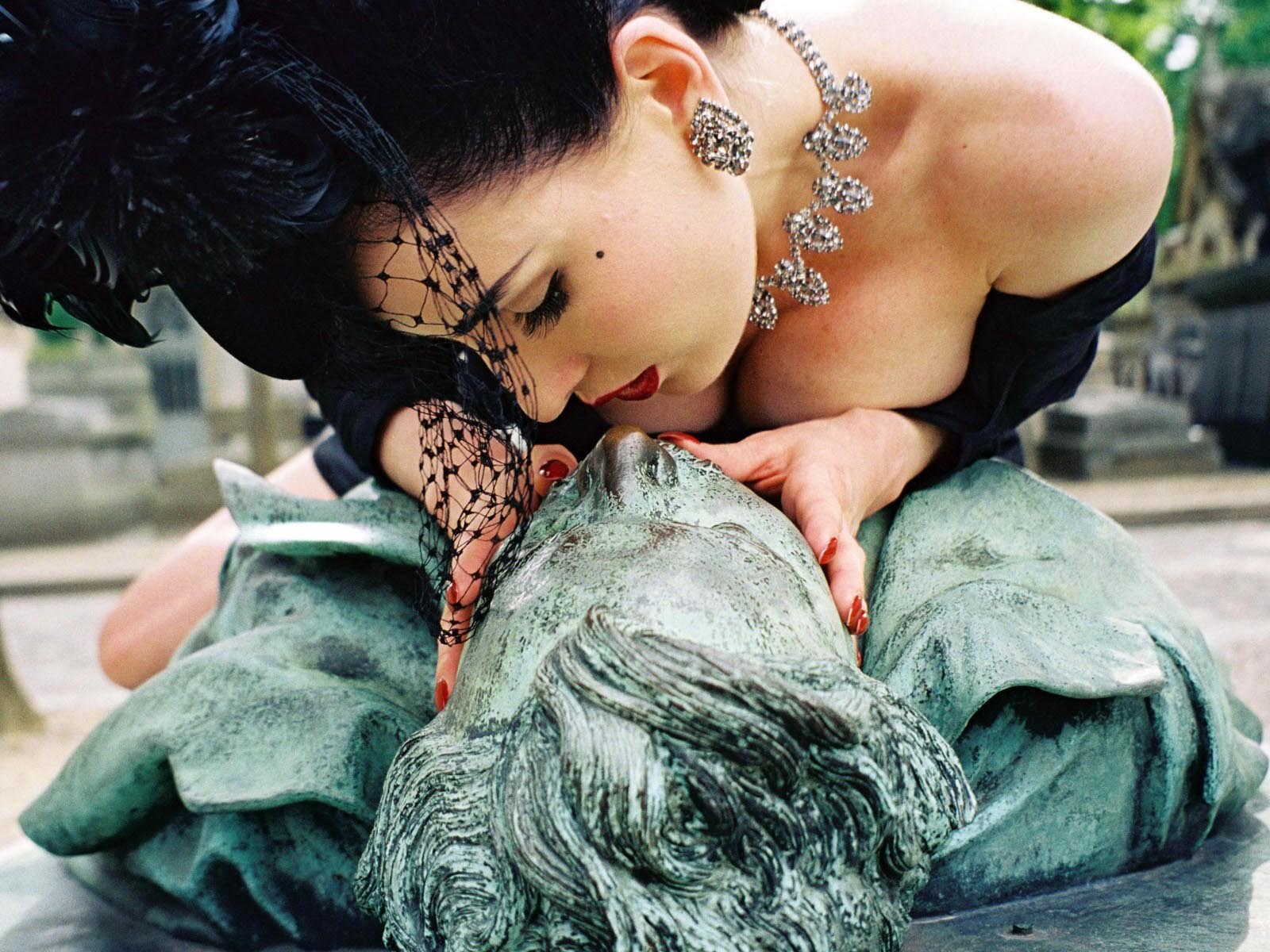