I absolutely love Barcelona. I used to spend much more time in Spain when I lived in London, but over the past few years hadn’t been back until this past December (2017). I am a huge believer in traveling on your birthday, if not every birthday then at least as many as you can. My birthday is the week before Christmas, which is completely lame as everyone is busy doing Christmas-y things, but it is also brilliant because it can be the perfect time to travel!

Related Post: Why You Should Travel On Your Birthday

This year I wanted to head back to Barcelona for my birthday. My best friend decided to join me, and we had no end of fun enjoying Catalan hospitality and Catalan culture. The Christmas markets were happening, and although it was cold (ish) with most days in the high 50’s to low 60’s, which is my kind of cold (for my non American readers the average day was 12.5 degrees celcius to 18 degrees celcius), almost every day had sparkling blue skies.

Related Post: Christmas In Barcelona – What Is Caga Tio???

One of the best things about being in Barcelona in December was the near void of tourists. If you have been to the Catalan capital between April and November then you already know what a brain-bending human crush it can be, especially when the cruise ships are in the harbor, disgorging thousands of tourists at a time. December on the other hand is perfect. You can wander freely through the streets, you can see everything you want to see, the cost of almost everything goes down, even the pick-pockets are taking their annual holiday. It is magic!

One of the things I love to do in Barcelona is to c shop at La Boqueria market on La Rambla. 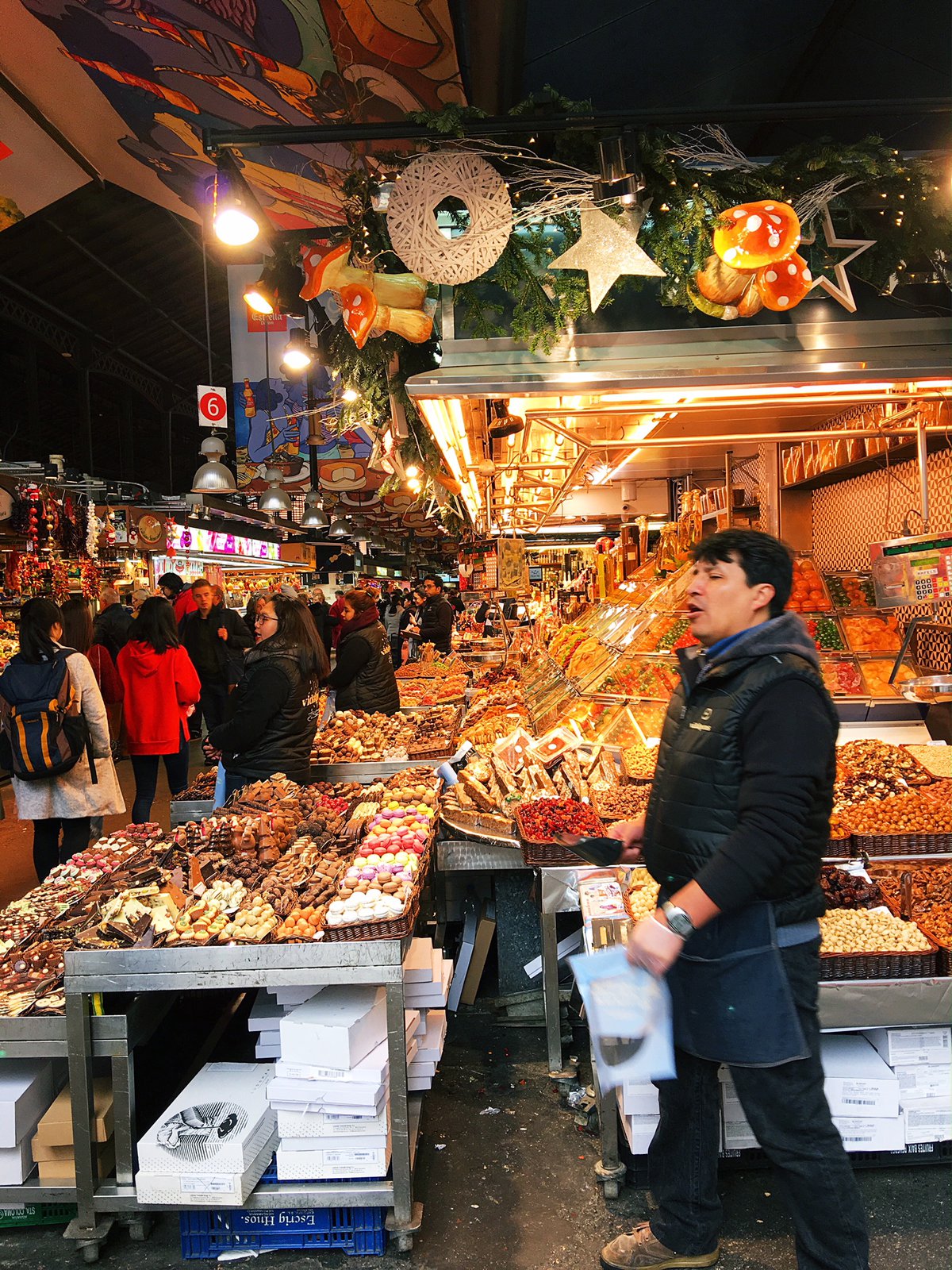 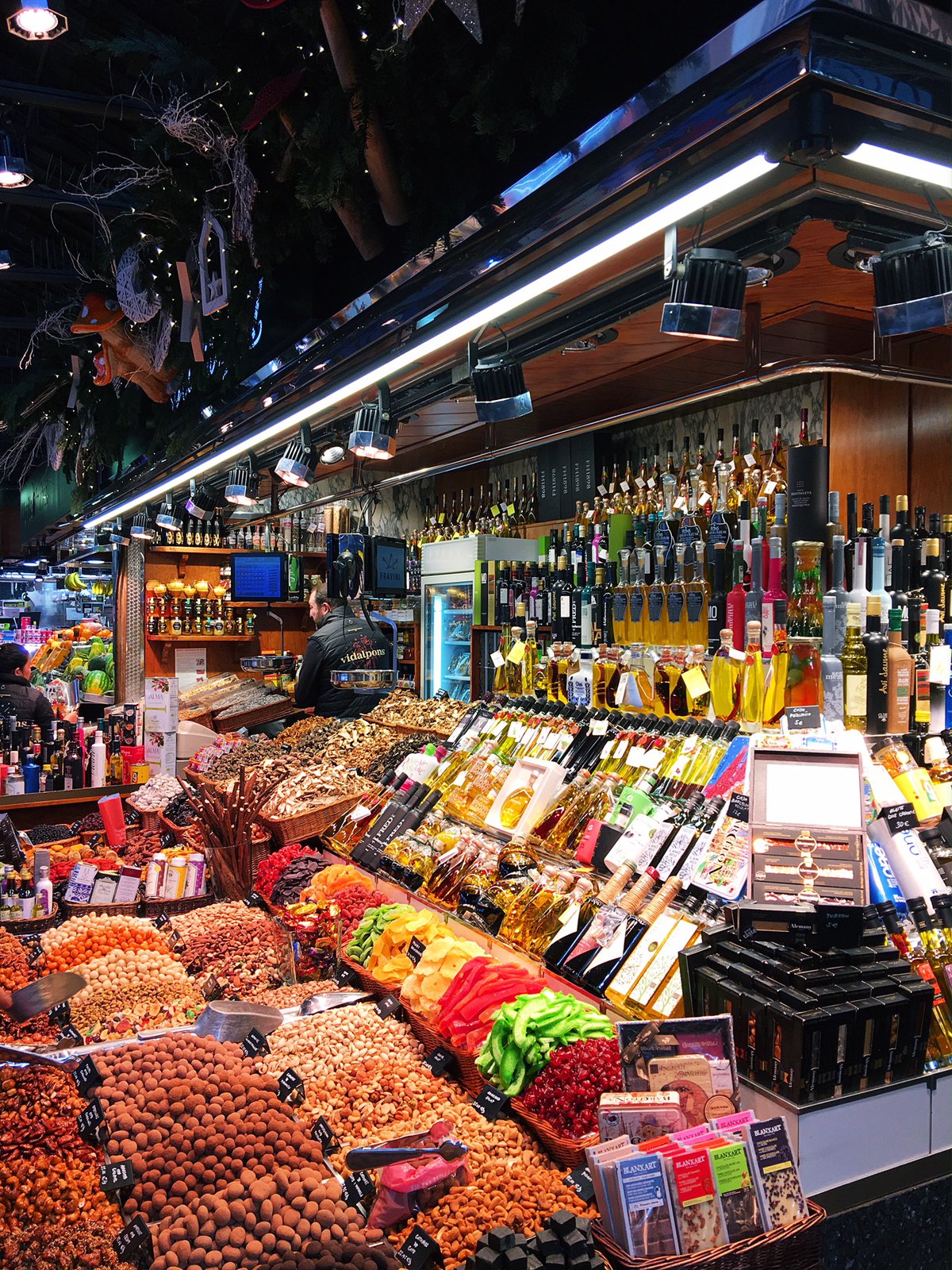 La Boqueria has a history dating back to 1217, when tables were installed near the old city gate from which butchers sold meat. Later, from 1470 it became known as Mercadi Bornet, and was a pig market. At some point over the next centuries it became known as Mercat de la Palla, or straw market until 1794. Then it was renamed La Boqueria, which is perhaps derived from the Catalan word boc, which means goat, and could therefore indicate it was a goat market or a market selling goat meat. 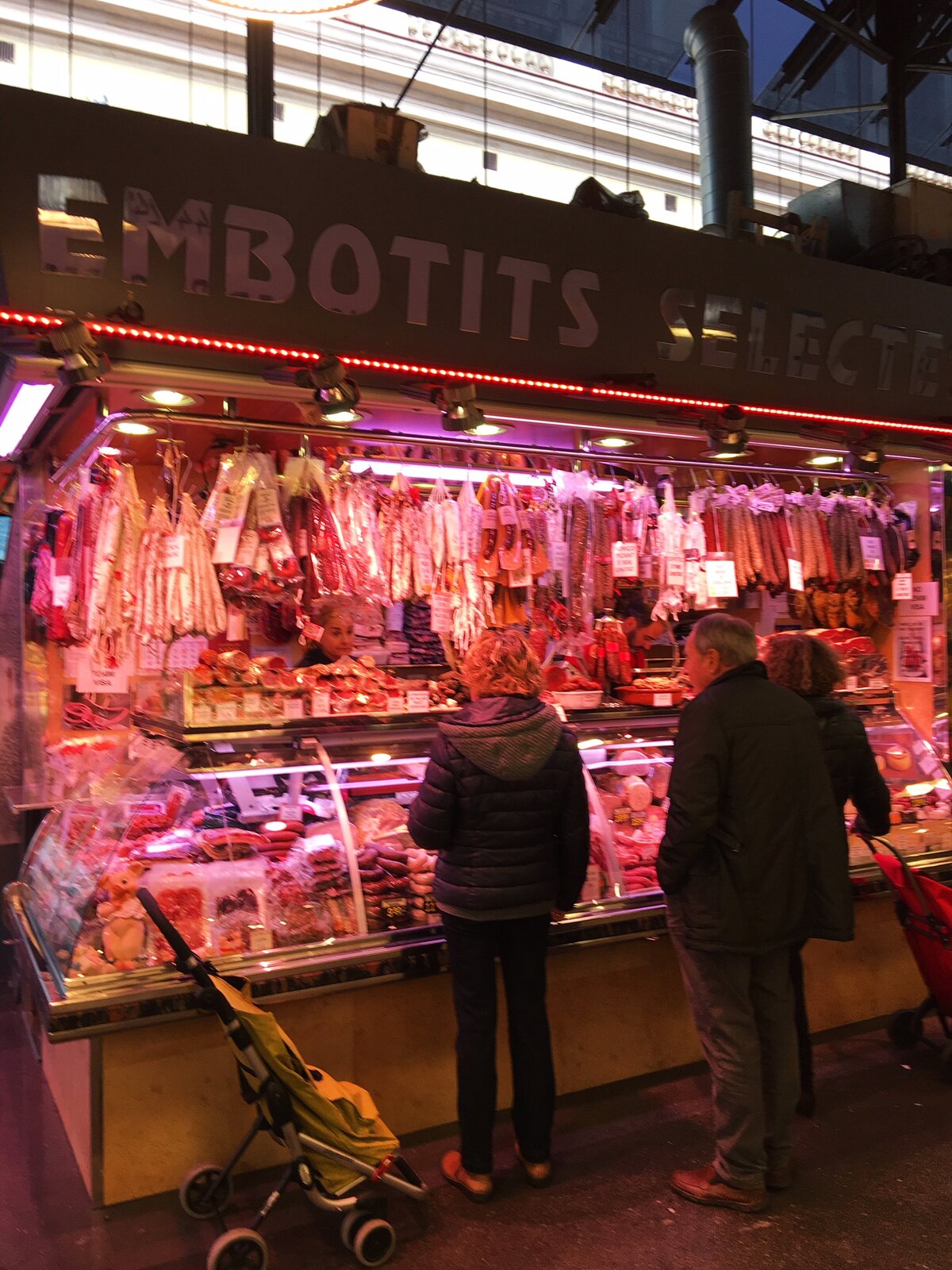 In 1835 the decision was made to construct a market on La Rambla, mainly for butchers and fishmongers. Now on average 200 vendors open their stalls every day, selling fish and meat, nuts and vegetables, fruit and eggs. There are vendors selling snacks and there are bars where you can sit down and have a drink and a meal. 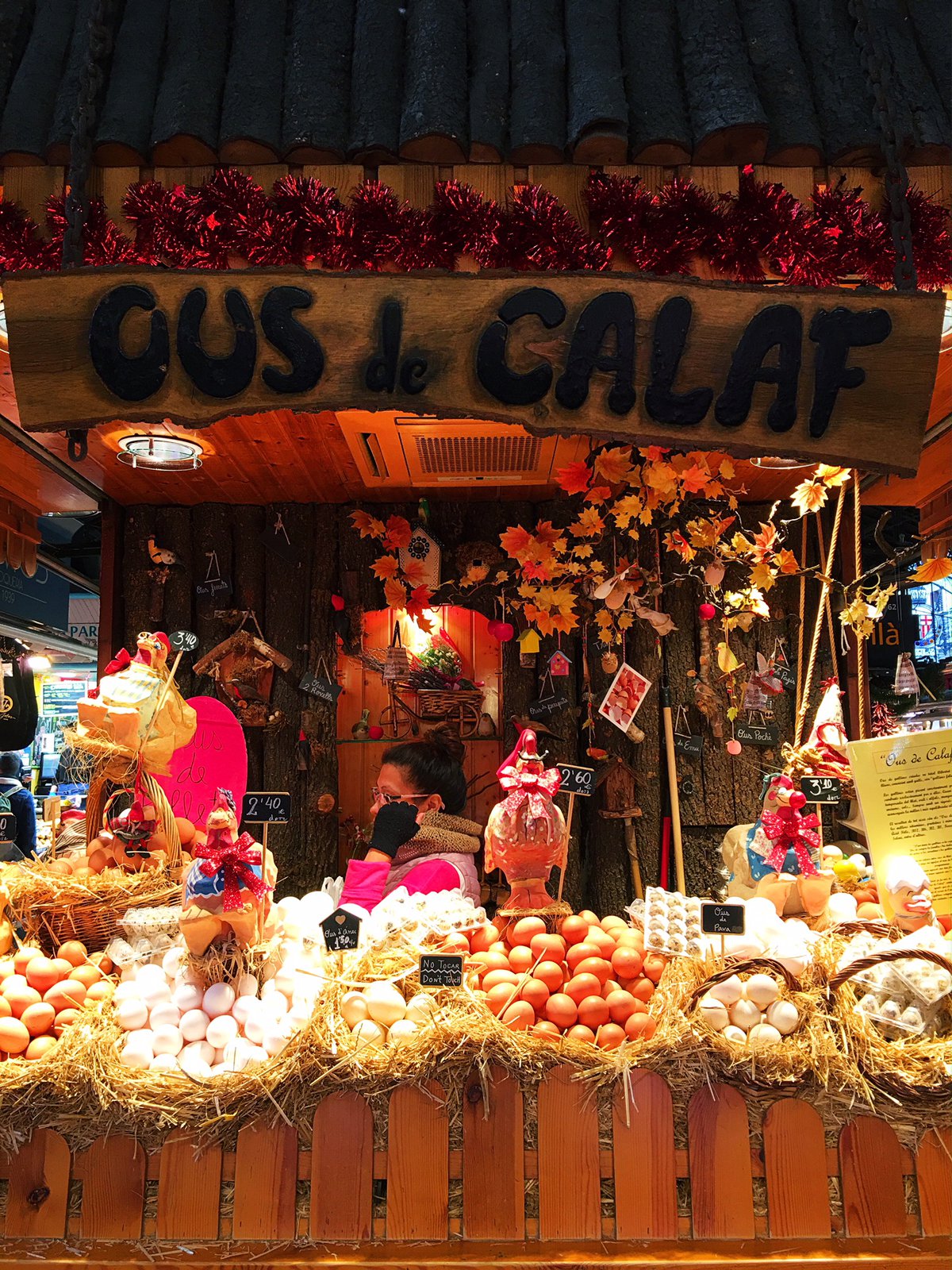 Related Post: 10 Things You Absolutely Must Do In Barcelona 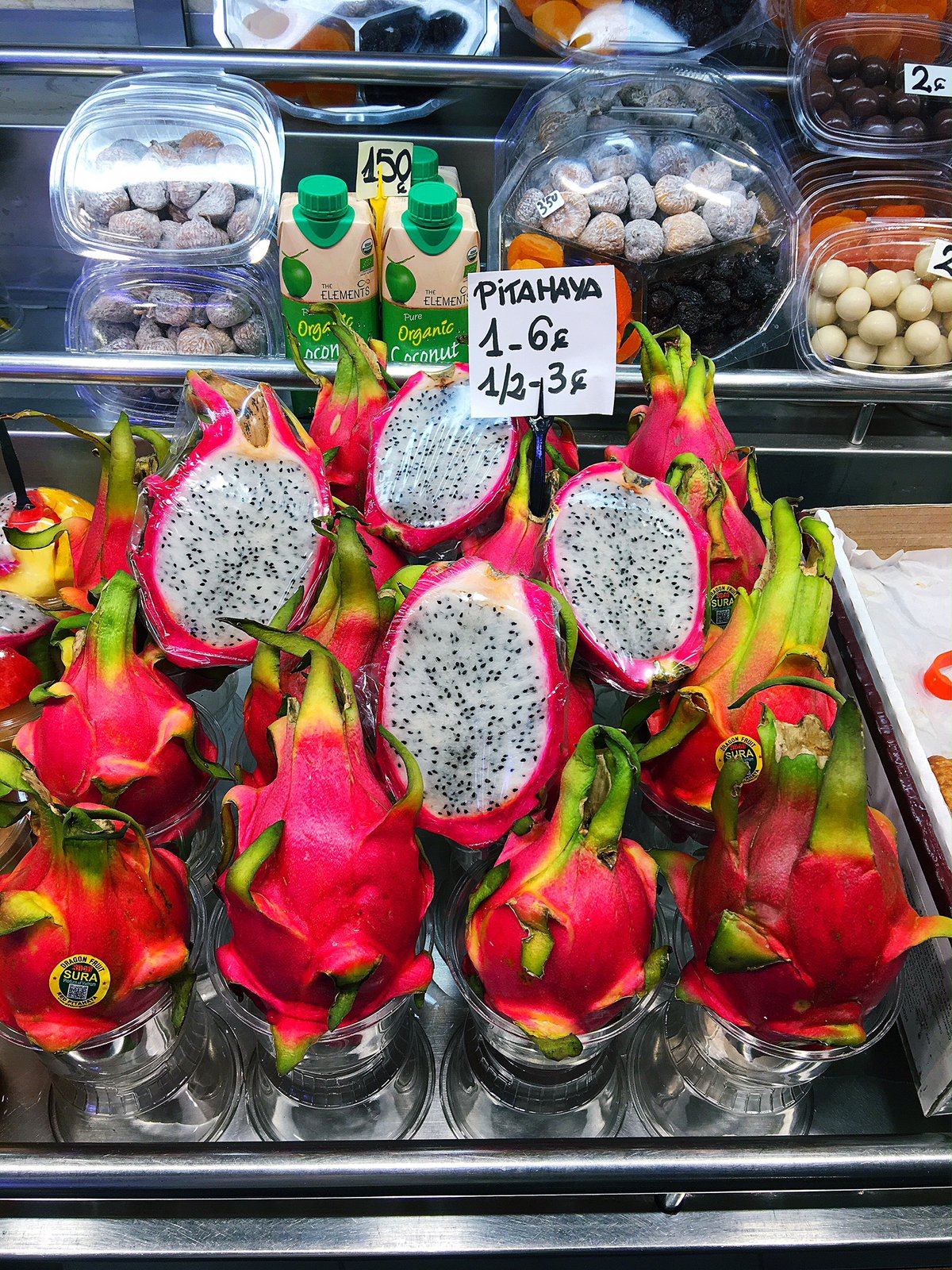 La Boqueria is a visual banquet, your eyes just don’t know where to land next! As you wander up and down aisle after aisle of market stalls you get caught up in the explosion of colors that make up the local Catalan foods. The sights and smells and sounds are wonderful! 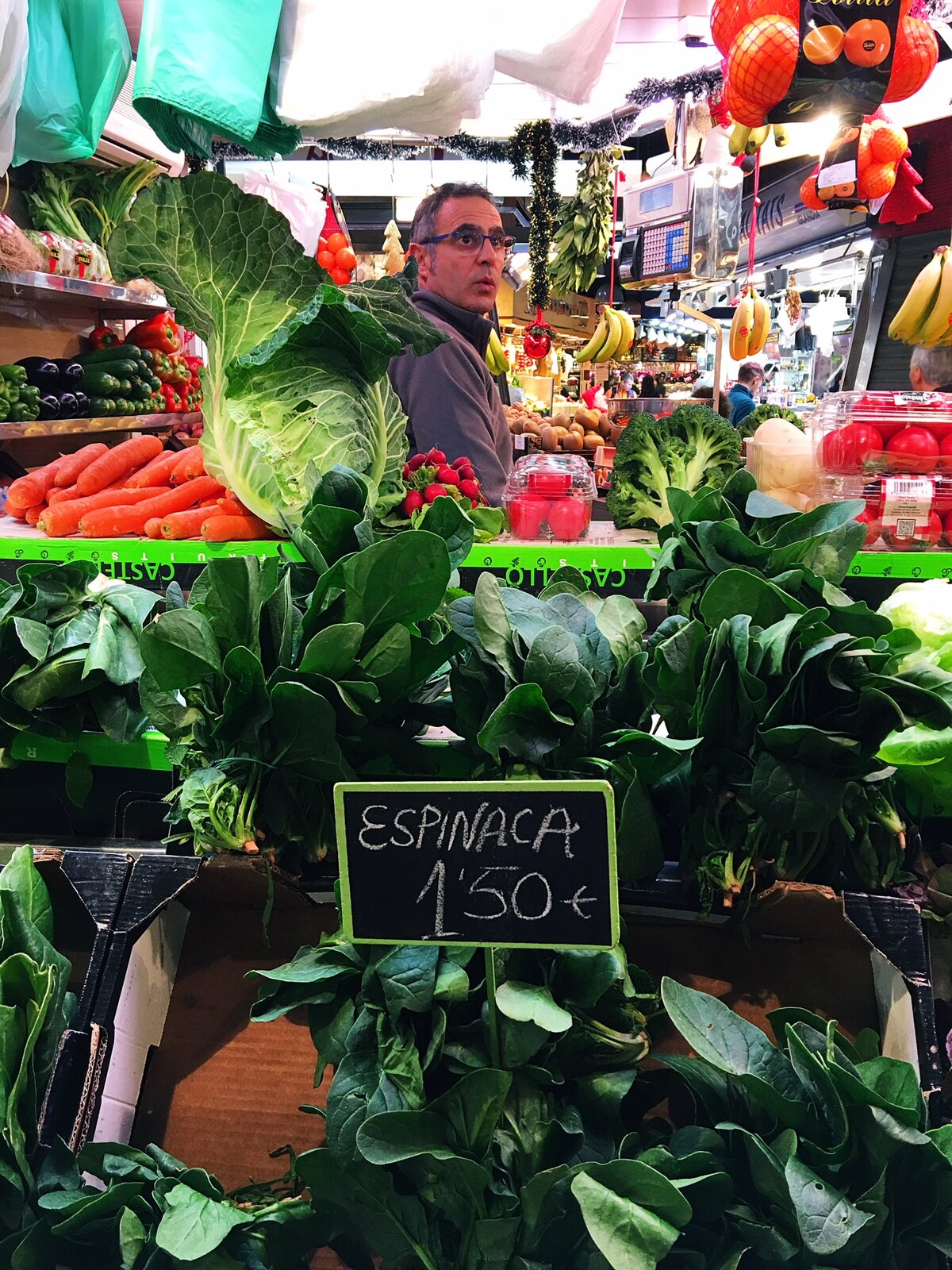 Although there is a tourist presence at the market, this is also a place where locals come buy their meats, fish and produce. Half the fun of being there is watching the locals interact with each other and with the vendors. 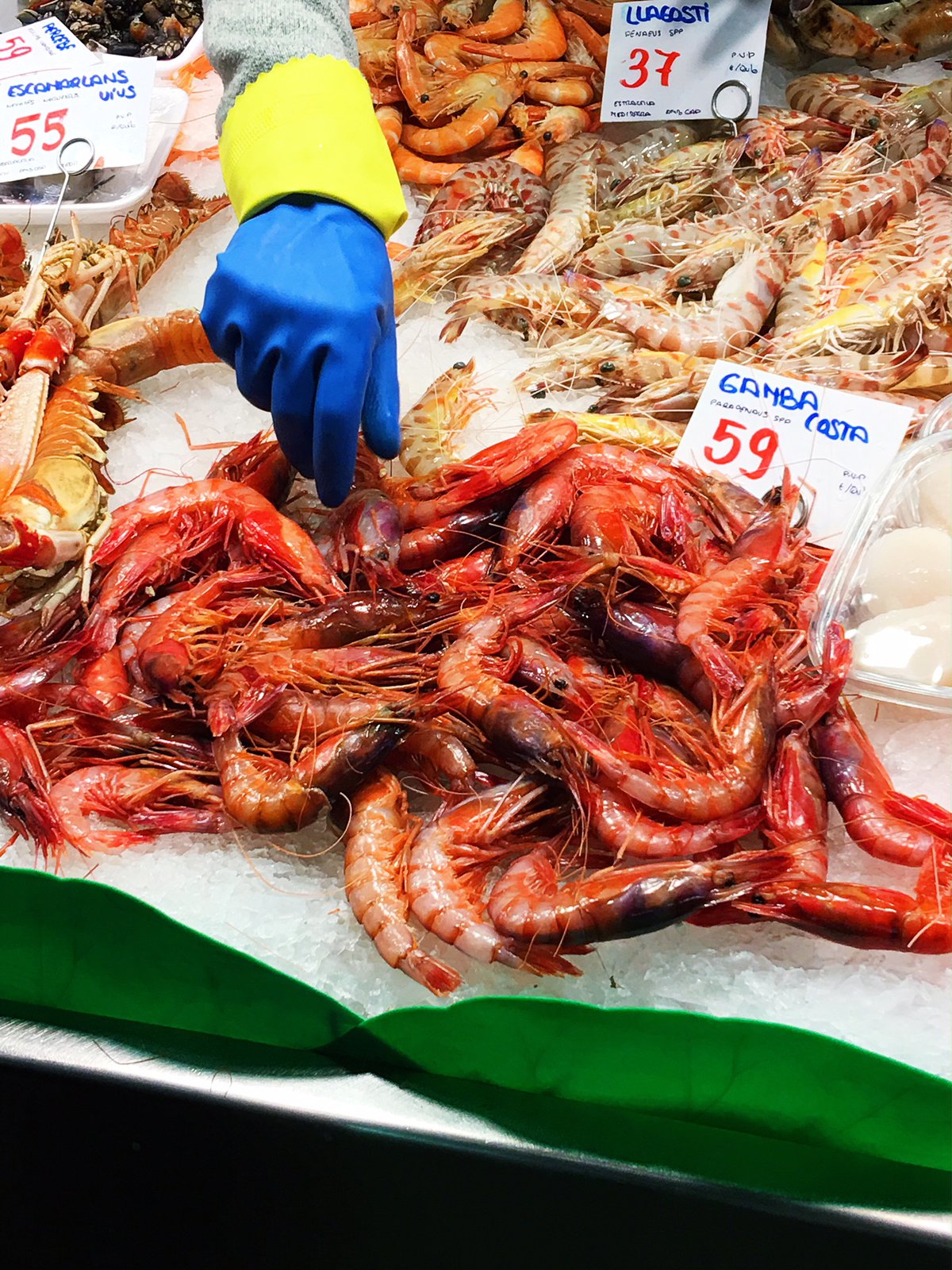 You also get a keen understanding of Mediterranean cuisine, and how it is driven by the array of fresh, seasonal ingredients. 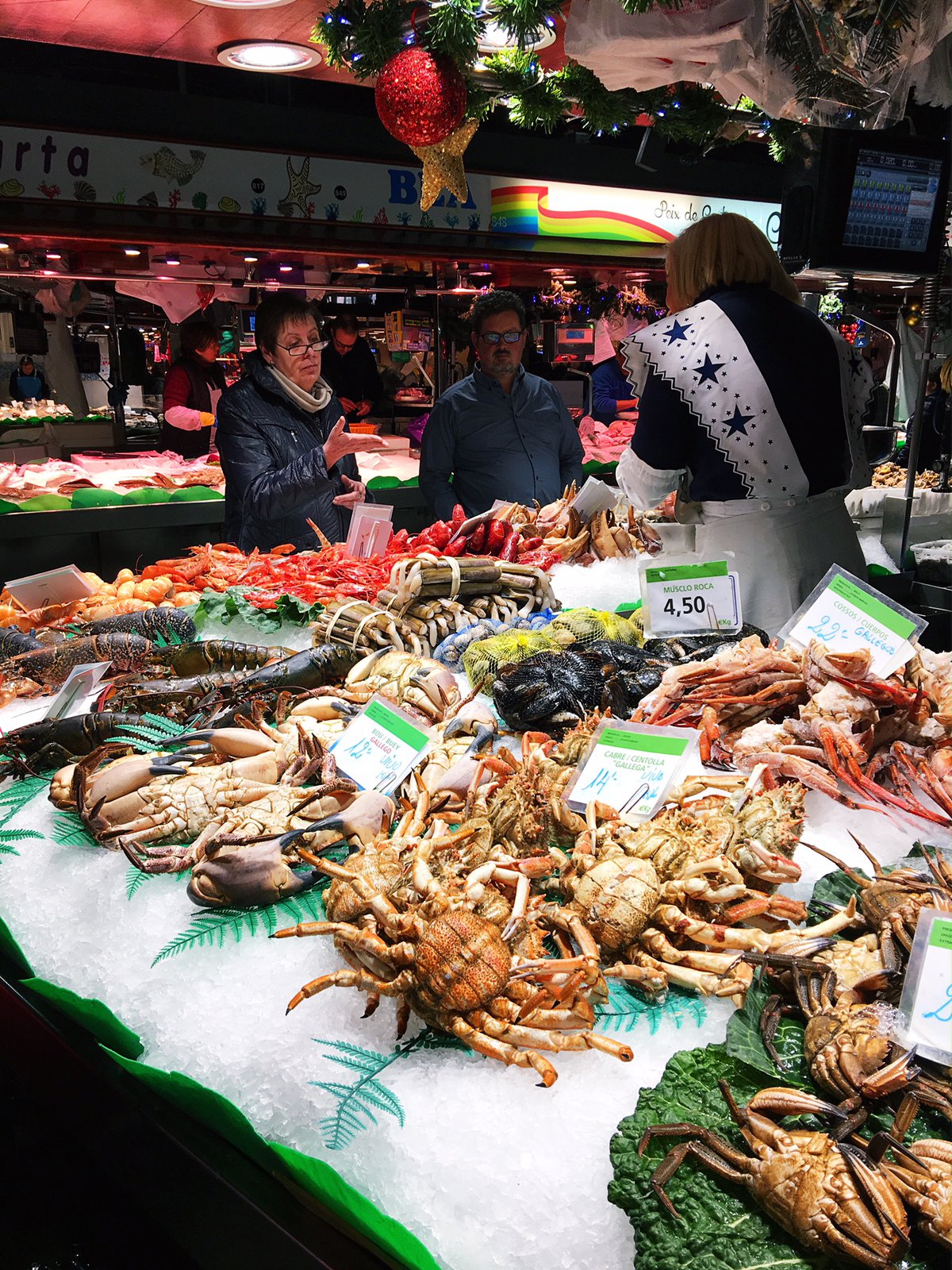 When I travel in Europe I like to stay in vacation rental apartments instead of hotels. I love being able to shop in local markets and eat some meals at home, others at cafes and restaurants. Even if you’re just buying ingredients for a salad or something super simple to cook at the apartment it is so much fun shopping at La Boqueria! You can buy everything you need for a simple picnic or a giant dinner party, or anything in between. 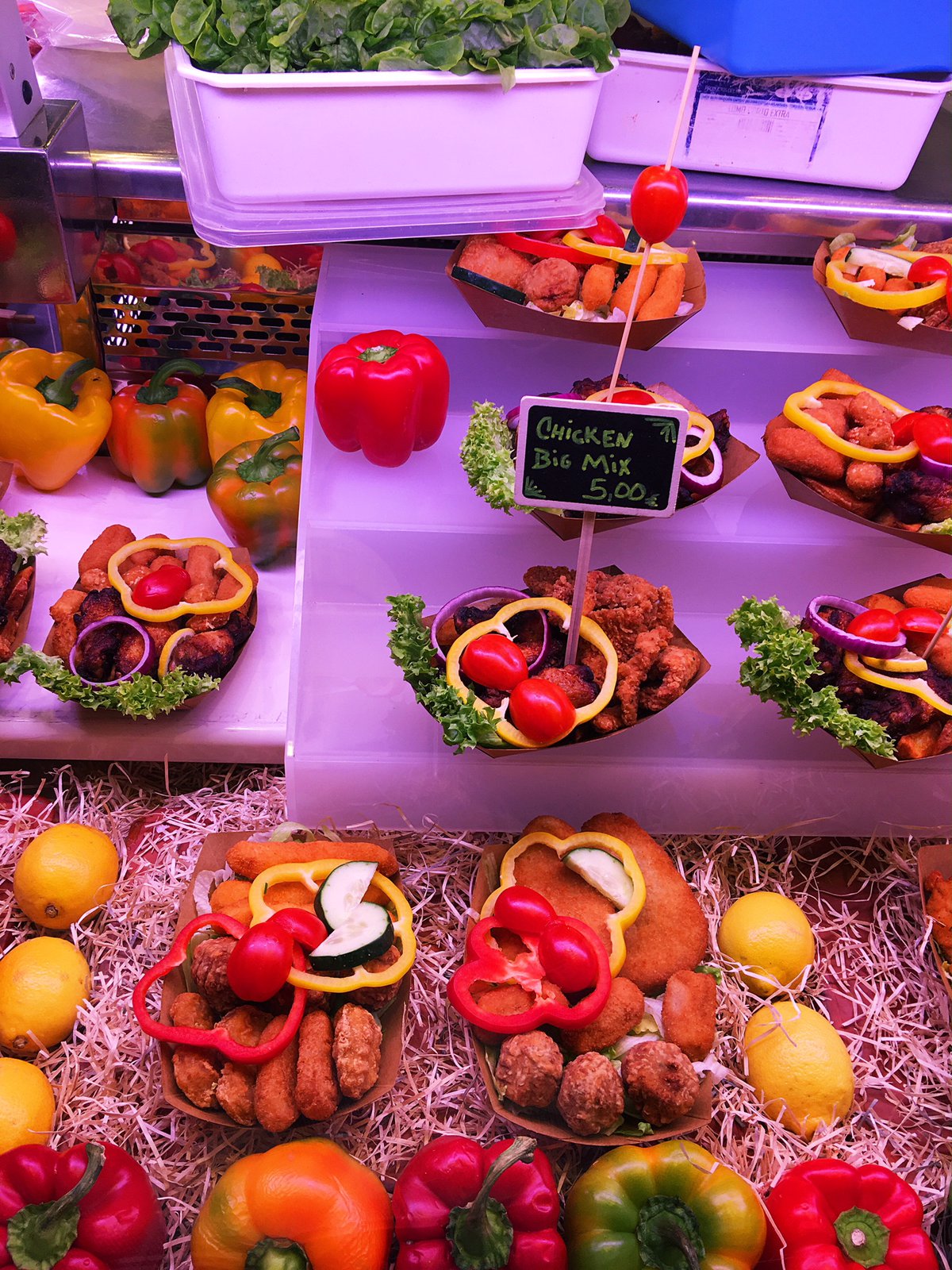 If you are only in town for a day, or are staying in a hotel, or don’t want to cook while you are in Barcelona you should still go check the market out. You can buy snacks or a takeaway lunch, or just visit it for a look around. 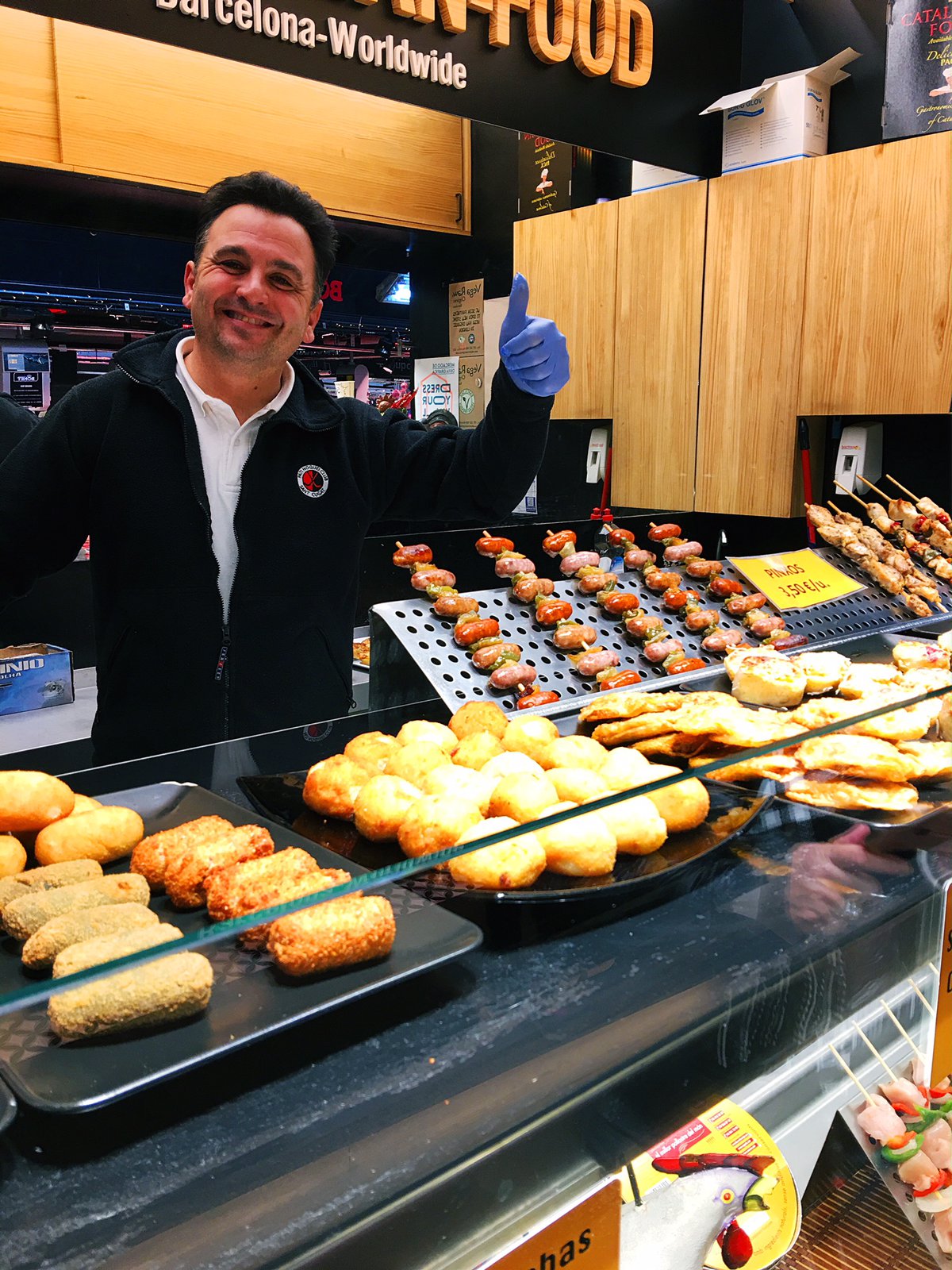 Before I leave La Boqueria I like to have a glass of cava (the Catalan version of champagne) and a snack at Pinotxos, the bar at the entrance to the market. 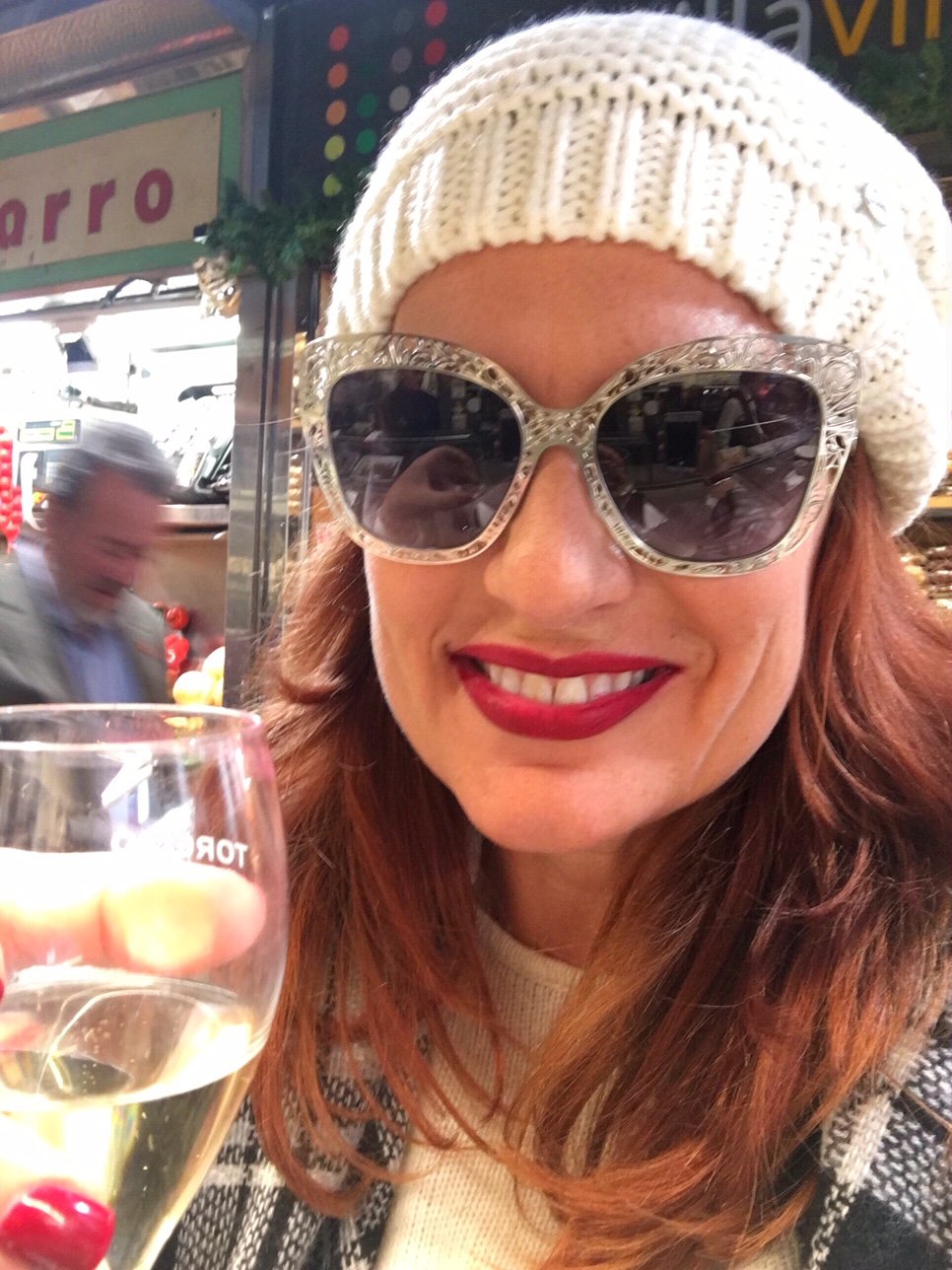 Pinotxos is family owned and family run, and has been around since long before my first trip to Barcelona a lifetime ago. It’s kind of fun to go back there after years and still see the same faces behind the bar! 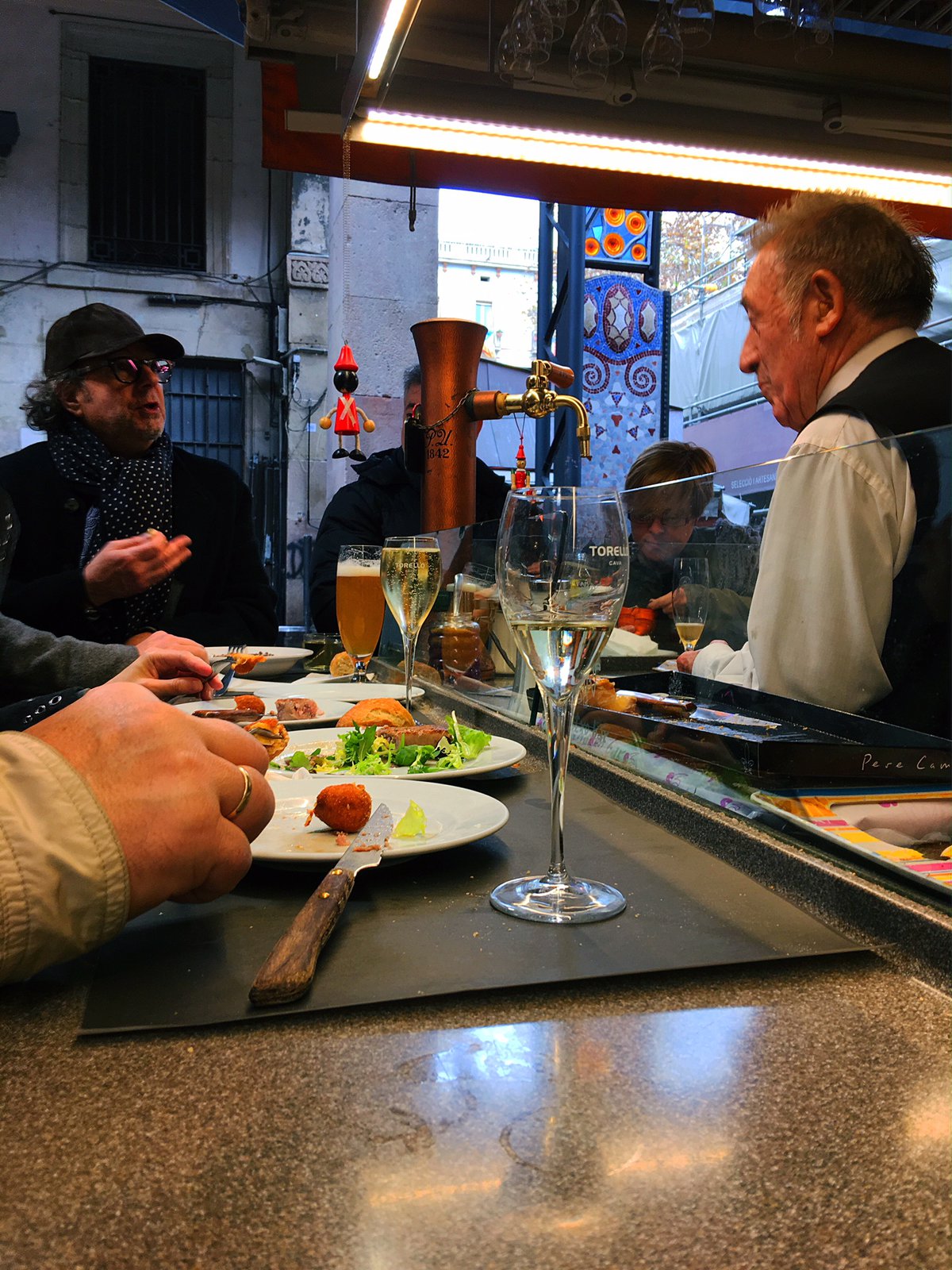 Barcelona, like many popular European cities, has a problem with pickpockets. They are incredibly quick and incredibly wiley, so any time you are in a crowded place such as a market or any major tourist spot you need to be super vigilant and very aware of your belongings. Keep you hand on your handbag at all times. You ideally should wear a cross body bag and keep it close to your person at all times.

Travelon makes an anti theft cross body bag that is perfect for travel. A cable running through the shoulder strap makes it slash proof, the body of the bag itself is slash-proof, it has RFID blocking slots for your credit cards and passport, keeping the digital information on your credit card magnetic strips and the digitized information on your passport unhackable. The zippers on the bag have caribiners that prevent pick pockets from slipping the zipper open and getting inside your bag. You can also loop the shoulder strap through your seat so no one can grab it and run while you are eating. You can find this bag online at The Container Store in a variety of styles.

See the video below for more details.