Oh yeah!!! Just got back from having way too much fun at the NHRA Las Vegas Nationals.

Two years ago I had never been to a race, and had exactly zero interest in going to one either. But then I booked some photo shoots with a few of the teams, shooting promo pieces and sponsor stuff, and after my first day at the track I was hooked.

Funny Car driver Tony Pedregon nailed it when he said that until you actually go to a race, you really don’t get what its all about. I try to explain to people that you actually can feel the sound, but only those who’ve been, get what I’m saying.

Anyway, this past weekend was strategically very important for the teams, as it was the penultimate to the big daddy finals in Pomona California November 12 – 15.
It was a crucial weekend for those drivers and teams in the chase for the championship, and every round was tension filled (and wild and exciting!!!).

I was lucky enough to be there with some really fun friends. John Amorosano is known nation wide on twitter to NHRA fans as @NitroJohn. Every weekend he calls the plays, live, and the NHRA nation is able to keep up with the scores as its all happening. 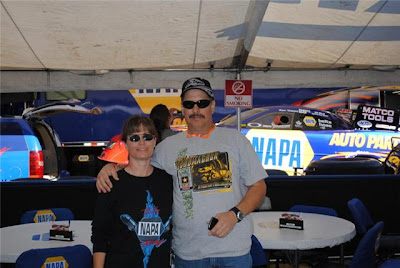 NitroJohn and Jeni Amorosano – two of the most fun people I am lucky enough to know!

We were guests of Don Schumacher Racing (D.S.R), home to 7 of the most exciting teams.
I hadn’t expected Don to be there greeting guests as we arrived. I was so impressed with his friendly and fun demeanor, and really thought him the most gracious host! 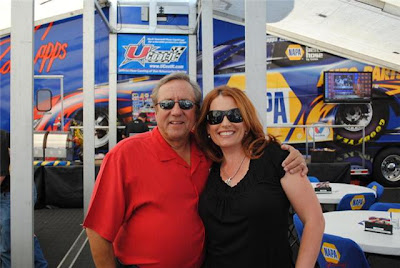 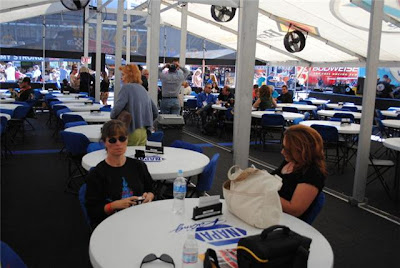 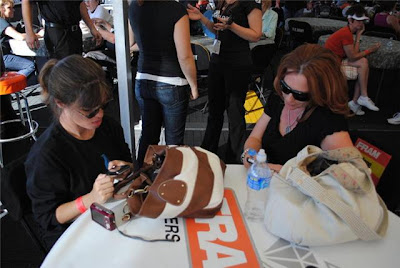 after each round we’d come back and I’d fill the twitter gang in on the goings on. I was also tweeting the races for NitroJohn, who was working the cameras.

We spent most of our non race time in the NAPA hospitality suite, and that’s where one of my favorite Funny Car drivers, Ron Capps is. 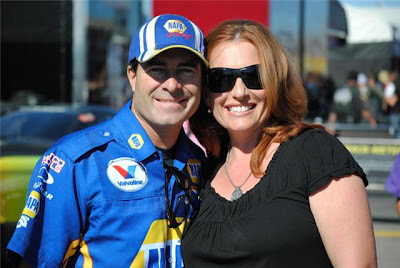 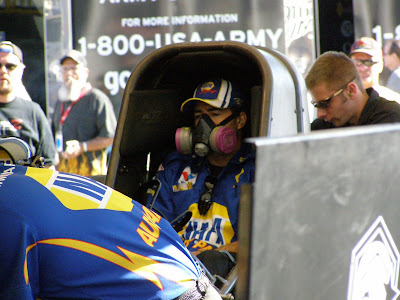 Capps warming up the engine pre-race. 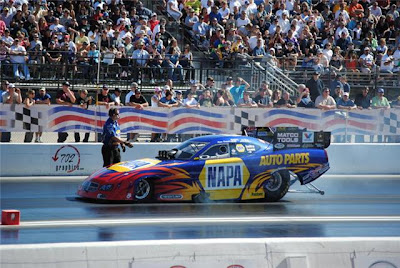 The Napa Autoparts Capps-mobile, post burnout, ready to tear it up at, oh, 300 mph!

He is such a character! If you follow my blog you’ll know that I’ve posted a few of the hilarious NAPA commercials that Ron does with fellow NAPA sponsored racer, Nascar’s Michael Waltrip.

D.S.R is also home to Funny Car drivers Matt Hagan, and Fast Jack Beckman, who made it to the finals on Sunday, and although he went 303 miles per hour with a 4.15 second run, was just edged out of the win By Robert Hight who went 304 miles per hour and got there in 4.12 seconds. 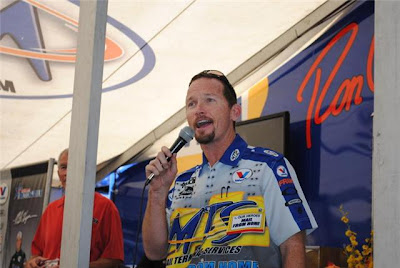 This is Jack Beckman. Really funny cat! I cheered so hard for him in the final, but evidently not hard enough, because Hight managed to slither by him. By .03 of a second 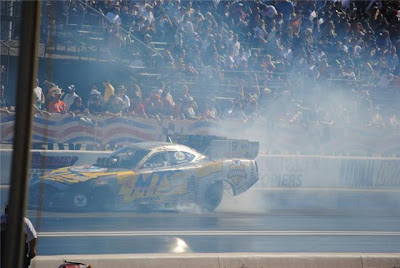 This is Jack’s funny car doing his burn out. He and his main sponsor, MTS did this fab thing where we all got postcards to send messages to soldiers in Afghanistan and Iraq. MTS is delivering them for free.
I wrote nice stuff, not my usual nonsense… 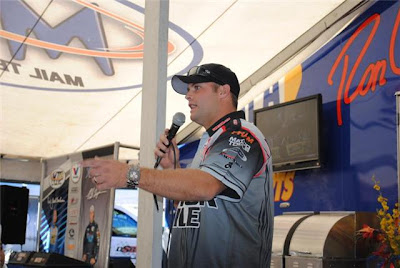 This is Matt Hagan. He rounds out the DSR Funny Car Team. 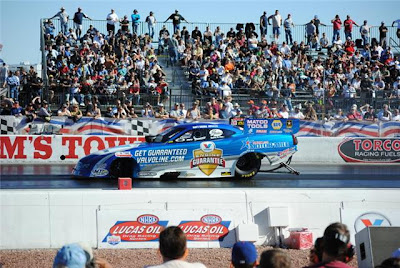 and this is the Hagan-wagon. Doesn’t it look cool?

There are 3 Top Fuel Dragsters at D.S.R.
Tony Schumacher drives the US Army car, and is in the leader in the points. 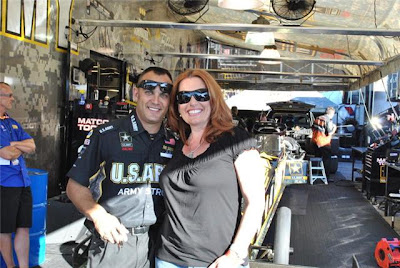 Tony Schumacher in his US Army pit. 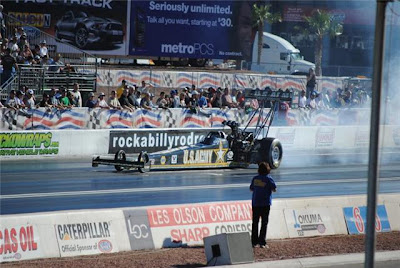 Cory Mac drives the Fram car, and in fact, drove it all the way to the semi finals on Sunday.
I’m always cheering for Cory. He’s on twitter @Cory_Mac_TF 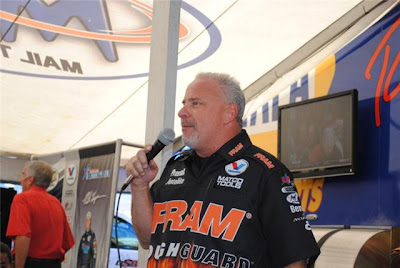 it only looks like karaoke. Really its driver intro’s in the Napa suite 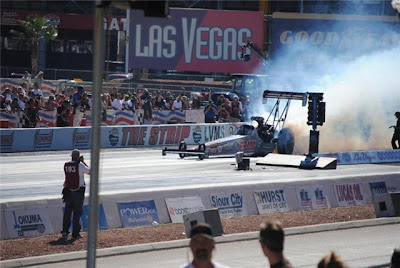 Antron Brown raced motorbikes for DSR before heading off to drive a top fueller elsewhere, but as of this past week (or so) he and his Matco Tools Top Fuel dragster are at DSR 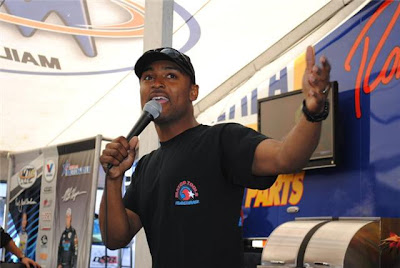 Here’s Antron at the driver introductions 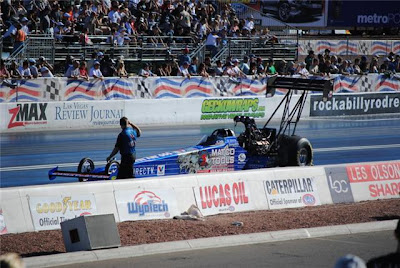 …and here’s his ride. He swept the Western Swing this summer, which is crazy hard, crazy cool!

DSR also has Matt Smith, who rides motorbikes for them. 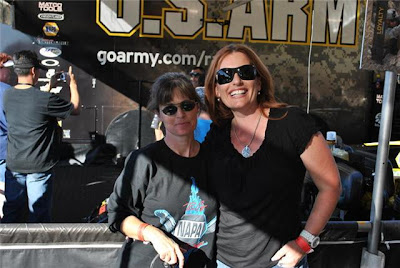 It was such a fantastic day, and I really do have to thank DSR for being such amazing hosts!

And, of course, I can’t write about Ron Capps without posting yet another of his hilarious Napa commercials with Michael Waltrip.