I have this theory when traveling. If Plan A goes awry, Plan B is invariably far better anyway.

And that’s how it was when I went to Caserta.

As I was running up the stairs to the platform the train was pulling out of the station. My perfect plan to spend hours and hours at Caserta had just gone sideways. The next train wasn’t for over an hour.

Read about the gardens of Caserta Palace

So I walked it, which turned out to be the most perfect option! It was a gorgeous December afternoon, sunny and t-shirt weather, ideal for strolling through palace gardens. Had I rented a bike I would have been stopping every couple of minutes to take photos anyway, so I was happy as a clam. The entire 7 km round trip I only saw maybe 40 people (including the workers), so it was almost like having the entire place to myself.
See images of the gardens here

Plan B got really great once I walked inside the palace itself, because that late in the afternoon on a Monday in December I literally was the only person there.

If you have ever been to any palace in Europe you will already know how maddeningly full of tourists they all are, all the time.

Normally you can’t get a clear picture of anything because there are so many people in the way.

This by contrast was absolutely surreal. There was just me and and empty palace.

Every now and then a room would have a worker in it, but I basically could have run naked through the place and not encountered a soul!

At one point in one of the grand salons I decided to take advantage of having the place to myself, and played some Verdi on my iPhone. 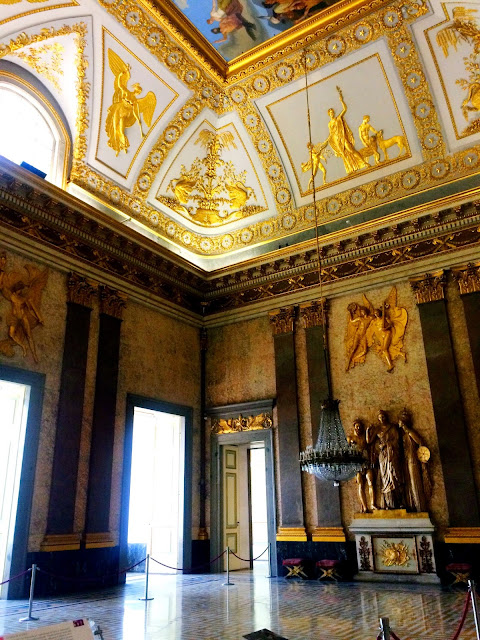 With no one to stop me I lay down on the floor of the Throne Room and took in the ceiling while La Traviata played.

It was brilliant! Then, because you only live once, I danced my way around the entire salon to Verdi then Delibes, whirling round and round like a fool. The kind of red haired fool who has an entire palace all to herself.

I sat next to an Italian ballroom dancer once on a flight to Sicily. We have always stayed friends, and I kept thinking how much fun it would have been to have him there with me, dancing around my private palace.

Italy has the greatest art in all of the world, none of which is in the palace of Caserta.

To quote Alessandra Stanley of the New York Times, “Art lovers shudder at the lèse-majesté ”
but in all honesty it is actually part of the mad-charm of this place.

Caserta is bombastic yet delightful. And it is enormous! It gives you an incredible insight into the world that was, and you can’t help but be impressed by how magnificent it must have been in it’s heyday. 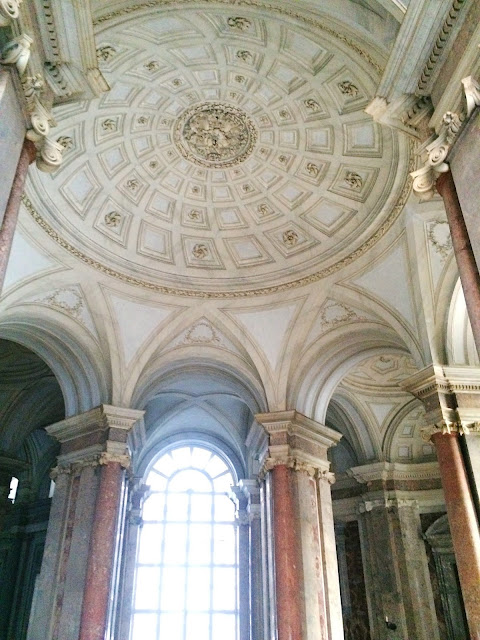 It is definitely worth taking the time to visit, and I know that I will go back over and over.

Unfortunately the chances of me having the palace all to myself ever again are slim to none.
I found out that earlier that day there had been a few thousand visitors to the palace. My missing the first train had meant that I arrived as they were all leaving. Had my day gone as planned I would have been there with the masses, and would not have had an entire palace to myself.
I also discovered that the day before 10 000 visitors had come to the palace.

To end this perfect Plan B day I asked the man in the palace bookstore if there was somewhere nearby where I could have a glass of wine before taking the train back to Salerno.

He drew me a map, told me I could take in the town’s Christmas tree while enjoying a glass of the local Moio, and still have ample time to stroll to the train station 5 minutes away.

When I got back home I did some research on Maria Carolina. She, like her palace, was just fascinating. If you are heading to Caserta read up on her first.

Read my post on the Caserta Palace Gardens, and see photos of the statues here.