I love the history, I love the hustle and bustle, I love the people, the ambiance, the vibe.
Rome is a walking city – the best way to experience it, to get to know it, is to hit the streets and walk. That’s where you get to see the color and fabric of a city, learn it’s textures and it’s smells and it’s sounds, and that’s they way to see how the real folk live.

Most people traveling to Rome seem to only go to the main sights – Colosseum, Vatican, Pantheon, Spanish Steps, Trevi Fountain, which although they are fantastic don’t really let you experience Rome. They just put you with a million other tourists jostling for a good camera angle. There is so much more to do in Rome
I’ve written before about things I love to do in Rome and about things you may not know about Rome but this week I want to tell you about some other cool things to do in Rome. So each day it’s going to be something new. Check in each day this week because there are some really fabulous places to add to your Rome to do list!

A short walk down the street from the Wedding Cake (Monument Victor Emmanuel II) and the Forum you find the lesser known but totally fantastic Teatro Marcello. It looks like a mini Colosseum. 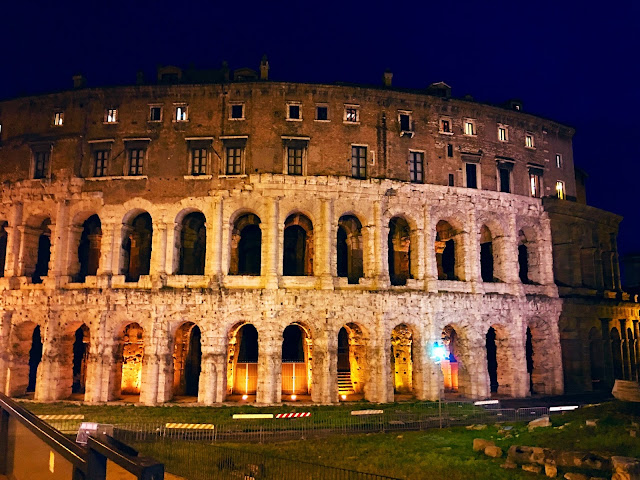 Completed in 11BC by Emperor Augustus and named after his nephew Marcus Claudius (who died before it’s completion), the theater was actually the brain-child of Julius Caesar. Theaters were traditionally built from wood, and would burn down or otherwise succumb to destruction, so Caesar decided to have a permanent theater built.

It is still is use today.


I always take people to see the Teatro Marcello, and invariably we are the only people around. Walk in any direction from the Teatro Marcello and you will find amazing things to look at and places to explore with very few tourists blocking your view.

Teatro Marcello is wonderful at night. From there walk down to the river and take in the view of the bridges at night with the Vatican in the background.