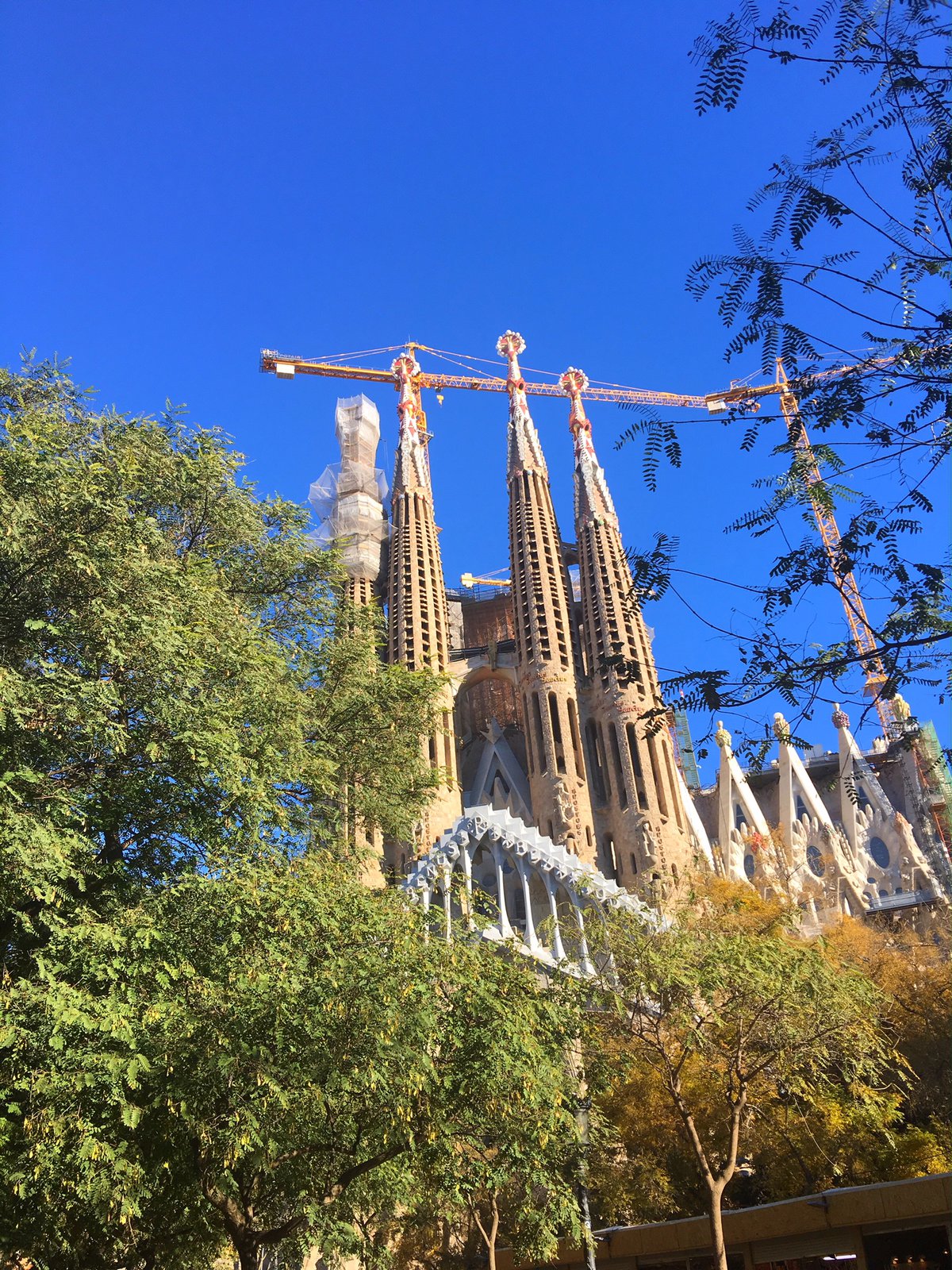 No trip to Barcelona is complete without a visit to Antoni Gaudi’s temple to God, the Sagrada Familia.

Gaudi took over the design of the Sagrada Familia in 1883, knowing that his cathedral would not be completed during his lifetime. Construction initially was funded by donations, and stopped and started several times due both to lack of money, and wars. Now it is financed by ticket sales, so although it is a little pricey, your ticket actually is making a difference!

I am intrigued by the architects and workers who over the past decades have given their all to this project, knowing they wouldn’t be alive to see its completion. The current crew will hopefully see the cathedral finished, as the planned end date is in 2026.

RELATED POST: WHY YOU MUST VISIT LA BOCQUERIA MARKET IN BARCELONA

Tickets are timed at Sagrada Familia, with a half hour window to enter. I suggest ordering your tickets online, and then arriving a half hour prior so that you have time to walk the outer façade before getting in line to enter. If your ticket is for 11 – 11:30 am entry, get there at 10:30 am. 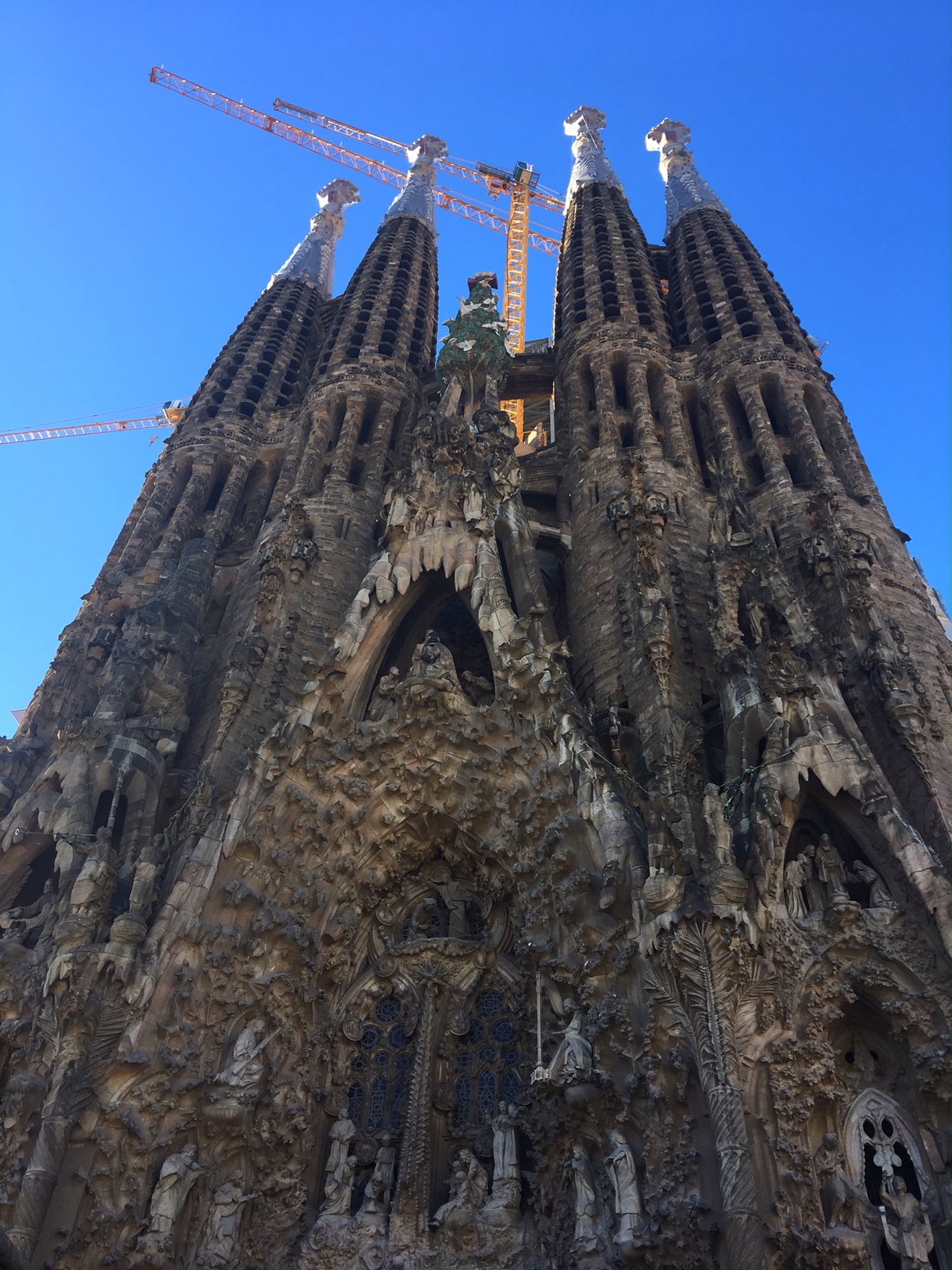 Use the eastern façade, or nativity side as your starting point. The sculptures on the façade are in more traditional form and they tell the story of the birth of Christ. 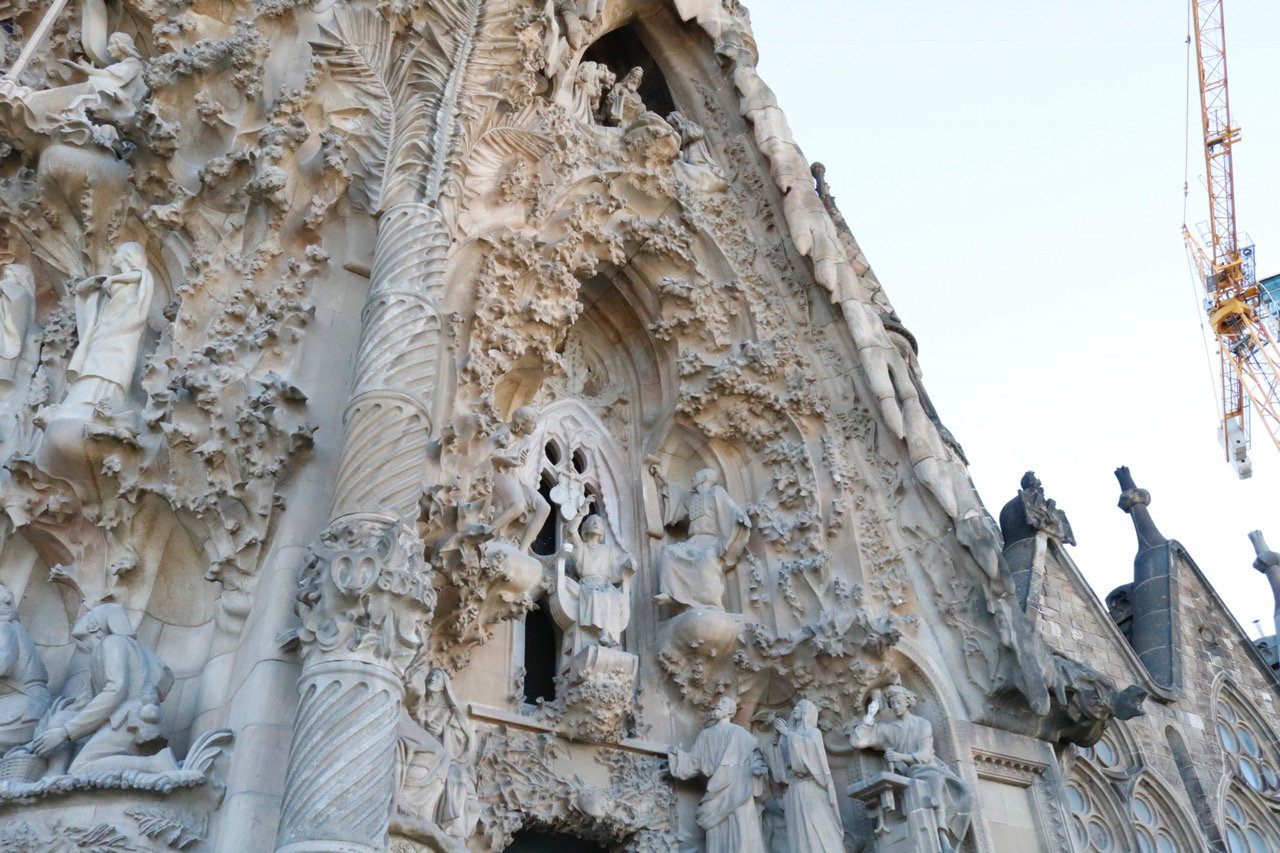 This side of the cathedral greets the rising sun, so as the sun comes up each day it lights up the birth of Christ. (If you are inside the cathedral in the morning the sun hitting the stained glass windows on the east side creates an explosion of blue light. It is magnificent!) 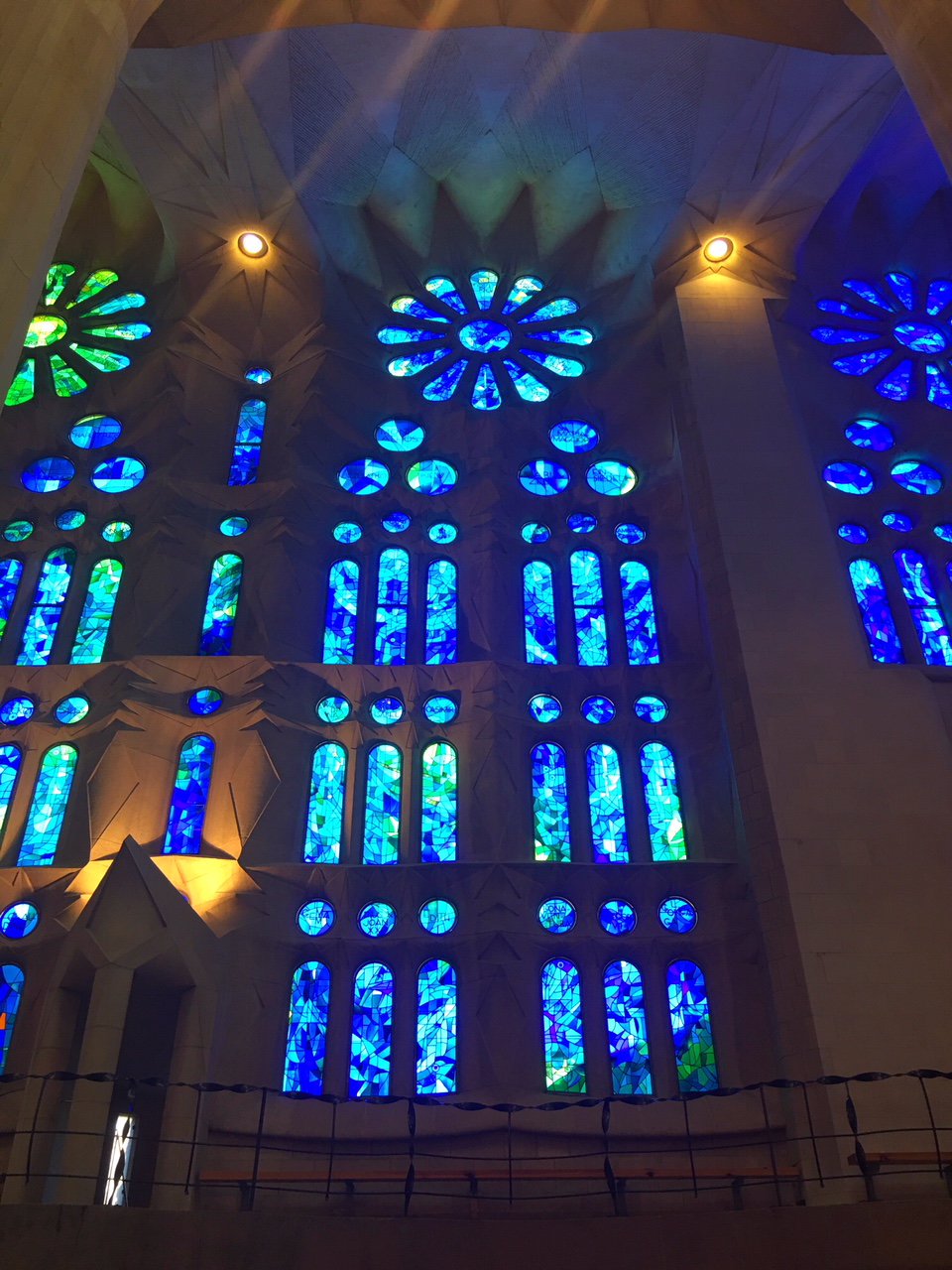 The southern façade is not yet finished, but will celebrate the glory of Jesus’ life.

The west side is the passion or death of Christ. This façade is quite modern and sparse, and the sculptures depicting the passion are intriguing. 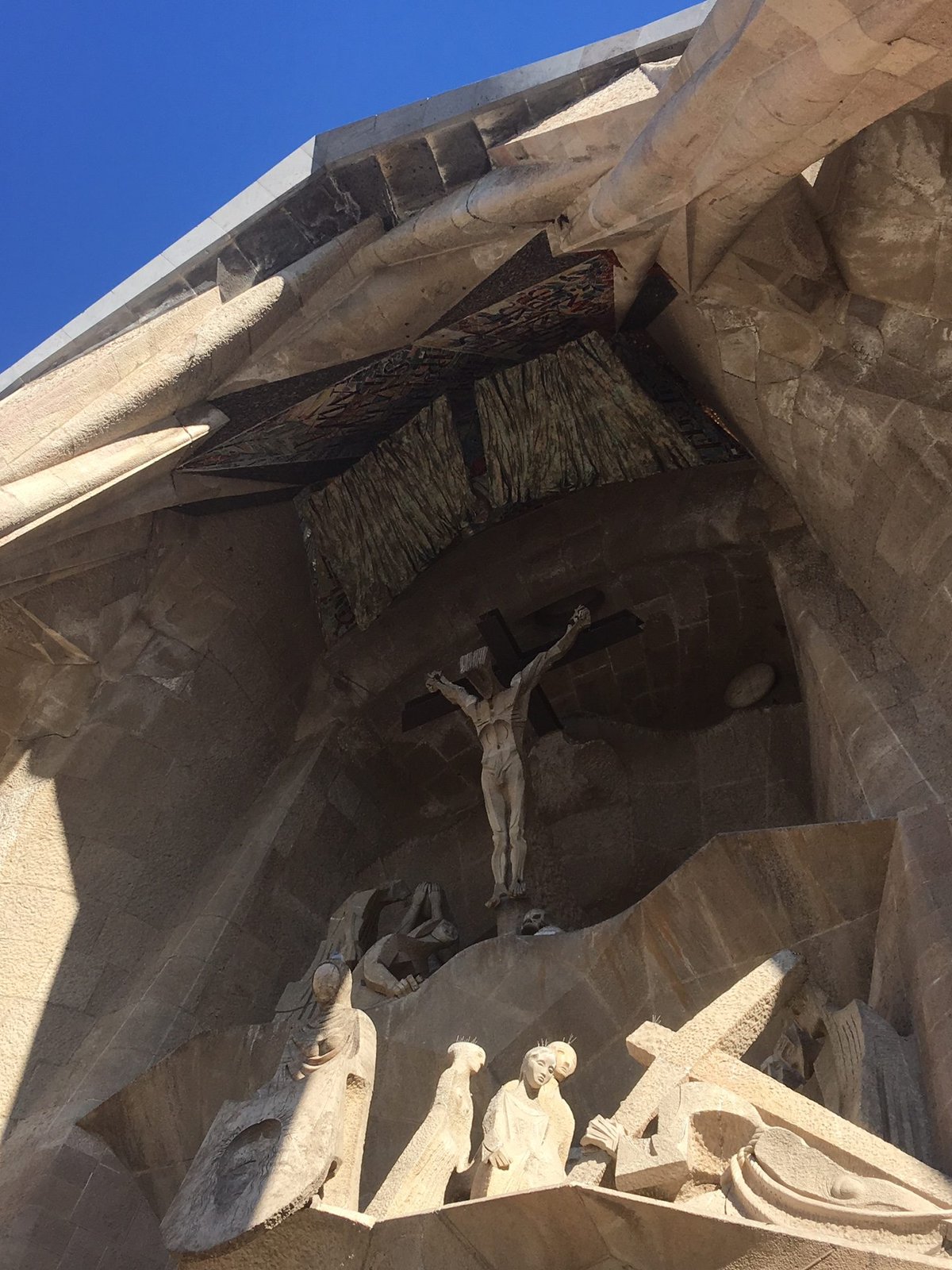 They are all blockheads, making the entire façade quite jarring. (yet completely brilliant!) 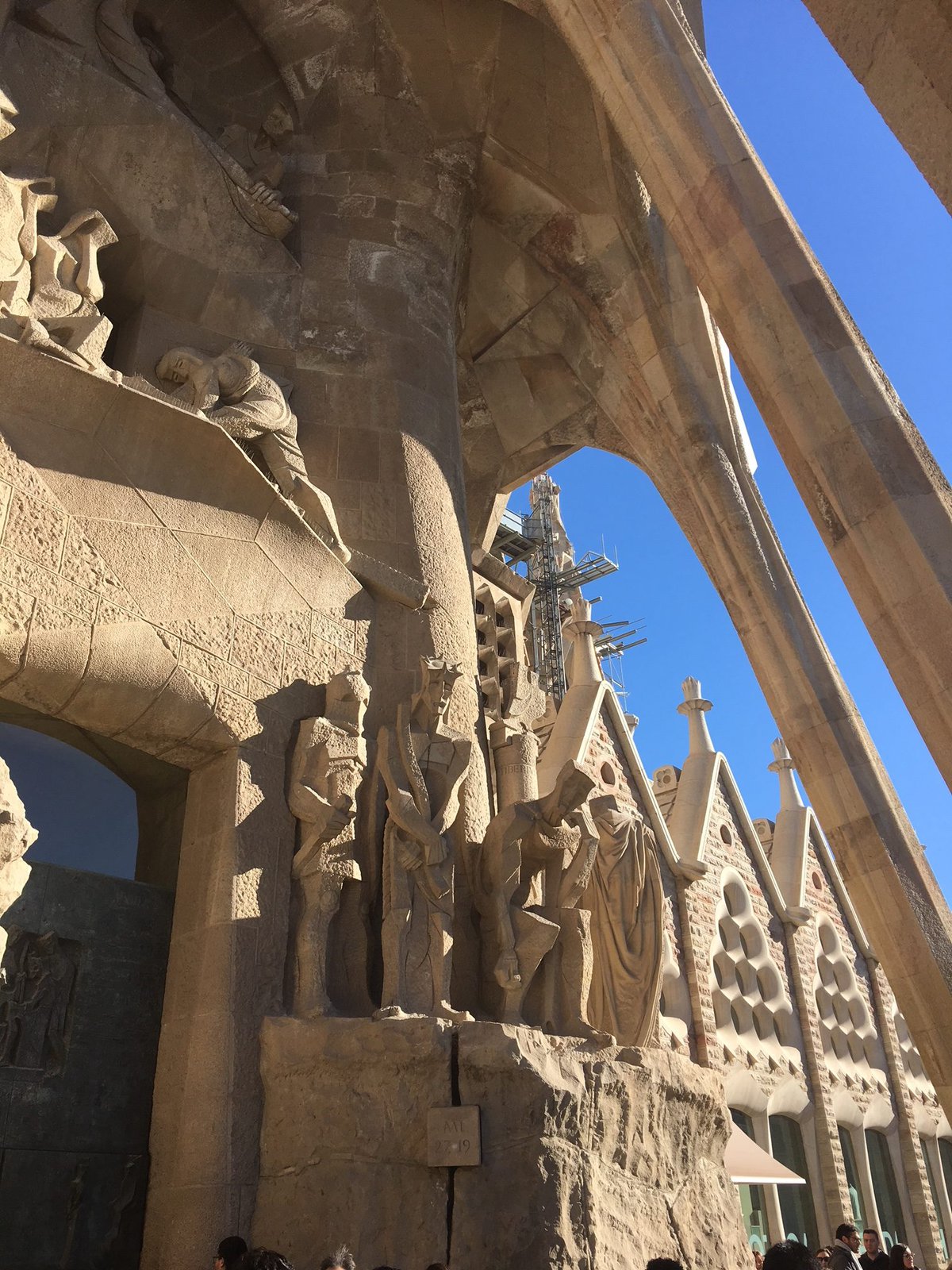 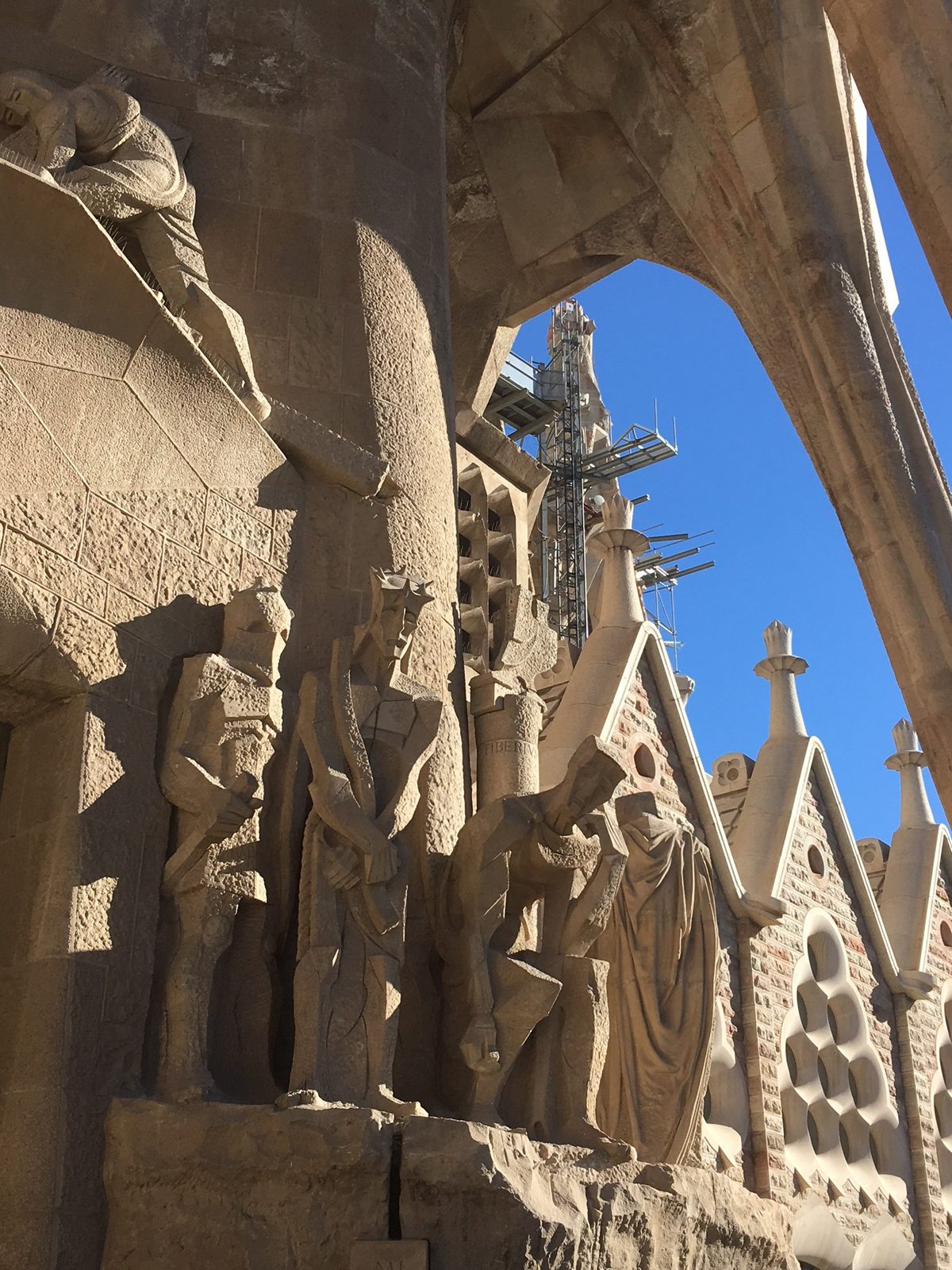 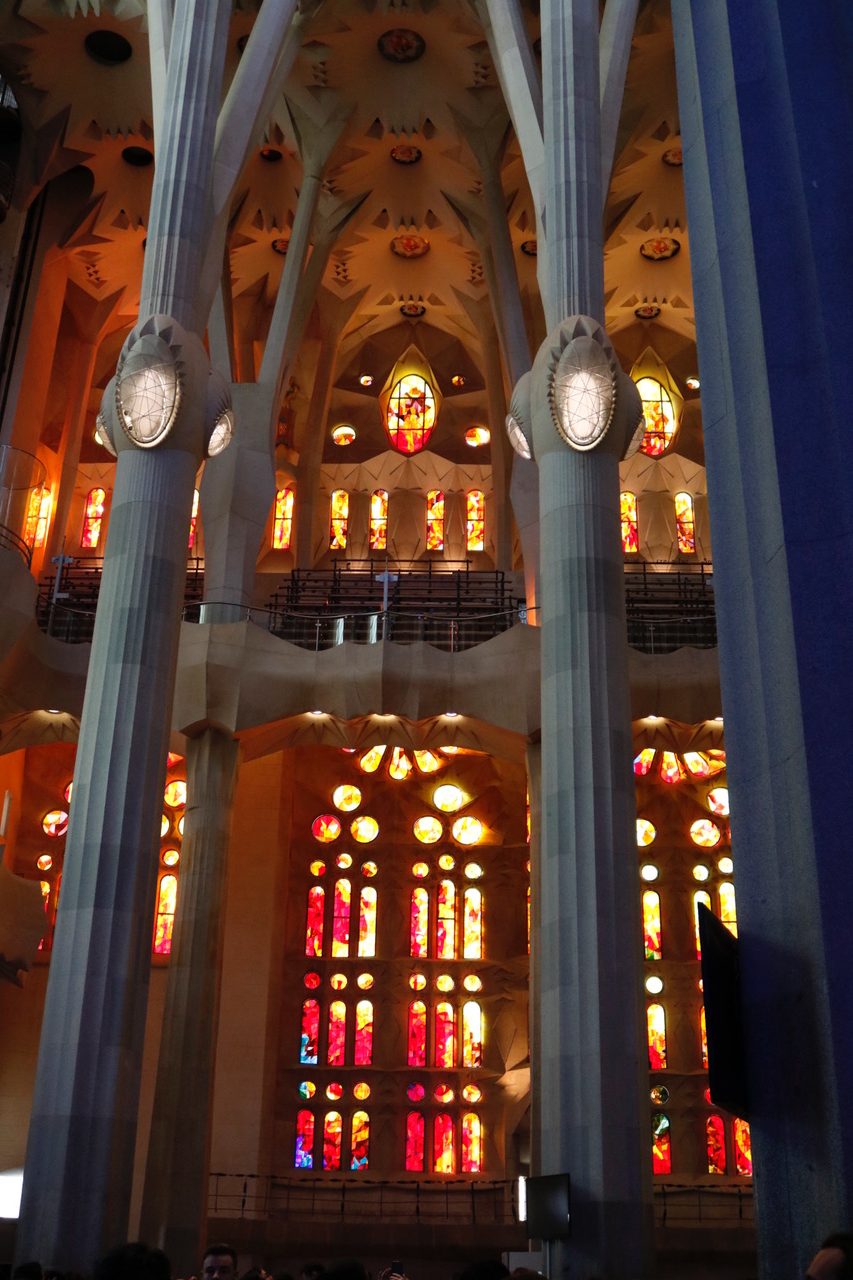 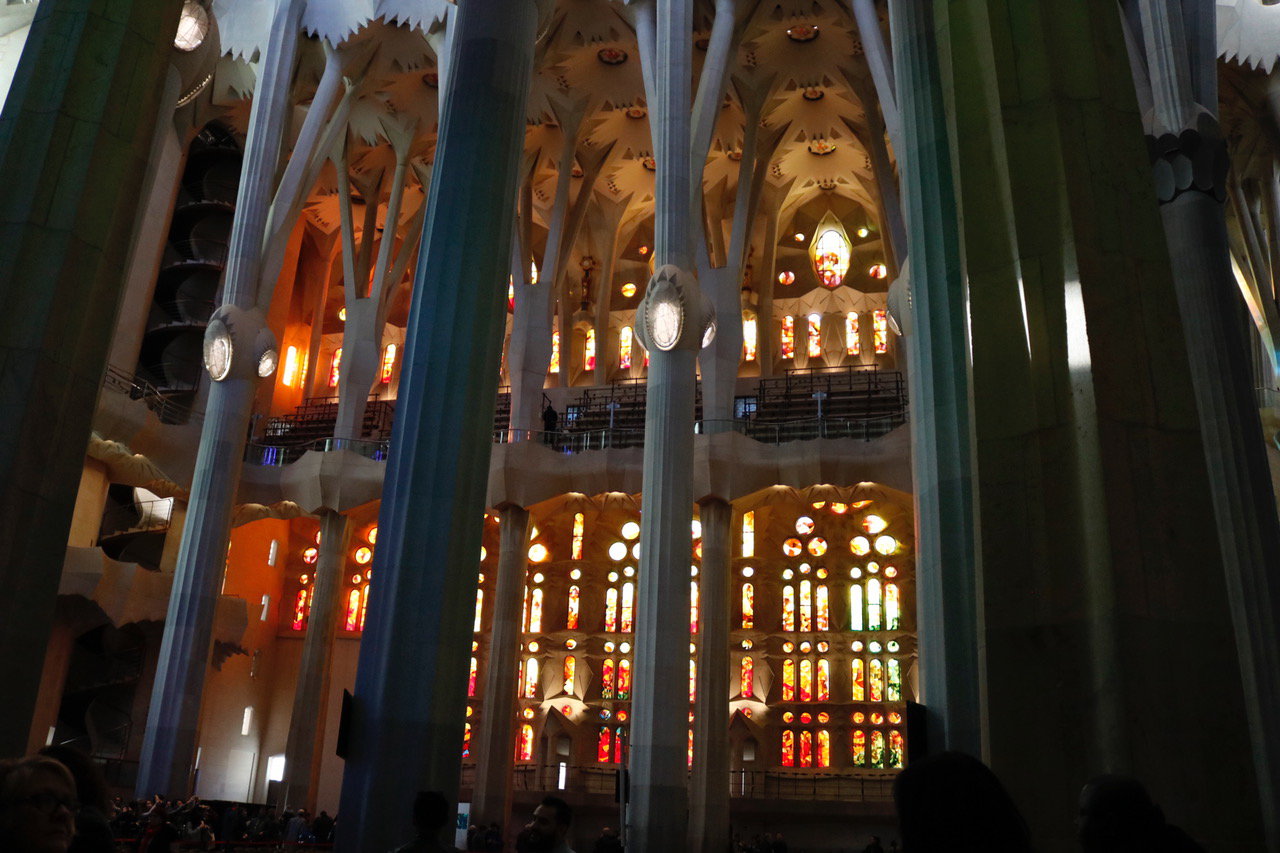 Walking around the outside of the Sagrada Familia take note of the facades and how dark they look. This cathedral is a total play on light and space, and as such the more you focus on the exterior, the more the interior will blow your mind!

It was explained to me that Gaudi wanted the exterior of his cathedral to represent a forest, the towers being the trees. I don’t know if that is true or not, but now it’s stuck in my head and every time I look at it I see his forest!

There are a total of 18 towers, organized in the hierarchy of Christian symbolism. The center tower is dedicated to Christ, surrounded by the four towers representing the gospels. The tower above the apse will be his mother, the Virgin Mary, crowned with a star. The remaining 12 towers represent the apostles.

The structures create a sense of elevation with their pyramid-style layout. The 12 apostles circle the outer edges each at 100 meters tall, the gospels makeup the next layer of the pyramid at 135 meters tall and the tallest will be Jesus at 172.5 meters tall, making it one of the tallest religious buildings in the world. The height of the Jesus tower was to show Gaudi’s respect for the work of God which in his mind should never be superseded by man. The highest point in nature around Barcelona is Montjuic at 173 meters, so the Jesus tower is just shy of that height.

When you walk inside it will completely take your breath away. The outside of the cathedral gives you no sense of how light and bright the interior is! If you have visited other cathedrals around Europe you will be familiar with their typically dark interiors, and you somewhat expect to see exactly that. The inside of Sagrada Familia is incredibly vertical and light and bright. Gaudi’s use of natural light is breathtaking. It is so incredibly modern and yet ethereal too. 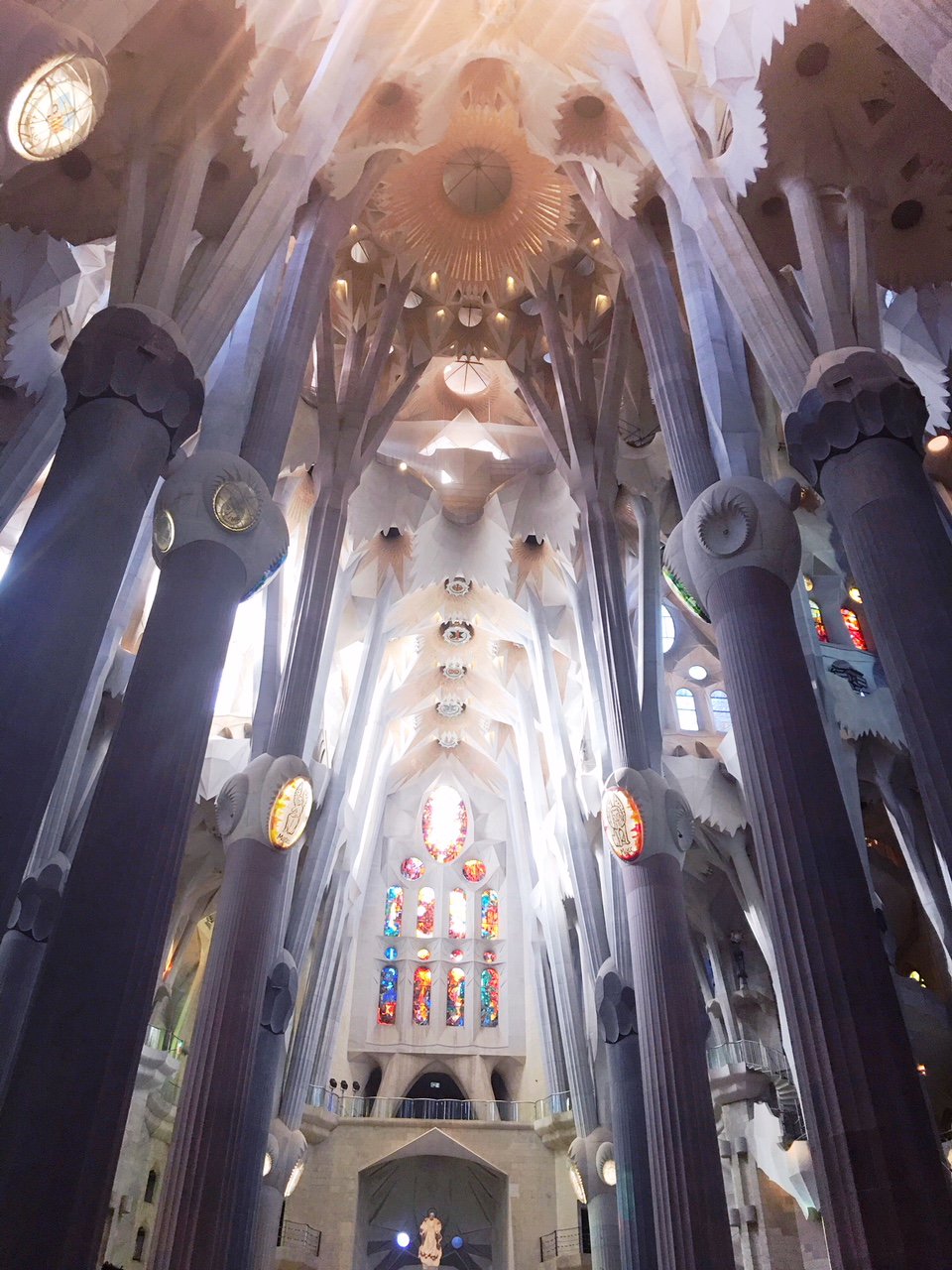 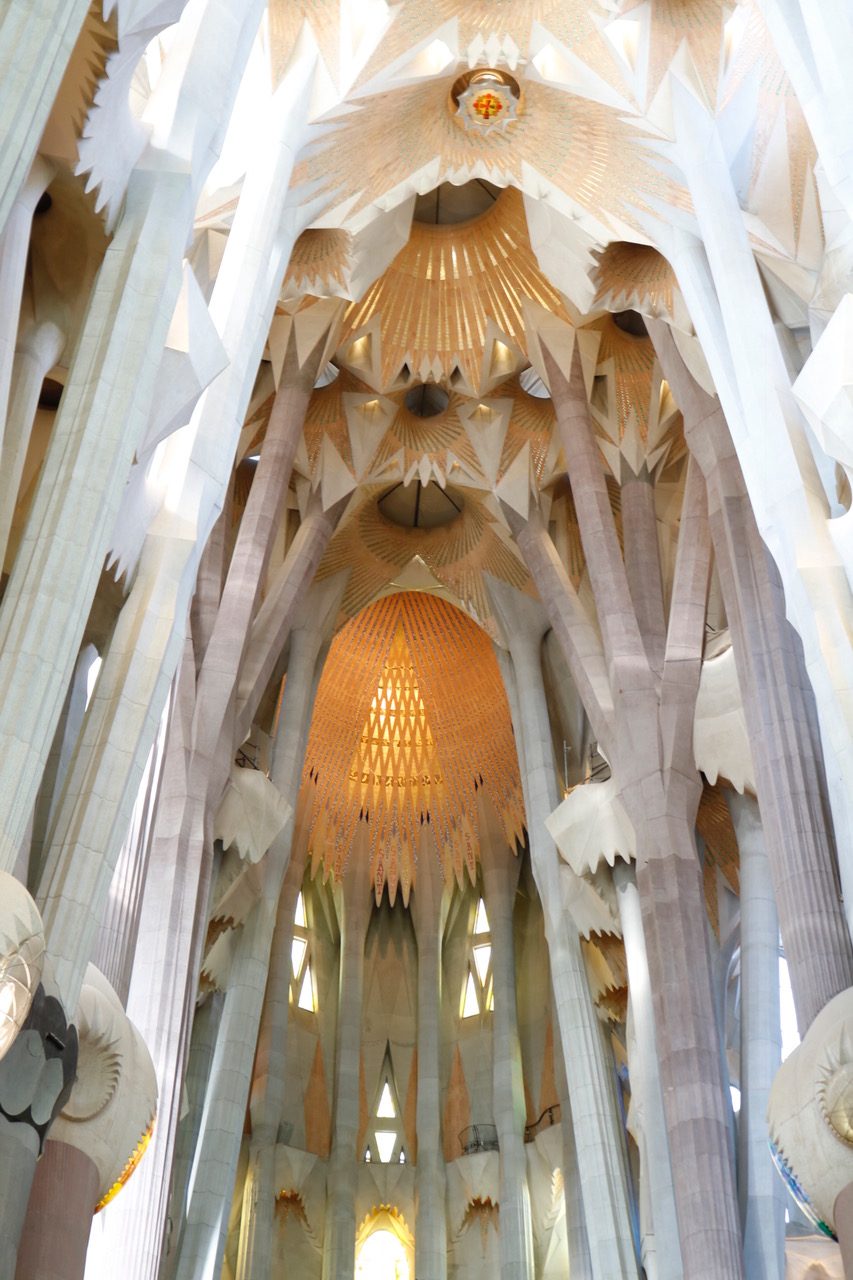 Colored light bounces off the stained glass, the soaring white towers feel like they are lifting you. Gaudi said that color was an expression of life, and this cathedral feels alive. 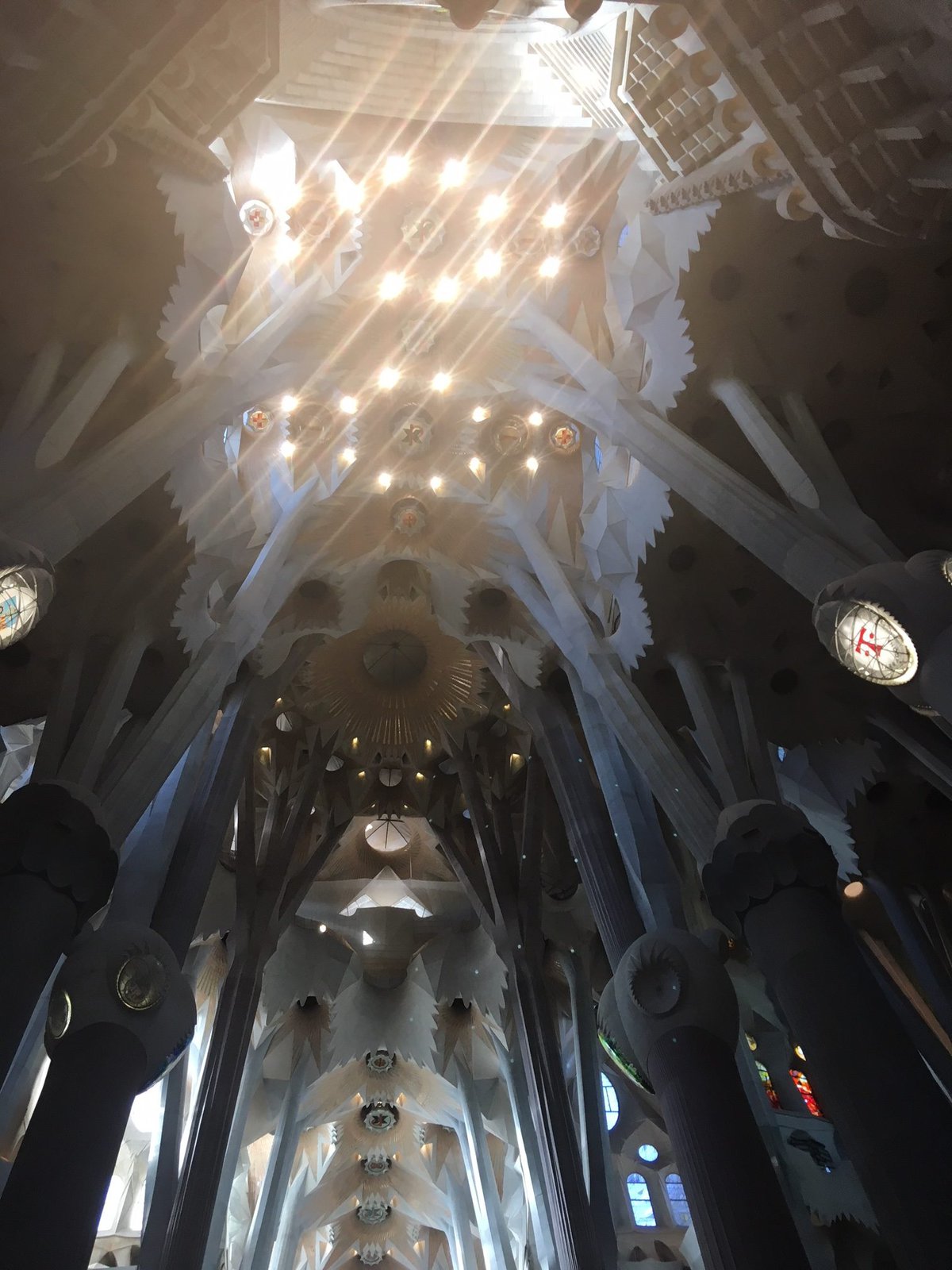 Christ is suspended from the ceiling, his crucifix hanging under an umbrella. The sight of it is disconcerting, jarring and yet also brilliant. 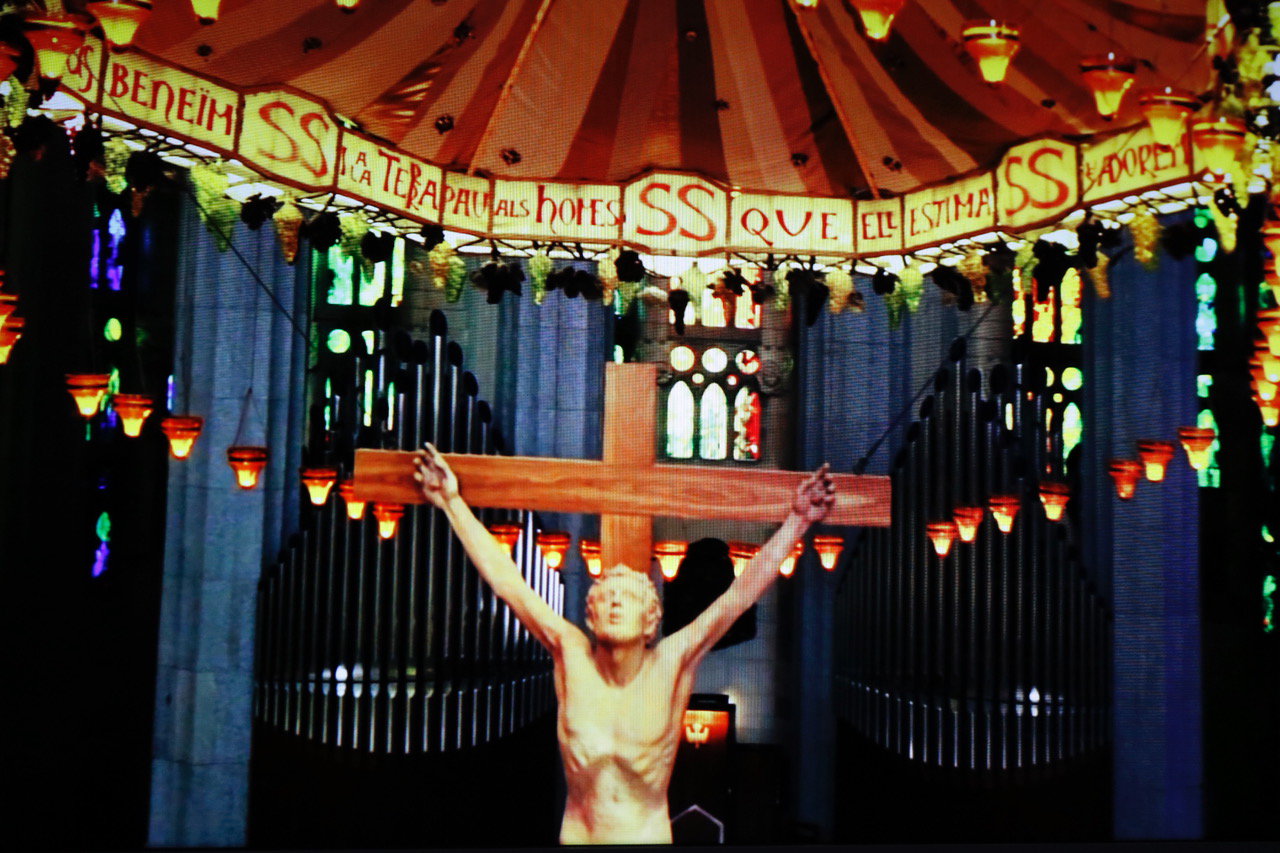 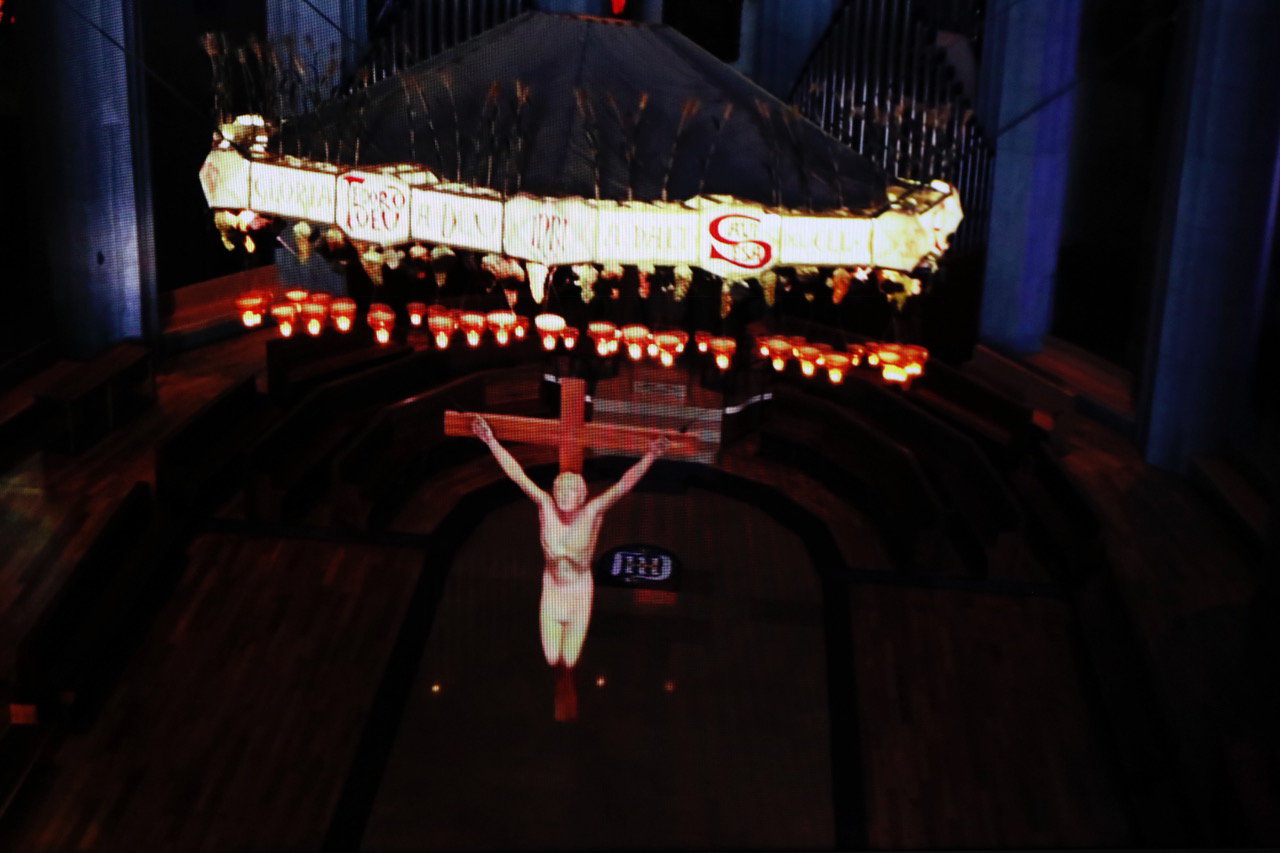 Next time I go to Sagrada Familia I need to have a guide explain every detail to me.

In order to understand the Sagrada Familia you first need to understand Gaudi, or at least know a little about him. He was one of the best known and most influential figures in the Modernisme movement, which took place from the late 1800s through the early 1900s. In school he excelled in geometry and mathematics, and entered the School of Architecture once he was 21, excelling in design, drawing and mathematical calculation. 5 years later after graduating he received his first architectural commission in 1978.

His reputation grew as did his commissions including the Casa Batllo, Casa Mila and Casa Calvet, then in 1883 he took over the design of the Sagrada Familia.

Gaudi’s work is highly recognizable, his style very distinctive. He lived via the three passions in his life: architecture, religion and nature. He thought about every tiny detail in his creations, infusing stained glass, ceramics, wrought iron and trencadis (wasted ceramic pieces) into his work. Rather than the strict, straight lines of traditional architecture, Gaudi’s ideas rolled and swelled like waves and took on forms in nature.

Initially when he took over the design of the Sagrada Familia Gaudi still worked on other projects, but in 1914 he abandoned all other work and just devoted himself to his religion and to his cathedral, living and working there the last 10 years of his life.

The Sagrada Familia has always been funded by donations, and toward the end of his life Gaudi was living like a homeless man, begging in the streets for money to go toward his church. In fact, when Gaudi was hit by a tram on his way to church in 1926 no one knew it was him, they thought it was a homeless man. As such he was sent to the hospital for the poor, where he died 3 days later. Gaudi is buried in the crypt of his cathedral, his most perfect resting place.

You should order tickets ahead of time, online. The basic entry ticket is €18, if you want to go up high it will cost you €29. There are also options for guided tours. You can see more about Sagrada Familia and order tickets here.