Are you looking for a fabulous day trip from Barcelona? Would you like to find a quaint little Catalan town to stay in for a few days or forever? I want to tell you about Girona, an exquisitely beautiful little walled city with a history that dates back to 79 B.C

Girona is incredibly lovely. Situated 99km northeast of Barcelona in the heart of Catalunya, Girona is the perfect place to escape to for a day trip, but also would make a gorgeous home-base for your entire Catalan vacation. While I was walking around soaking up the beauty of this darling town I kept thinking I would like to run away here for a couple of weeks, or even longer.

10 Things You Must Do In Girona 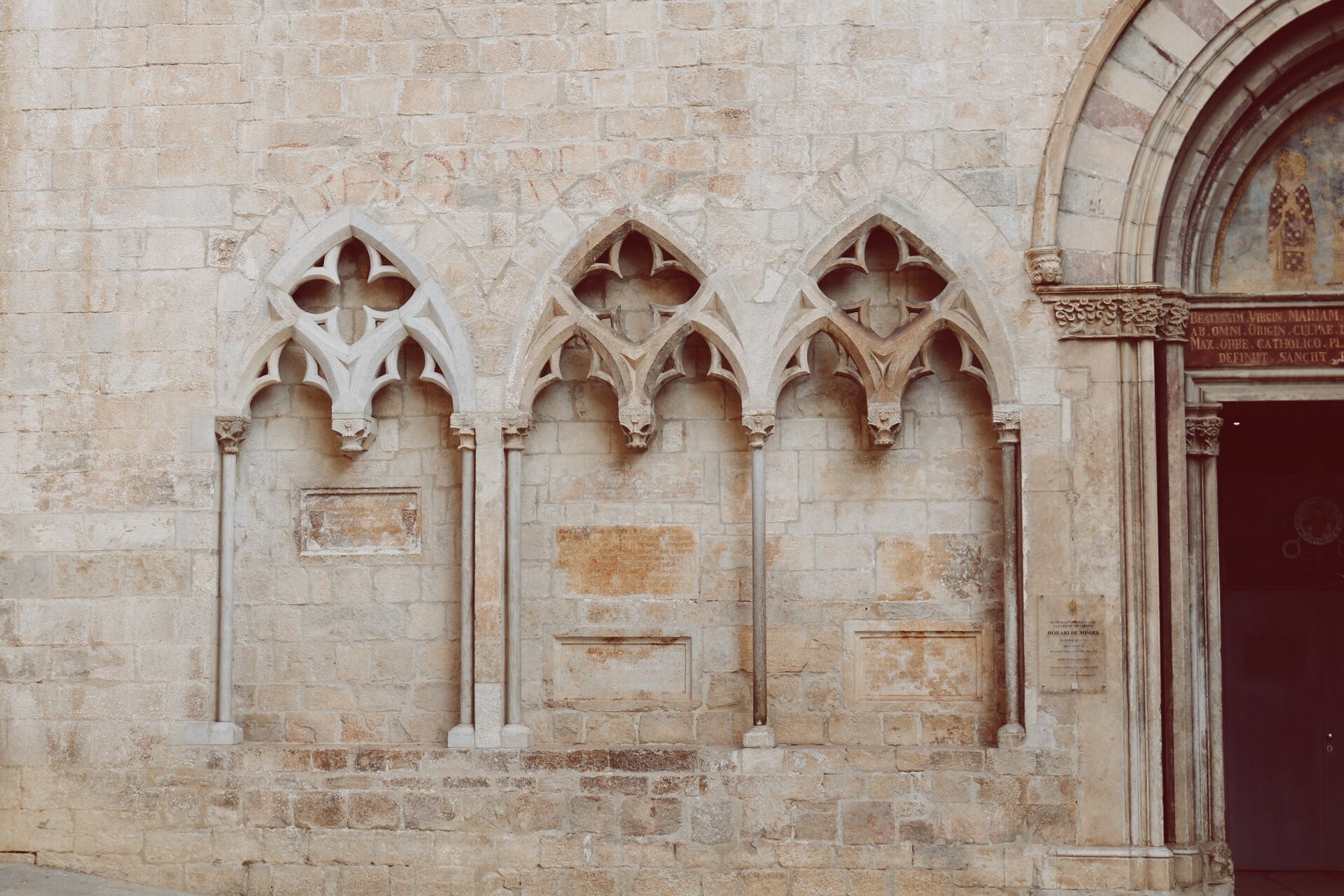 Apparently the guides even have iPads to show you clips from the show to help you identify the places you are seeing. I haven’t taken the tour but have been told that Viator runs them. 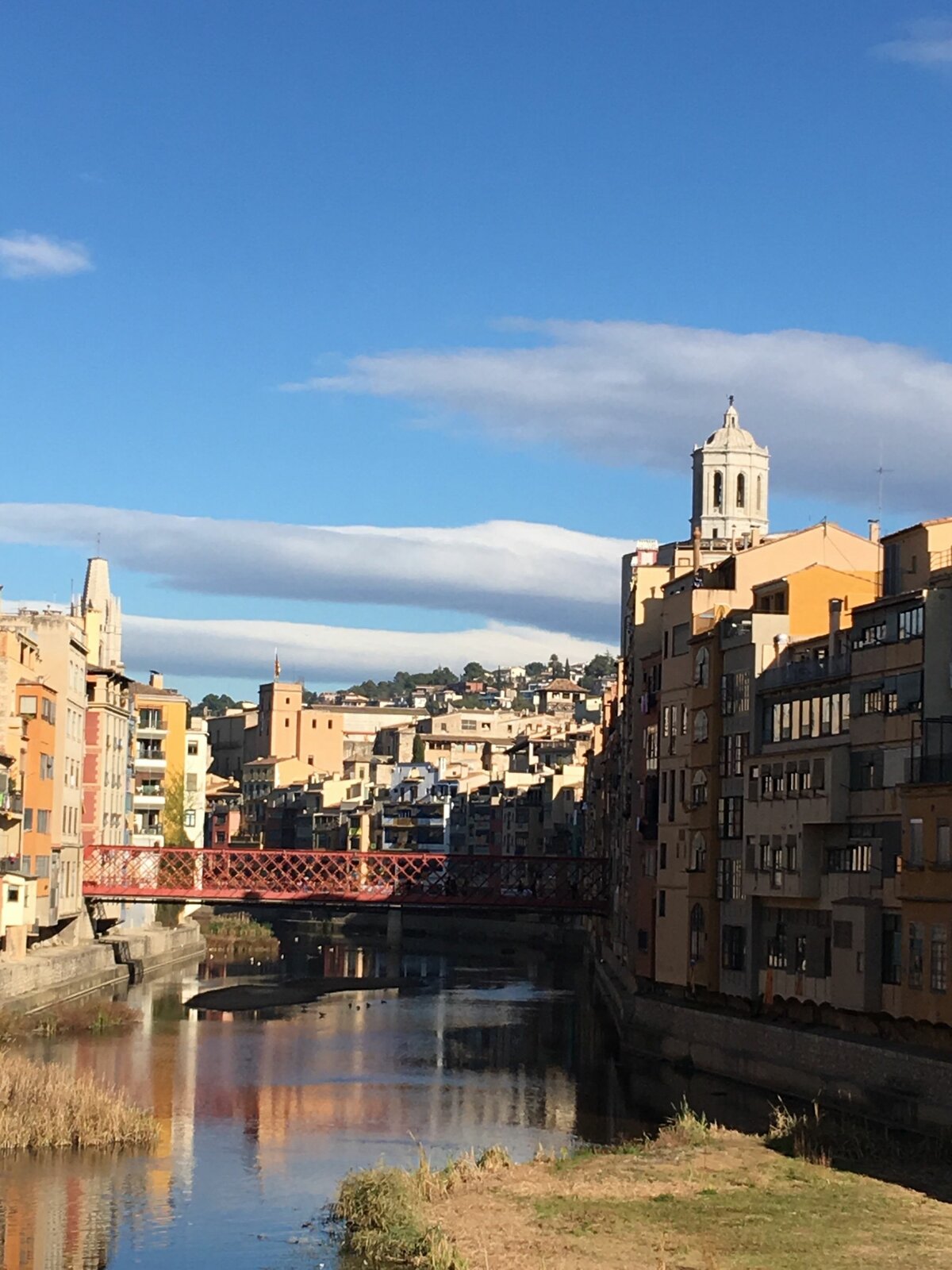 Two years before he built his famous tower Gustav Eiffel built a bridge in Girona. In December it was covered in yellow ribbons. 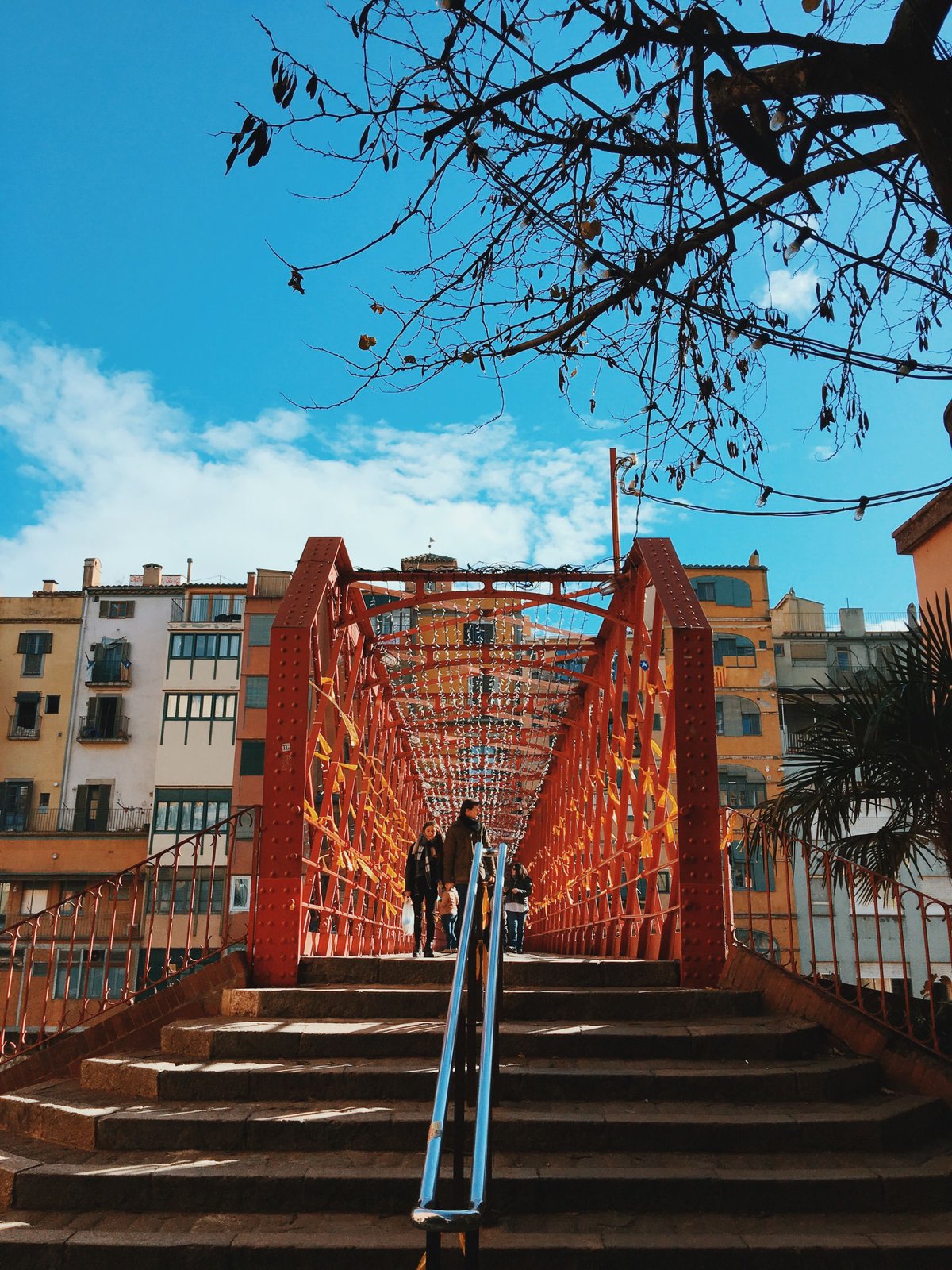 Just seeing the Eiffel Bridge juxtaposed against the prettily colored buildings across the Onyar river is a little surreal, but fittingly magnificent. 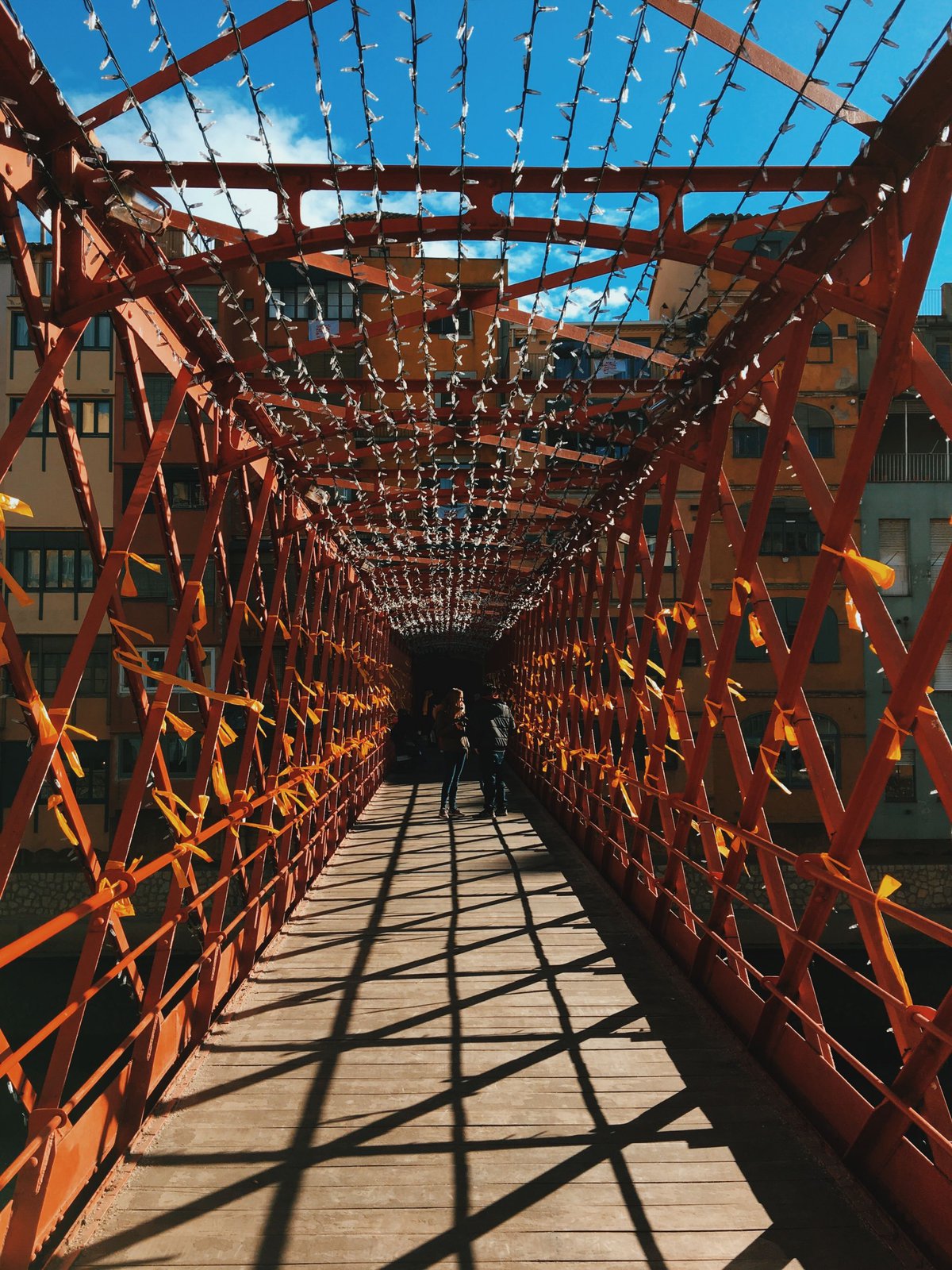 I couldn’t figure out why the cathedral seemed off kilter until I realized it only has one tower! The steps of the Girona cathedral are not only never ending, but also very popular. (If you want a good photo you need to get there first thing in the morning, otherwise you will have stair-climbers in your pictures.) 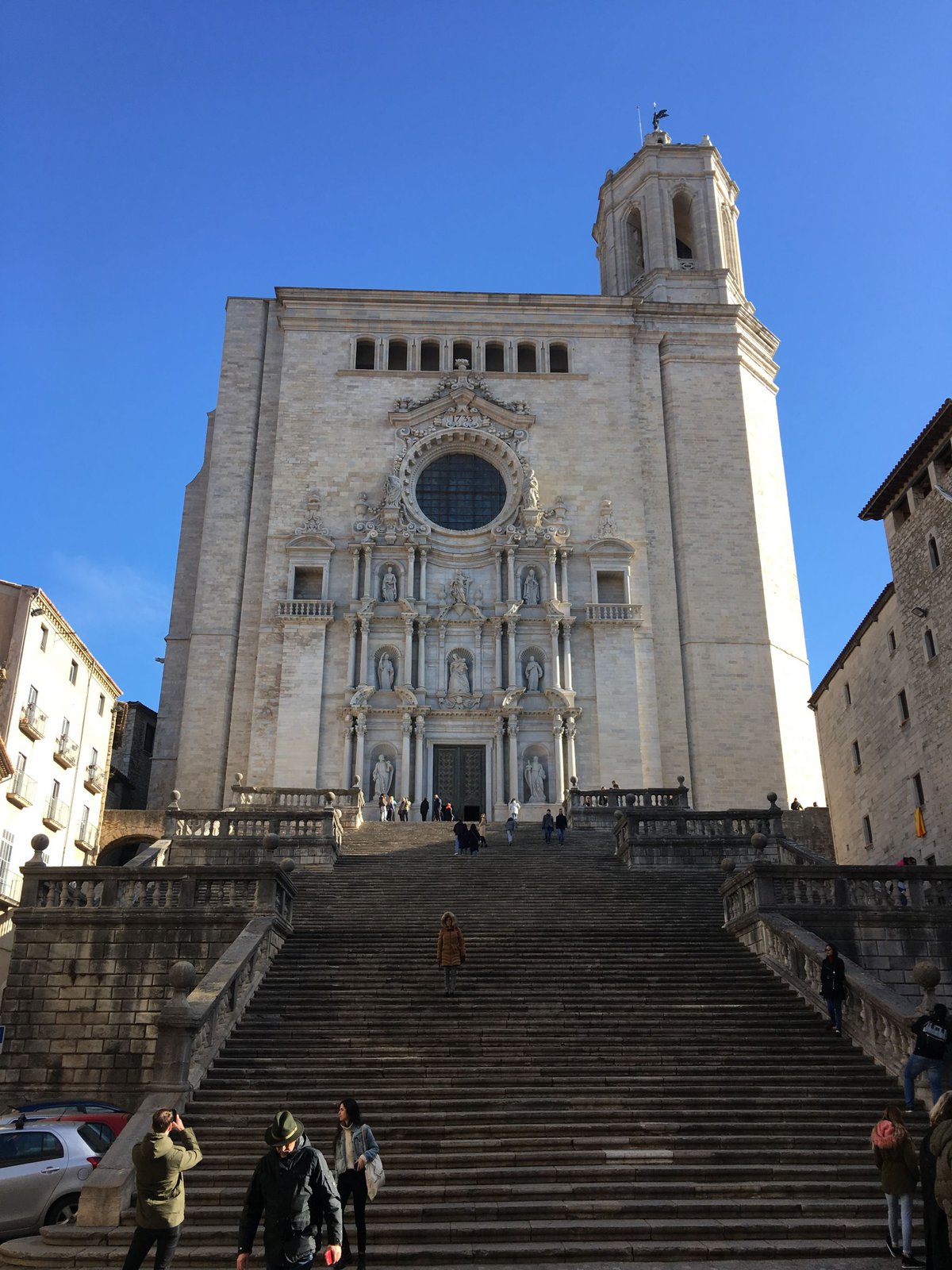 For those of you who enjoy burning quads and lungs and do make it up to the top, see if you can spot the witch. Legend has it that a witch used to hide up there and throw stones. As punishment she was turned into a gargoyle and now spits rainwater instead of curses. Look for her amongst the gargoyles – she really is up there!

RELATED POST: 10 THINGS YOU ABSOLUTELY MUST DO IN BARCELONA

I was so disappointed that by the time I actually found the Arab Baths they had closed for the day. I was there in December when they closed at 2 pm. Built in the 12th century in the Romanesque style with Saracen accents, the baths were in use until the end of the 14th century, and then were restored in the 20th century. Famous for their beauty and for the play of light and dark these baths are a must see on your trip to Girona. Just don’t be like me and miss them – go early! 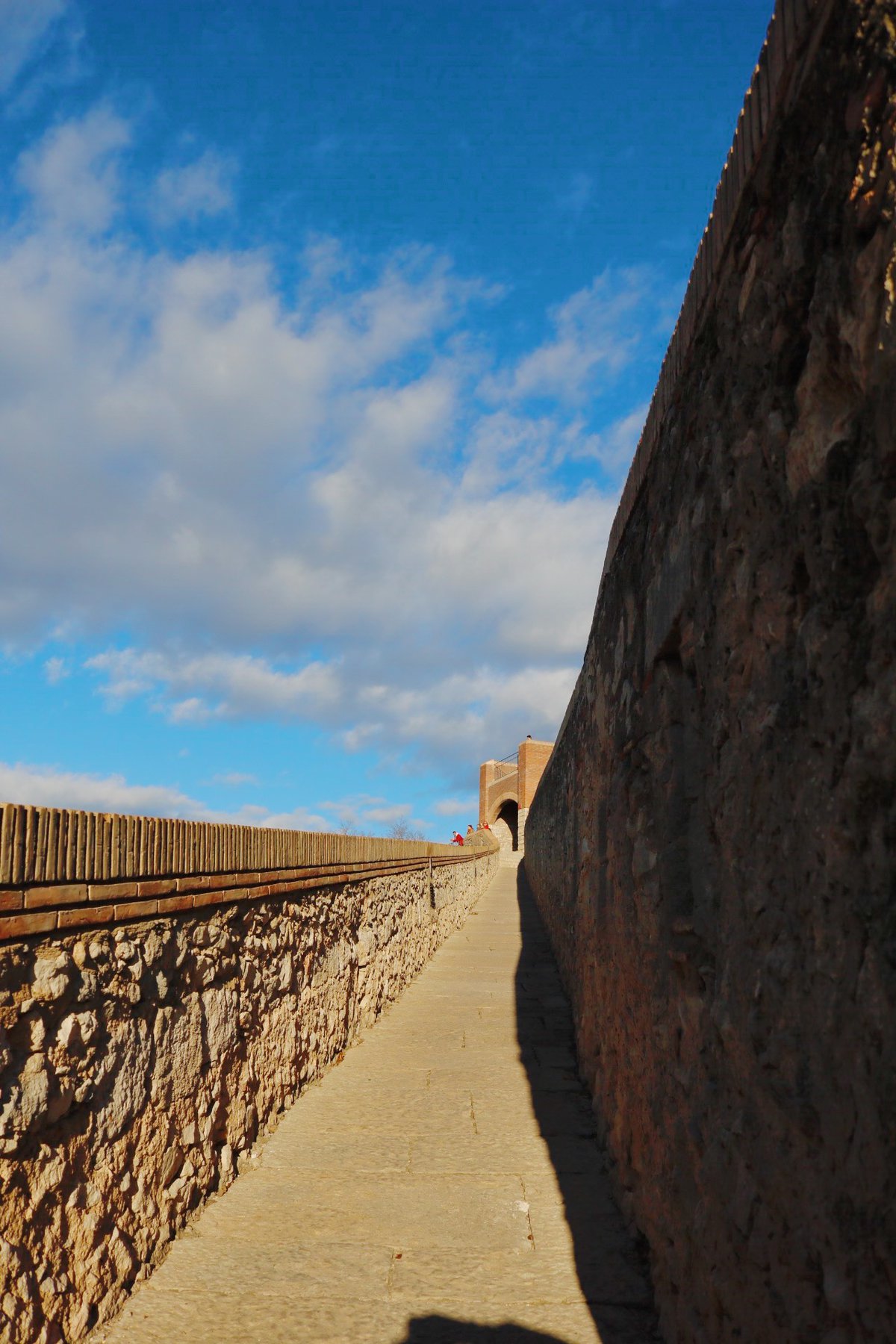 The Passieg de la Muralla, or the walkway that spans the length of the wall on the eastern border of the old town of Girona give you the advantage of being up high to take in the sweeping views of this beautiful city. The walls don’t circle the city anymore, but you can still have an extended walk. I was advised to go up in the late afternoon after the sun has peaked and is beginning to soften. It made for really beautiful views but not such great photos for an entirely novice photographer. It was however one of my favorite activities while I was there! 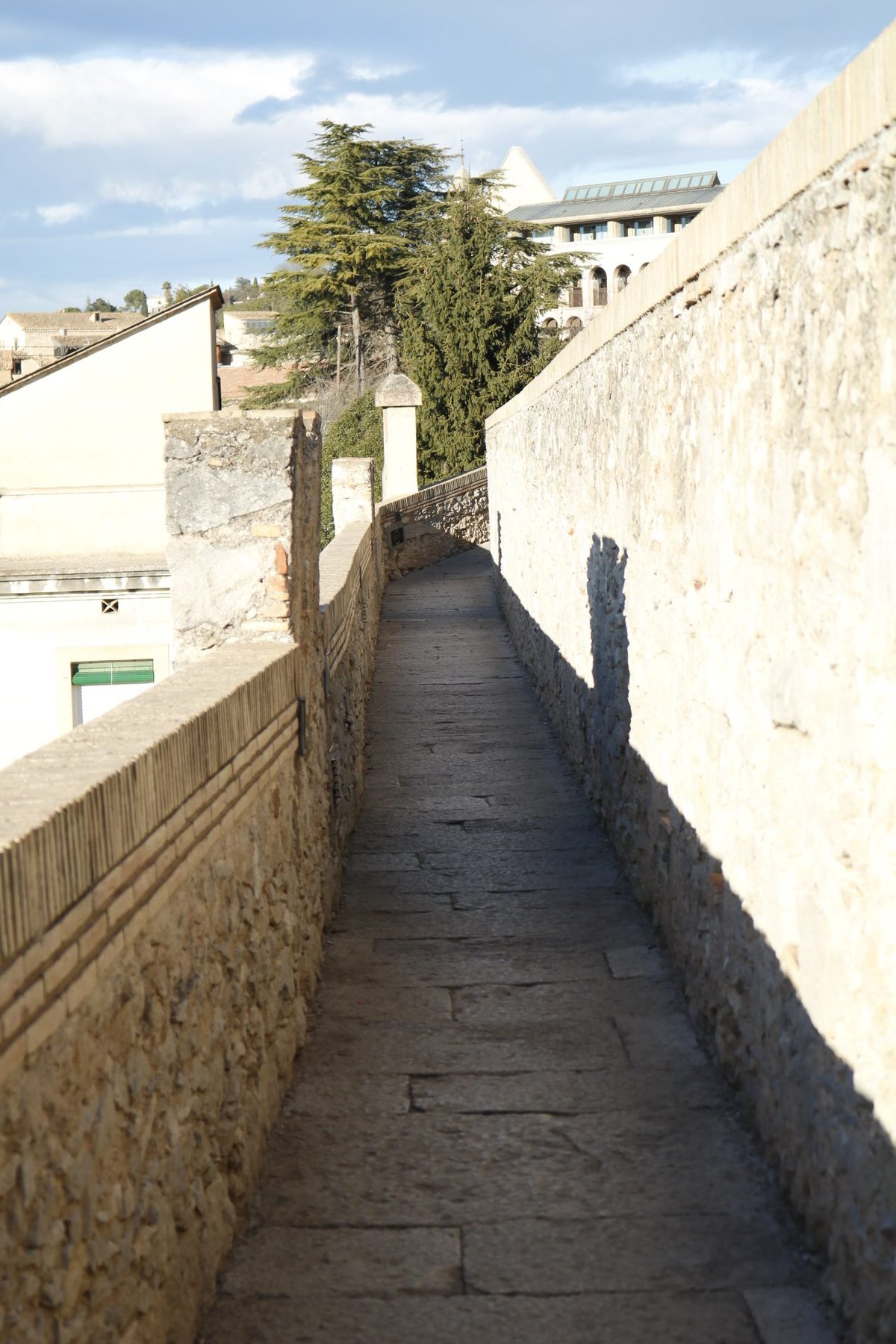 Of course I got lost and went up from the direction they advise you to go down, but we spent a good hour just exploring the ramparts and soaking up the history before eventually getting to the wall. Along the way we met other people who were equally lost, so I did feel somewhat vindicated! 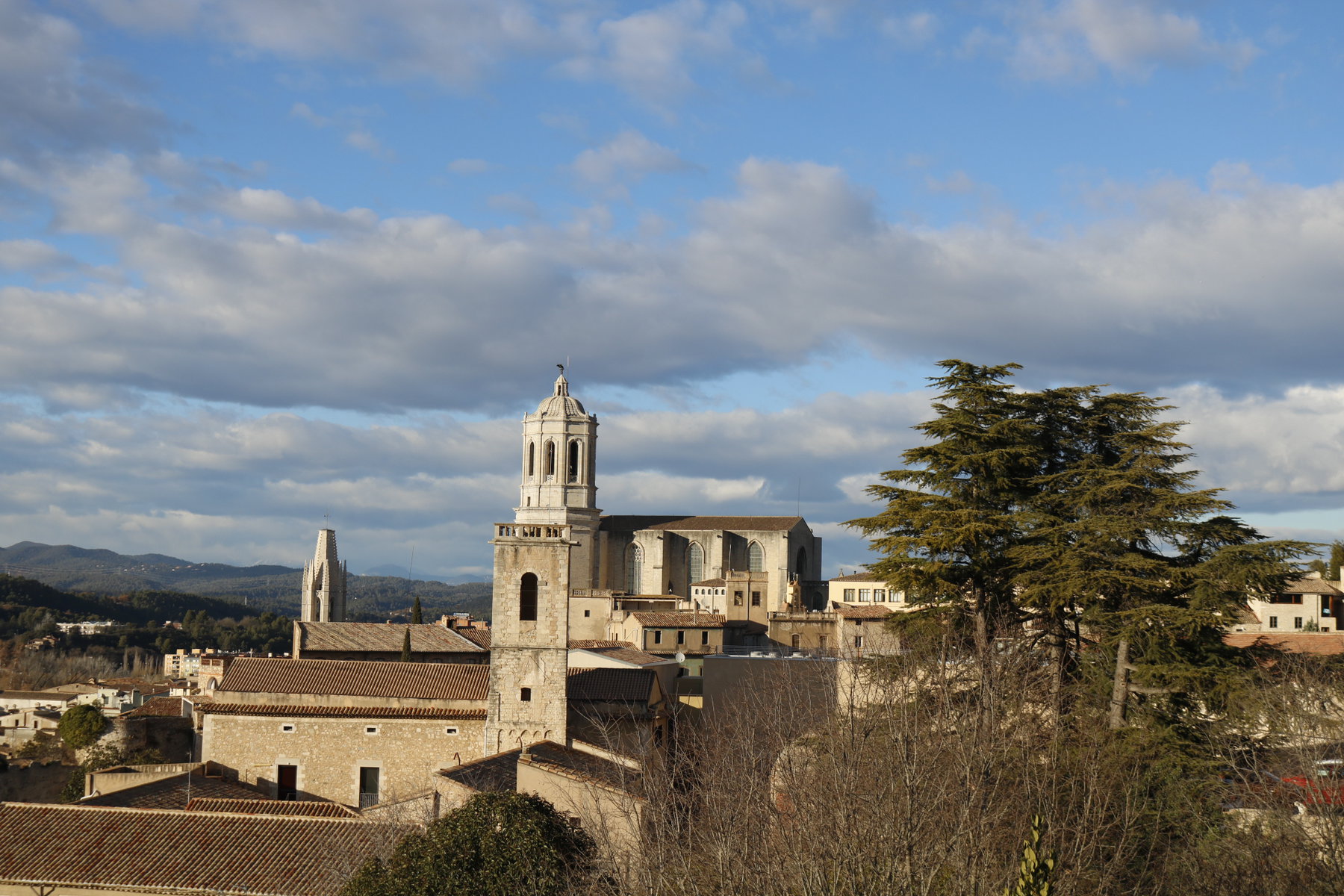 View of Girona from the Passeig de la Muralla 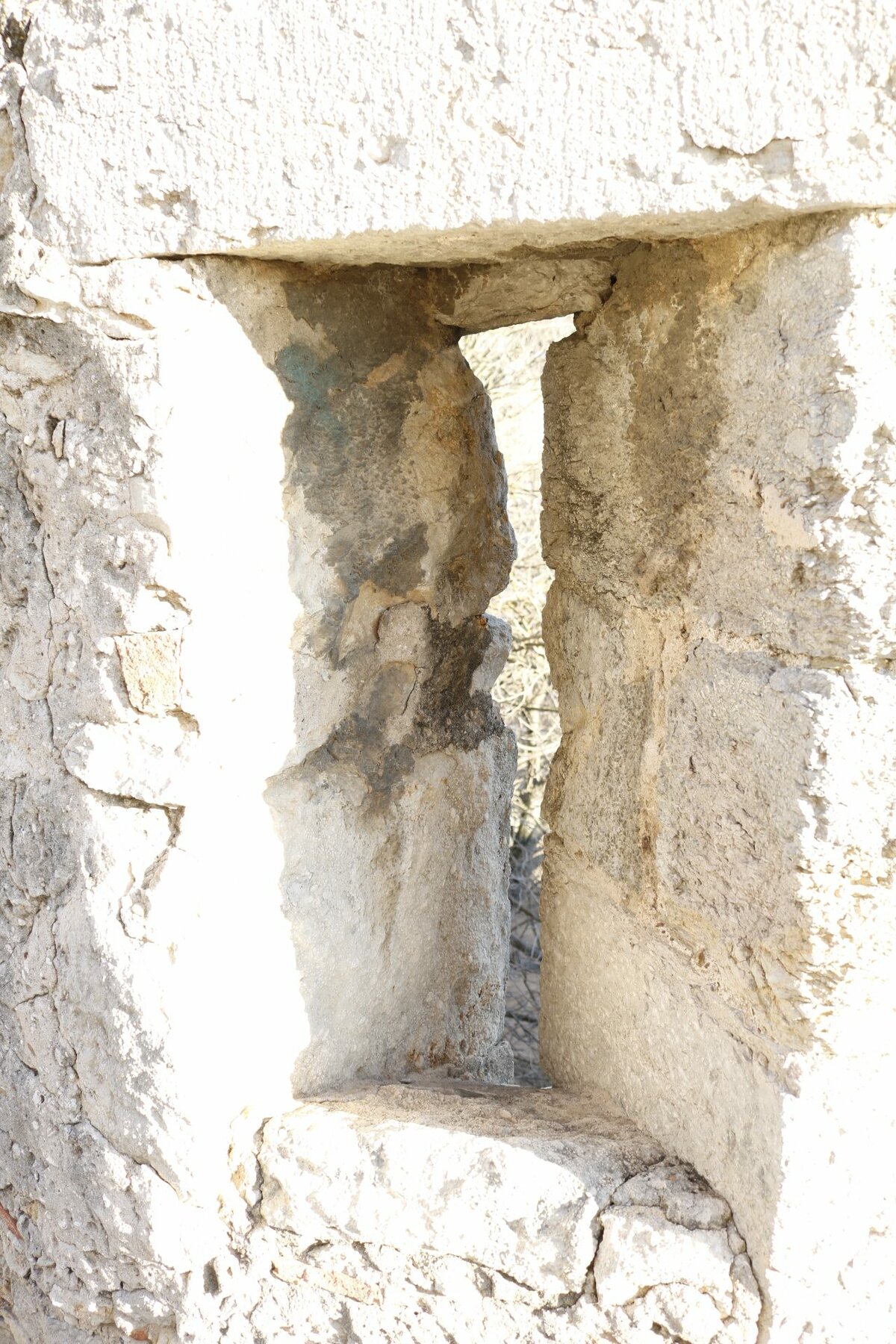 I wonder how many arrows were fired through here by soldiers up on the wall, protecting Girona? 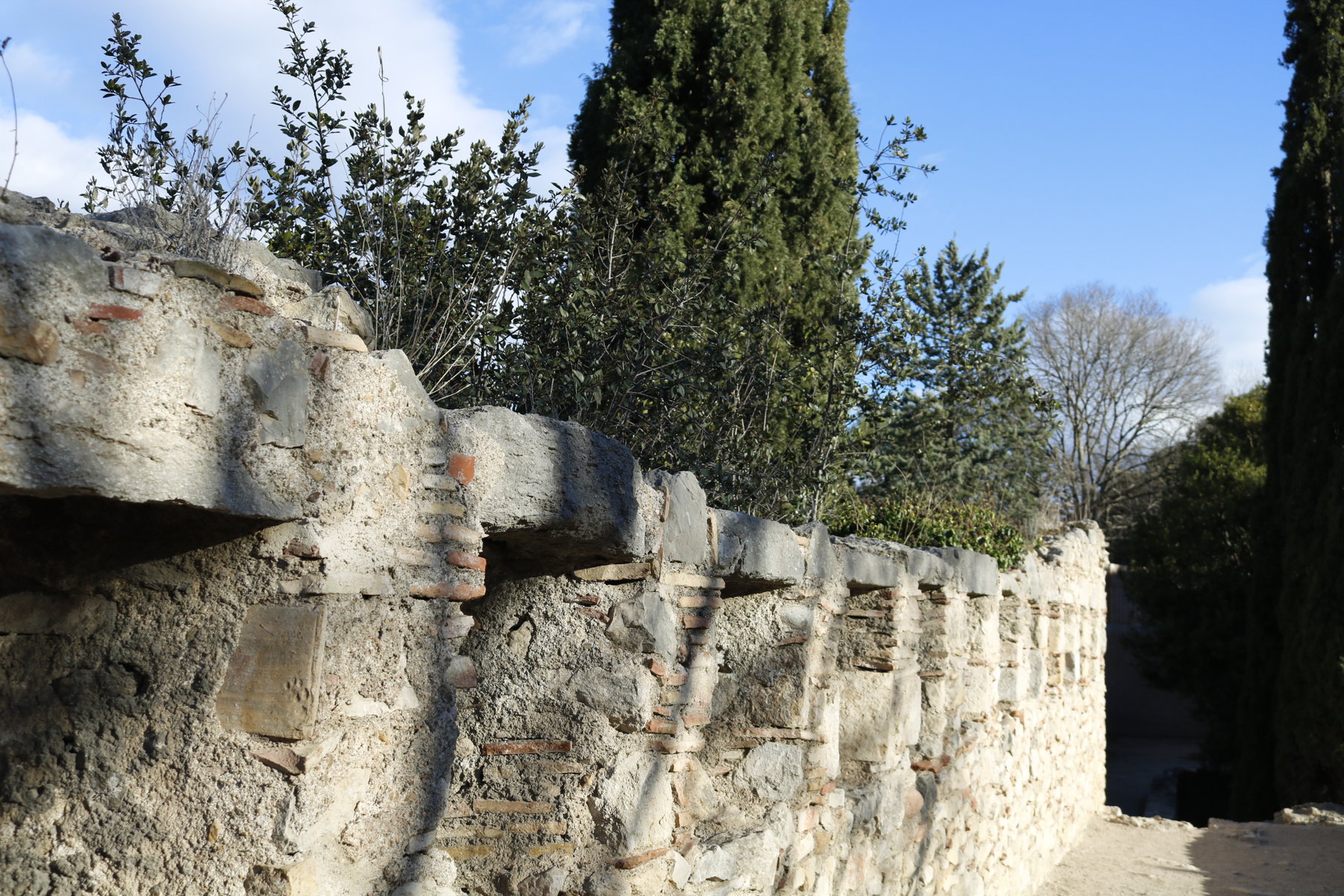 However you get there and whichever end you start at, go walk the medieval wall. 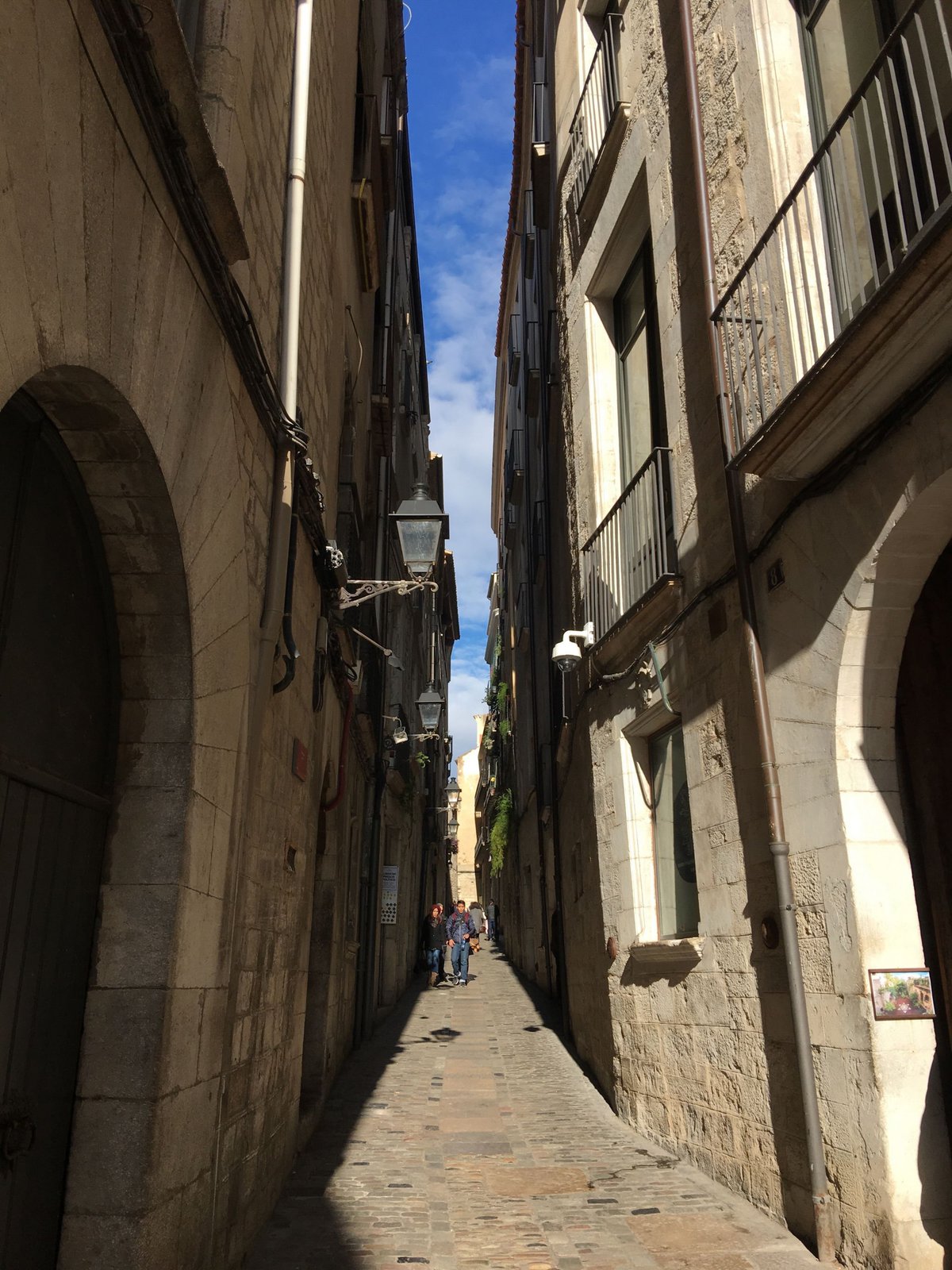 The Jewish Quarter, known as El Call, is one of the best preserved in Europe. In the 12th century Girona was home to one of the most important Kabbalistic schools in all of Europe. The Jewish community flourished here from the late 10th century until 1492 when the Catholic Church outlawed Judaism, forcing everyone to either convert or go into exile.

More than 500 years later the maze-like winding alleyways and cobblestoned lanes of El Call are still intact, and wonderful to explore.

RELATED POST: WHY YOU SHOULD VISIT LA BOCQUERIA MARKET IN BARCELONA

7. Look Along The Onyar 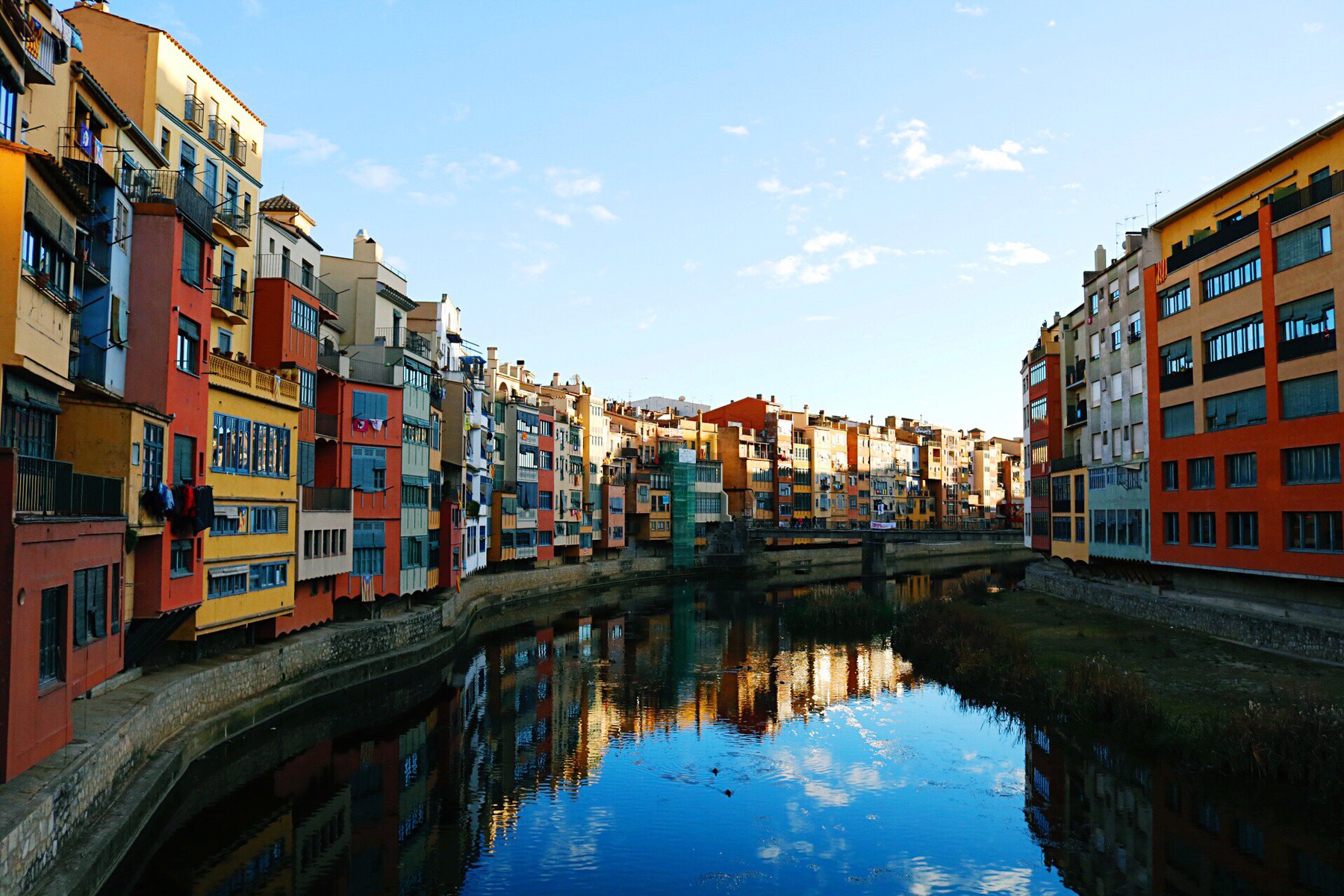 From any of the many bridges crossing the Onyar the views are just so incredibly pretty. At first glance it reminds me of Florence, but once that semblance passes, this view is the heart of Girona. 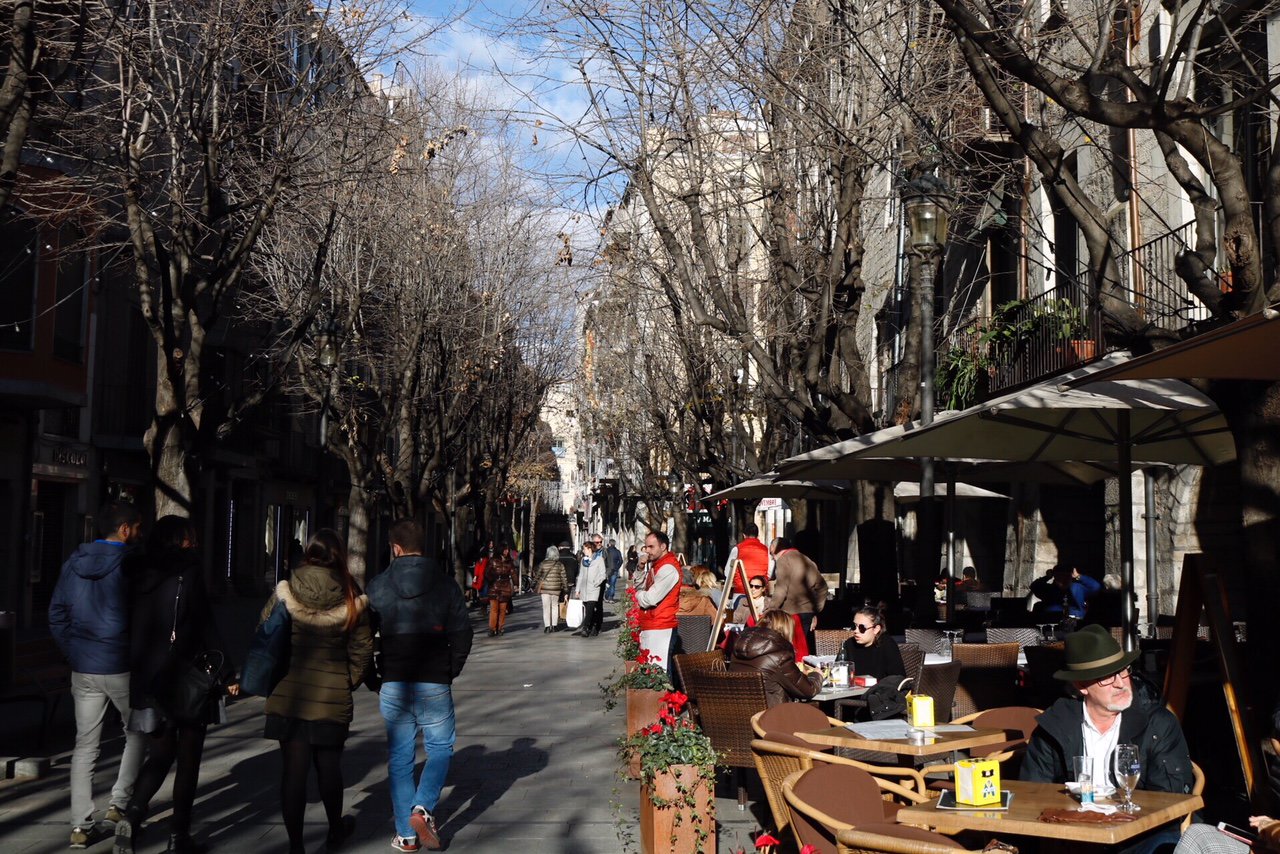 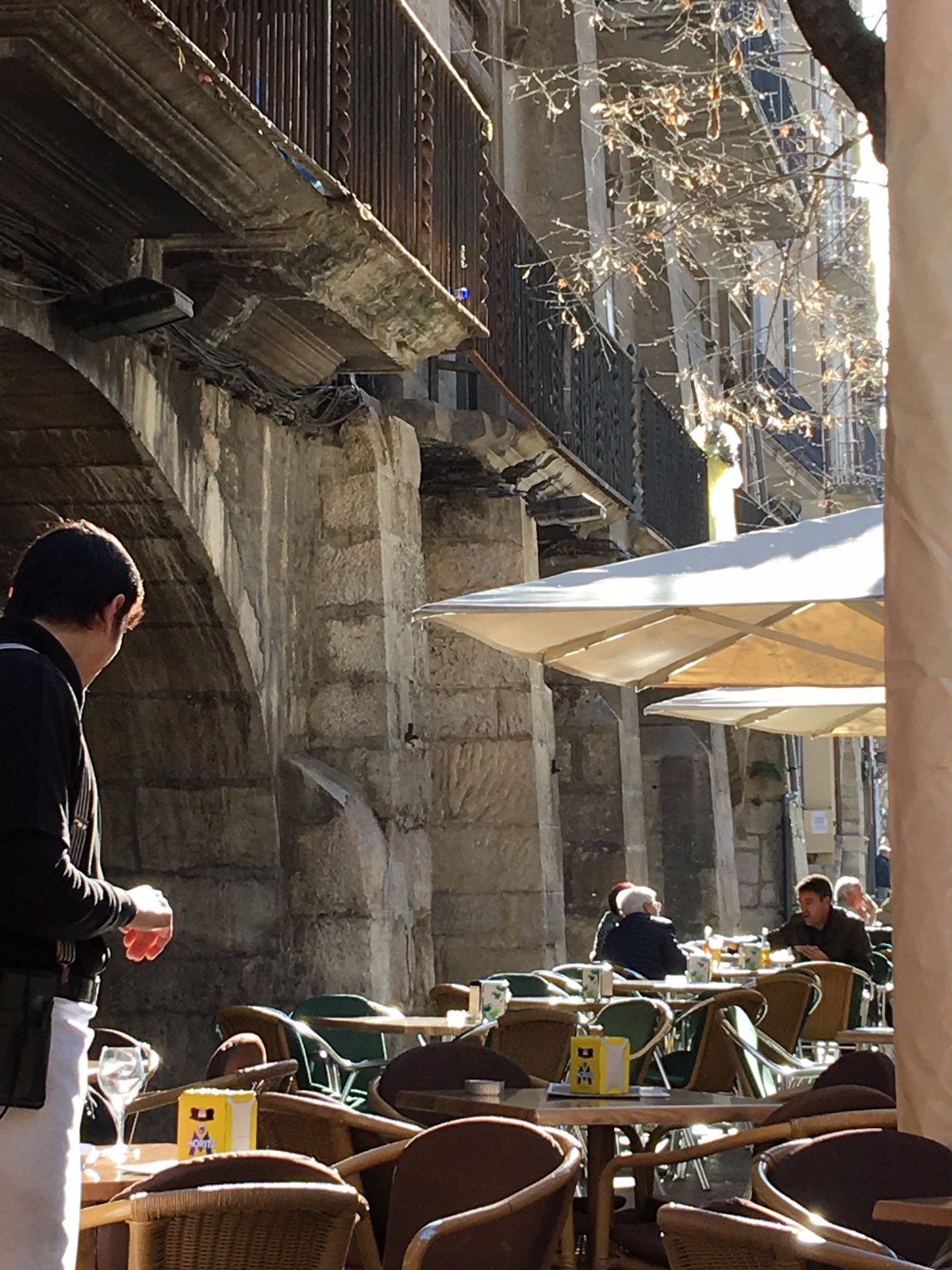 It may have been that it was low tourist season, but everywhere we looked it was mostly locals at all the restaurants, which is always a good sign! All were enjoying a long, slow, Catalan lunch, so we did the same. 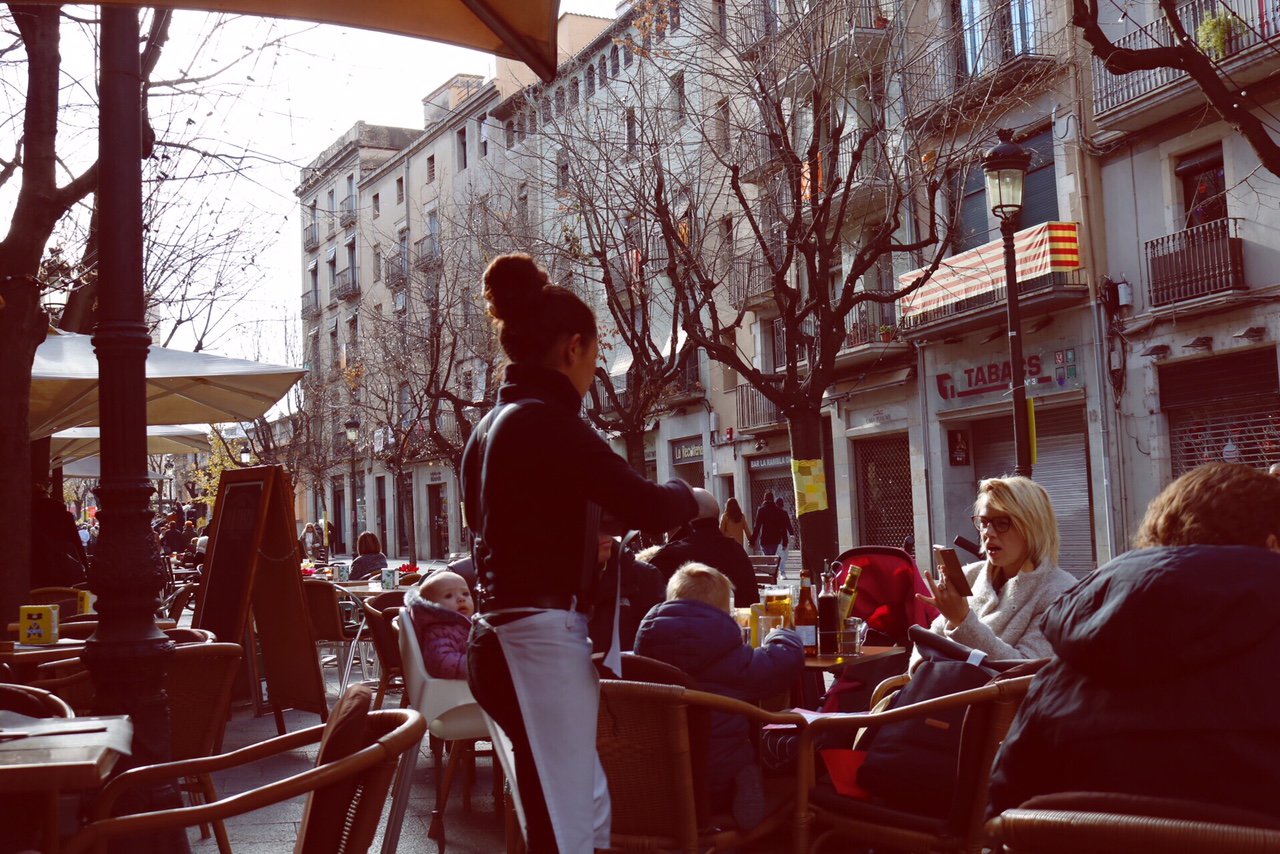 We were there on my birthday, so in it’s own way it was extra special. To me anyway. 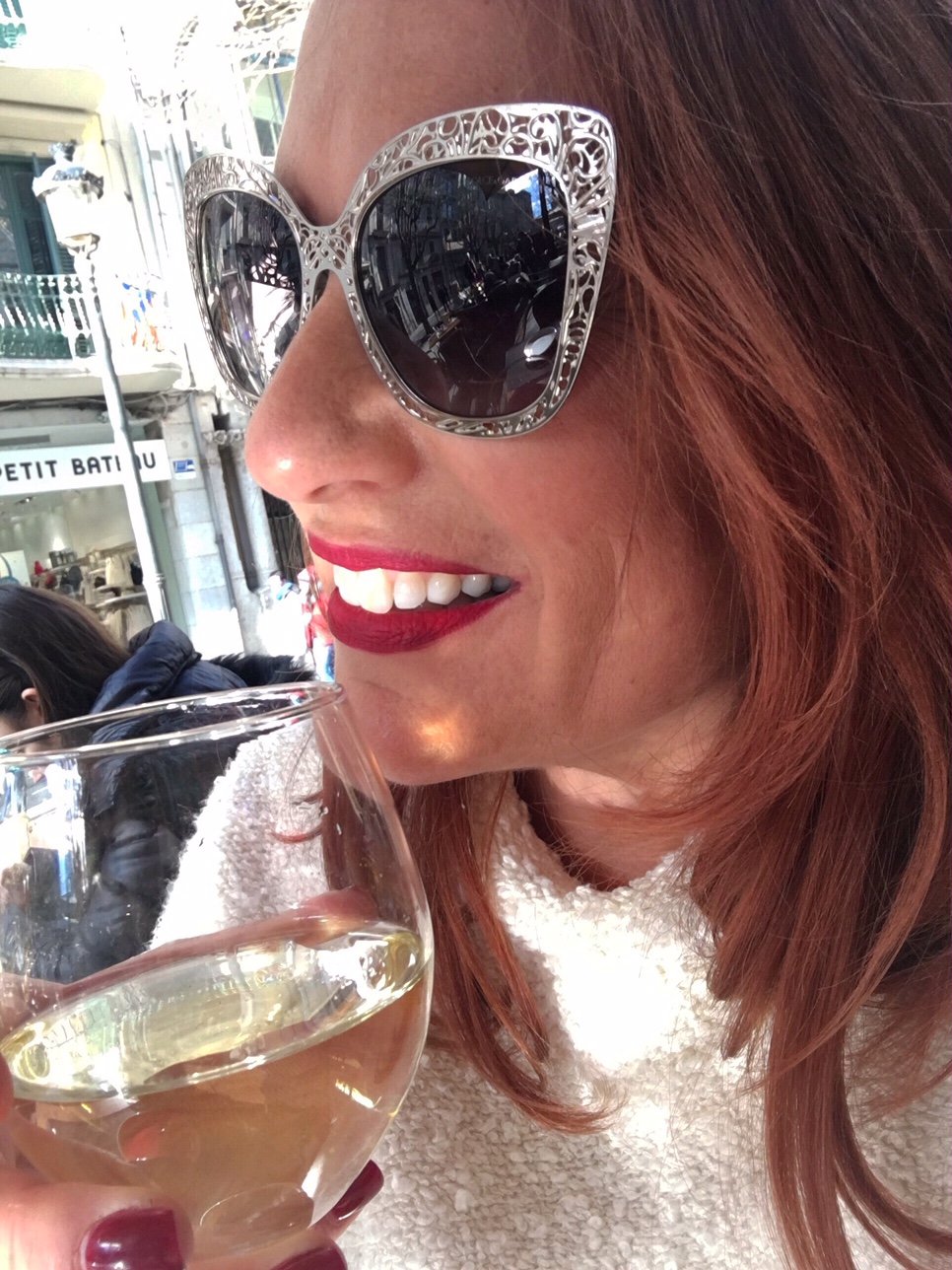 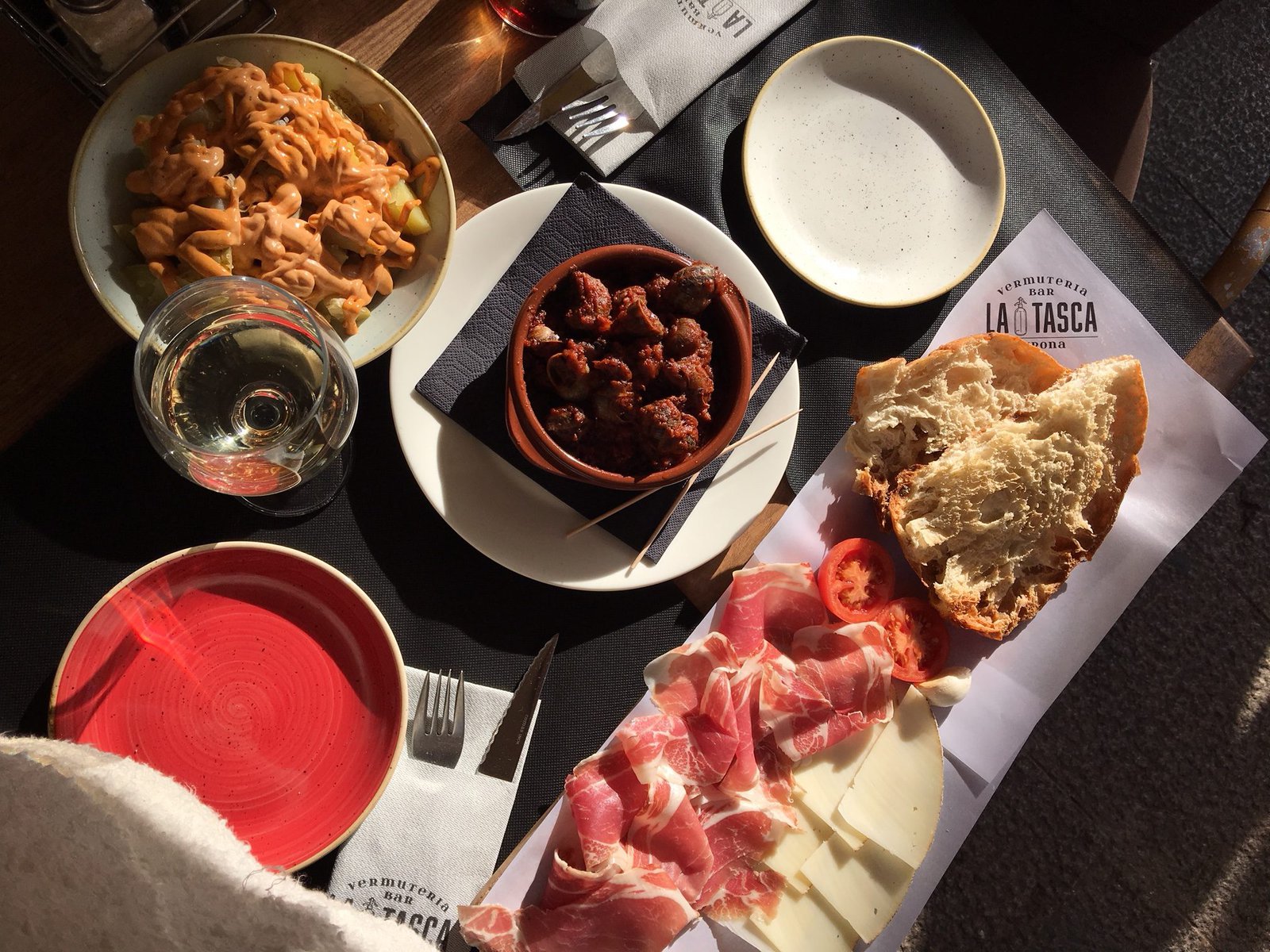 We had Iberian ham and cheeses, local bread from the bakery across the street, Catalan escargots and a spicy bowl of patates bravas, along with a really incredible local wine and some coffee. 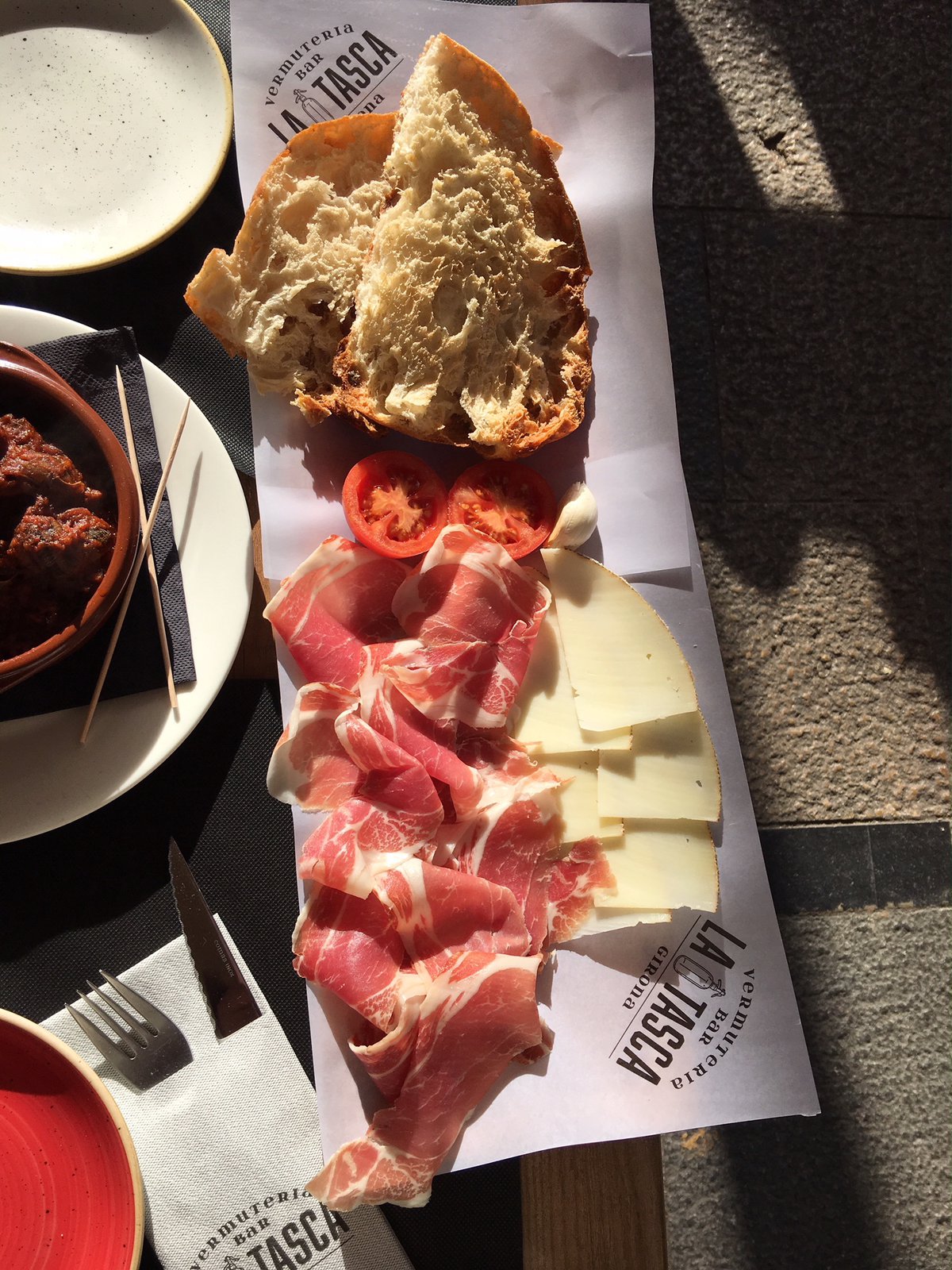 It was a Sunday afternoon and a local band was playing Catalan folk music at the far end of La Rambla with the town’s old folks all dancing. It actually felt as though we were extras in a movie. Definitely block off time to enjoy a long lunch in Girona!

Much like rubbing the Cinghiale’s nose guarantees you will come back to Florence, Girona has its own statue that promises you a return trip. This time instead of a nose rub you need to do some butt kissing. 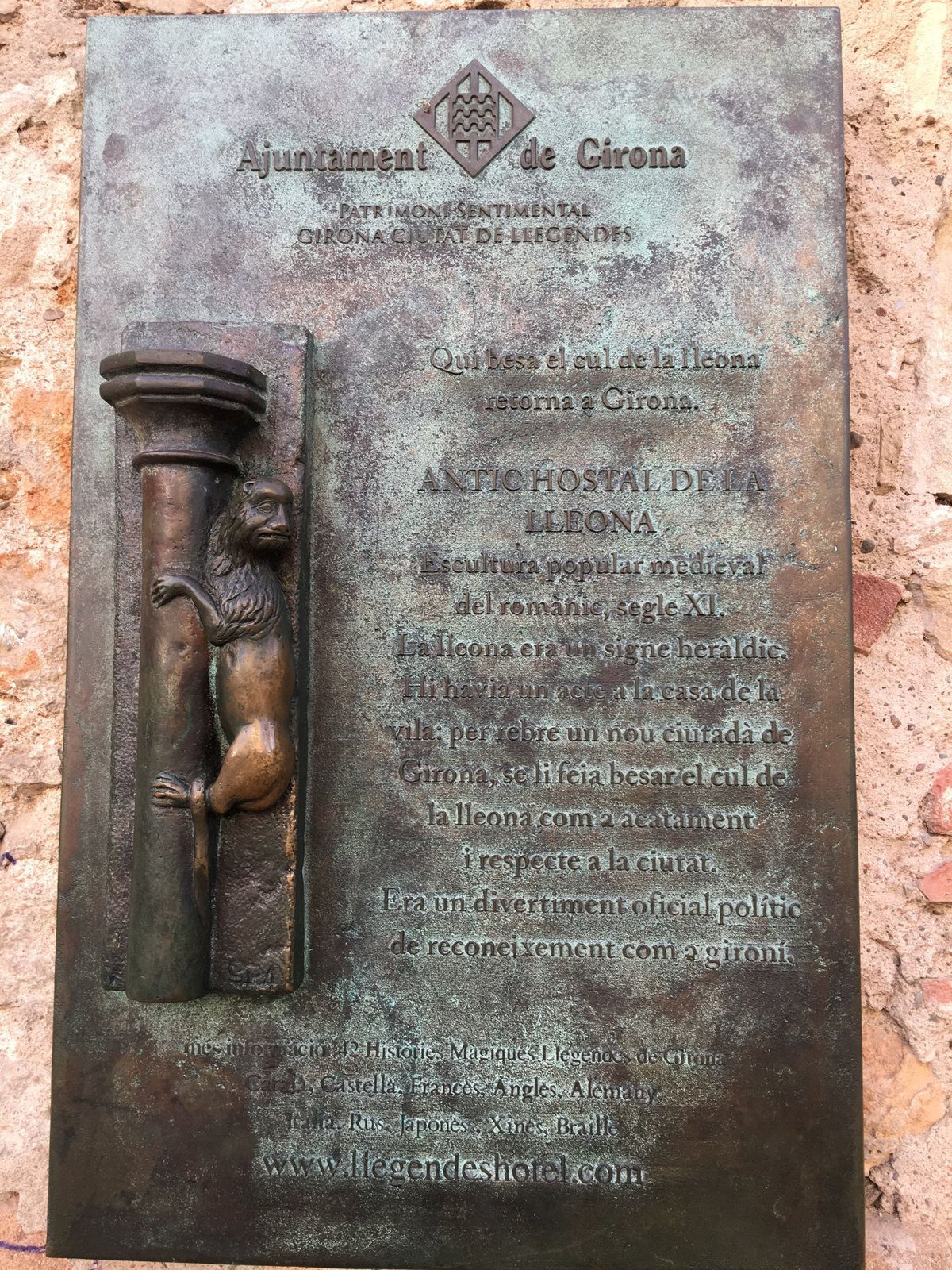 “Whoever kisses the ass of the lion will return to Girona” 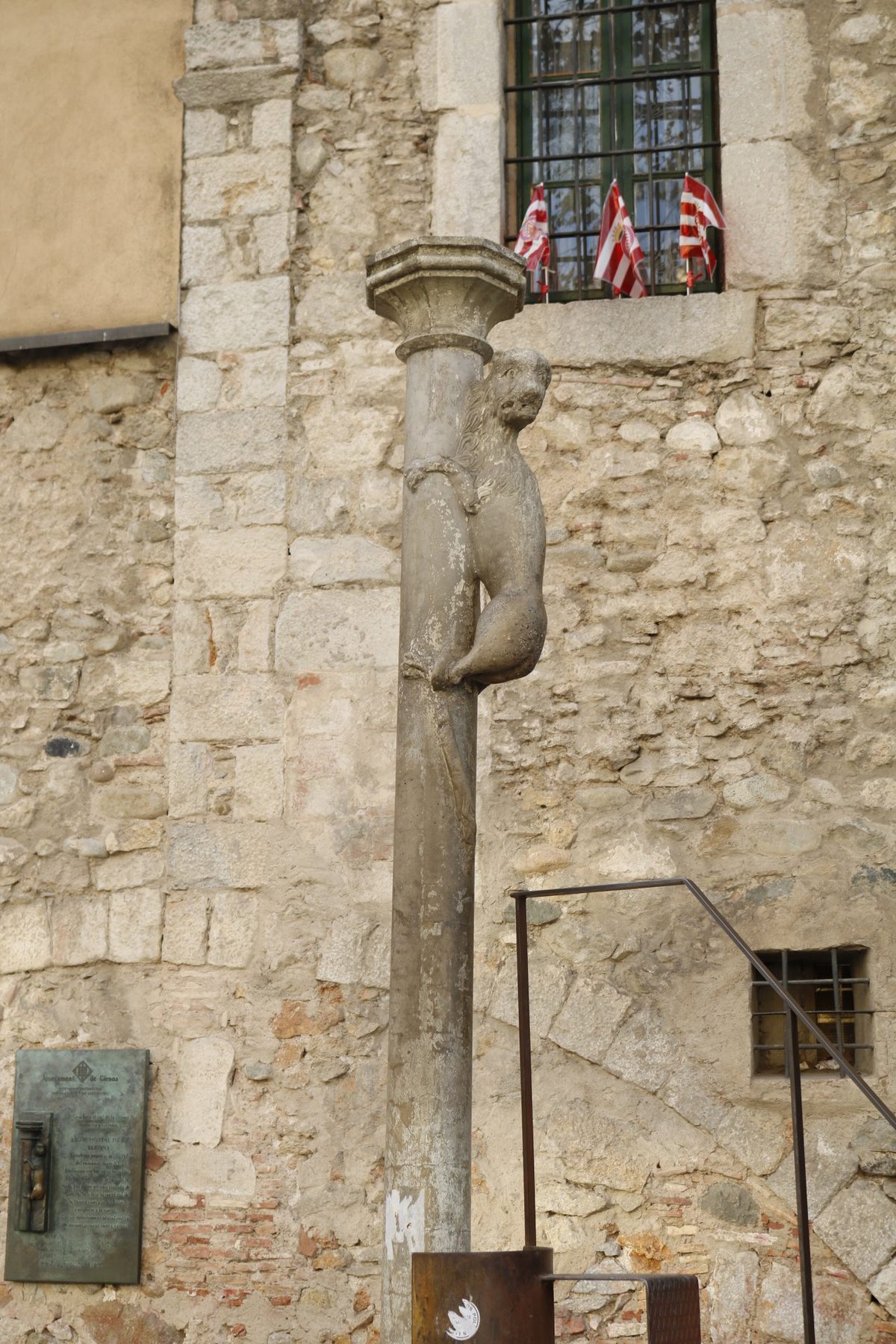 First you have to find the statue of the lioness in the Placa de Sant Feliu. It could be argued that she is scampering up the pole to get away from tourist lips, but legend has it that if you climb the specially placed steps and plant a big smooch on her derriere you are guaranteed to come back to Girona. 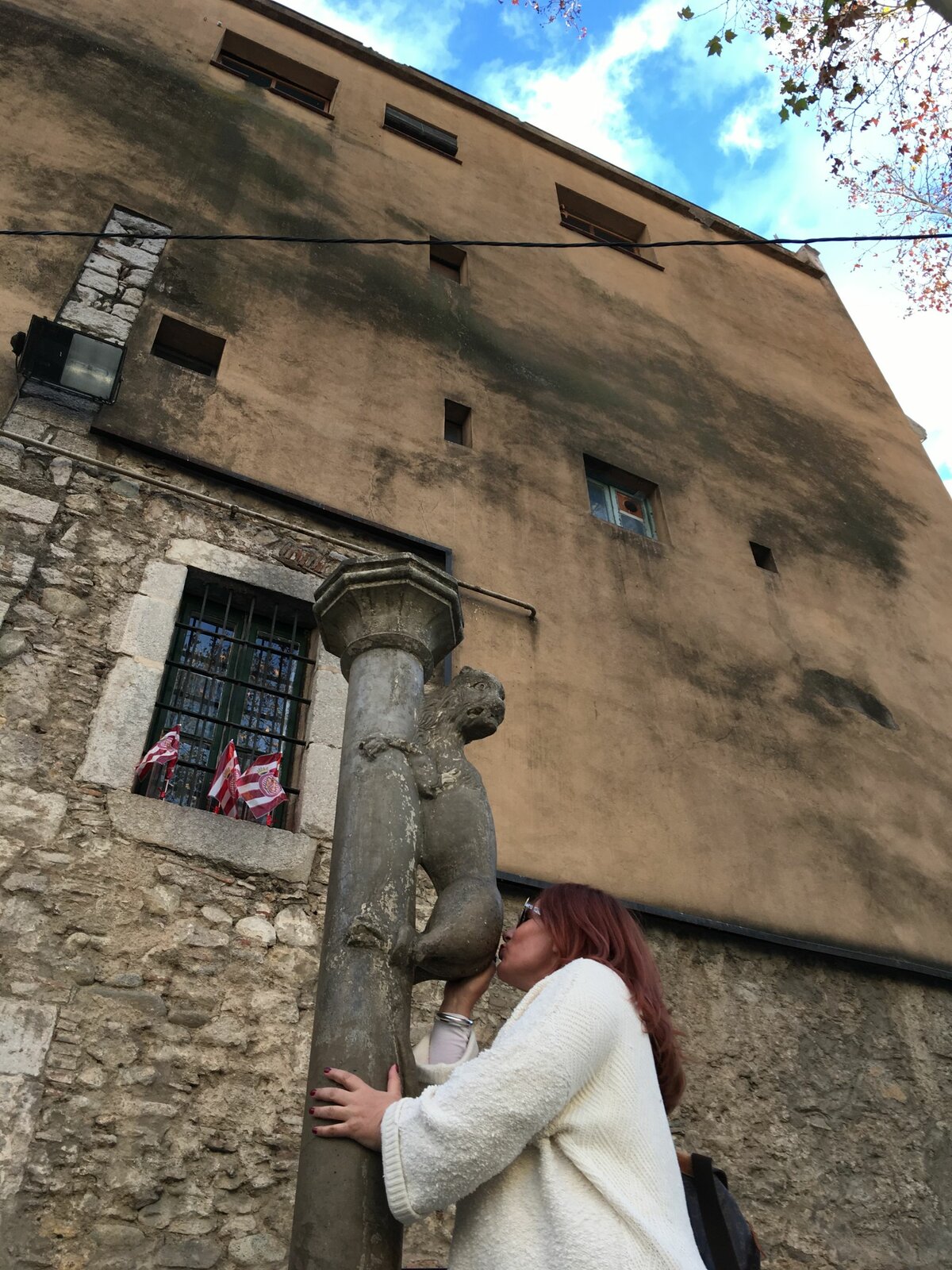 This town is so completely lovely I just had to kiss the lion’s bum!

The original Romanesque pole and lion were erected in the 12th century. As time passed and legend was created the lion became a lioness. The original statue is in Girona’s Museum of Art, the current statue being erected in 1986.

My original plan had been to stay at least one night in Girona, but I had to cut the trip short, so ended up just making a day trip. In my overnight plan I was going to end the day in Plaça Indepencia, sipping cava as the sun went down, and maybe starting the next day back there for coffee. 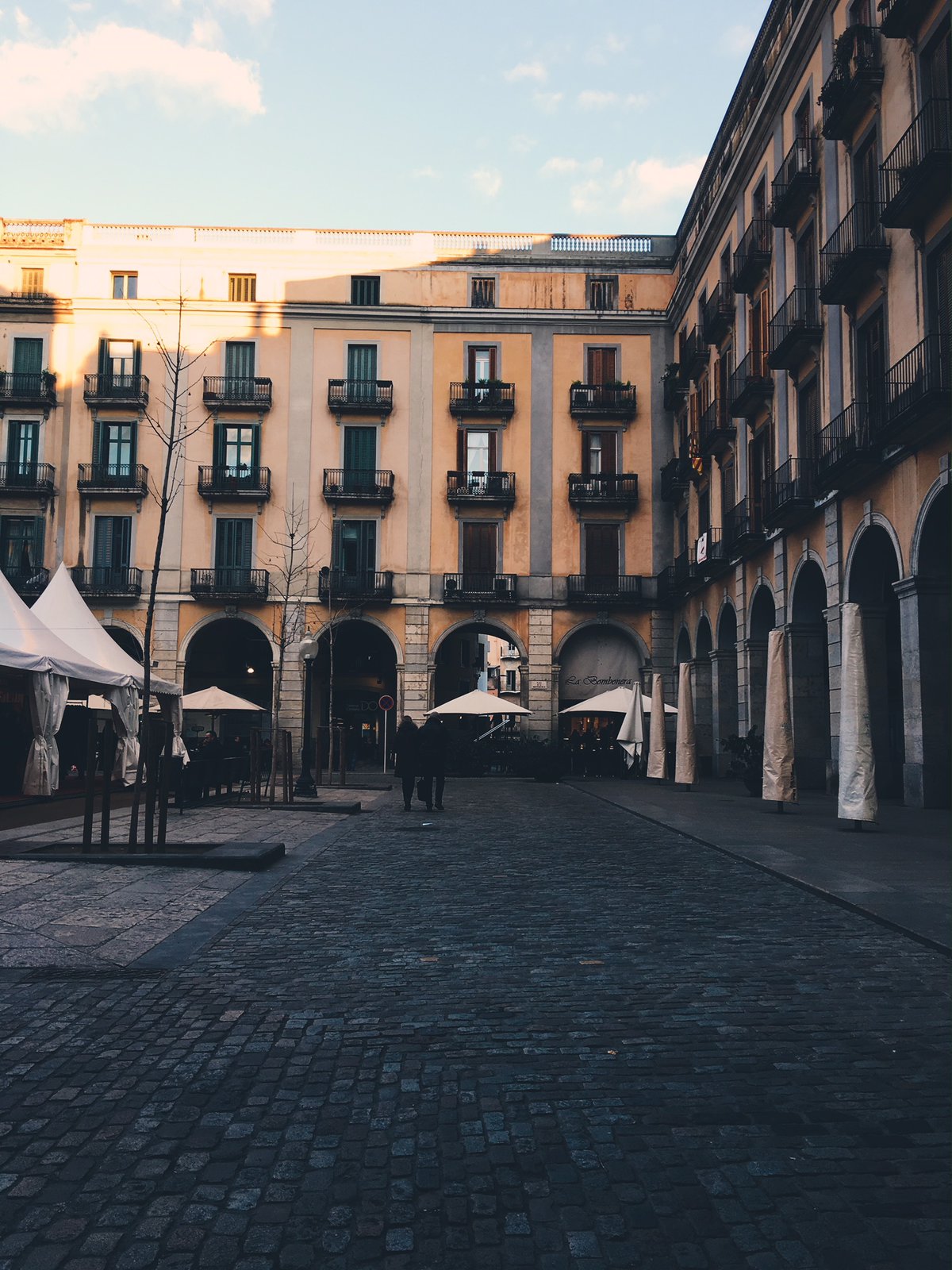 This plaça is so pretty with a slightly shabby old world charm. We did manage to end the day in Girona sitting at an outdoor café (next to a heat lamp – it was freezing out!) with a crisp, bubbly glass of local cava. It was one of those glorious travel experiences that becomes a defining travel memory. The view was so lovely, the atmosphere was perfect. 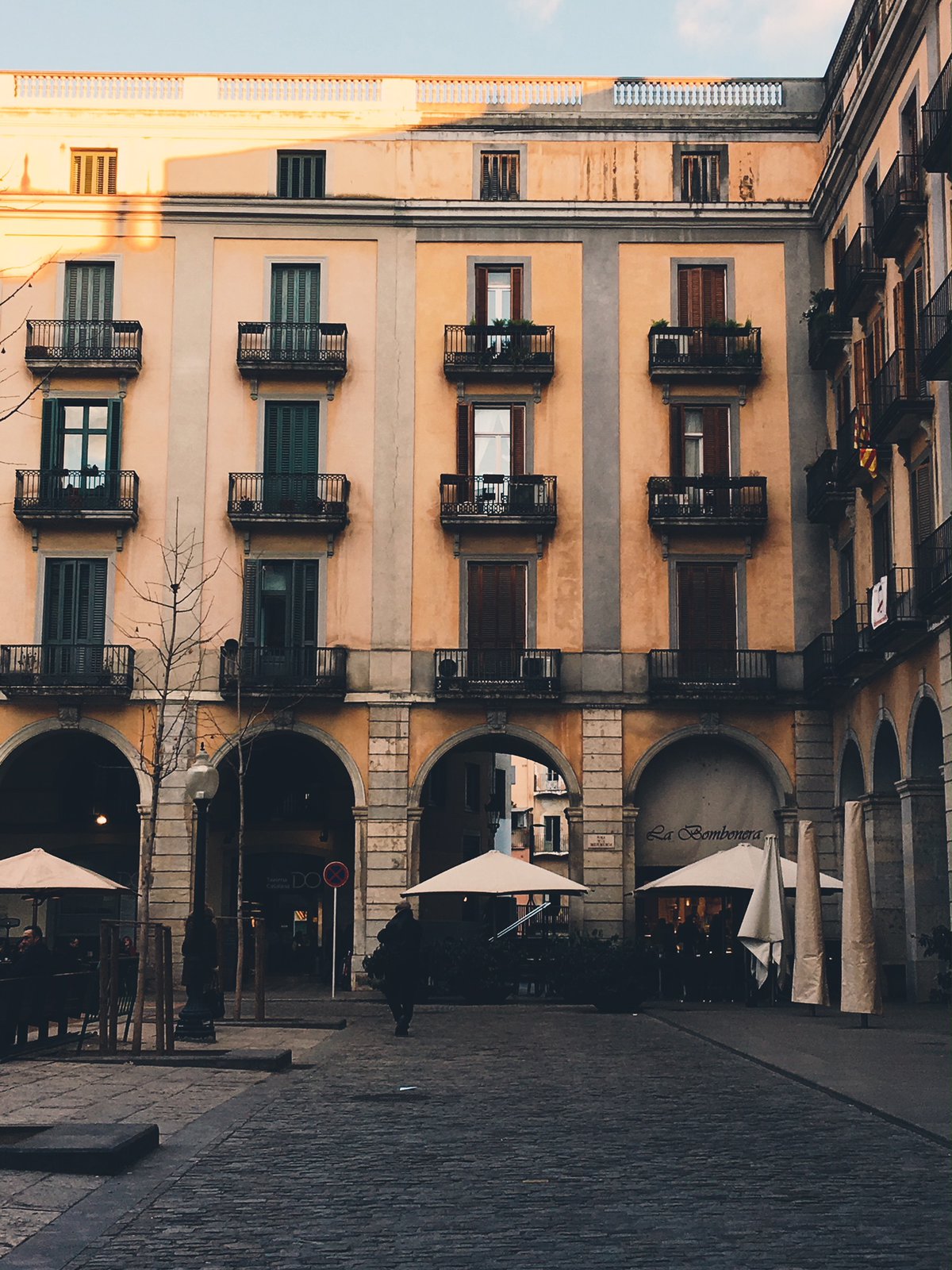 It was December so the center of the Plaça was full of Christmas market stalls and local families wandering and stopping for a late afternoon coffee or glass of wine. 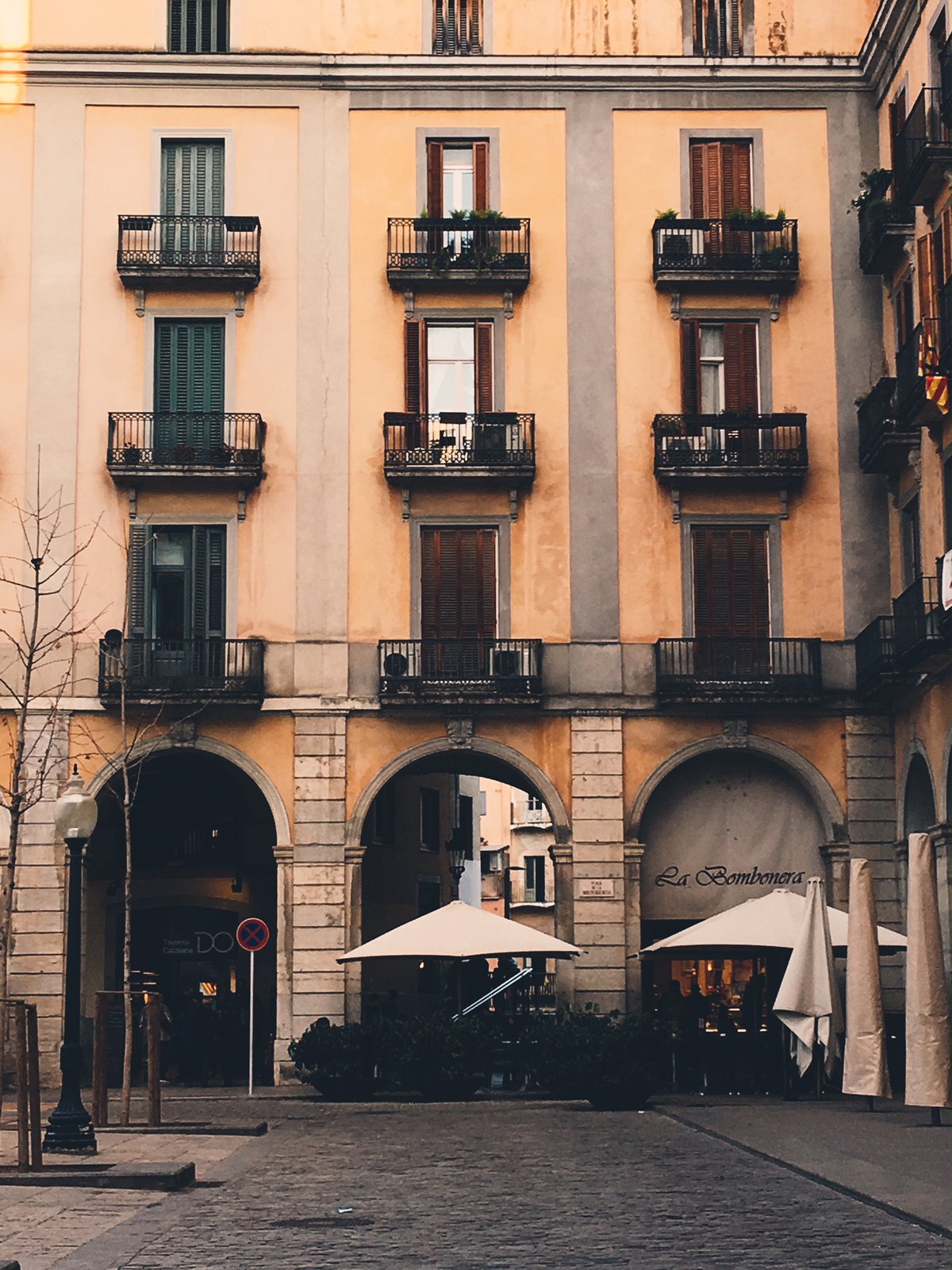 I really hope that you will take the time to visit Girona, if not for a few days then at least for a day trip from Barcelona.

You can get to Girona by train from the Barcelona Sants station. The regular train takes 54 minutes and the fast train takes 38 minutes. There are 24 trains per day from Barcelona to Girona.