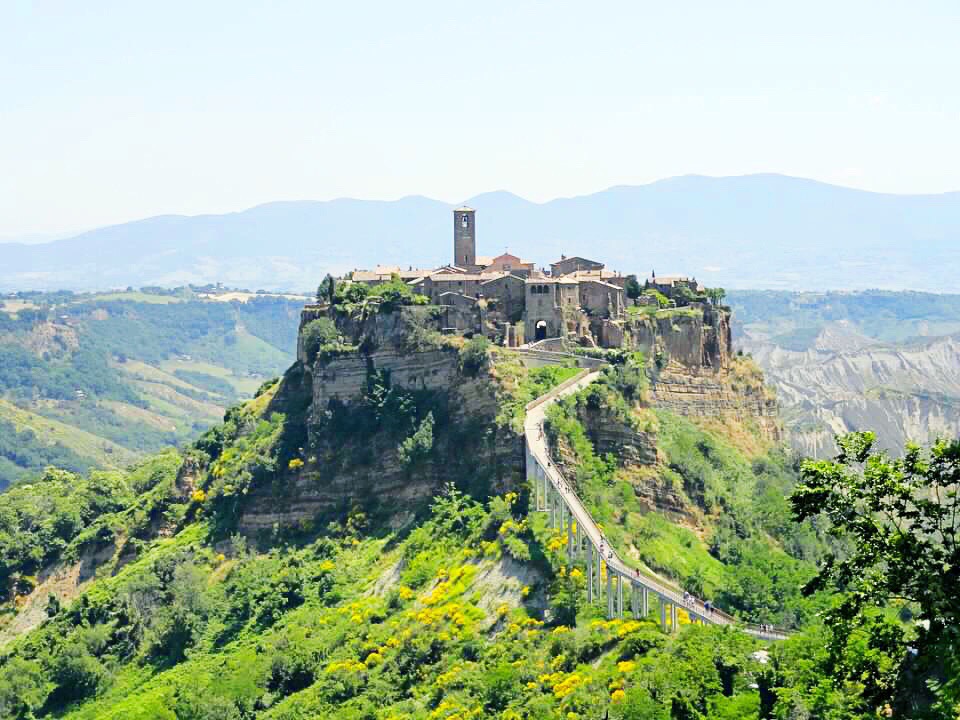 From the beginning of the bridge an imagination as active as mine could look out and pretend it was the Great Wall of China. But it wasn’t. I was in Italy, the sun was searing hot on my back, and I was about to cross the chasm that would take me to The Dying City. 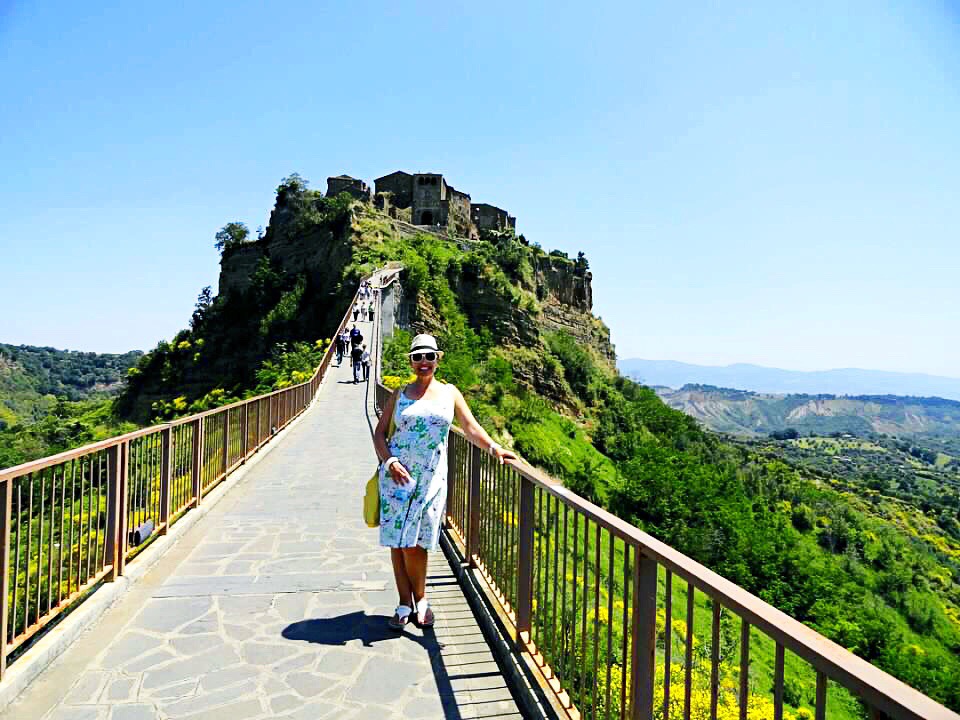 For years my friend Silvana had been telling me I should visit this fantastic little town, suspended in the sky. She told me there were less than 100 locals still living there and that American tourists and wealthy Italians had been buying up the (very old) houses as vacation homes.

Finally I was here.

Civita di Bagnoregio is one of the most sensational hilltop towns in all of Italy.

There is a free PDF at the end of this post – make sure you read to the end!

Why You Should Visit Civita di Bagnoregio

One of those fantastic little Italian towns that you wouldn’t necessarily just stumble upon by accident, Civita is a little bit off the beaten path, midway between Orvieto in Umbria and Viterbo in Lazio. I finally made it there a few years back when I was staying near Viterbo and we were able to make a little detour on our way to Orvieto for the day. 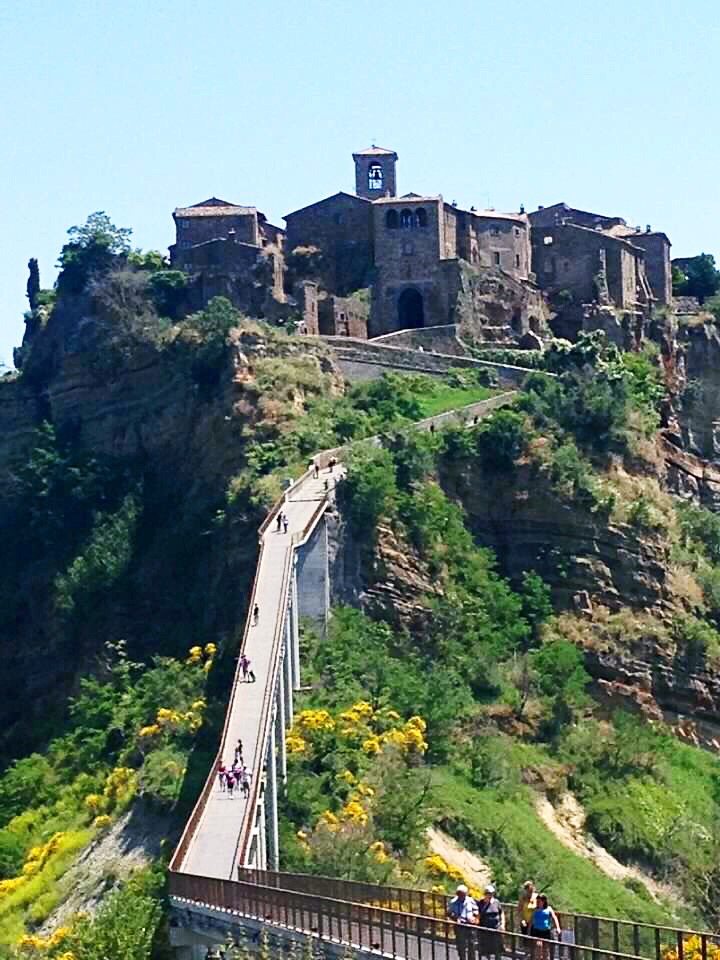 The little town of Civita sits atop a hill made of volcanic tuff, high, high above a huge canyon, overlooking the Tiber River valley. (I had to google volcanic tuff – it is stone made from volcanic ash during an eruption. In Civita’s case it is friable tuff, which is prone to breaking apart under stress)

The stretch of land that once connected Civita to nearby Bagnoregio has eroded away and now the only way to access the little town is via a footbridge. No cars or trucks can go over, the only motorized vehicles are mopeds and the occasional motorbike.

In Italy Civita de Bagnoregio is known as La Citta Che Muore, or the dying city. Over the centuries (or maybe millennia?) the city has been eroding and literally falling away. 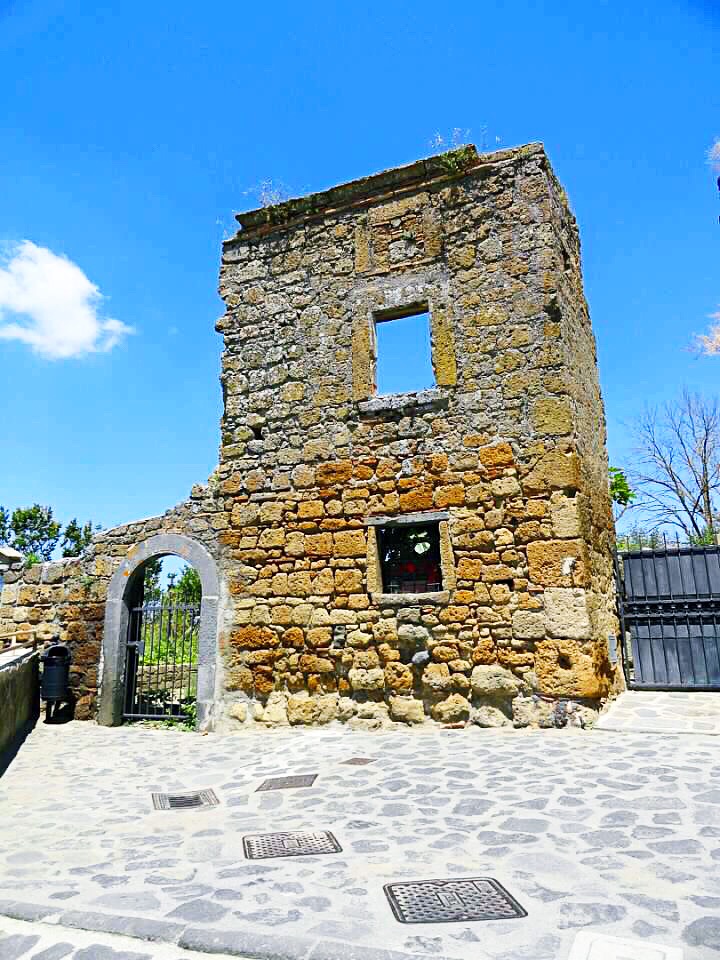 Turning a corner we stumbled across a Renaissance palazzo, repleat with a big wooden door, shuttered windows and ivy growing over the façade. Turns out a façade is all it was – the rest of the home had fallen down the eroding hillside decades earlier. 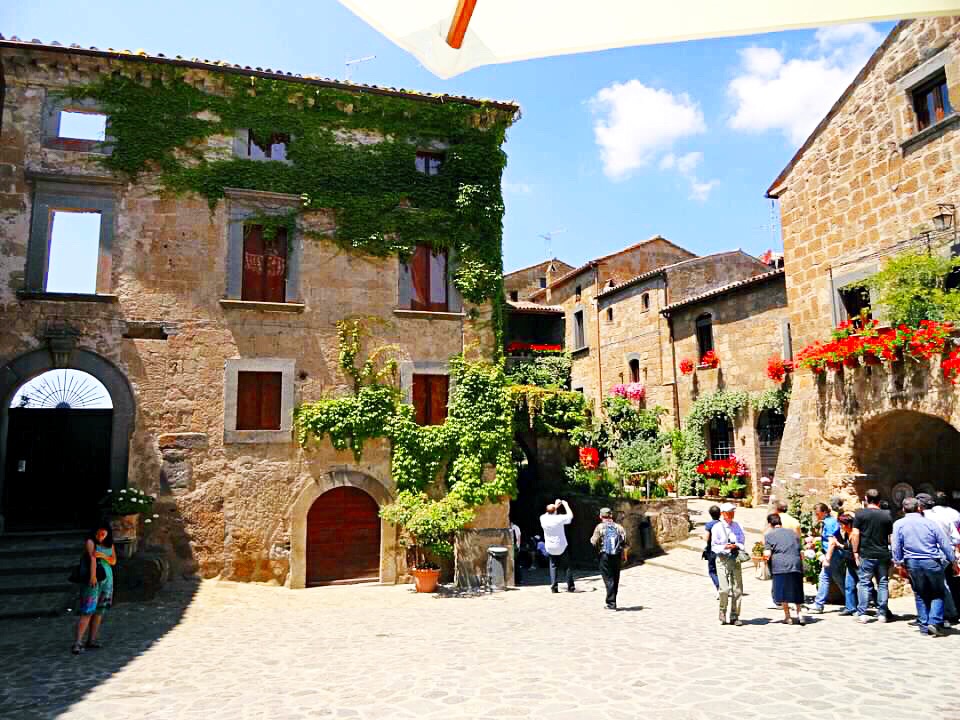 As we wandered we found other shells of homes that had fallen victim to erosion. 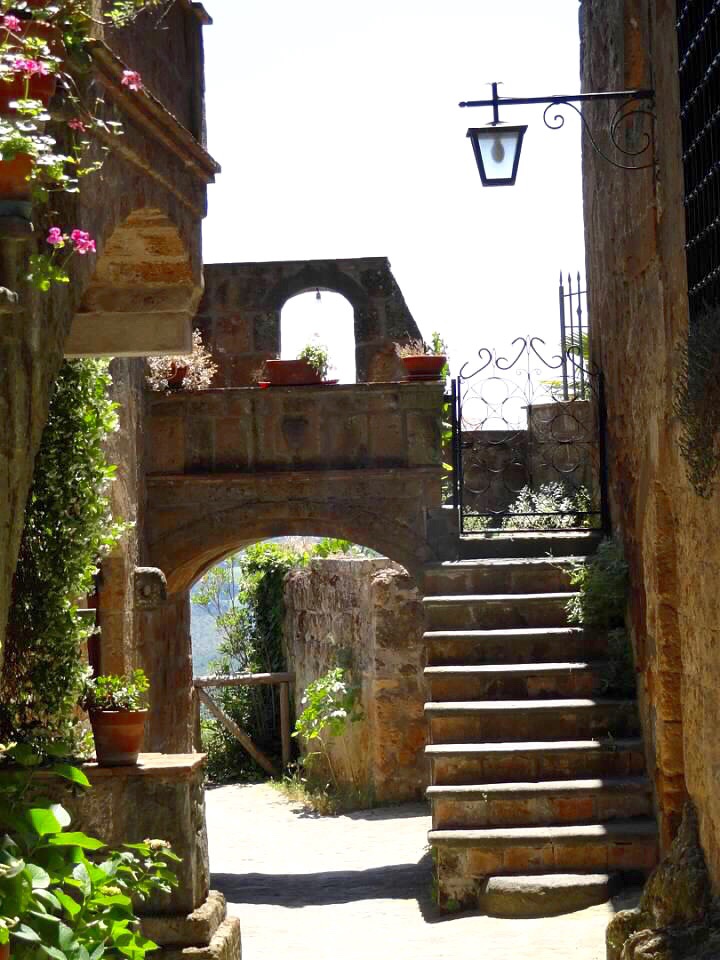 Over the past few generations the young folk moved out to more modern towns that offered an opportunity to work, and the old folk started dying off, hence the double entendre of the dying city.

As with approximately everywhere in Italy, Civita has a fascinating history.

The Etruscans built the huge stone passageway that leads into town when they founded Civita more than 2500 years ago. (This entire area is full of Etruscan tombs and archeological treasures.) In the 12th century the passageway was decorated with the Romanesque arch that you now walk through as you leave the modern world and enter a village that hasn’t changed much since the Middle Ages.

Saint Bonaventure was born here in 1221 and died under mysterious circumstances in 1274. I couldn’t find anything particularly fascinating about him, but when you first arrive in Civita you see an empty space where his childhood home fell down the hill centuries ago. 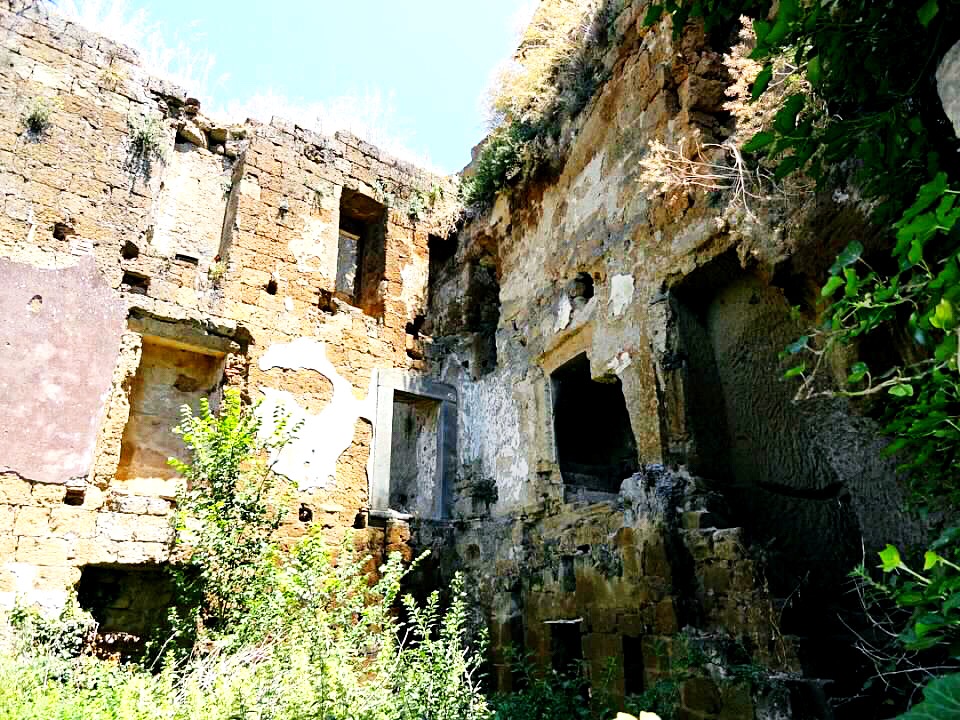 By the 16th century Civita had begun its decline as life began moving to nearby Bagnoregio. At the end of the 17th century a massive earthquake sped up the town’s race with erosion, forcing the municipal government and the bishop to also move to Bagnoregio. 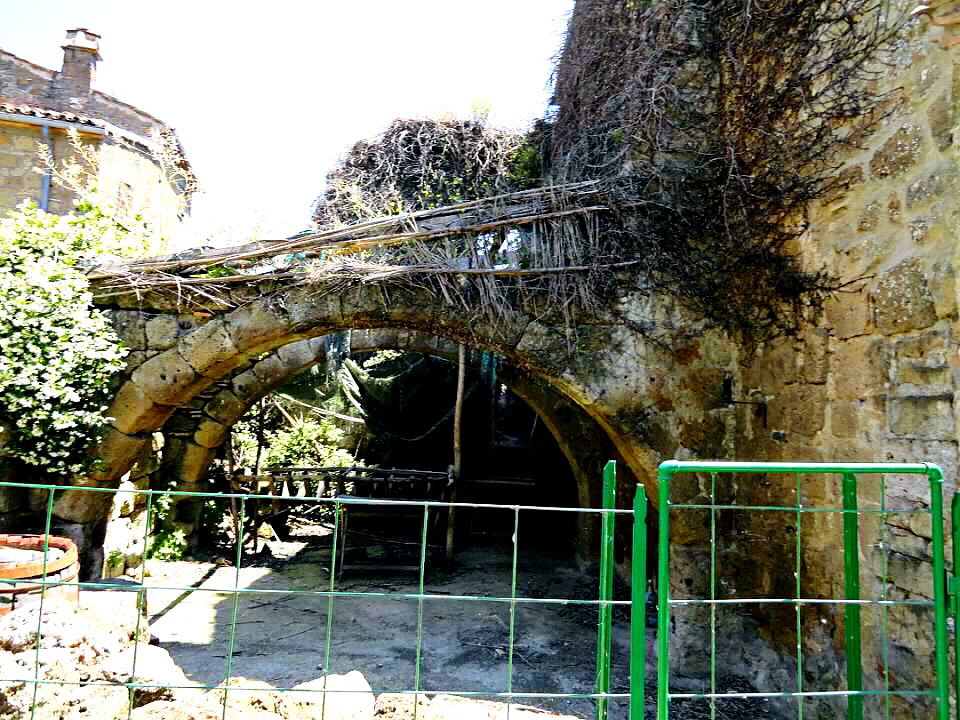 In the 19th century erosion reached the layer of clay below the volcanic tuff, fast tracking the speed at which the town was falling down the hill. In 2004 there was talk of strengthening the town by reinforcing the plateau with steel rods. I don’t know how far that has come along, but in 2006 Civita made its way onto the World Monuments Fund 100 Most Endangered List.

There are now only 5 year round residents in Civita, a number that swells to around 100 over the summer. 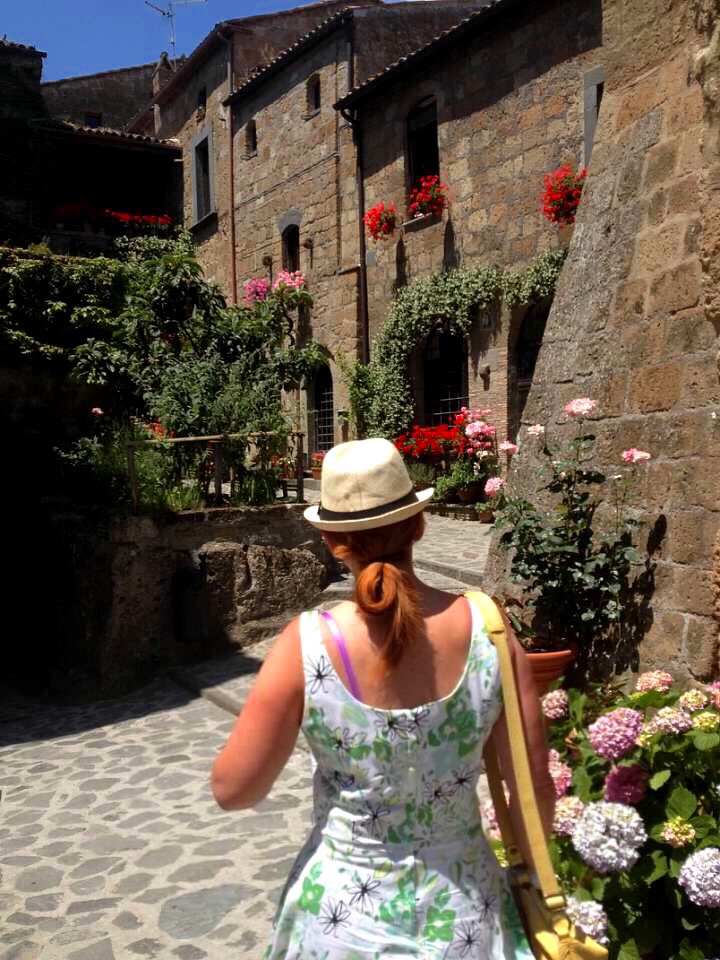 Wandering past vacation homes in Civita

Locals cross the bridge by day to run the eateries and artisanal shops that keep this island in the sky running. 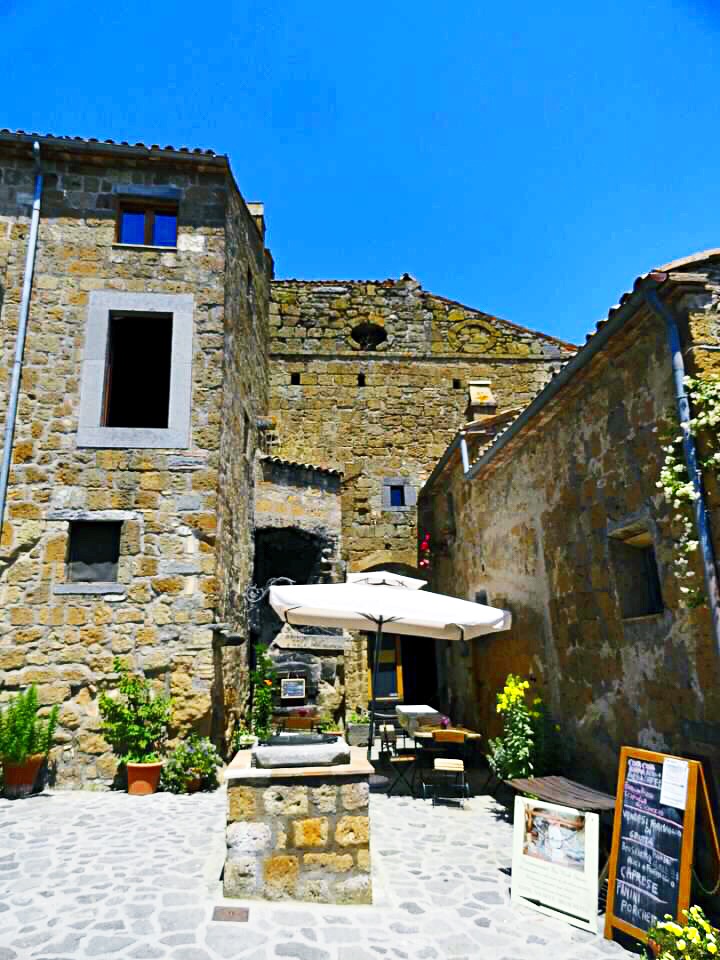 Don’t expect to find tourist shops or signs leading you to museums or notable sites – although Civita di Bagnoregio does get tourists coming to explore its cobblestoned streets it can in no way be described as a tourist town. Which in my opinion is even more reason to love it! 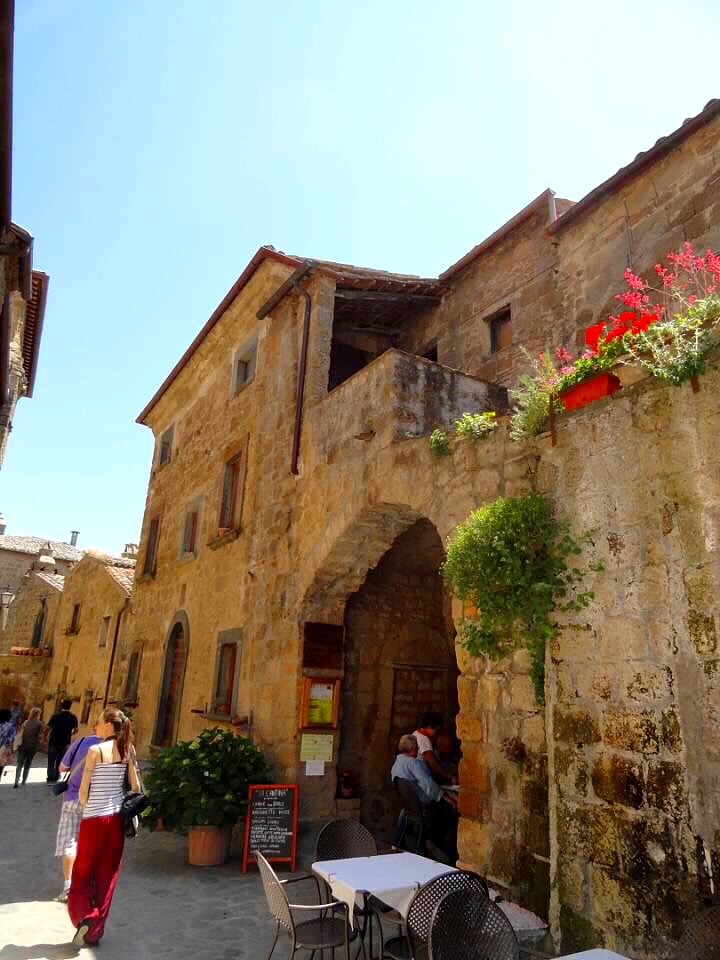 We stopped at a restaurant for some local bruschetta (definitely recommended!) and the owner explained the history of the giant olive press inside. The press itself is 1500 years old and up until the 1950’s or 60’s was operated by blindfolded donkeys who walked round and round all day. 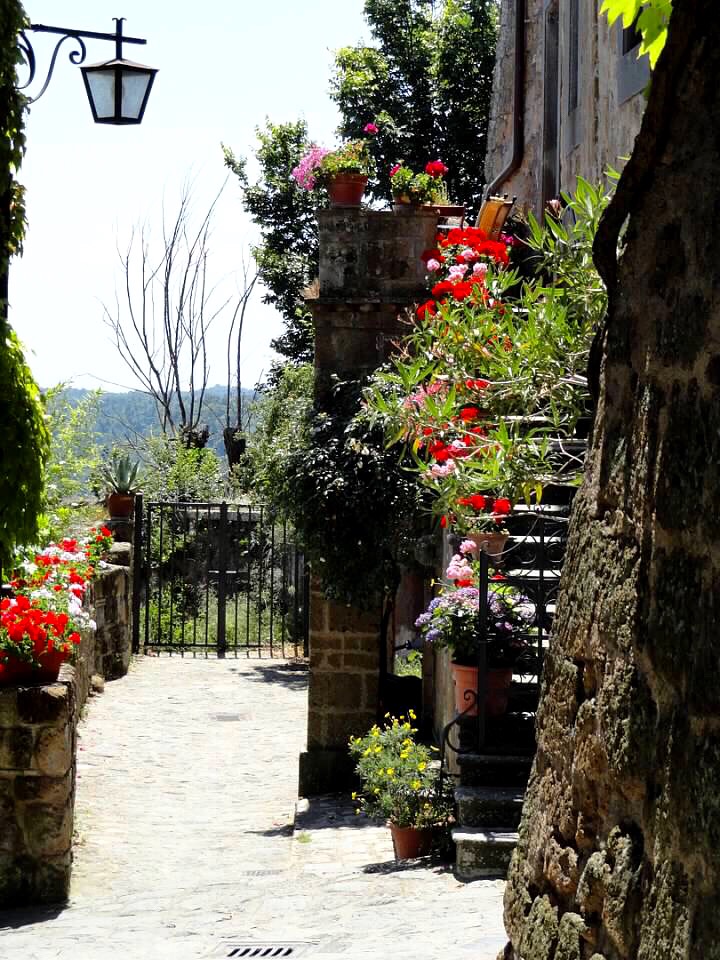 Vacation homes with views from the top of the world

Make sure to visit the church in the heart of town. Originally an Etruscan temple it was repurposed as a Roman temple before eventually becoming a catholic church. Chunks of the temple columns line up outside the church like broken sentries whispering secrets from the past. 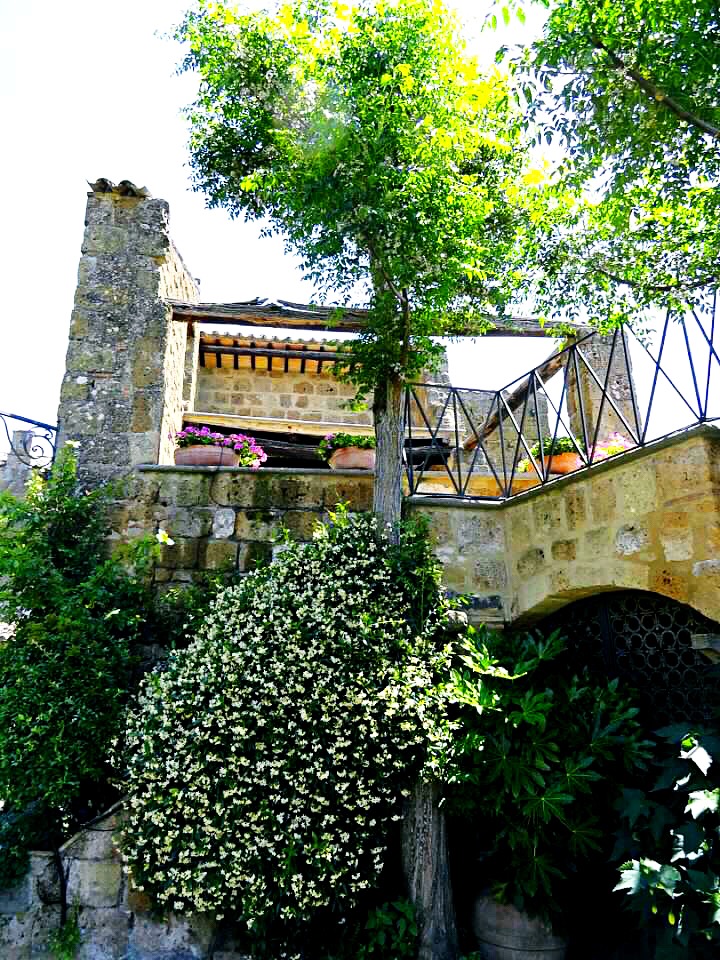 The perfect spot for an evening spent in Civita

I haven’t yet stayed the night in Civita di Bagnoregio, but it is on my ever growing list of things to do in Italy. With no bars or shops open and no wandering crowds of locals or tourists, evenings sitting out under the stars with a glass of Orvieto wine must be incredible. I can only imagine how beautifully the moonlight plays on the old buildings after the sunset has painted the huge valley below in Umbrian gold. 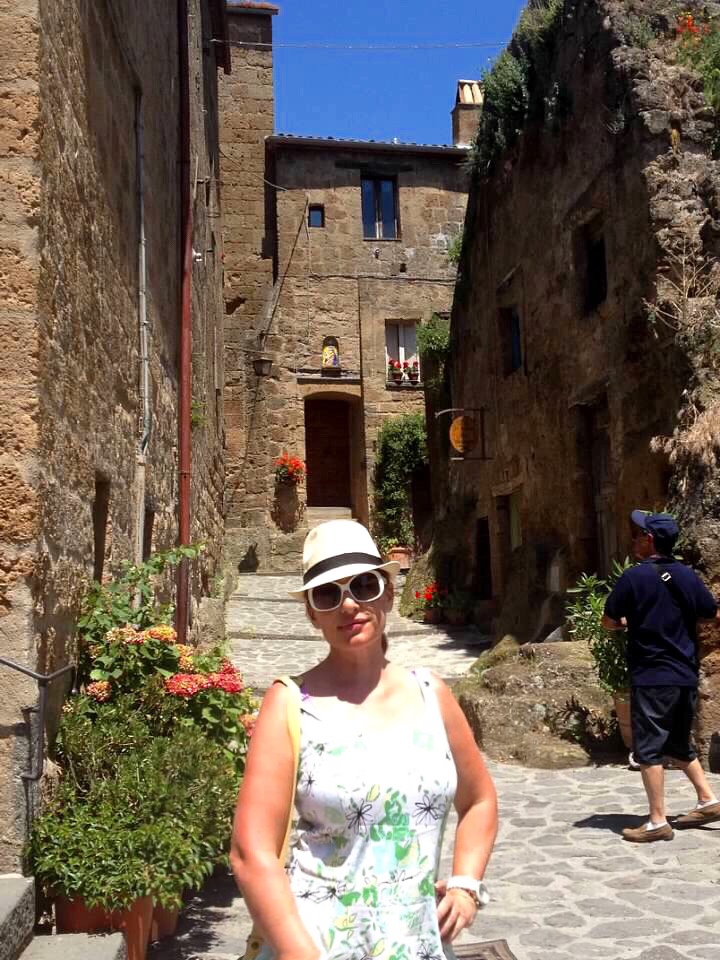 The houses in Civita date back to the Middle Ages

How To get There:

From Orvieto train station you can catch a bus to Civita di Bagnoregio.

By car from Orvieto by car take SR71. The drive is around 35 minutes.

Do you get stuck trying to plot out the perfect trip? Or do you feel overwhelmed trying to figure out where in Italy to go, what to see and what to miss this time? In my book Glam Italia! How to travel Italy: Secrets To Glamorous Travel (On A Not So Glamorous Budget)

I talk about a questionnaire that I give to all my Glam Italia Tour travelers to help me plan the perfect travel experience for them. The Questionnaire is available to my blog readers as a free, downloadable PDF that you can print and use as many times as you want. It works for anywhere in the world that you are planning to travel to!