5 Tips For Buying Lip Gloss For Your Wedding

Are you planning on wearing a colored lip gloss on your wedding day? A shimmery, juicy lip always looks fresh and inviting.

The problem is not all lip glosses are created equal – even major brand, expensive lip glosses can be troublesome, so I recommend test driving your lip gloss for a day before committing to it for your wedding. You will find that almost all lip glosses look great for the first few minutes, but after a while plenty of them can look or feel awful.

So in the interest of keeping your lips looking luscious all day and night, here are 5 things to look for when choosing a lip gloss for your wedding:

Most lipglosses will glide on super smooth and look gorgeous. In the beginning. But after they’ve worn in for a while many often get sticky and tacky and ball up on the lip. This is not a winning look for your wedding!

Is your lip gloss slip sliding around the outsides of your lips? A lip gloss that has migrated outside the lip line can make you look like you just finished eating a plate of chicken wings. Light reflects off the shiny surface making it look even worse in pictures!

Some lip glosses really dry the lips out, leading to painful cracking and chapping.  As your lips start to feel dry you add more gloss thinking it will soothe them, which ends up making the problem worse and keeping it in a perpetual cycle of dry, sore lips.

Your groom is not going to want to smooch a super glossy lip either – he doesn’t want that slippery slime all over him.

Most glosses look somewhat even as they go on, but the color often gets patchy after a while. Look for a gloss that has a good color pay off – true color that applies and holds evenly

I have a wedding coming up where the bride is wearing a floor length blusher veil. That is, a veil that will cover her face and drape down to the floor as she walks down the aisle.
Doesn’t that just sound fabulous??

I love the idea of that frisson of mystery that everyone will feel the moment the cathedral doors open and she is standing there, all back-lit and enigmatic. I love that she will float down the aisle in a diaphanous mist of glamour, and no one will know quite how she looks until the veil is lifted.

Blusher veils and especially floor length blusher veils require a little extra thought and planning on the part of your beauty team.
Your hairstylist has to factor in the weight of the veil and how it will pull or weigh down the front of your hairstyle. He also has to think about the products he is using. They can’t be even slightly sticky in case they grab or adhere to the veil, and shine products can’t be too oily or have any residue that can attach to it.

For makeup (my department) there are several considerations to keep in mind as well. Here are 3 of them:

A blusher veil puts a soft focus diffusion on the face, so the facial features need to be a little more accentuated to make sure they don’t completely disappear. This doesn’t mean makeup overkill, or even big, dark makeup, instead have your makeup artist gently bring out your eyebrows, shape your cheekbones, and fill out your mouth.

You want you skin to look luminous and glowing, but you have to stay on top of any excess sheen on your forehead and nose that can come in contact with the veil, leaving a foundation colored smudge to precede you down the aisle. Be sure to use a mattifying primer underneath your foundation through your T Zone, and apply an extra layer of translucent setting powder to your forehead and nose before heading to the church.
If you tend to get oily/shiny across your forehead and nose, use blotting papers before you get out of the car.
I give my brides Tatcha Aburatorigami blotting papers. They are beautiful and luxurious and work brilliantly. 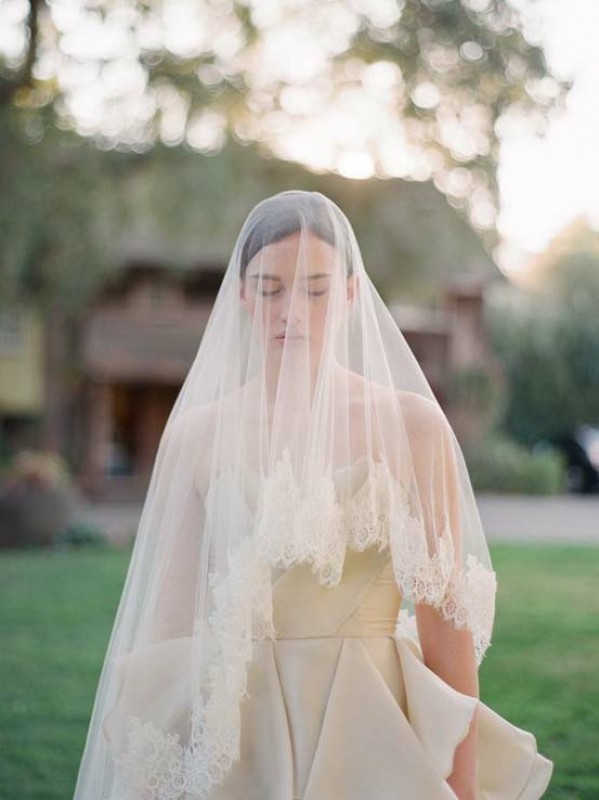 You can glossy-up your lip after the ceremony, but for the time the veil will be over your face stay away from a high sheen lip. Opt instead for something in a matte or soft satin finish that won’t grab onto the veil and make a mess both on the veil, and as a consequence, on your mouth. If you’ve ever dealt with wind whipping strands of your hair onto your lip and then onto your face you will know what I’m talking about!
As you walk your veil will move and flutter a little, so you need to make sure you wont have a problem if it does touch your mouth as you move.
One lip trick that I love when my bride is wearing a blusher veil is to use a deeper toned stain on the lip. It makes a beautiful statement and looks looks stunning though the veil, and it’s safe for him to kiss without worrying that he will end up wearing it.

It’s an honor to be asked to be a bridesmaid.
And it’s kind of fun to think about celebrities stepping out of the spotlight and taking a secondary position to be a bridesmaid for someone they hold dear.
This is a repost of an article from RomanceBeat.com about 11 celebrities who gorgeously walked down the aisle as bridesmaids for their close personal friends and family in the most recent years, without missing a step.

1- Our favorite heiresses, Paris and Nicky Hilton, were dressed pretty in pink for their cousin Brooke’ s wedding in Cabo San Lucas.

3- Lady Gaga becomes closely familiar to weddings as she plans her own (which we can’t wait for!) and still has time to serve at a New Orleanais wedding for one of her closest friends. She also served at a Cabo wedding for her best friend and former schoolmate, Bo O’Connor.

5- We had a “The Hills” reunion at the wedding of Maura McManus where Lauren Conrad and Lo Bosworth attended, in which Conrad served as a lovely bridesmaid.

6- Sarah Jessica Parker served as a bridesmaid of her friend and former assistant, Melinda Relyea and James Kearns.

7- “Hunger Games” star, Jennifer Lawrence, served as a bridesmaid for her brother Blaine and her new sister-in-law, Carson Massler. It was a wedding that even Martha Stewart approved of.

8- Mila Kunis served as a bridesmaid for her brother’s wedding in St. Petersburg, Florida. Her date was her fiancé and former costar, Ashton Kutcher (another wedding we are so excited to see!)

9- Lena Dunham looked awesome in a grey bridesmaid dress for her best friend.

10- Rihanna was also a lovely bridesmaid for her own person assistant, Jennifer Rosales, who is like a big sister to the singer.