The city center still reflects the Roman street plan, the ancient forum is now the site of Piazza San Michele, and the Roman amphitheater became the current Piazza dell’ Antifeatro. In 56 B.C Julius Caesar, Pompey and Crassus were there at the Lucca Conference reaffirming their political alliance, known as the First Triumverate.

A gorgeous place to base your Tuscan vacation, Lucca is also a fabulous day trip from nearby Florence (roughly an hour by train), Genoa, the Italian Riviera, Pisa, the Tuscan beach towns around Viareggio – lots of great holiday spots in Tuscany and Liguria.

Should you take the time to visit Lucca be sure to buy the local (world famous) olive oil and the local wines, but also make sure you don’t miss these 10 things:

10 Things You Absolutely MUST Do In Lucca

How do you stand out in the city of 100 churches? San Martino, the Lucca Cathedral, is one of the first sites you will see if you arrive by train. 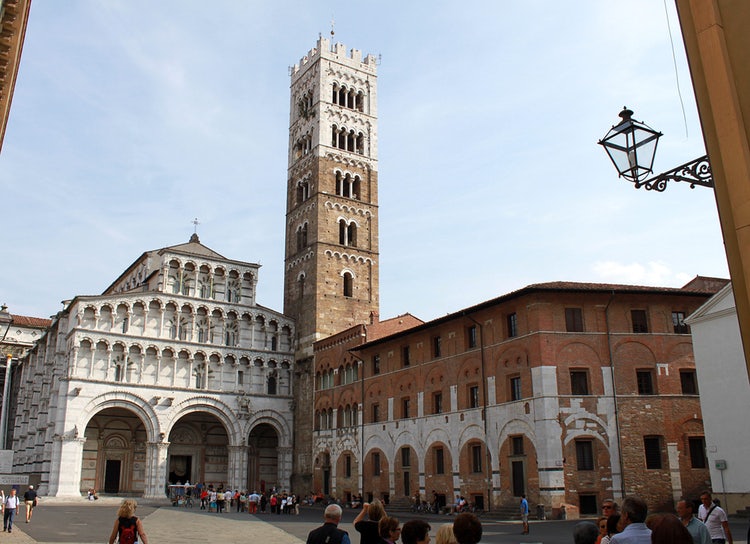 Built in the 6th century and consecrated in 1070 by Pope Alexander II, the current exterior was built in the 1200’s. At first it seems an odd place to put the cathedral, off to the side at the edge of town, but the center of town was already overcrowded when building began. San Martino stands in a large piazza of the same name, almost as an afterthought, but if you sit anywhere in the piazza and take in the façade you will feel the beautiful tranquility emanating from it.

I particularly love the ceilings inside the cathedral, and also Tintoretto’s Last Supper.

Another stand out basilica that you  must see is the Basilica of San Frediano. It is tucked away a little, so you pretty much have to be on a mission to find it or you could easily pass by. 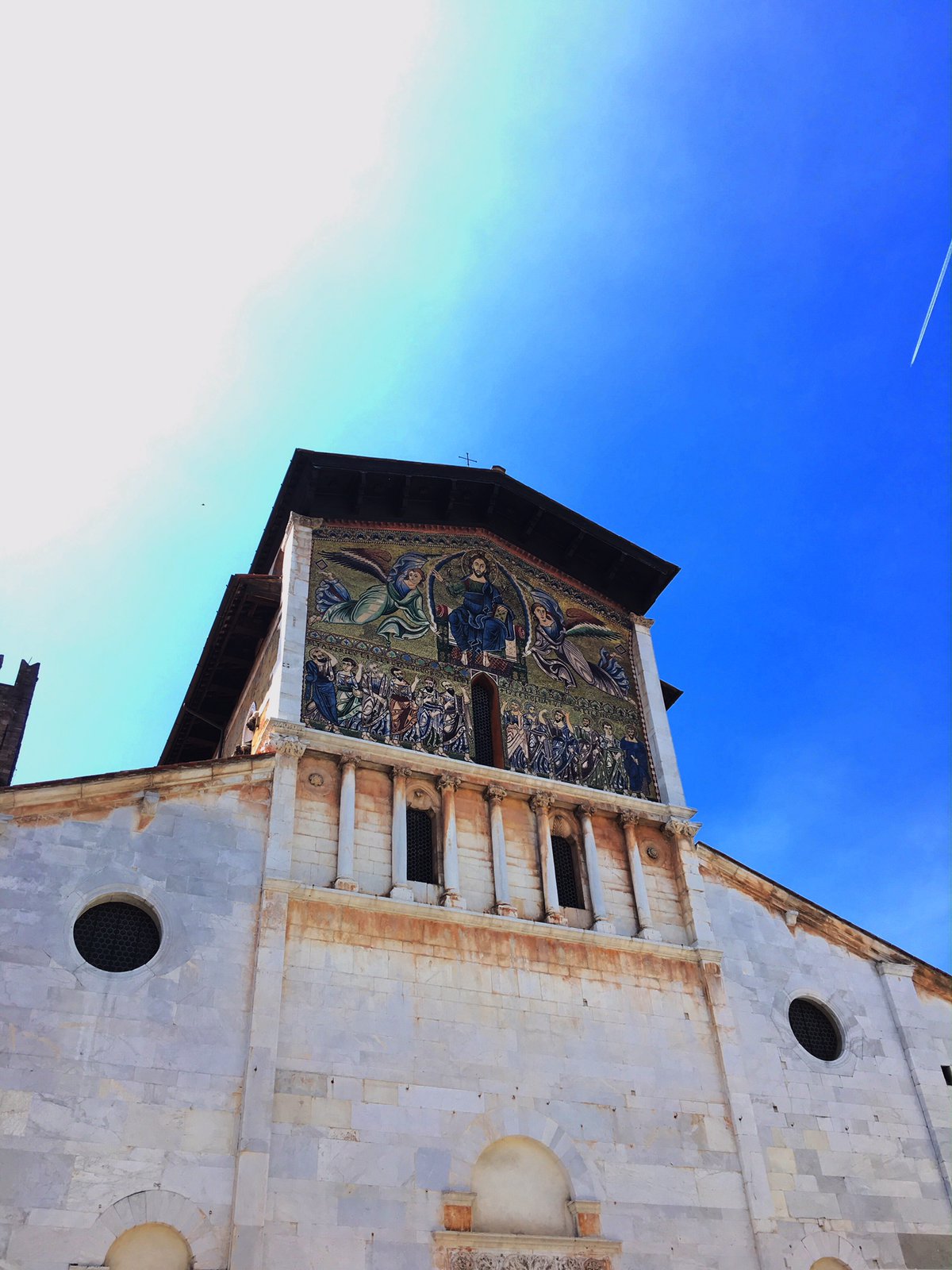 Founded by Saint Fredianus, Lucca’s bishop from 560 to 588, this is one of the oldest churches in Lucca.

Inside the church you will find beautiful frescos from the 1500’s and a 12th century baptismal font with reliefs telling the stories of Moses and also of the Apostles.

But what I love most about this basilica are the mosaics on the exterior. They date back to the 13th century, and are incredibly rare for Tuscany, the only other mosaic façade in the region is at St Miniato al Monte in Florence. 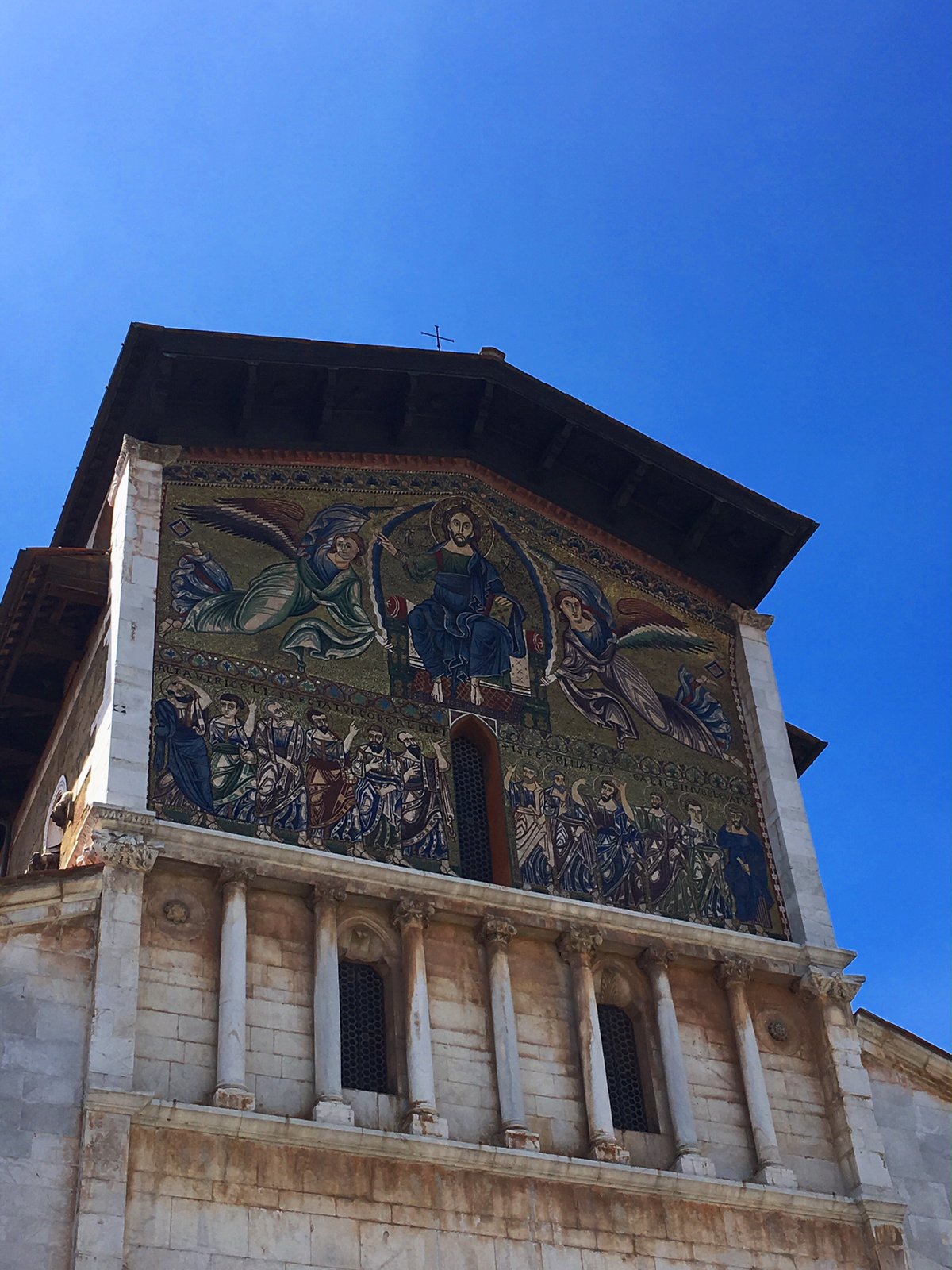 They tell the story of Christ the Redeemer ascending into heaven. The apostles are below him but Mary is missing, having been replaced by a window.

If you get there at the right time of day the sun dances off the mosaics, making them look truly ethereal. (but largely unphotographable!)

By the way my new book Glam Italia! How To Travel Italy is now available here on Amazon.com

The Church Of San Michele In Foro

Another must see church in Lucca is San Michele in Foro. Easy to find in the heart of town, this basilica was built over the ancient Roman Forum. First mentioned in 795, the current building was commissioned by Pope Alexander II in 1070. (busy year for him!) 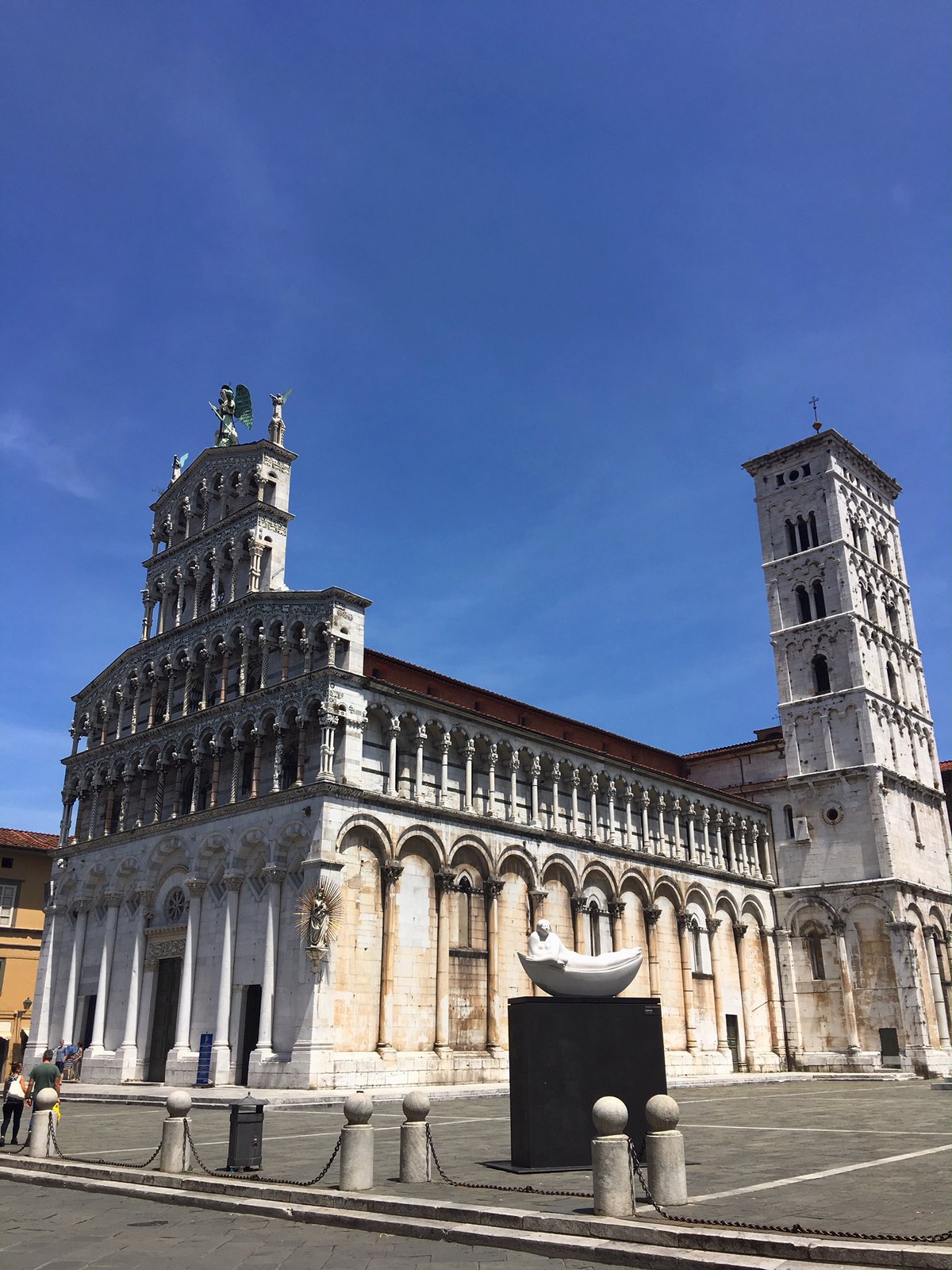 The four levels of loggias on the exterior are truly remarkable. On top of them stands the 4 meter tall statue of St Micheal the Archangel defeating the dragon, flanked by 2 angels. On a sunny day you can see a green sparkle on the statue, which legend says is an emerald planted somewhere in or on it, but it has never been found. 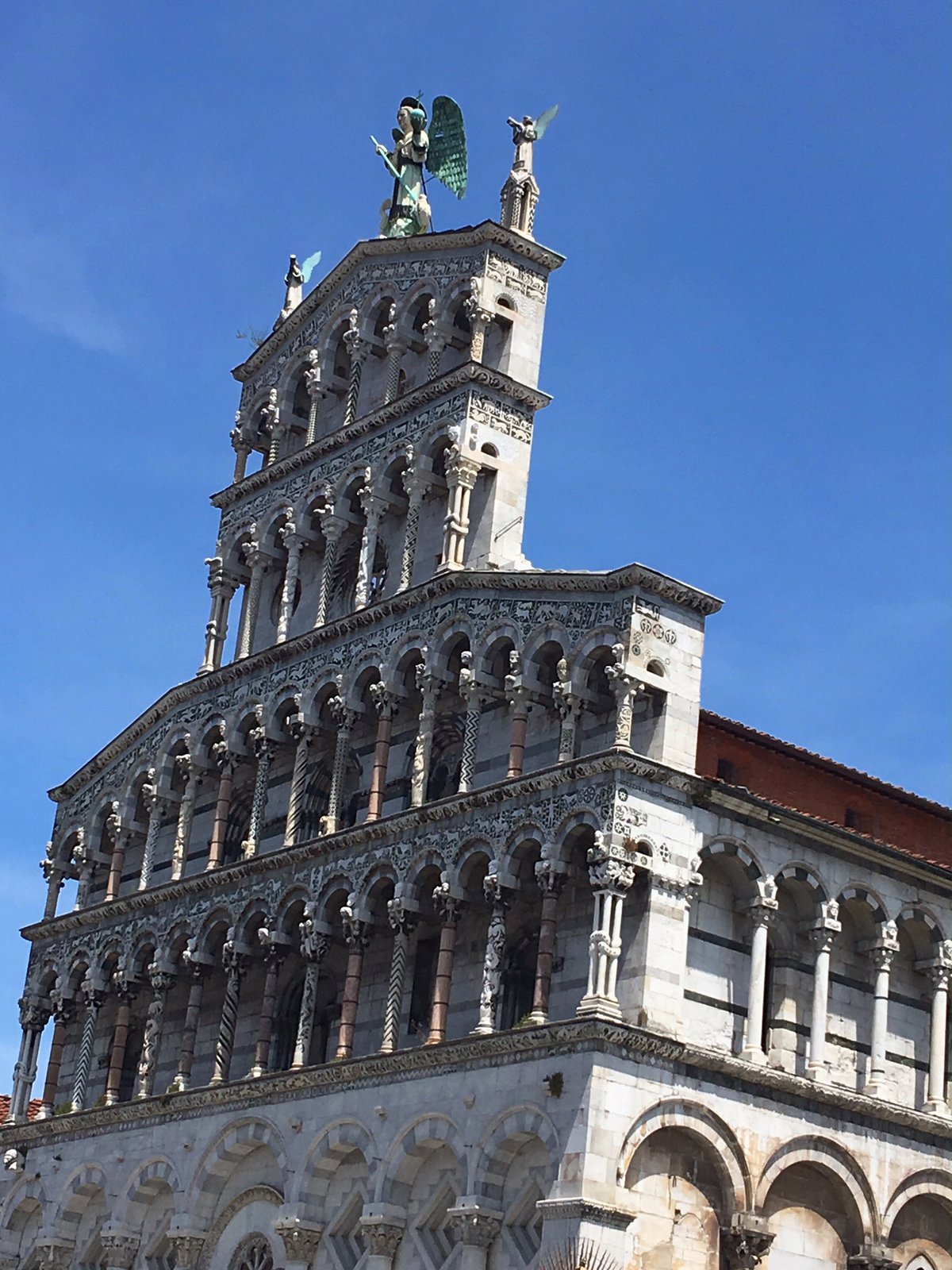 From every angle this church is spectacular, so take the time to walk around it and to view it from different places in the piazza. 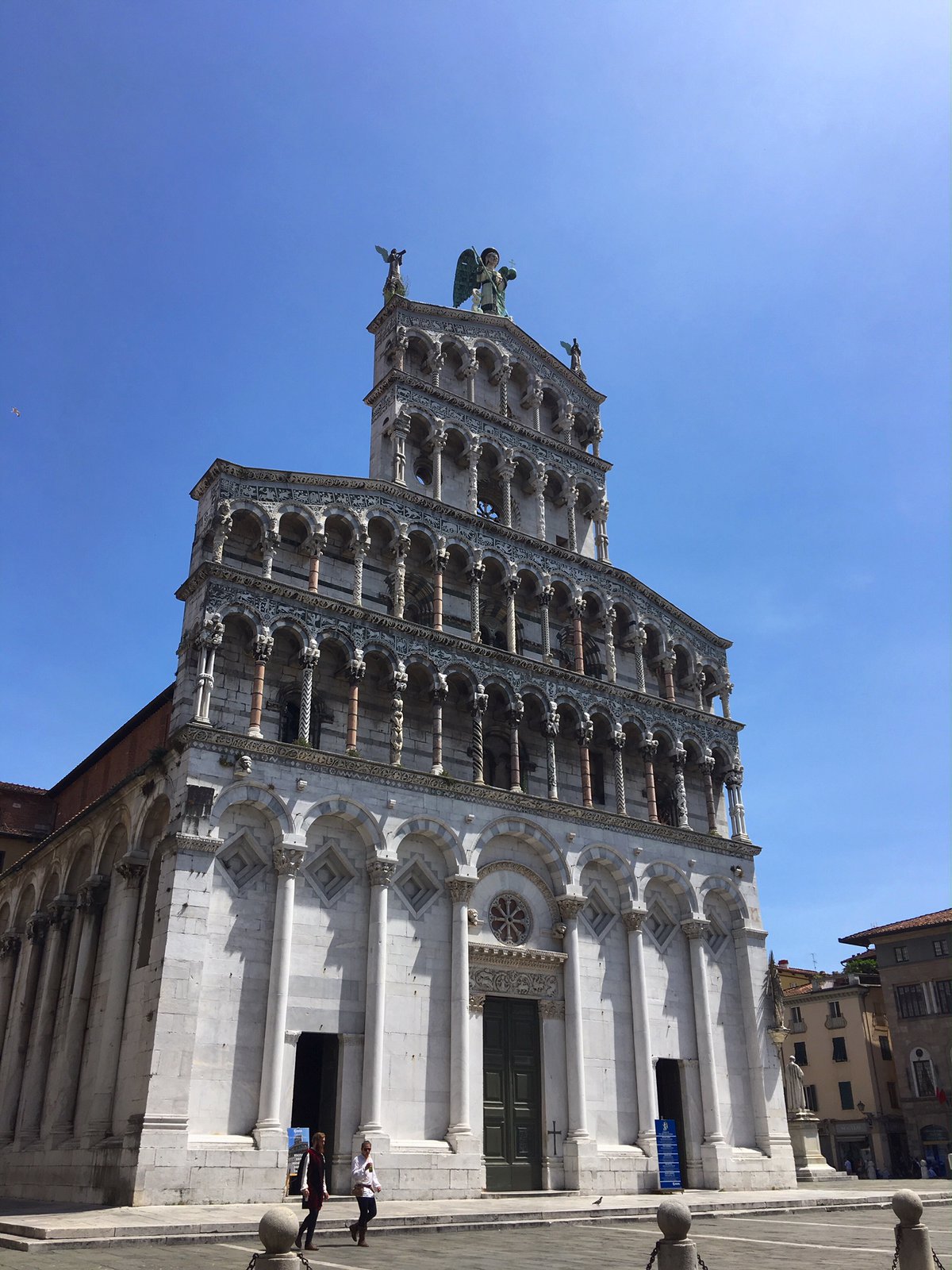 RELATED POST: 10 THINGS YOU ABSOLUTELY MUST DO IN FLORENCE 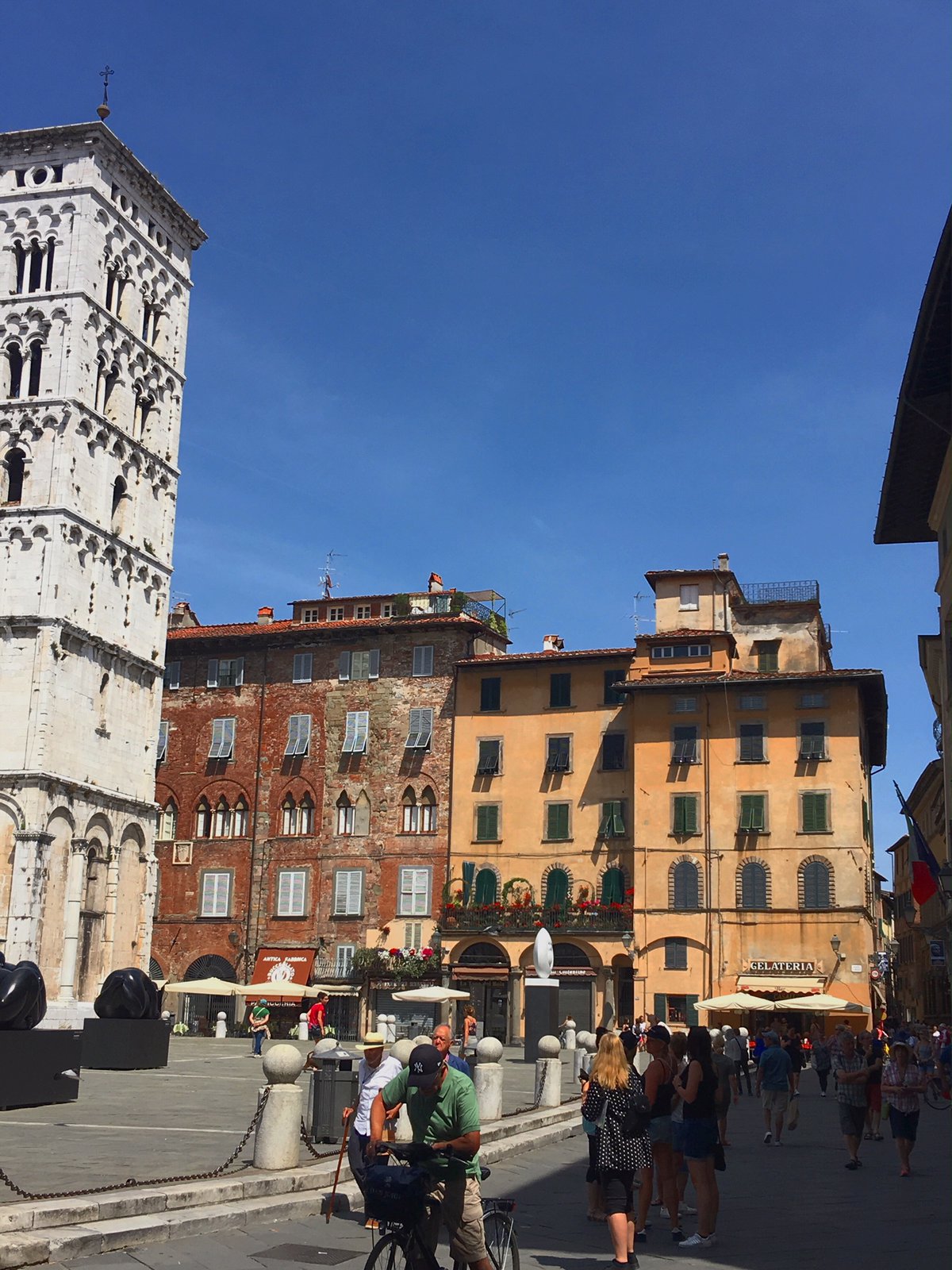 Dwarfed by the basilica and it’s loggia, the piazza of the same name is a must see. Flanked by restaurants and bars you can enjoy coffee, wine, or a meal with a view. On one corner, (via Vittorio Veneto) you will find the Palazzo Pretorio with the clock on the façade and its loggia where you will often find art exhibits or musicians playing.

On Sundays market stalls set up in the piazza, street musicians are playing on the corners, and it is just fabulous!

Look out across the skyline of Lucca (from the wall) and you will see the city’s most important tower, easily identifiable from the rest. The 14th century Guigini tower has a rooftop garden with trees growing on it! 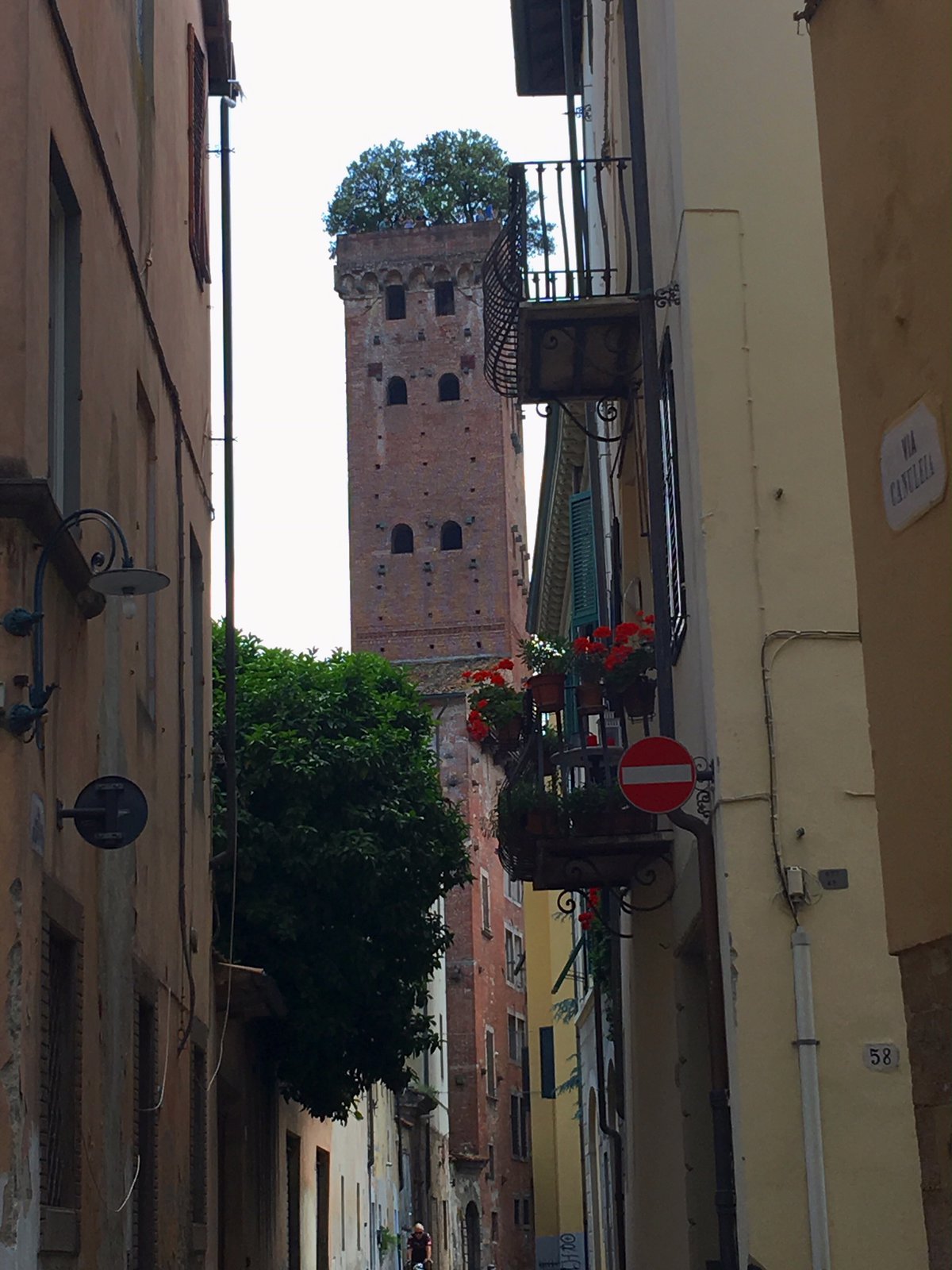 The floor below the garden was the kitchen, from where the chefs and cooks could go upstairs to pick their produce and herbs. Now the tower is open for those strong of thigh to climb. The 360 degree views of the city are spectacular, especially on a clear day. 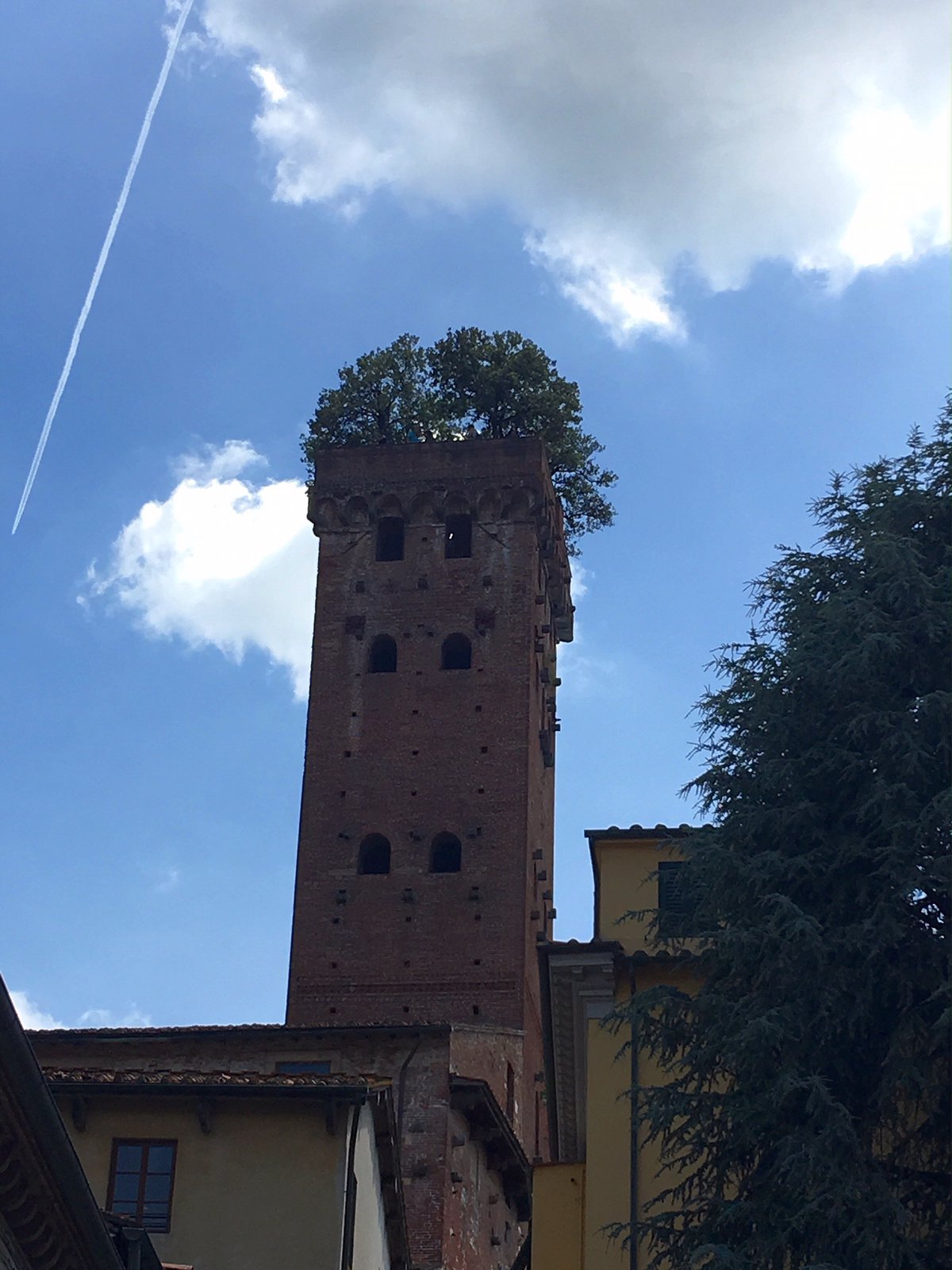 At one time there were around 250 towers in Lucca, but now there are only 9. These were defendable homes during a time of constant raids and also considered a place to hide during the plagues.

Guigini was a wealthy silk merchant who at one time ruled Lucca. He built the tower attached to his palazzo as a sign of his wealth and power.

This bustling piazza was built on the ruins of a Roman amphitheater. The amphitheater was built in the 1st century, its 18 rows of seats being able to hold 10,000 people. It was the heart of entertainment in Lucca. At some point around the 6th century during the Gothic wars the site was fortified, after which houses and even a prison were built on the ruins. 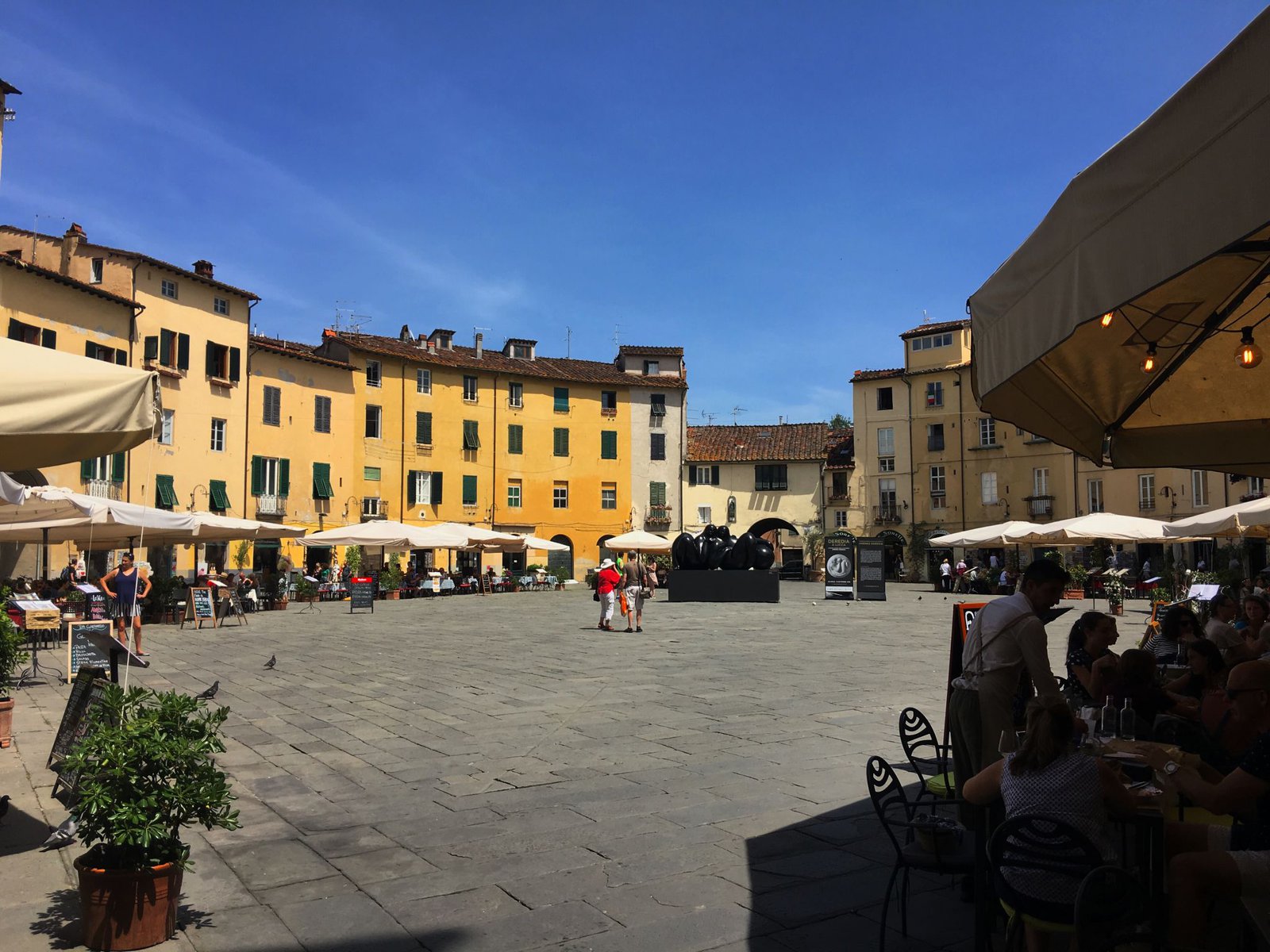 Centuries later it became a piazza, notable for its huge elliptical shape. You are aware of the size and shape when you walk into the piazza from any of the four entrances, but it is best appreciated from above. 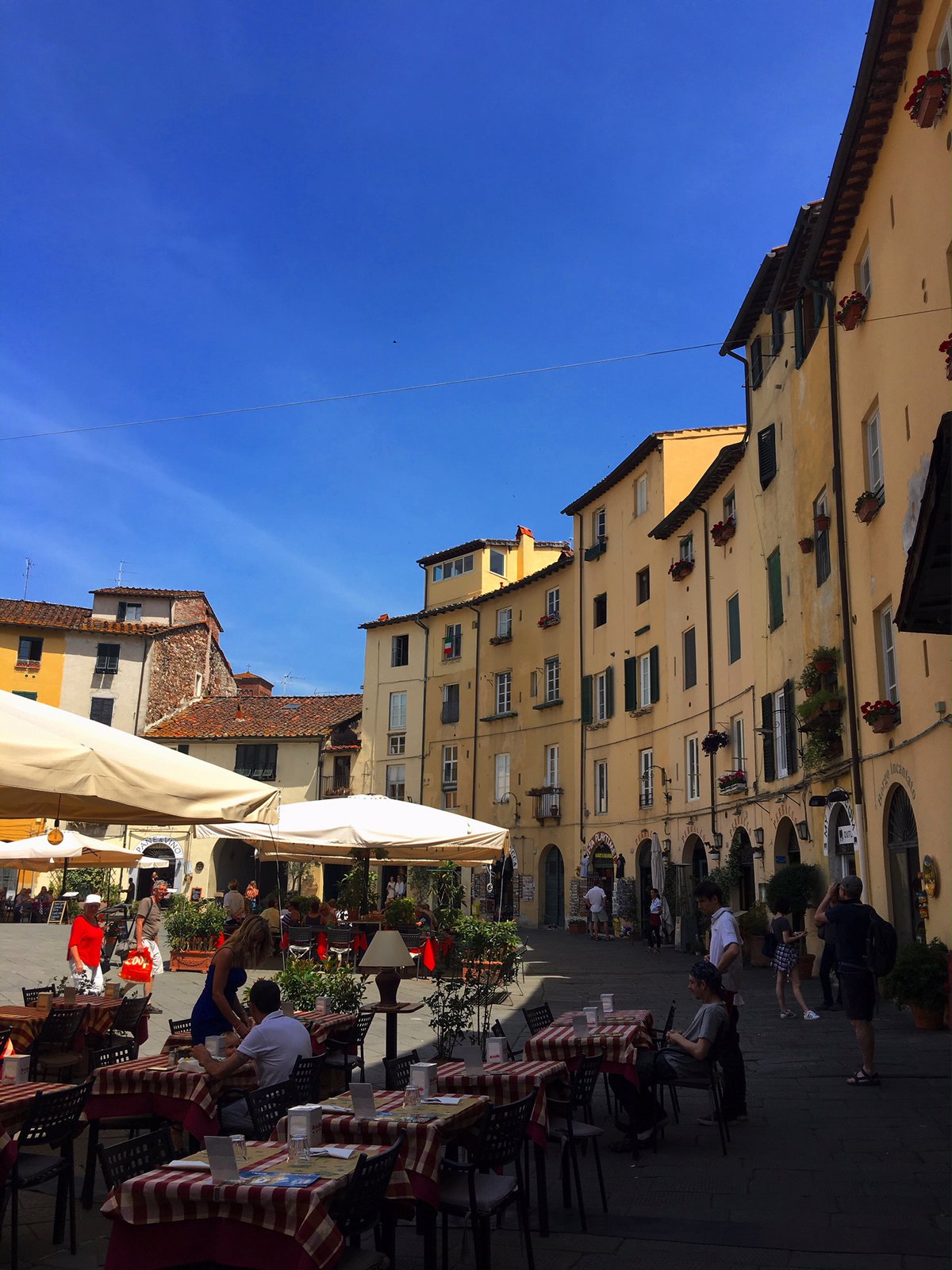 Piazza Antifeatro is ringed with eateries and is a great place to enjoy lunch as well as being one of the nightlife hubs of the city. 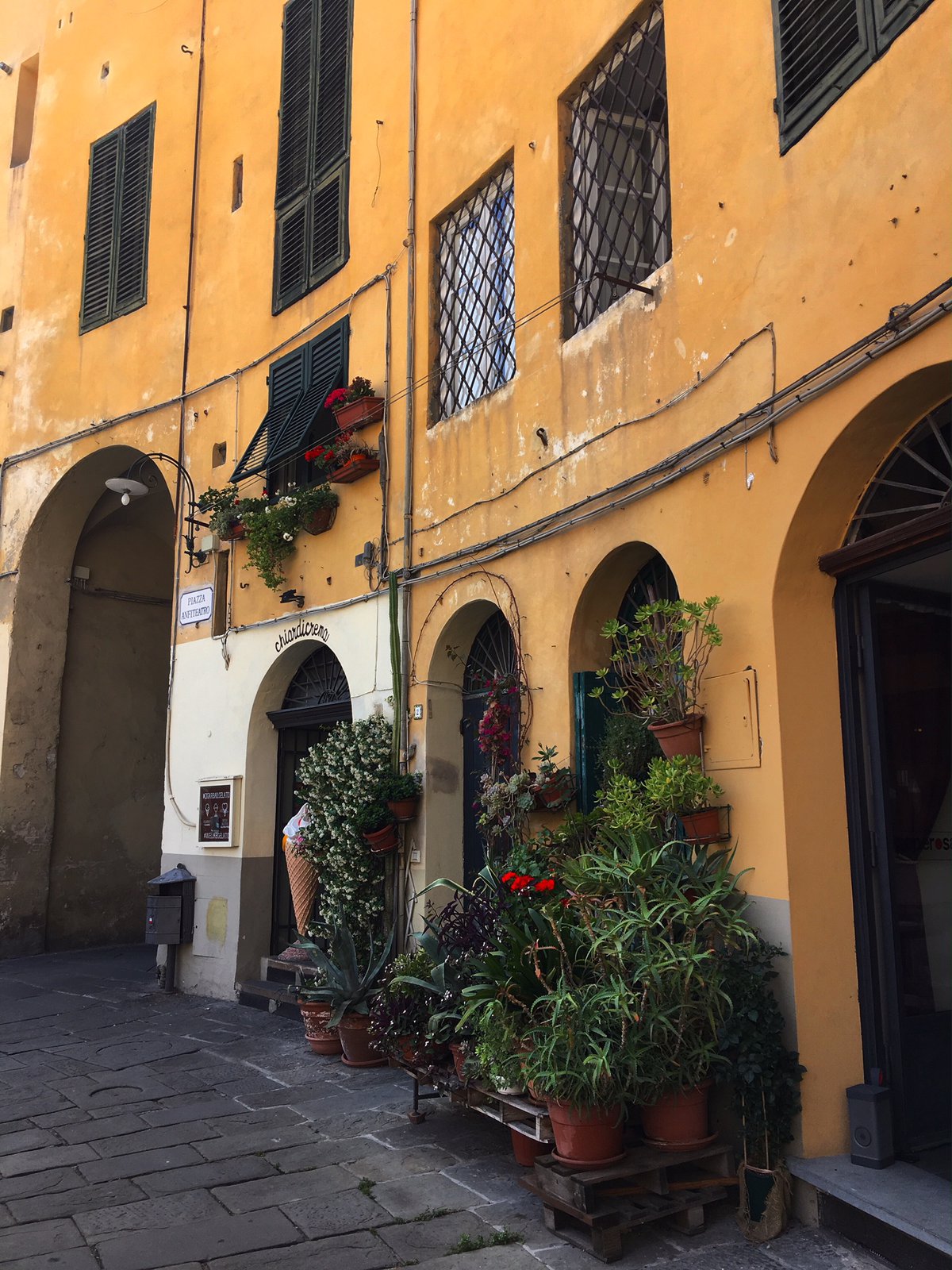 Also known as Piazza Grande, Piazza Napoleone is a large, open air, tree lined square that is a lovely place to cool off in the hot summer months, or ice skate at Christmas time. 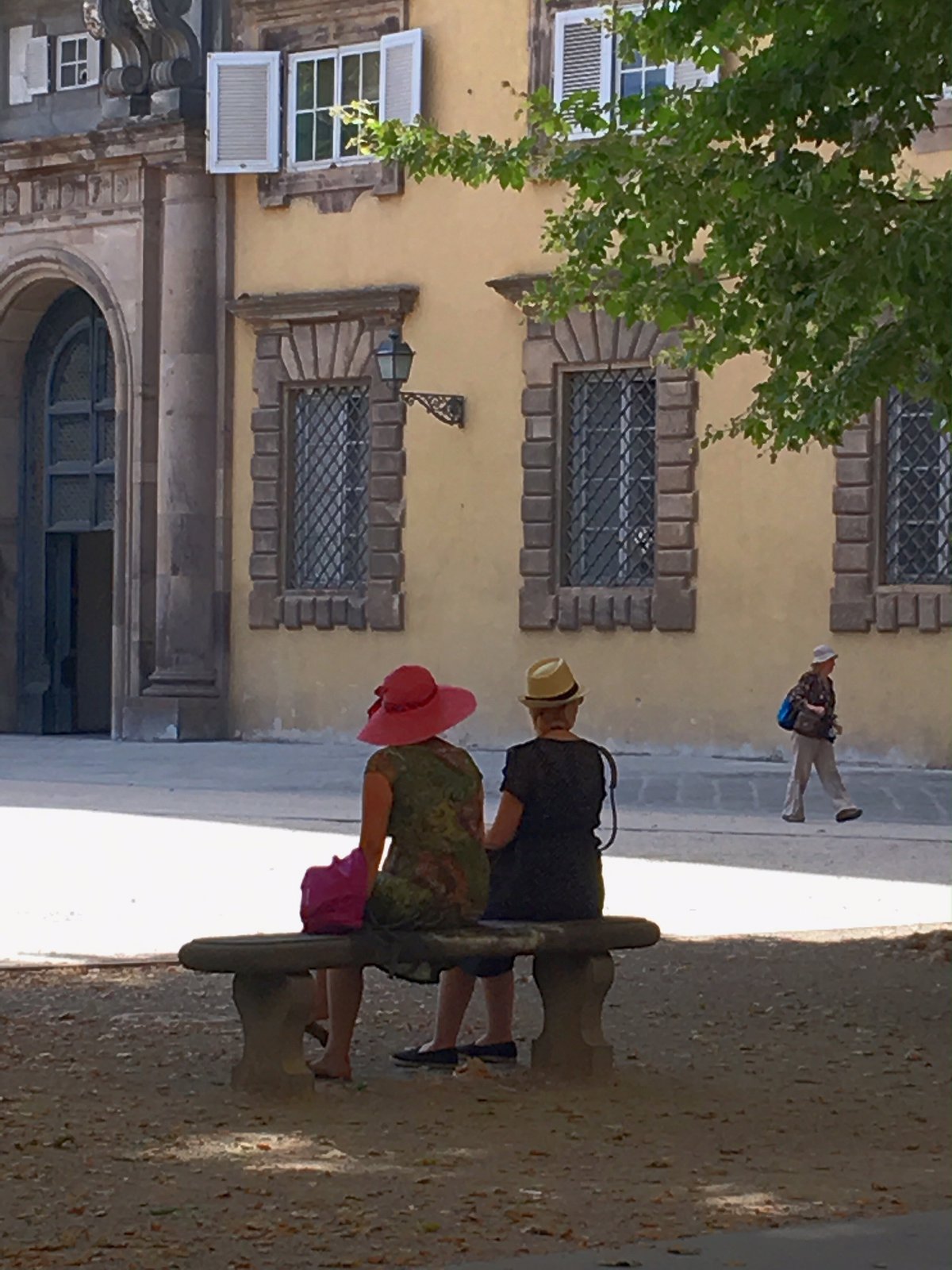 Lined with wonderful restaurants and eateries you can enjoy a Tuscan lunch or a glass of wine with a beautiful view. 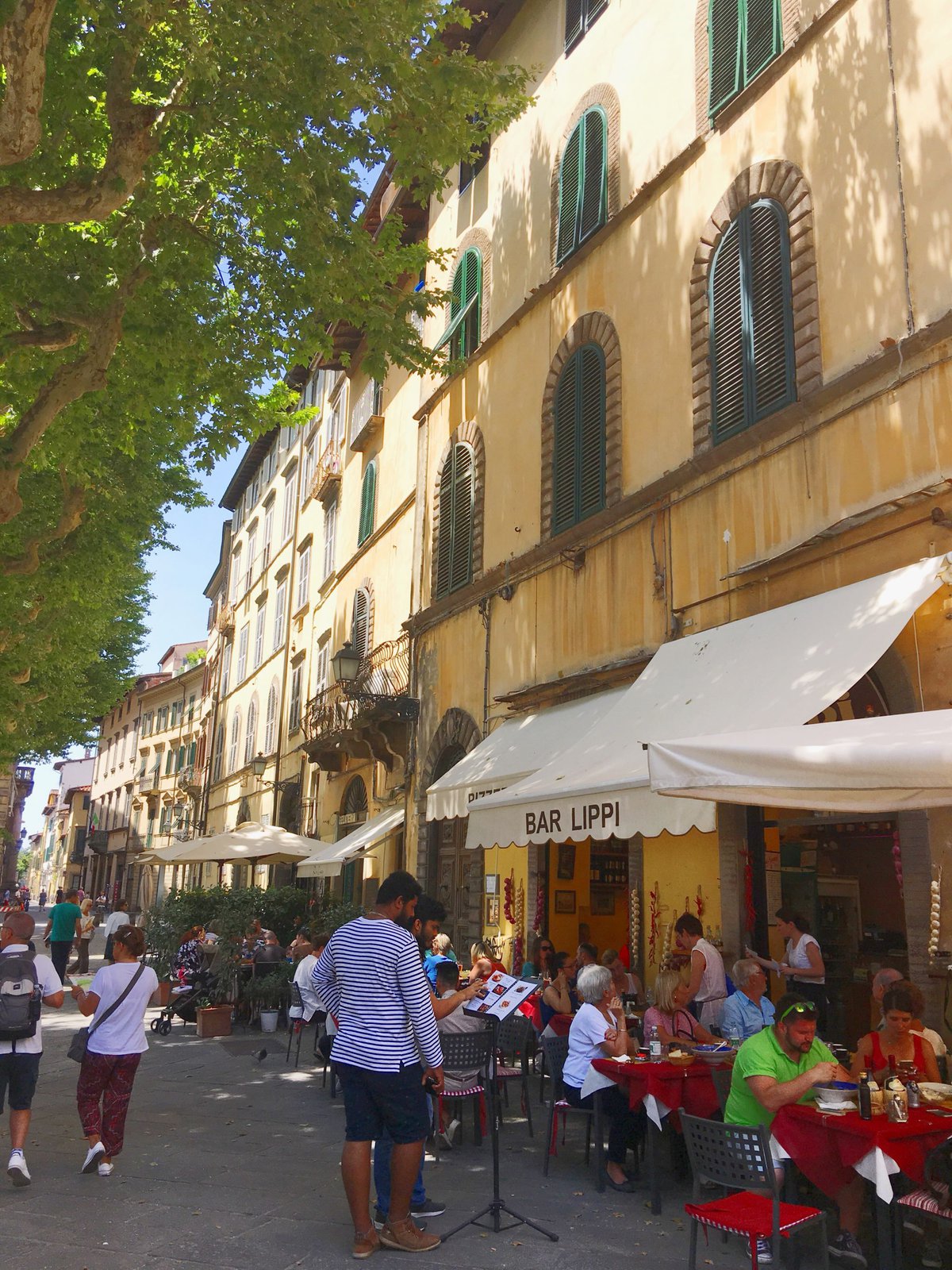 Buccellato is a local sweet bread/cake product with raisins. 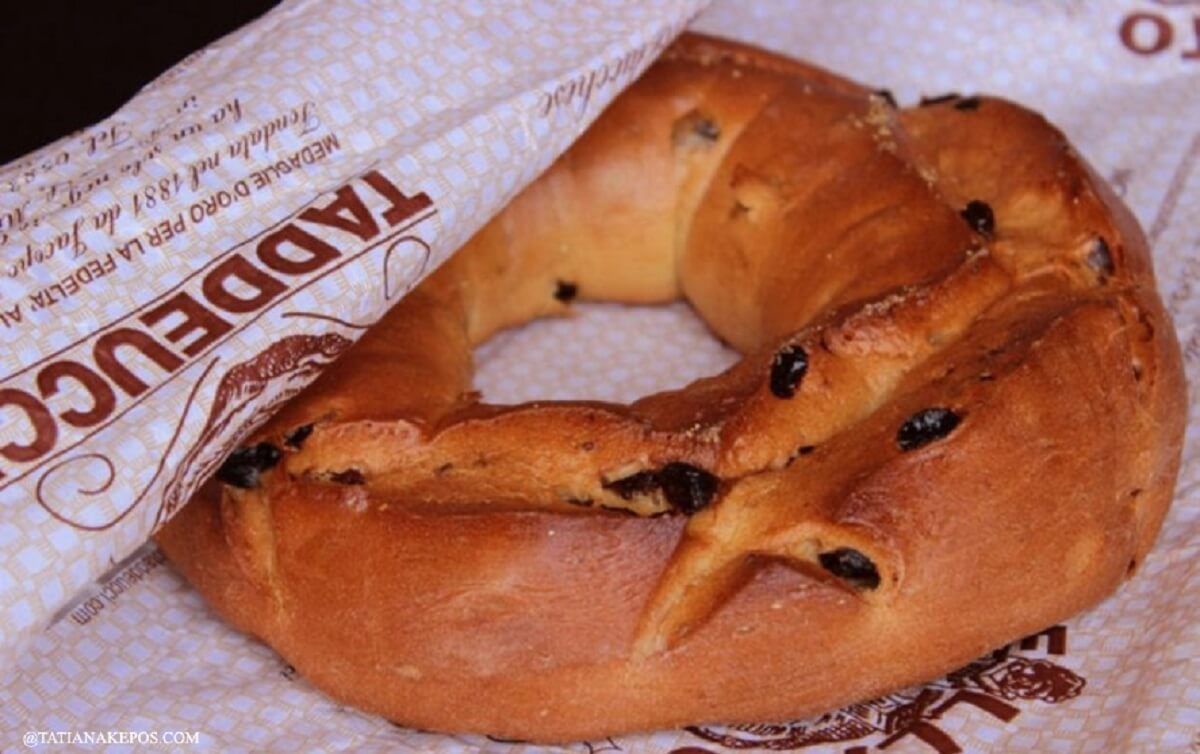 Traditionally it comes in a ring like a cake, but you can also find it in individual bars/buns at local bakeries.

Lovely as an afternoon snack after a long day of walking and climbing, buccellato is also a great breakfast food paired with a steaming hot cappuccino.

Walk or Bike The Wall

Of course one of the most famous things to do in Lucca is to enjoy walking or biking along the top of the wall! 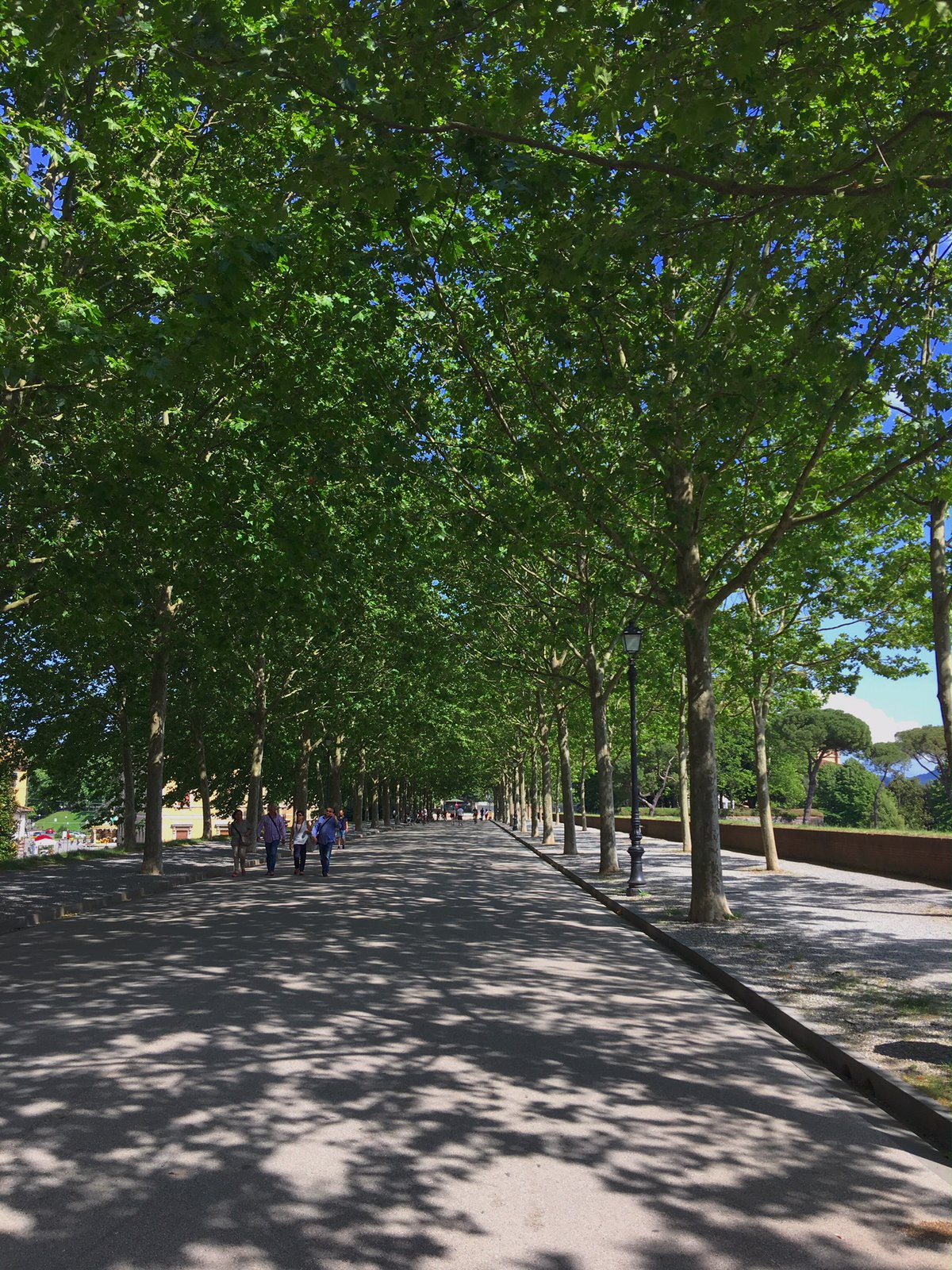 Tuscany has many walled towns and cities but the Lucca wall is perhaps the most renowned. What makes it so remarkable is its width (or breadth?) It is as wide as a road and is beautifully tree lined, making it a perfect escape from the summer heat. 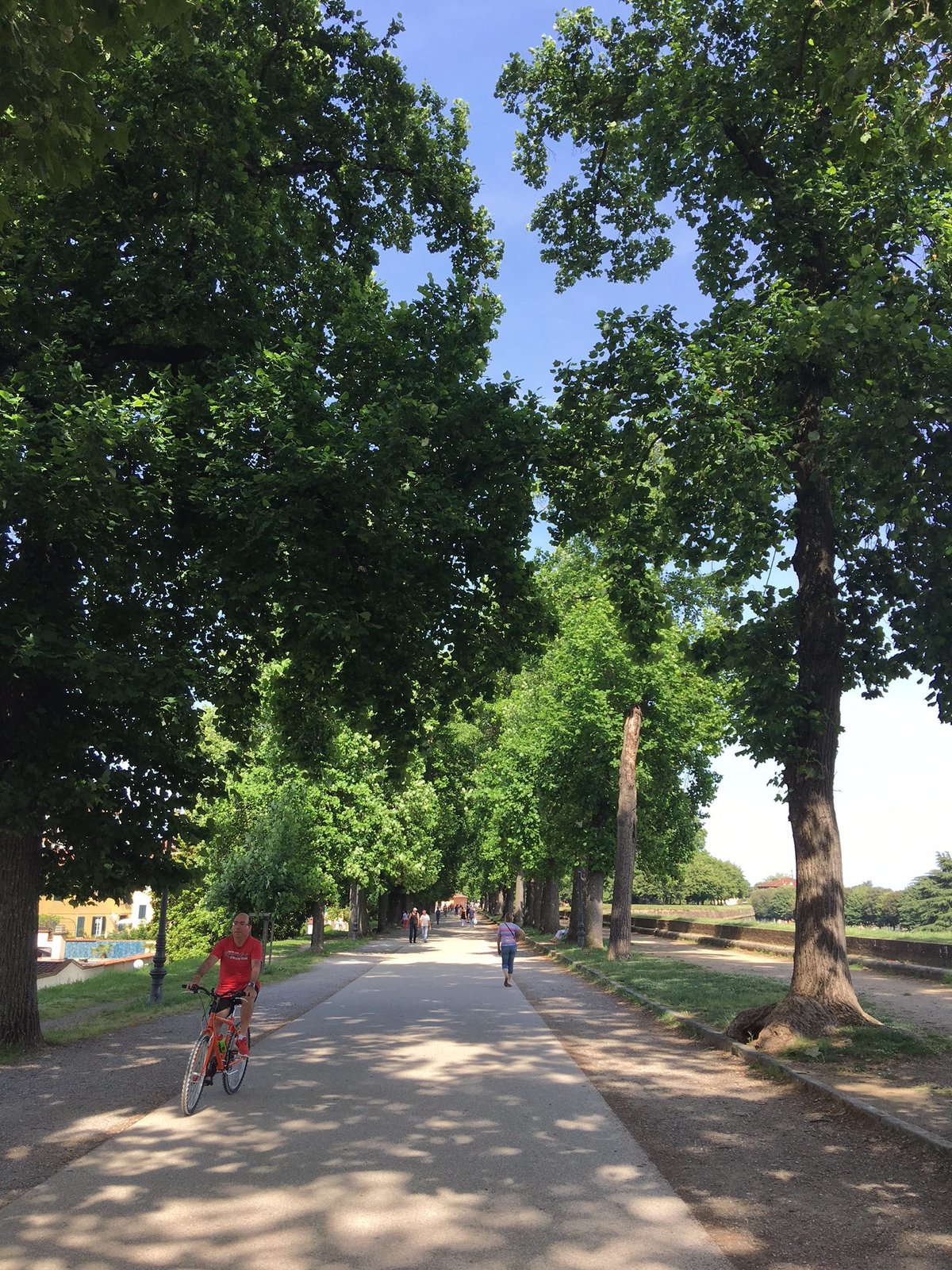 At any time of year you will see locals walking and biking the wall, and as a visitor this is a must! The wall is 4km circumference, ideal for a late afternoon stroll or bike ride. (You can rent bikes inside the wall at the edge of town.)

Wander Without an Agenda 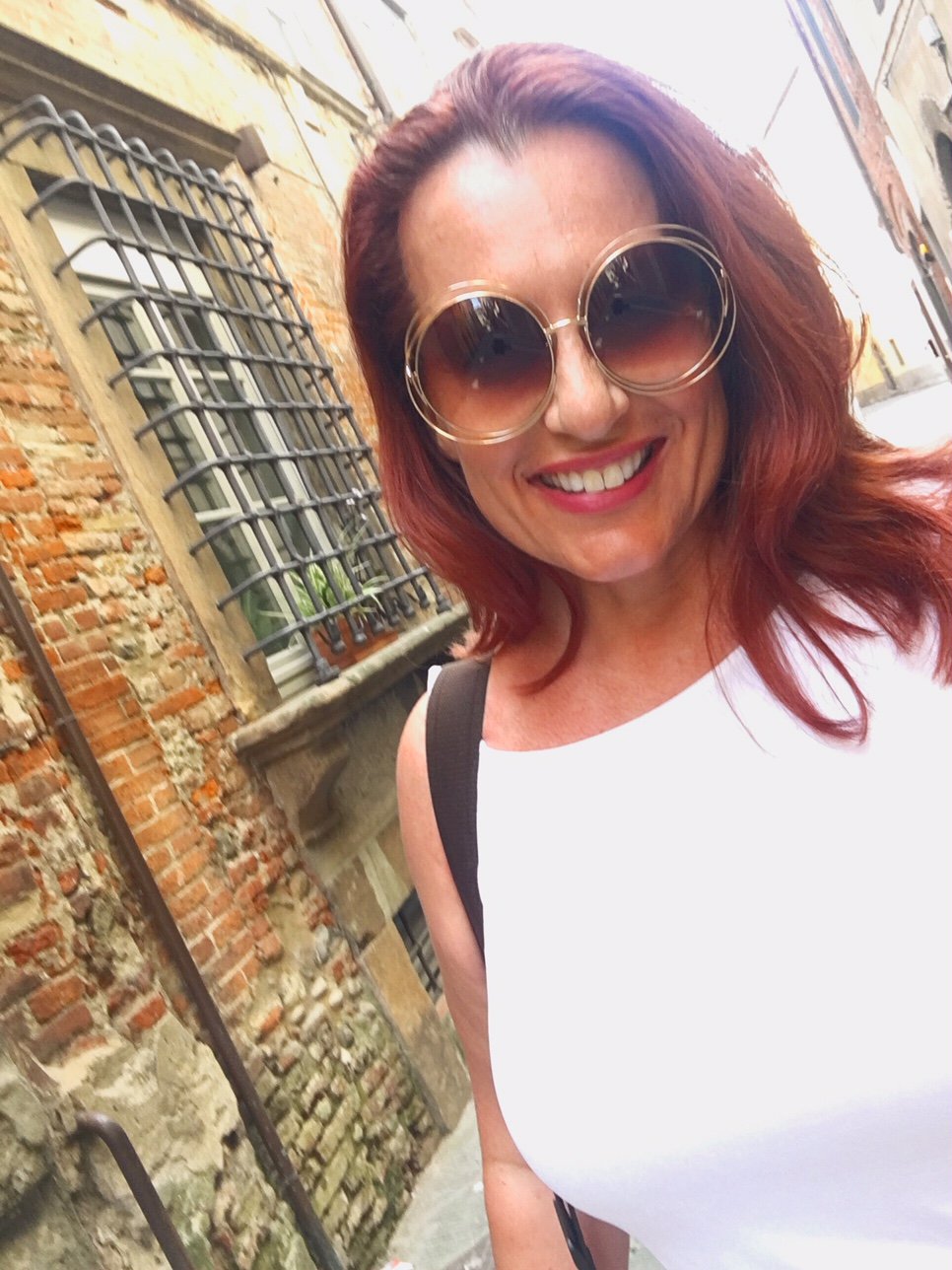 Lucca is a town best explored by wandering aimlessly. 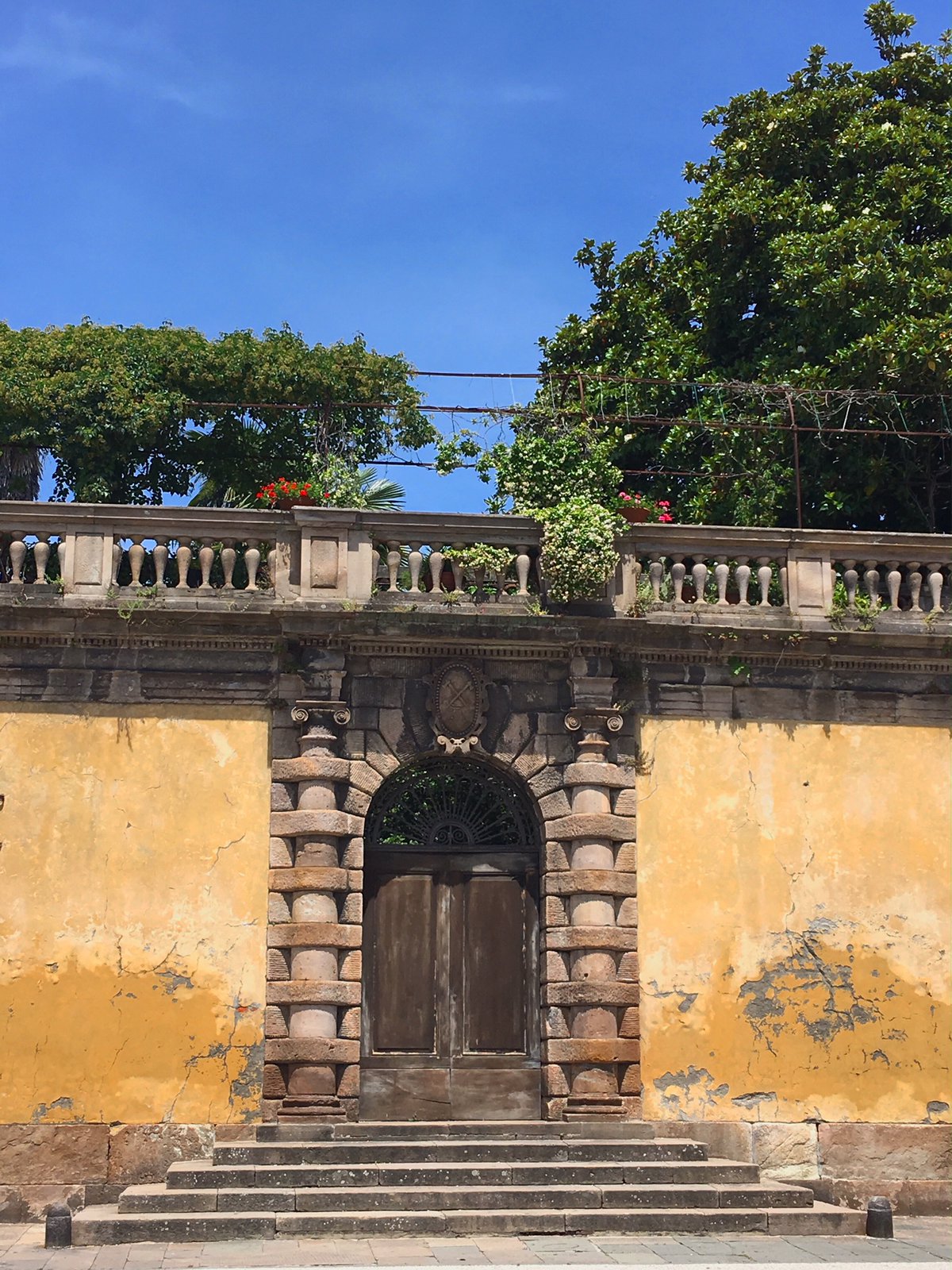 There is so much to discover down the little side streets, away from the main tourist sites. 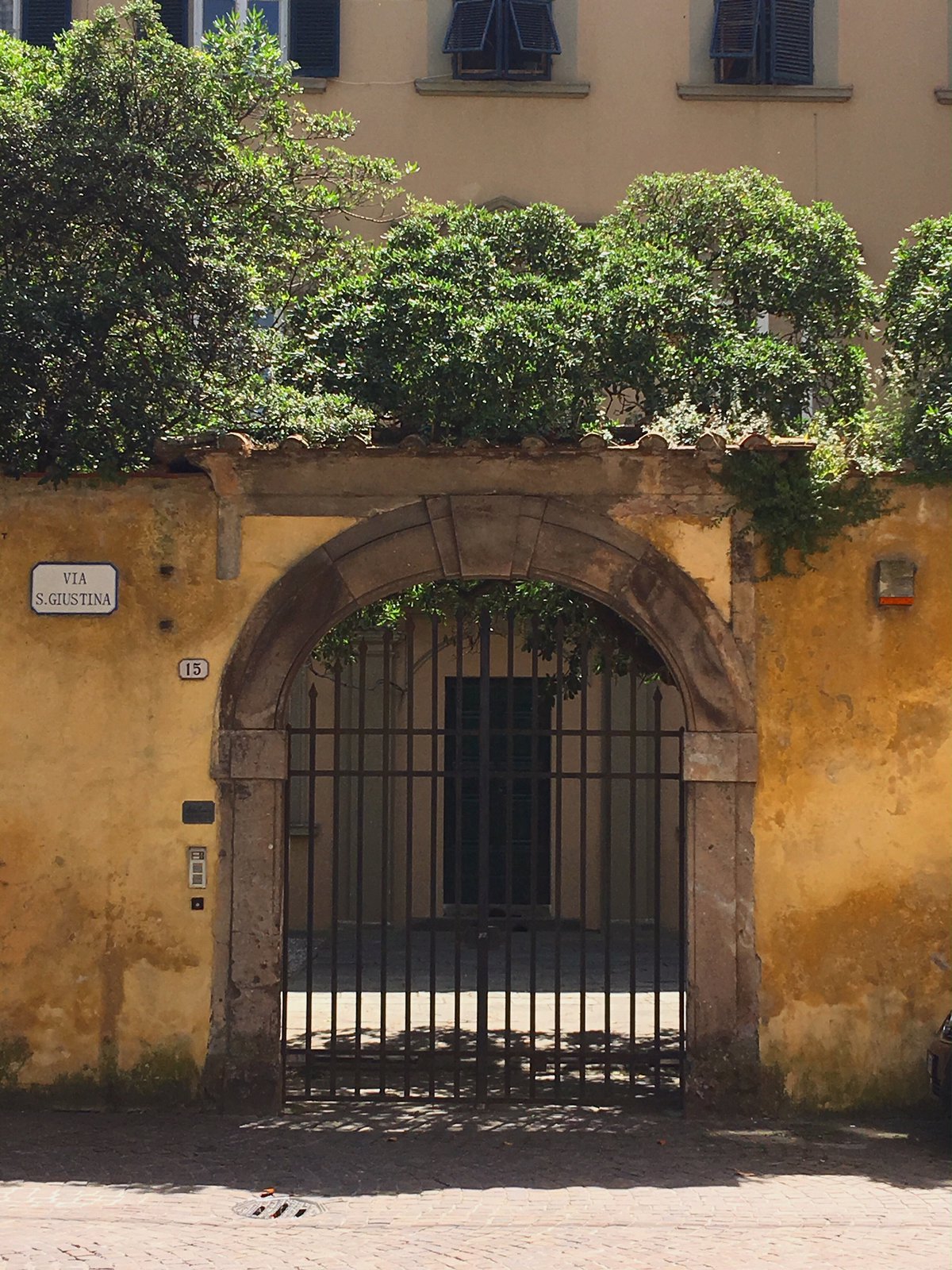 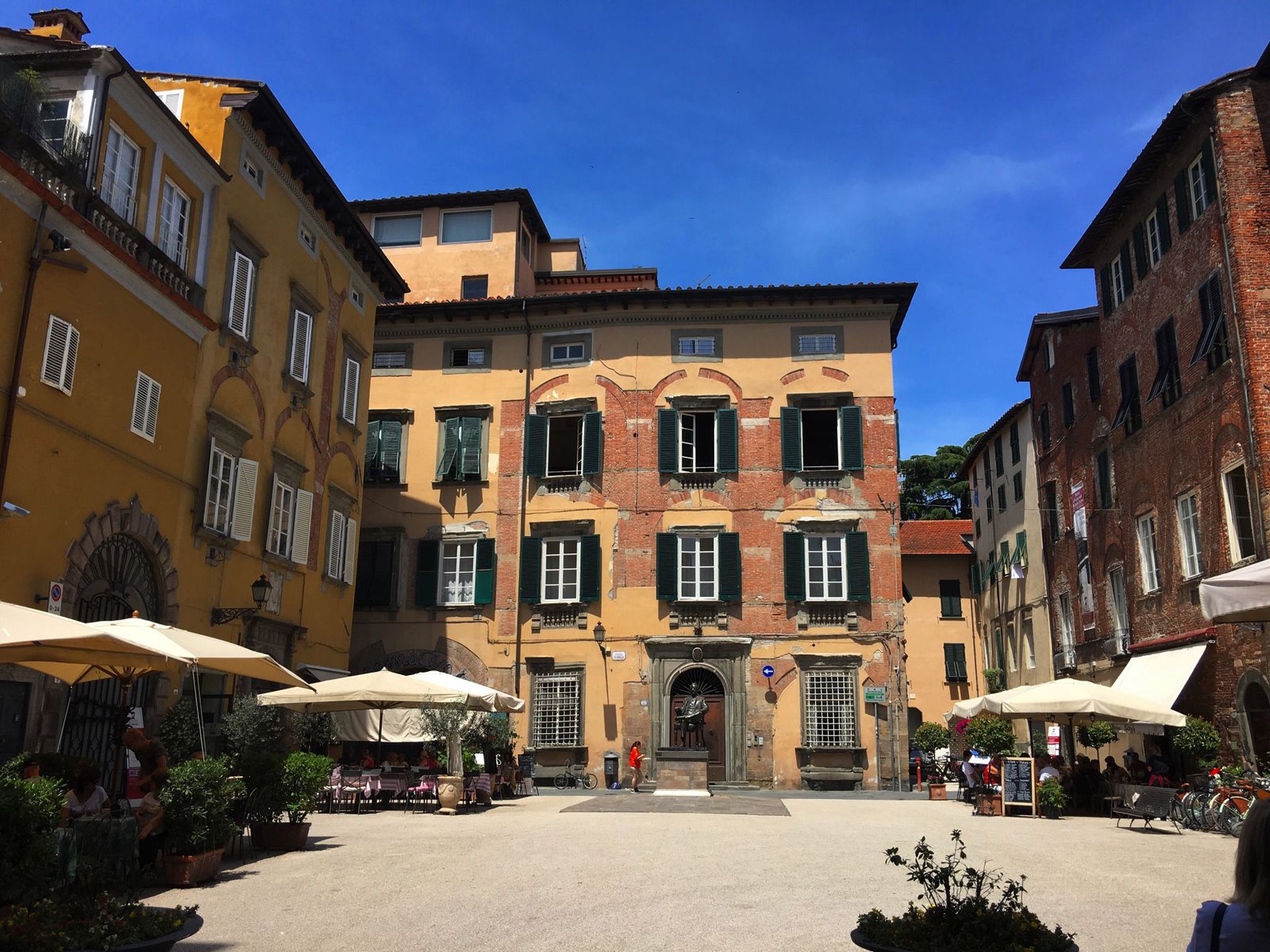 The town is small, and is ringed by the wall, so you really can’t get lost! Make sure you allow yourself plenty of time to discover the magic of Lucca on foot. 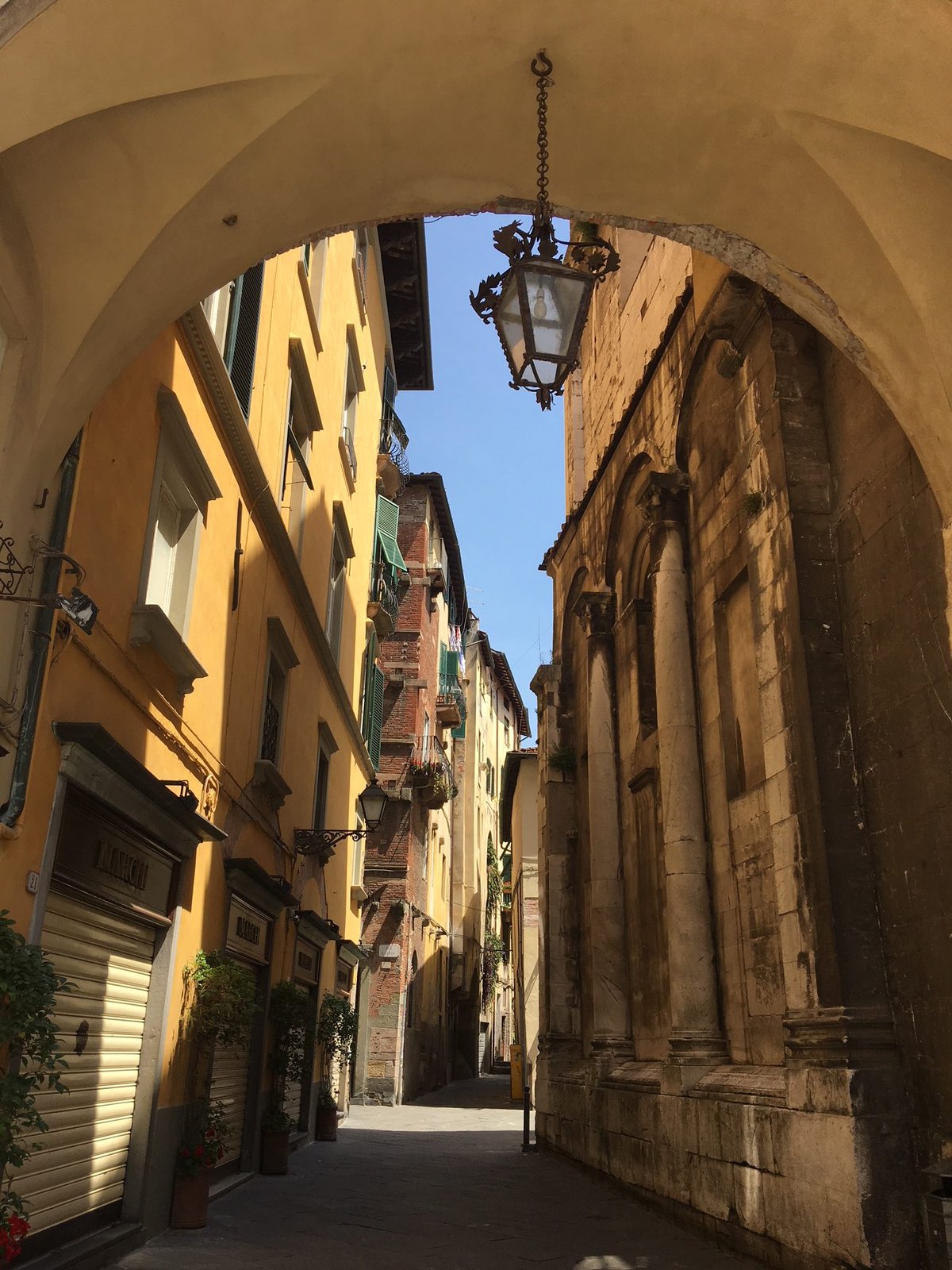