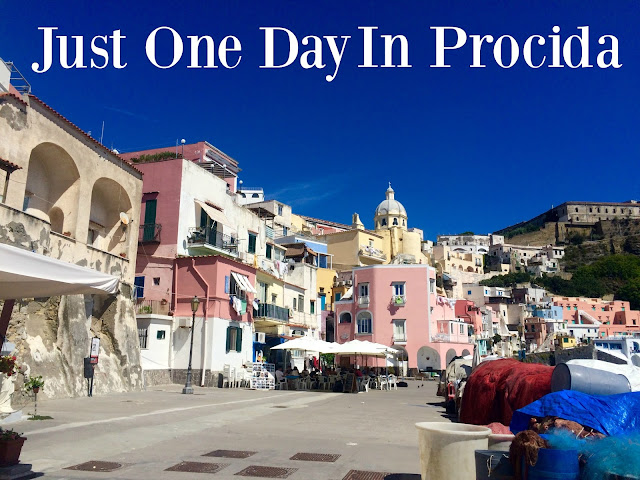 I have been to Capri many times, and loved it.
But lately Capri has felt less like the jet-set world of Jackie O, and more like the hellish realm of a disgorged cruise ship.

Capri is definitely chic. No question. But it has become horribly touristy. There is invariably a cruise ship or two in the harbor, and during the day the piazzetta can be a nightmare crush of humanity that you have to wade your way through in order to get anywhere. Somewhere along the way I started losing interest.

When I was planning this year’s Glam Italia Tour, which included a week on the Amalfi Coast I just couldn’t face taking anyone to Capri. I know I will go back at some point, but for now I have a new island love, and that love is called Procida.

Procida is the smallest island in the Bay of Naples’ Campanian Archipelago, at a mere 3.2 km long.

One of the 24 most colorful places in the world, Procida has attracted movie directors over and over as the setting for their films, so much of it may feel familiar to you.
(The movie Il Postino was shot on Procida and on the Aeolian island of Salina).

You get to Procida by ferry or hydrofoil from Naples, and the “wow” factor on arrival is just staggering. Out of the blue, blue ocean, set against the blue, blue sky erupts an explosion of color in the form of bright yellow and pink fishermen’s houses, that will take your breath away.

Procida feels authentic. A weekend retreat for the people of Naples, it doesn’t have the manic tourism and outdoor mall feel of nearby Capri.

Where to stay on Procida

I did spot one Tshirt shop while there, and I’m sure there must have been a couple more, but as you walk around town you feel as though you have stepped into some secret slice of shabby-chic Italian island life that hasn’t been polluted by major retailers and Chinese manufacturers.
It looks and feels real.

The streets are narrow and windy and in some places steep. You can spend hours just wandering around and exploring.

The perfect day trip to Procida would start by taking the very first ferry or hydrofoil from Naples.
Walk around the port area and have an espresso or two, then take your time and discover the streets as they weave and wind up the hill, working your way over to Corricella.

Related Post: 10 Things You Must Do On The Amalfi Coast

Marina Corricella, is a darling and picturesque sliver of a bay that backs onto a cliff made out of fisherman’s houses.

Fishing nets lie out to dry along the waterfront and fishing boats moor against the sea wall – did I mention it feels authentic??

Marina Corricella is the perfect place to stop for lunch. There are several oceanfront restaurants to choose from, but we wound up taking in the view from Bar Graziella. The hilarious and engaging owner Vincenzo opened Bar Graziella in 1964, and apparently was the first restaurant in Corricella.
The food is bountiful and inexpensive. We ordered a platter of seafood antipasti and a salad, supposedly an order for one person, but there was more than enough for 4!

After lunch walk along the eastern shore from Corricella to Chaia beach. You’ll take a long flight of stairs to the sand but you need the walk to burn off lunch.

When you are done beaching head either on foot or by bus up to Terra Murata and Abbazia di San Michele. You can check out the walled fortress which was at one time a monastery and until recently a prison, take in the stunning panoramic views of the Bay of Naples. Here from the highest point on the island you can walk down through the two stone gateways into the still inhabited idyllic settlement of Terra Murata. Wander around some more, and make sure you visit the art filled, romantic little church, Abbey of St Michael.

Sightseeing done, make your way back to the port and enjoy a locally made gelato before boarding your hydrofoil back to Napoli.

My only regret about the Glam Italia 2 Tour is that I allowed just one day in Procida.
Although the island is small, it is the perfect place to escape to. You can stay here for days on end doing nothing much at all. Evenings on Procida are said to be magic. This is the ideal spot to sneak away to with your Italian lover, or to plan a little romantic getaway.

Another place to stay on Procida (check out these photos!)

All images in this post apart from the one noted, were taken with my iPhone during the Glam Italia 2 Tour. Please do not use any of them without written permission from me.