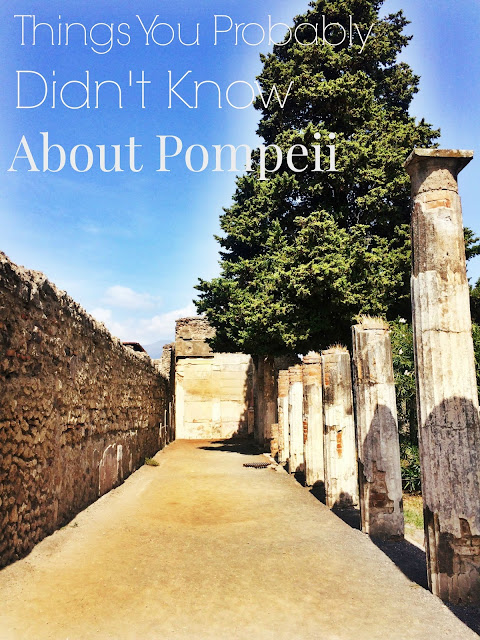 In 79 A.D Mount Vesuvius erupted. Ash and pumice rained down on Pompeii, an oceanfront merchant city at the bottom of the mountain, completely burying it. For the next 1700 years Pompeii disappeared off the face of the earth.

For 16 centuries stories were told about this mysterious town that had disappeared. Numerous expeditions set out to find it, but part of their problem was that they were searching the coastline, not realizing the eruption had moved the coastline 2 kilometres out to sea. The city was buried under 20 feet of volcanic ash, which had become verdant and fertile farmland. It wasn’t until the late 17th century when a farmer was digging a new well that Pompeii was onc again discovered.

I absolutely love going to Pompeii. Whenever possible I hire a local licensed guide. As often as I go there (several times per year with my tour groups) I still learn new things from my guide, every time. Pompeii is a live archaeological dig, so even if you have been before there are bound to be new things for you to see.

1. In A.D 62 a massive earthquake severely damaged Pompeii. The city’s rebuild was getting its finishing touches when Mt. Vesuvius erupted in A.D 79

2. There were no wealthy areas in Pompeii – rich and poor lived side by side. The city was designed to allow all citizens to live in comfort, regardless of income or social standing.

3. There was free bread for all – no one went hungry in Pompeii. To ensure against popular discontent the powers decided on “Bread and Circuses” or bread and games for all. Not only could citizens live without worries about food, they also were given free entertainment in the form of gladiator fights, with events happening up to 100 days per year.

People had free time to do other things, including creating great art.

4. Pompeii had a clever 3 tiered water system. One tier took water into the wealthier private homes, giving them running water. A second fed water into the city for sanitation, and a third fed the fountains. If there was a drought or if water was running scarce they would shut off the tier to the private homes first, then the sanitation water second, so that there would still be the third channel running, keeping water available for everyone to drink.
The problem was there was no sewer system, so waste flowed down the streets.

5. There were 42 water fountains in Pompeii, ensuring that no citizen had to walk more than 1 minute from home to get fresh, cool water. Some of them are still working, enabling visitors to fill their water bottles while walking around.

Taking long, relaxing baths was considered to be one of the greatest pleasures in life, and as such bathrooms were designed to be beautiful, with mosaic floors and frescoes walls.

8. Much is known about life in Pompeii through the graffiti on the walls. Paper was not widely available, so people would scratch messages into the walls with nails. Love notes, meetings, political aspirations, public announcements, missing persons notices, notes to neighbors, running bar tabs – all were perfectly preserved on the outdoor walls.

9. The citizens of Pompeii had no idea that Vesuvius was a volcano – it hadn’t erupted in 1800 years. Prior to the eruption there was no crater at the top of Vesuvius, instead it just looked like every other mountain in the area. Vesuvius had extremely fertile land which was well farmed, and had many communities living on it.

10. The wine shops/bars in Pompeii stayed open all night long.

11. There was 18 hours of pumice and ash raining down on Pompeii before the lava flowed.

12. This volcanic ash sealed bodies where they fell and then hardened, creating perfect human shaped forms. As the bodies decomposed they left hollow spaces in the hardened ash. Archeologists poured plaster into the hollows, creating casts that are so detailed you can see the moment of death in their faces.

13. Pompeii’s population was estimated to be between 15, 000.  It is estimated 2, 000 were killed. Which means most of the town’s people escaped in the days leading up to the eruption.

14. At the time of the eruption there was no word for volcano in latin.

15. Pompeii and it’s stretch of coastline were a popular resort area where wealthy Romans had their summer villas. The exuberant sex lives of the Romans, which were well documented in local art, lead the area to be known as the “Love Coast”. (I only recently read this last part, but if it is true, it’s pretty funny).

18. In the 16th century letters written by Pliny the Younger were discovered, describing the eruption as viewed from across the bay at Misenum where he watched with his uncle, Pliny the Elder. These letters give us an in depth account of how the events of the day progressed, including Pliny The Elder’s attempt to rescue friends from the beach at Herculaneum, which ultimately led to his death.

Pompeii is a suburb of Naples and is easy to access by train. You can make a day trip from Rome, or visit for a few hours from Sorrento or Salerno on the Amalfi Coast.